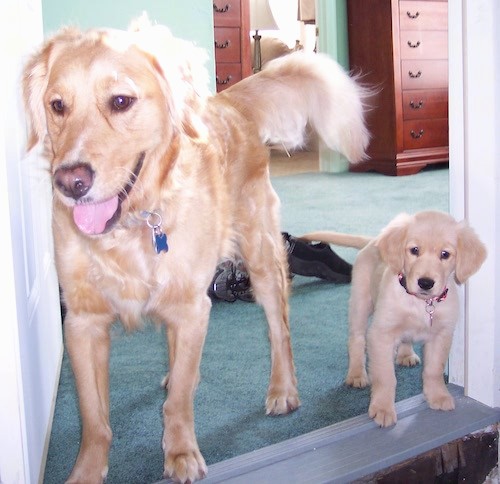 Golden Retrievers, Dakota at 2 years old with Daisy Mae as a 12-week-old puppy 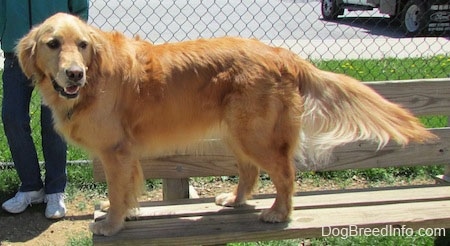 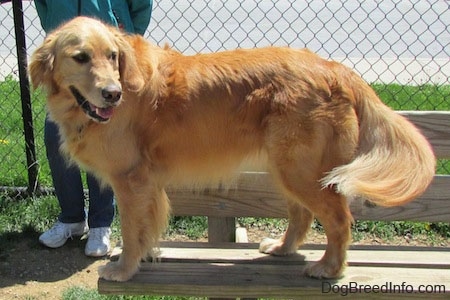 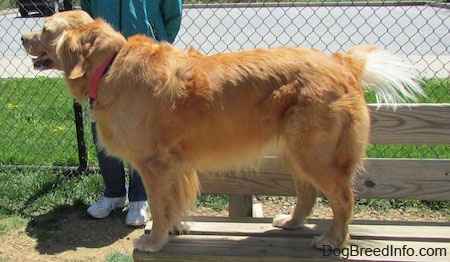 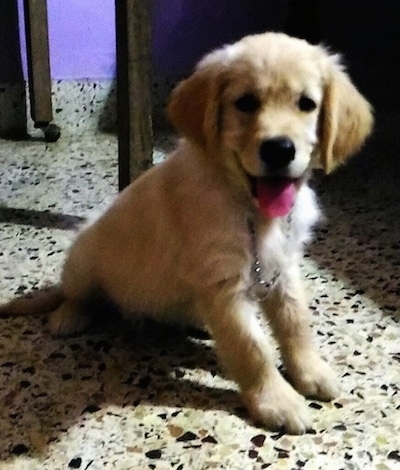 Gabby the Golden Retriever as a puppy at 2 months old from India—"I adopted her when she was 1 month old. At 2-months-old she weighed 7 kg (15 pounds). 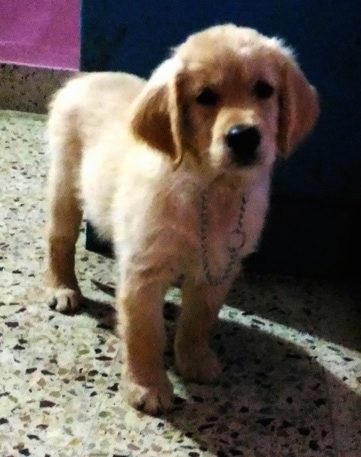 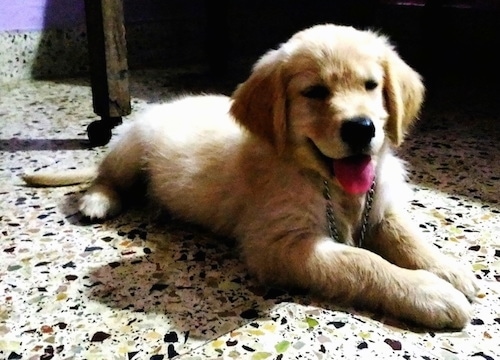 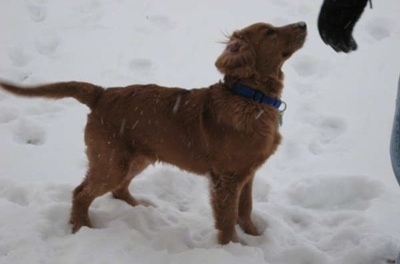 "This is our Golden CJ. He is a very intelligent dog and is only 7 months old in this picture. He knows the names of all 10 of his toys, loves playing ball, chasing bunnies, has figured out how to open all the pet gates in the house and last week he found out how to open his outdoor kennel and was running rampant through the neighborhood when we got home from work. He is very devoted and loves to do whatever the activities are with his family for the day. He has made friends quite quick with all the neighborhood dogs and children, but his favorite friend is our neighbor Springer Spaniel Digger. He was housebroken quickly in about two weeks, but still has an occasional, "I'm so excited, I can’t hold it in any longer when I see someone new" accident. He has never tried to chew on anything in the house unless it is edible, but he loves to lick everything in sight. He loves to dig and chew on feet, but we are working on that. We are installing a sandbox this summer in the yard for him to dig in and turning the chewing on feet into a fun 'pull our socks off' game. We live in North Dakota in a small town and have about a half an acre of land for him to run on. We take him for walks everyday unless it is bitterly cold and we let him run off his leash on those walks (we live in a small town and are surrounded by fields only about 5 blocks away). He loves playing catch in the house and hide-and-seek with us when we are not outside. The only things he hates are our neighbor's toys (I'm not sure on the exact breeds) and will hide behind us every time we walk past their yard." 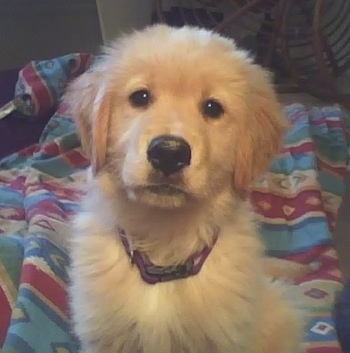 "Sam, my Goldie is 3 months here. He is the kindest little buddy anyone would ever want. If you "cry" like a dog, he can't stand it and has to lick you all over your face. If I'm happy, his tail wags like a helicopter. He's game for anything, at first with caution (swimming, big dogs, asparagus), and rushes over when I say "come here"—the most balanced dog I've ever had. Like Cesar teaches, I had to let him know who is the boss the first time he growled at me with a bone in his mouth. Ever since, he happily shares his treasures with me. He gets the run of the backyard most any time he wants, and especially loves Lake Frank, where he fetches sticks from the water and romps around the trail." 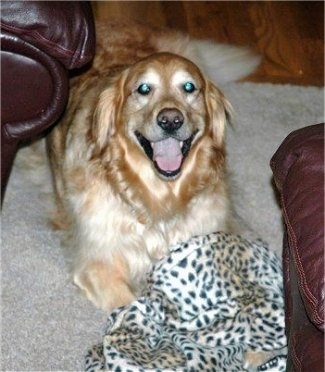 Midas the purebred Golden Retriever at 7 years old, weighing 90 lbs.—"We named him Midas from the fairytale of King Midas, who touched anything and it turned to gold. This is a picture of Midas lying with his leopard-skin blankie." 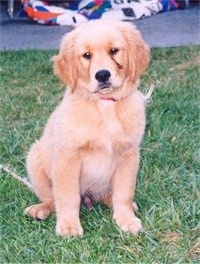 Charlie the Golden Retriever as a puppy at 3 months 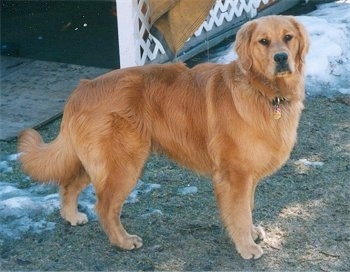 Charlie the Golden Retriever as an older puppy at 9 months 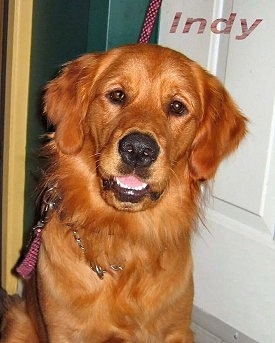 Indy the male Golden Retriever at 11 months old and 70 pounds (32 kg) was adopted at a local SPCA as he was abandoned. His owners say he is very playful, intelligent and after only one week was already a guardian of the house!!! 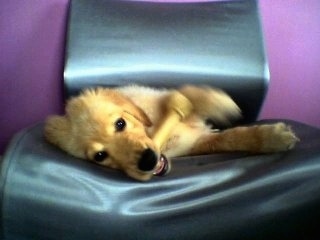 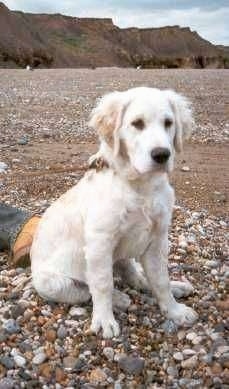 "This is Max. These photos were taken when he was about a year old. He'd never been to the beach before and was a bit scared of the water! His nose is black in these pictures, but after his first winter it turned pink!" 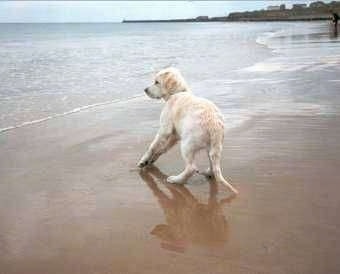 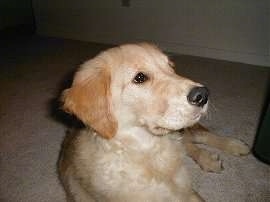 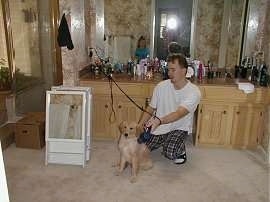 "This is Rex, a 3-month-old, 37-pound Golden. The first picture is Rex being a pretty boy; the second is him getting blow-dried after his bath. He loves the dryer since it's winter and it keeps him from getting cold." 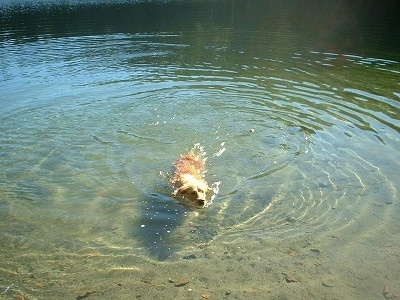 Maggy the Golden Retriever going for a swim in the water 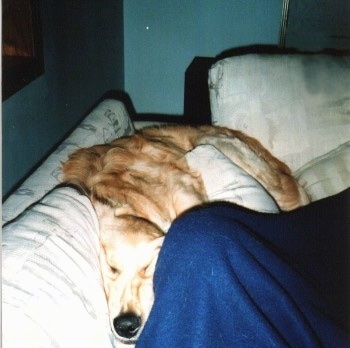 Cody crashing on the bed!