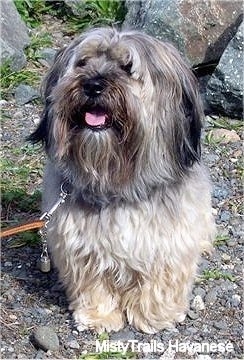 If never primped, clipped or altered in any way, the Havanese gives a rugged impression in a little dog. The legs are strong and allow for free and easy movement. The dark eyes and long tail are covered with long, silky hair. The profuse coat varies from wavy to curly to corded. The corded coat is recognized by both the AKC (American Kennel Club) and the CKC (Canadian Kennel Club). The Havanese is a double-coated breed with soft hair, both on the outer coat and undercoat. The adult coat reaches 6 to 8 inches, and has a pearly sheen. Some Havanese carry a shorthaired recessive gene. If two adults with this recessive gene have a litter of puppies, it is possible that some of the puppies will be born with smooth coats. A Havanese with a short coat cannot be shown, as it is a serious fault in the show arena. Some have nicknamed the Havanese born with short coats Shavanese. Eye rims, nose and lips are solid black on all colors except the true chocolate dog. The Havanese comes in any color, including cream, gold, white, silver, blue and black. Also parti and tricolor. In North America, all colors are recognized; no preference is given to one color over another. Black and chocolate are preferred colors with many North American breeders. A chocolate Havanese must retain at least a 1 inch (2.6 cm) patch of chocolate hair. Chocolates also have green or amber eyes. In some European countries the black and chocolate dogs were not always recognized, but the black dogs have been recognized for several years, and the chocolate dogs are now recently recognized. The gait is unique, lively and ”springy," which accentuates the happy character of the Havanese. Tail is carried up over the back when gaiting. The breed is of solid physical type and sound constitution. The Havanese is sturdy, and while a small breed, it is neither fragile nor overdone.

Havanese are natural companion dogs, gentle and responsive. They become very attached to their human families and are excellent with children. Very affectionate and playful with a high degree of intelligence, these cheerful dogs are very sociable and will get along with everyone including people, dogs, cats and other pets. They are easy to obedience train. This curious dog loves to observe what is going on. It is sensitive to the tone of one's voice and will not listen if it senses that it is stronger minded than its owner, however it will also not respond well to harsh discipline. Owners need to be calm, yet possess an air of natural authority. The Havanese has a long reputation of being a circus dog, probably because it learns quickly and enjoys doing things for people. Few tend to bark a lot, as they can be taught not to do this; it is not their nature to bark a lot. It is best to teach them not to bark unnecessarily while they are still young to prevent it from becoming a habit. Havanese are good watch dogs, making sure to alert you when a visitor arrives, but will quickly welcome the guest once it sees you welcome them. Some dogs that have not been properly socialized may exhibit a degree of shyness around strangers, but this is not characteristic of the breed. Havanese live for your every word and gesture. They should be neither timid nor aggressive—if they are, that is a result of a human who is not providing proper pack leadership and/or not treating the dog like a canine, but rather a human. The Havanese shows no cowardice, in spite of its size. Do not allow the Havanese to develop Small Dog Syndrome.

Havanese are good for apartment life. They are very active indoors and will do okay without a yard. Havanese are born to live in your home, and not in a patio or a kennel, but at the same time, they require plenty of exercise.

This playful little dog has an average demand for exercise. This breed needs to be taken on a daily walk. While walking be sure to make the dog heel on the lead. It is an instinct for a dog to migrate daily and to have a leader, and in their mind the leader leads the way. This is very important to raising a well-rounded, balanced pet.

For pets, the coat can be clipped short for easier care. If the coat is to be kept long it needs to be thoroughly brushed and combed at least twice a week. There is a lotion available to prevent the hair from splitting. Corded coats require special care. Dogs are not born with corded coats. It is a chosen groomed hair style. You can cord the coat or you can brush the coat. Without a human grooming the dogs the coats would be a matted mess. A drop coat is also a human controled style. Clip excess hair from between the pads of the feet. The feet themselves may be clipped to look round. Show dogs need a great deal more grooming. There is little to no shedding, so dead hair must be removed by brushing. Check the eyes and ears regularly. If the ears are not kept clean it is prone to get an ear infection. The beauty of a well groomed Havanese is that he still looks tousled and carefree. If you accustom your dog to nail clipping from puppy age, she should accept the routine as an adult. Teeth should be brushed weekly, and this is also best started as a puppy. This breed is good for allergy sufferers. They are a non-shedding, hypo-allergenic dog. However, the Shavanese (Havanese born with a short coat) which have coats more like the average dog and are comparable in looks to a Papillon, do shed. It is believed, but not yet 100% confirmed, that unlike the longhaired Havanese, the short haired Shavanese is not hypo-allergenic and therefore not a good choice for allergy sufferers.

Following the French, Cuban and Russian revolutions, the Havanese were almost extinct. Now rare in Cuba, the breed has been facing a crisis through the 1900s, but is presently on the rise in popularity, having some dedicated believers in the breed who are actively campaigning for its preservation in the USA. This dog belongs to the family of dogs called Bichons. The French word Bichon Frise means "fleecy dog" or "curly lap dog." "Bichon" refers to the bearded appearance of the breed, as the word "barbichon" means little beard, while the word "Frise" means curly. The Bichon Havanese originated in Cuba from an earlier breed known as Blanquito de la Habana (also called Havanese Silk Dog—a now extinct breed). The Bichon Havanese adorned and enlivened the homes of aristocratic Cubans during the 18th and 19th centuries. Bichon lapdogs were being brought to Cuba in 17th century from Europe; they adapted to climate and customs of Cuba. Eventually, these conditions gave birth to a different dog, smaller than its predecessors, with a completely white coat of a silkier texture. This dog was the Blanquito de la Habana. In the 19th century, the Cubans took to liking the French and German Poodles, which were crossed with the existing Blanquito to create today's Bichon Havanese. In the development of the Havanese, the Blanquito was much more dominant than the Poodle. The Bichon Havanese originated in the 19th century (1800-11899). It was continually bred in Cuba all through the 20th century (1900-1999) and was the preferred pet/dog of Cuban families. Breeding the Havanese in the USA only started in the 1970s. In the 1960s many Cubans migrated to USA. Most Cuban refugees settled in Florida and some brought their pets (Havanese). A U.S. breeder, Mrs. Goodale saved the breed from extinction. She advertised in a Florida paper, and found two or three immigrant families who had brought their Havanese from Cuba with papers. From them, Mrs. Goodale got 6 Bichon Havanese with pedigrees: a female with 4 female pups, and a young unrelated male. Later she was able to get 5 more males from Costa Rica. As an experienced breeder, Mrs. Goodale began working with the 11 dogs. Her first lines appeared in 1974. The UKC recognized them in 1991. The AKC recognized them in 1996. The CKC (Canadian Kennel Club) recognized them in 2001. Around 1980, several German breeders started finding odd-coated puppies in litters with regular Havanese. As these pups matured they did not grow full coats like their other littermates. They had feathering on the skirts, tail, legs, chest and ears—the rest of the body hair was close lying. They oddly enough grew up to have smooth coats. Breeders got together and found that this was happening in other litters of Havanese and was not a chance genetic mutation in one single litter, but something carried in a lot of Havanese as a recessive gene. These dogs were called smooth-coated Havanese, but have picked up the name Shavanese somewhere along the line. The short-coated Havanese are not showable or breedable, however they are perfectly healthy. 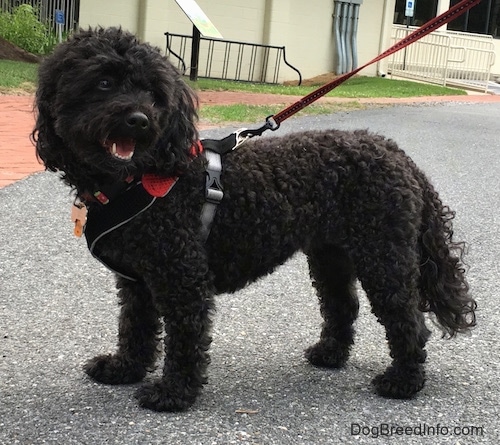 Jazz the curly-coated Havanese with his coat groomed short. 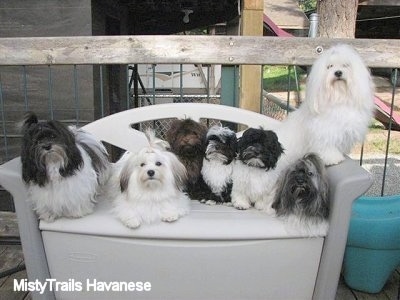 The crew at MistyTrails Havanese—Reo at 1.5 years, Conchita at 1 year, Purdy at 4 months, Lucy and Splash at 3 months, Sebastion at 3 years and Catreeya at 4 years old 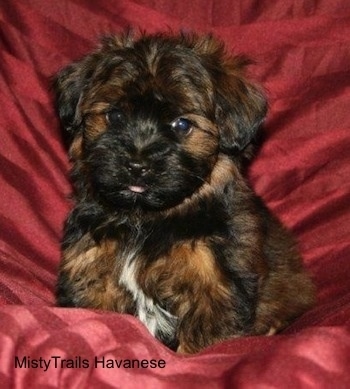 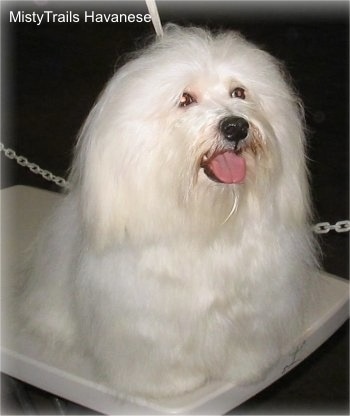 Zorro, submitted by MistyTrails Havanese—Zorro's sire is from Spain. This dog completely conforms to the CKC and AKC standard for Havanese. 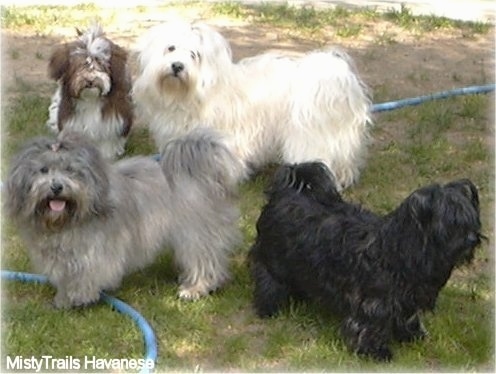 Examples of chocolate parti, white, blue pewter, and black Havanese. Two of the rarest colors in the Havanese breed are the blue pewter and chocolate parti. Those colors and the black were originally not part of the breed standard. Photo courtesy of MistyTrails Havanese and Elite Havanese 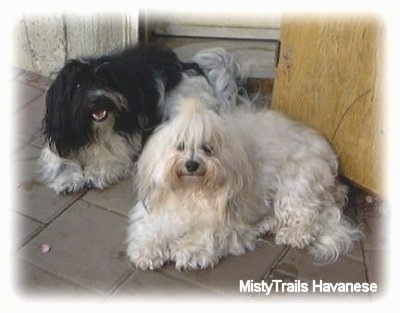 Pablo with Salida; Salida is a pure Cuban Havanese, imported and owned by Alida Wasmuth, photo courtesy of MistyTrails Havanese 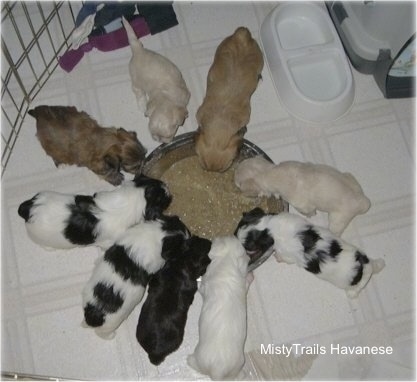 Havanese can have one puppy in a single litter; the normal is 3, 4, or 5 puppies. Six is considered a large litter for a Havanese. I have had several 7-puppy litters, a couple 8-puppy litters and one 9-puppy litter. Photo courtesy of MistyTrails Havanese 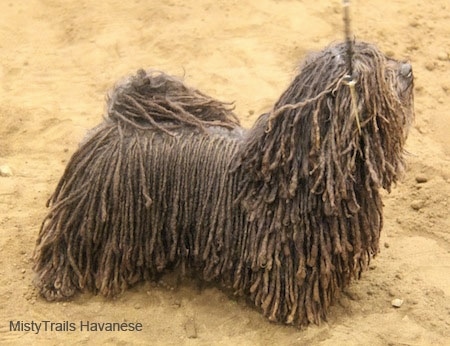 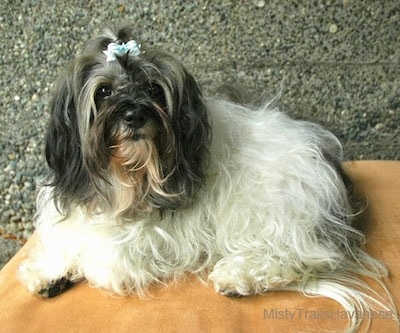 Catreeya at 10 years old—"She is the mother of 11 Champion puppies and won the Best Veteran in Specialty Show. She was bred by MistyTrails Havanese." Owned and loved by Steven Ballantyne

See more examples of the Havanese