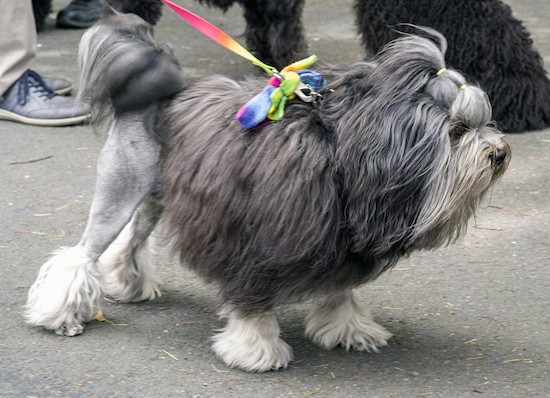 The Löwchen, also called the Little Lion, is a small dog whose coat is often cut to resemble the look of a lion. The head is short with a broad skull. The muzzle is the same length or slightly shorter than the back skull and is relatively broad. The nose is dark, usually black. The eyes are round, dark and set well into the skull. The ears are pendant in shape and moderate in length with feathering. The short body is well proportioned. The tail is set high and of medium length. The coat is long and wavy, but not curly. The most popular colors are white, black and lemon but it can also come in a speckled coloring. When clipped to look like a lion, the hindquarters, the section of the tail closest to the body and part of the front legs are closely clipped. When the coat is not clipped, it is long, rather dense and moderately soft in texture.

The Löwchen is a cheerful, lively, affectionate dog. Sociable and intelligent, it is eager to learn. These dogs are fearless, but gentle and sensitive. Löwchen usually learn quickly and present little difficulty in their training. Playful, they are good with children and usually will do okay with other dogs as well as non-canine pets. Its lion-cut coat makes it look fragile and rather undignified, although this is definitely not the case. The Löwchen is a robust, even tough, dog that can be strong-willed and arrogant if the owner does not display proper leadership toward the dog. Without this leadership, males, in particular, are quite willing to challenge other large household dogs for leadership. A lot of times they will usually be "top dog" even though they are not the biggest dog in the house. If necessary it will defend its house with intense barking. They are not hyperactive, but some may bark or dig a lot. Make sure you are this dog’s firm, confident, consistent pack leader to avoid Small Dog Syndrome, human induced behavior problems. Always remember, dogs are canines, not humans. Be sure to meet their natural instincts as animals.

This is a generally healthy breed, although some lines are prone to patellar luxation.

The Löwchen is good for apartment life. It is very active indoors and will do okay without a yard.

The Löwchen needs a daily walk. Play will take care of a lot of its exercise needs, however, as with all breeds, play will not fulfill their primal instinct to walk. Dogs that do not get to go on daily walks are more likely to display behavior problems. They will also enjoy a good romp in a safe, open area off lead, such as a large, fenced-in yard.

To prevent tangles from forming, the coat should be combed and brushed regularly. The Löwchen is usually clipped in the hindquarters, the section of the tail closest to the body, and front leg areas are close-clipped, regardless of whether they are shown or not, giving them the name "Little Lion Dog," although some owners prefer to give it a puppy clip. This breed sheds little to no hair. Dead hair should be brushed out. This breed is good for allergy sufferers.

The Löwchen originated in Europe around 400 years ago; most likely in Germany as the name Löwchen means "little lion" in German. It was groomed to look like a little lion and its exposed skin was often used as a foot warmer for the ladies. The breed was popular in Germany, Spain, France and Italy in the 1500s and continued throughout the 1800s. Like a lot of breeds, the numbers dwindled after the two world wars. It was named the "rarest breed" in the Guinness Book of World records in the early 1960s. Numbers have risen enough to take that title away from it, however it is still considered rare. The Löwchen was recognized by the AKC in 1996. 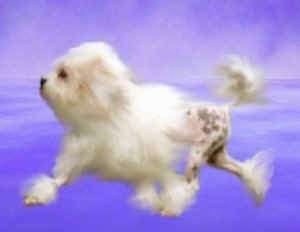 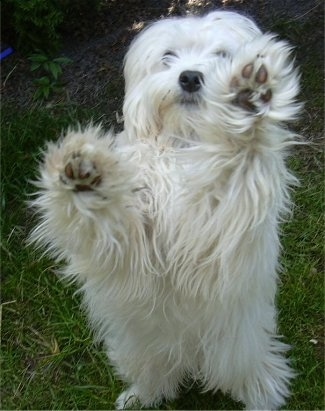 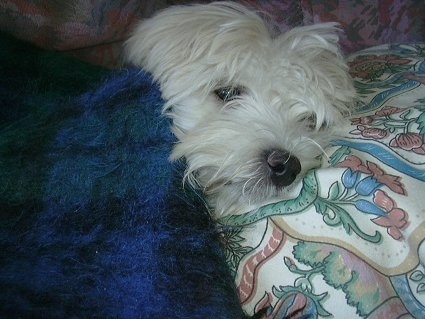 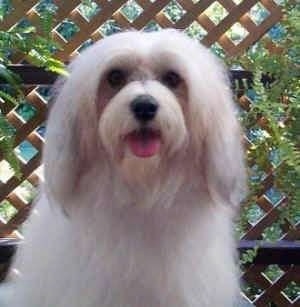 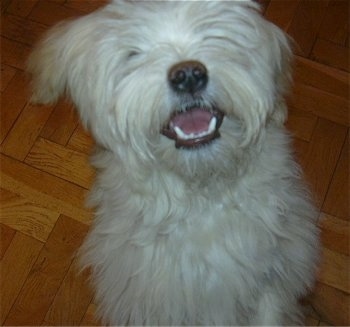 See more examples of the Lowchen