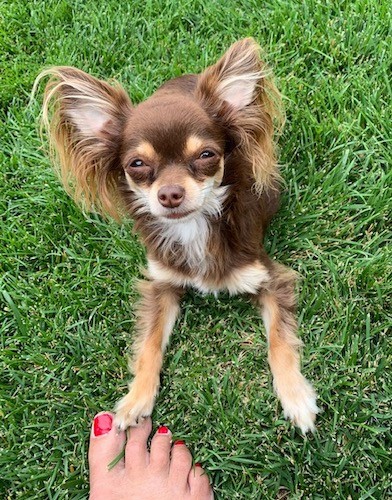 Russian Toys, also called Russkiy Toys, are toy-sized dogs. It is a very special looking breed. It is one of the smallest breeds in the world, and it can be either longhaired or smooth-haired. Smooth-haired Russian Toy Terriers look like little deer. They have four long legs, a strong body, a long neck, and a small head with a little muzzle, big smart eyes and large stand-up triangular ears. The Longhaired Russian Toy, also known as the Russian Toy Terrier and the Moscow Longhaired Toy Terrier is a copy of the smooth-haired variety and differs only because of the beautiful long fur on its ears. If you see a Longhaired Russian Toy you will be really impressed. Short coat all over the body and these ears looking like a butterfly? You will never find another dog making such an effect! Both varieties can be crossed and have longhaired and smooth-haired pups at the same litter, however a couple of smooth-haired toys can give a longhaired pup in their litter (like at the very beginning of the breed) but two longhaired toys never-ever will give birth to a smooth-haired variety. For top show Russian Toy the most widespread colors are black and tan, red (from light to deep) and sable in both long and smooth hair varieties. You may also find brown and tan, rare in Longhaired Russian Toys, and blue and tan, the rareest color. The Russian Toy of breed quality can have little white spots on the chest and toes and pets can be solid black, brown or blue (except red). This doesn't mean that red color Russian Toy Terrier cannot be of pet quality. But it will not be because of color. White color is prohibited. This breed has a small head and a small nose is either black or matches with the dog's color. The stop is clearly defined. The skull is quite high but not too wide (width at the level of cheekbones does not exceed the skull height). The muzzle is lean and pointed, slightly shorter than the skull. The lips are thin, lean, tight and dark or matching with the color. Jaws/teeth are small and white. It has a scissor bite - six incisors on upper and lower jaws are desirable. The eyes are quite big, rounded, a bit prominent, set well apart and straight, dark. Eyelids are dark or matching with the color, tight-fitting. The ears are big, thin, set high, upstanding. The neck is long, lean, set high, slightly curved. The chest is quite deep, not too wide, oval-shaped. The tail is shortly docked (only two or three vertebrae are left), gaily curried high. In countries where tail docking is prohibited by law, it can be left in its natural state. It should be carried a little higher than the level of back, desirable of sickle curve.

A loving, intelligent, trustful companion for you and your family. You will fall in love instantly, and the only problem your RTT will create immediately upon arrival will be that he will make you want another one. Agile, hardy, lifetime devoted to the owner—this is how Russian Toy owners describe their dogs. Small, elegant dog, tall on legs, of square build. Active, very lively, neither shy nor vicious, these dogs are said to be easy to train. Obedience training is recommended for any dog size. RTTs are fun to work in agility trials. A true companion dog. Would love to go with you everywhere and due to his size you can take him. Enjoys participating in anything you do. Make sure you are this dog's firm, confident, consistent pack leader to avoid Small Dog Syndrome, human induced behavior problems. Always remember, dogs are canines, not humans. Be sure to meet their natural instincts as animals.

Although it is tempting to carry these dainty creatures about, these are active little dogs that need a daily walk. Play will take care of a lot of their exercise needs, however, as with all breeds, play will not fulfill their primal instinct to walk. Dogs that do not get to go on daily walks are more likely to display a wide array of behavior problems. They will also enjoy a good romp in a safe, open area off lead, such as a large, fenced-in yard. Don't think that just because he is small he should be confined to a small space.

The smooth, shorthaired coat should be gently brushed occasionally or simply wiped over with a damp cloth. The long coat should be brushed daily with a soft bristle brush. Bathe both types about once per month, taking care not to get water in the ears. Check the ears regularly and keep the nails trimmed. This breed is an average shedder.

At the beginning of the 20th century, the English Toy Terrier was one of the most popular decorative dogs in Russia. However, in the period 1920 – 1950, shipping of toy terriers was almost stopped and the number of dogs fell to a critical level. Only in the mid-fifties did Russian dog breeders begin the rebirth of the breed. Practically all dogs which were used in breeding had no pedigrees; many of them were not of pure blood. The standard established for the Toy Terrier significantly differed from the English Toy Terrier's standard in many aspects. From this moment, the evolution of the breed in Russia went its own way. On October 12, 1958, two smooth-haired dogs, one of which had a slightly longer hair, gave life to a male dog with a spectacular fringe on its ears and limbs. The decision was made to keep this characteristic. The male was mated with a female dog which also had a slightly long hair. So the longhaired variant of the toy terrier appeared. It was called Moscow Longhaired Toy Terrier. A dog breeder from Moscow, Yevgueniya Fominichna Zharova played an important role in creation of this breed variant. The long isolated evolution and specific selection process have resulted in the creation of a new breed, the Russian Toy of two types: longhaired and smooth-haired. 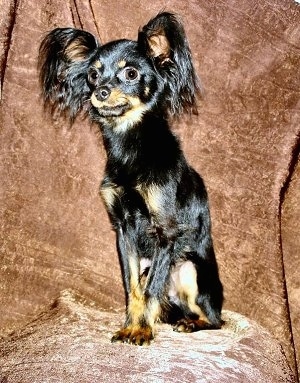 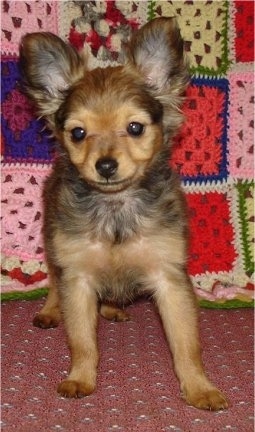 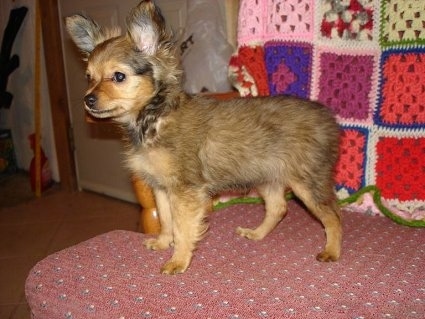 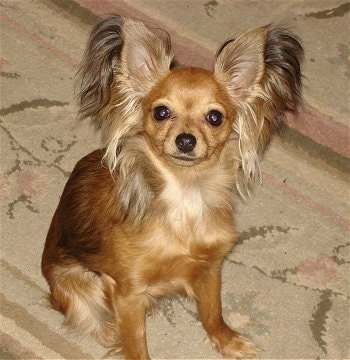 "This is Sassafras Moccasins, a Russian Toy Longhair, all grown up at a year and a half old, and a wonderful friend." 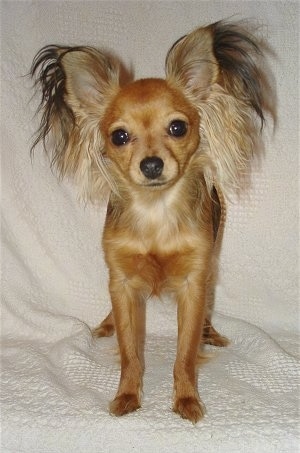 Sassafras Moccasins, a Russian Toy Longhair, all grown up at 1½ years old 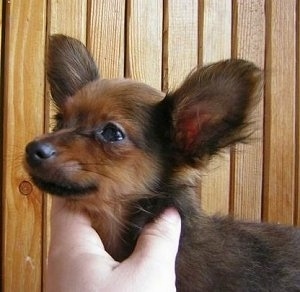 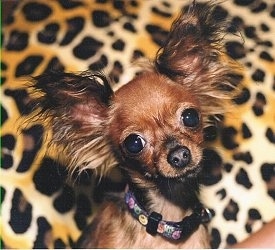 This is Anastasia, owned by Patricia Parker-Owen. 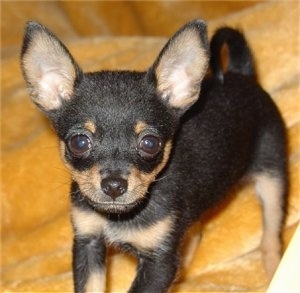 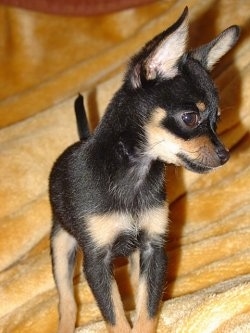