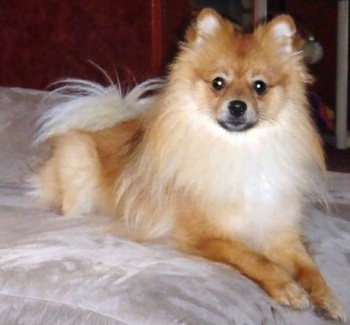 "These are photos I took of my little Charlie at 1 year old. I felt that I could keep his memory alive if I could just get a few pictures out there of him. He was killed this morning by a larger dog and I can't tell you how my heart is hurting. He was a delight to be around and I loved him from the moment I saw him. He was born on December 23, 2006 and died March 23, 2008. He had a terrible habit of jetting out the front door if it was opened without a strict command to him to "stay," to which usually he'd drop his head in disappointment. The front door was his road to freedom and once he was out, there was no stopping him. He'd spend twenty minutes or so marking the neighborhood and scaring me half to death while I watched in fright as cars dodged him as he ran back and forth across the street. The only way I ever found to avoid this was to command him to stay and reward him when he came back. After months of frustration he finally stopped running out the front door. Last night, he found a 3-inch gap at the base of the fence gate and wiggled himself through it. I looked for him for hours knowing very well he was hurt somewhere. He was found this morning by our back gate, the one place I didn't look. It appears that he got a little too close to a large dog that is tied up to a box living at the neighbors. The dog has always been known by my family as dangerous, but I never thought my Charlie would be dumb enough to get that close to him. I was wrong and I will be eternally guilted by it. Sometimes you just can't protect the ones you love."

"Enough of that sadness. I will grieve through explaining Charlie and how wonderful he really was. Charlie was rotten. He knew he was faster than me and if he got within an arm’s reach he was gone. He sometimes rummaged through trash he shouldn't be in. He refused to be potty trained to go outside for the first year of his life, and one day it just clicked in his head and I never had a problem again. It's so frustrating to try so hard and really have no effect. It's like potty training a 3 year old...they go when they're ready. I delayed getting Charlie fixed because I wanted more than anything to have offspring for him. I think this had a lot to do with his marking the neighborhood but I wanted that beautiful dog to have a legacy. Sadly, Charlie died so young and my dream was crushed.

“Charlie loved to hang out in my bathroom while I showered or took a bath. Sometimes he'd lean over the bathtub to drink the warm water. I found this to be gross but I loved it so much, and it was cute. He loved to drink out of the tap in the bathtub regardless of how much water he had in his bowl. Charlie loved children, though sometimes would be annoyed when my little girl would pick him up by his hind legs. She was always scolded as I don't think a child should be taught to give ANY dog a reason to bite them. Not all dogs are as cooperative as Charlie. His temperament was awesome and I don't think I could have asked for a more loving dog. Just this past week, he hopped up on my bed, flopped over on me upside-down and threw his legs in the air. He looked up at me with those big, dreamy puppy-dog eyes as if he wanted something. I started to pet him and he fell asleep in a few seconds. He has never done this and I thought it was so cute.

“Charlie was not very obedient but I don't believe that was his fault or a result of his breed. He refused to come when I called, but only when he was far enough away he knew I couldn't catch him. He barked like crazy when someone came to our front door but was hushed quickly and went back to what he was doing. That was something I loved about him. He is a classic "yippie" dog breed but he never really barked. Besides, I like that he protected his family and property.

“Some of the most adorable things Charlie did: When he was scolded or sent outside and didn't want to go, sometimes I would walk up to him and say "Charlie, you need to go outside." Then, I'd nudge him with my foot. Well, he had been lifting up his front paw and swatting me, ever so gently, away before I even get my foot up. I wish I had it on video now that he is gone because it's one of the most adorable things I have ever seen.

“Also, when he needed to go out, he'd stand right beside you like a statue for as long as it took for you to look at him. Then if you looked at him, he'd perk up, almost smiling. If you asked him if he needed to go out, his "yes" was a really quick spin in a circle. My mom always thought it was funny because he'd do it 10 times if she asked him 10 times. :)

“Charlie never met anyone who didn't fall absolutely in love with him. He was the perfect dog for me and my husband, who adored him as much as I do. He will be forever missed.” 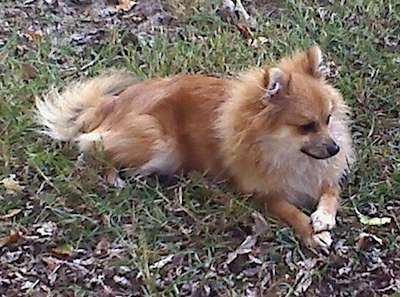 "This is our Pomeranian Hunter. He will be 1 year old on April 5, 2011. He is a great dog and very laid back. To the person with the Pomeranian on here named Charlie that passed away in 2008, I am sorry for your loss. My husband found the picture of your dog and we both thought it was our Hunter at first." 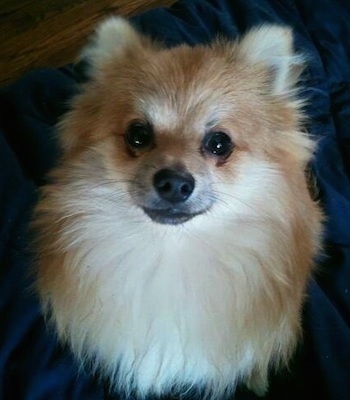 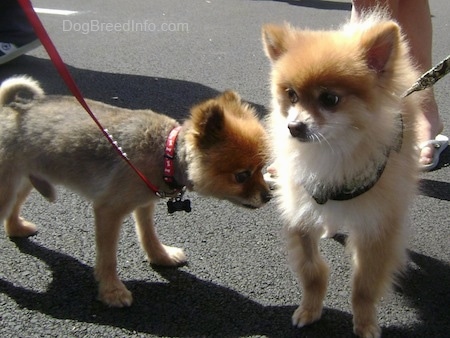 Bently and Bubbie the toy Pomeranians at a flea market 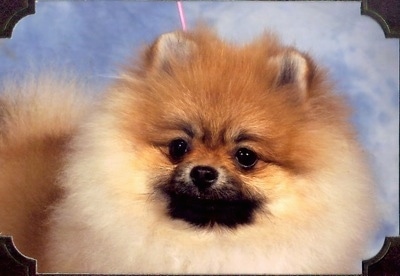 Pommania Cherish aka Maria, my princess, is the mother of P Diddy and Twisted Logic. She is shown here as a pup at 6 months old. Photo courtesy of Pommania Pomeranians 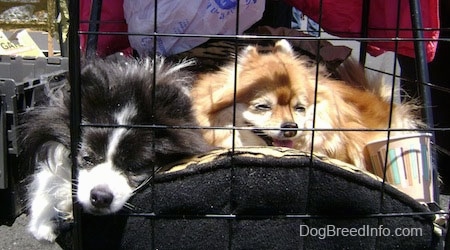 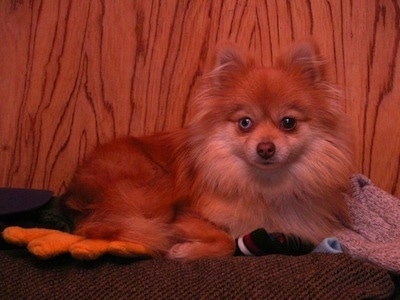 "Maddie the Pomerainian at 1 year old—She had a beautiful male, black and white Pom puppy (that we named Dixie). Owner name: Etienette." 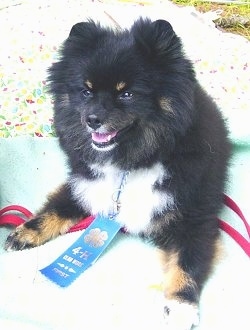 Sprite at age 3 just after winning a 4H fun match 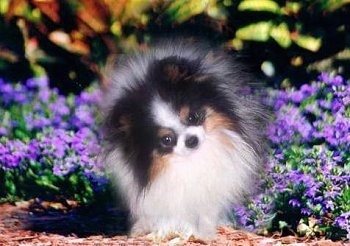 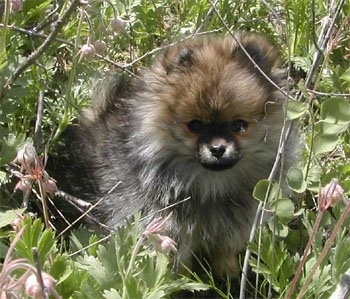 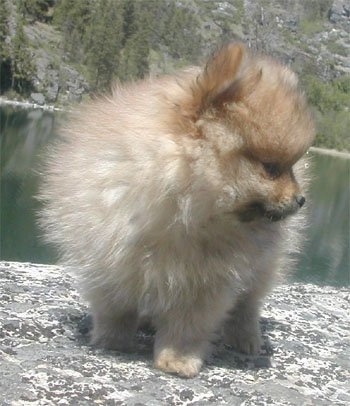 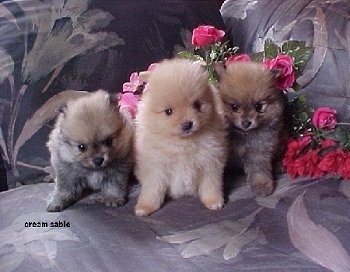 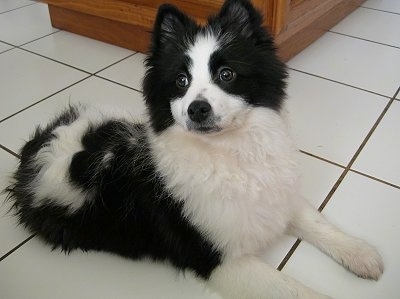 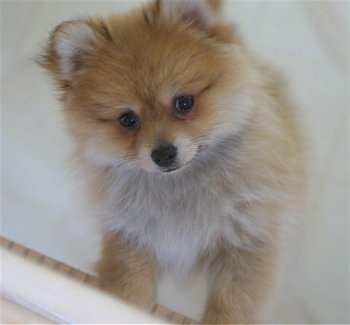 Tallulah Bell as a puppy 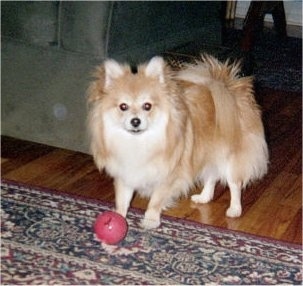 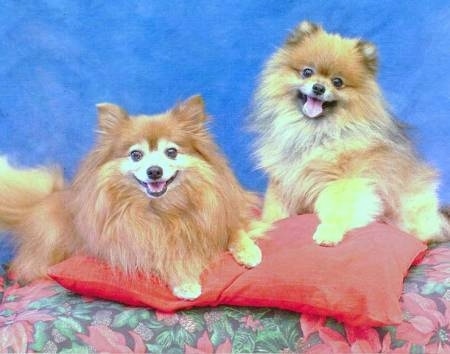 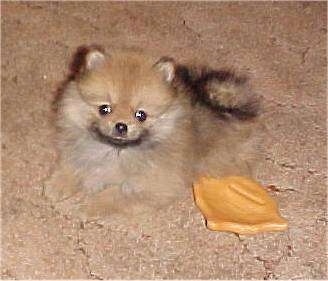