A day in the life with Mia the American Bully (Bully Pit) puppy. 28 weeks old, 53 pounds, 18 1/4 inches from the ground to the highest point of the shoulders (the withers). 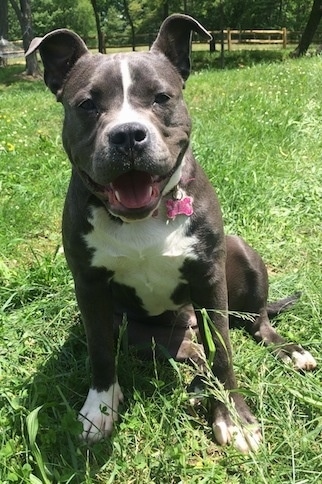 Mia loves playing in her new pool. It's not even summer yet, the days are still on the cool side, yet she keeps getting in and splashing around. Notice how she puts her face down into the water. At the end of the clip she decides to eat a leaf, which I ended up taking out of her mouth before she swallowed it. Also notice Mia's tail height. It is straight out from her body rather than up high over her back. What a well-tempered, balanced girl she turned out to be.

Mia is always busy. If she is not exploring the yard, she is playing with a toy, in her pool or pestering one of her brothers. Here she is bothering Spencer, her Pit Bull brother. Mia is good at getting both Bruno and Spencer to play with her, but sometimes I have to tell her to stop as they do not want to play and she is very persistent about it. I decide this by watching the older dog's body language. If they seem like they have had enough and are trying to walk away I tell Mia to stop. Spencer will often make that grizzly bear sound even when he is upside down with his tail wagging so I cannot go by his sounds alone. After Mia stops biting at Spencer she decides to clean his face. Taking Mia for a walk does wonders at calming her busy mind down. 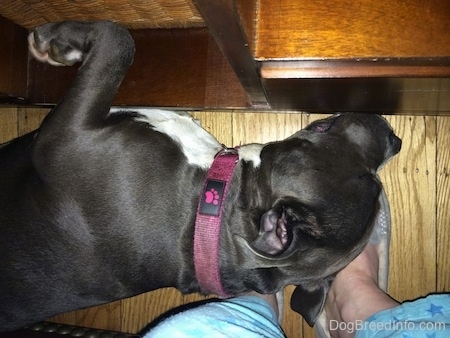 When Mia finally does crash she likes to be next to someone. She will squeeze herself into small places in order to sleep next to or lean up against another dog or human. Here she is between the couch and the coffee table sleeping on my feet. She makes a great foot warmer.

My old Boxer, Allie was spayed as a puppy at 4-months-old. Soon after she developed a bad case of spay incontinence. There would be a puddle of urine under her when she would sit or lay down. You could see it dripping all day long and sometimes a larger amount would rush out as she went from a down to a standing position. She had no control over it and didn't appear to be aware of it. The vet admitted we should have waited longer before spaying her. Hormones are a factor in the strength of the bladder sphincter and her estrogen levels dropped after her spay. Her bladder sphincter never developed properly. Allie was on medicine for the rest of her life to control her urine leakage. After that ordeal I made the personal decision to wait about a year before getting my dogs fixed. This includes my male dogs as a lack of the testosterone hormone effects their growth the same way a human boy would be effected if he grew up without testosterone. The body grows differently. I usually neuter them about 11 to 12 months or the first sign that their abundance of hormones are effecting their temperament. There is a balance that one has to be aware of as there are positive and negative things about both fixing early and fixing later. For some early may be ideal, for others later, as there are a wide range of factors to consider. For example, spaying a female dog reduces the risk of mammary cancer and eliminates the risk of uterine, ovary cancer and pyometra. Mia will be spayed, just later rather than sooner so she can grow up with a normal level of hormones. When she is done or just about done growing I will have her spayed. 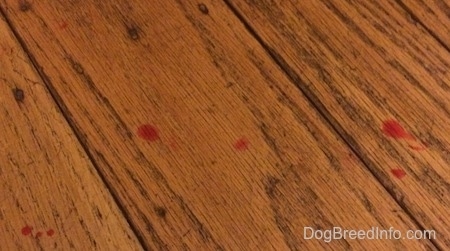 Mia is 6-months-old and the negative side effects are showing strong as she drips blood all over the house. I also have to be careful not to expose her to un-neutered male dogs. We do not want any puppies! Bruno and Spencer are both neutered so there are no issues there. Bruno seems to not even have noticed that she is in heat. Spencer on the other hand keep smelling her. Smelling is all we allow. He is told no should he try anything else. 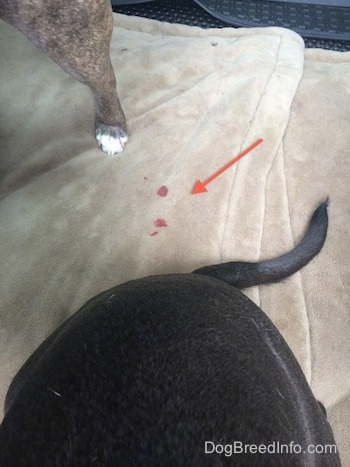 Everytime I turn around there are new drips of blood. I am constantly cleaning it up. Off to the pet store to buy her a diaper. 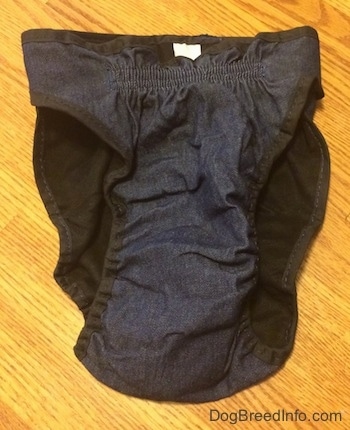 This is the diaper Mia needs to wear while inside the house. I take it off when she goes outside and put it back on when she comes in. 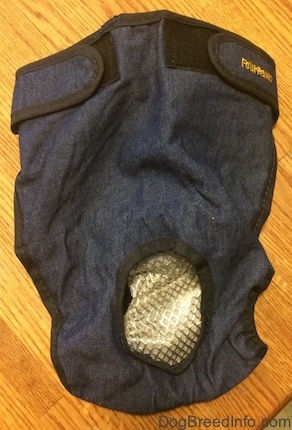 This is the back of the diaper. It has a tail hole. 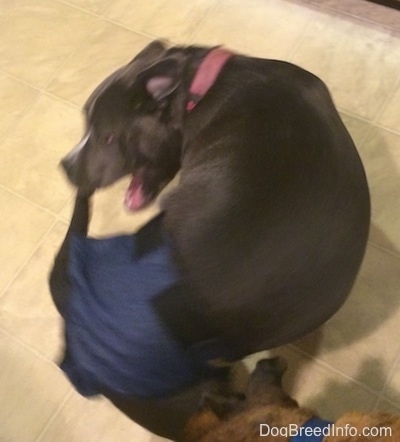 At first Mia tried to bite at it as she spun around as though she were chasing her tail. 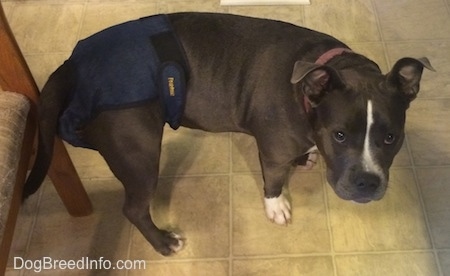 I told her "No" and she stopped and looked at me. "Really mom?" 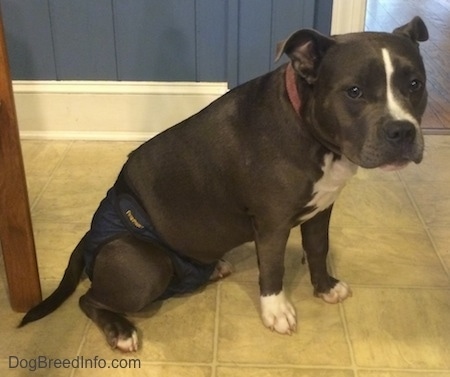 Mia soon got used to her diaper "Mia you are going to have to wear those pants for about 7 to 10 days, so get used to it."

Mia showed little interest in her breakfast this morning. She only ate a fourth of it and then walked away. We went about our day as normal. Mia did very well on our walk at the park. 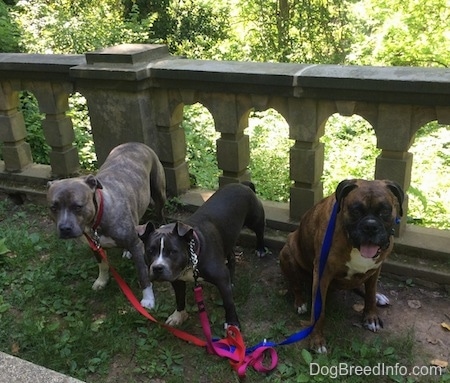 The pack posed for a picture. 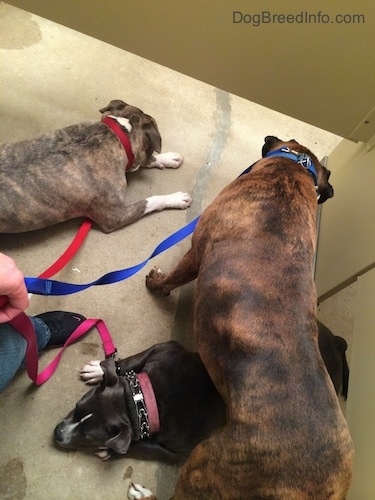 After the walk it was time for the human to visit the bathroom. Large stalls the entire pack fits in come in handy. 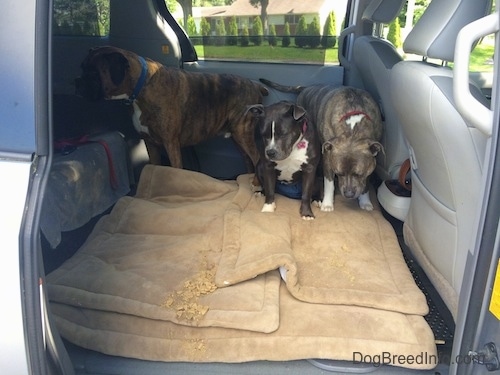 On the way home Mia threw up her small breakfast along with the water she had drank after the walk. The entire pack backed away from it. Just like a human female during her cycle, one of the side effects of a dog in heat can be a loss of appetite and an upset stomach due to the abundance of hormones in the body. Later the same day I offered her some treats and she eagerly ate them and kept them down. She also drank water and kept that down, too. I will watch her, but as of now her lack of appetite for her breakfast and her upset stomach appear to be a side effect of her cycle.

Later the same night Mia ate all of her dinner and licked her bowl clean. She still seemed a bit tired, but was trotting around watching bugs and chewing on her bone. Oh no, Spenser trotted over to me carrying half a bone. Either someone ran that sucker over with a car or one of you pups have a very strong jaw. The big question is, where is the other half? I am sure it is in pieces somewhere. But where? 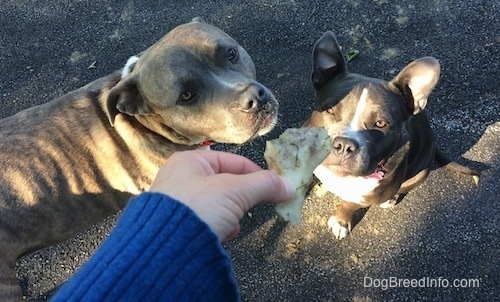 Later Mia showed up with this piece. Come on pups, show me where all of the other pieces are so I can throw them away before someone chokes. And no, you cannot have this back. I was on the couch when I heard something that sounded as if someone was choking. I looked around the corner to find Mia chewing on a paper towel. A piece of it had gotten back in her mouth further than she liked and she was trying to spit it back out. "Hey, where did you even get that anyway." It was all slobbery wet. Yuck, now I have to wash my hands. The next day she did it again! Now I know where you are getting them. You're stealing them from the coffee table when a paper towel is left behind from someone's TV snack. Now I am on a mission to catch you so you understand that is a big puppy no-no!