A day in the life with Mia the American Bully (Bully Pit) puppy. Mia's fifth week—11 weeks old, 17 pounds, 12 inches from the ground to the highest point of the shoulders (the withers). 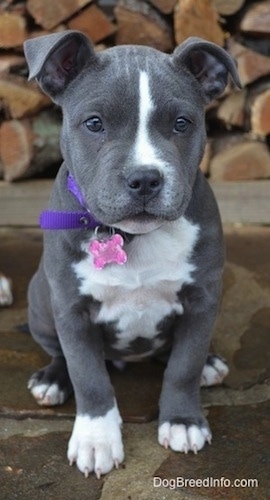 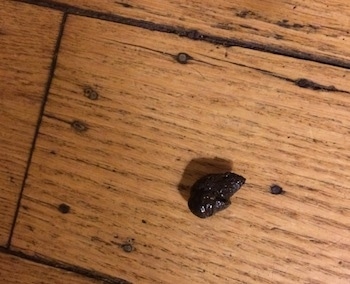 Another winter storm moved in. It started off as rain and later turned to snow. It was raining in the morning when Mia was first let out. She walked out onto the porch and instead of going to her potty spot she peed on the porch and ran back to the house. OK, well that was better than inside the house. A half hour later I was in the kitchen preparing the dog's breakfast. Mia was sitting down patiently in front of me. She suddenly got up and shot out of the kitchen like something urgent was about to happen. What the heck? I followed. She was in a hurry, suddenly she squatted and started to poop in the living room. "Aaatttt atttt atttt!!!!" was my disapproving sound that just came out without even thinking. Mia stood up mid poop and ran to the front door. I opened the door as fast as I could and she leaped off the step to finish her business.

Later the same day Mia ran to the door on her own and this time she actually made it. I opened it and she ran off to do her business outside. Good girl, Mia. You definitely have the concept down.

At 4:00 a.m. Mia cried in her crate to be let out. I went down stairs and picked up the leash thinking she might run to the dog beds, but when I opened the crate door she headed straight for the front door. Mia pooped and peed before coming back inside. Once inside she wanted to sleep with her brothers in the beds. Sorry pup. You need to be watched and do you remember my rule about the time starting with a 4? Go back to bed in your crate for a while because your mamma does not get up at 4:00 a.m..

Housebreaking in the Van

There was a two hour delay from school because of the snow storm that had hit the previous day. It was time to take Sara to the bus stop. Our driveway is long and if we walk up to the top often we will have a line of cats behind us. We do not want to lead them to the road so we drive. I looked at all three sleeping dogs on the dog bed. Do I leave Mia for 10 minutes unsupervised? No, not a good idea. I could put her in her crate, but there is no reason why she can't just come. I picked her up and carried her to the van setting her down in the back. She sat down watching as we drove up the driveway. Mia whined. Hmmmm, you just woke up. I should see if you have to pee. It would be a shame if I shushed you and you were telling me you had to go. I parked the van and carried Mia into the middle of the snow on the side of the driveway to a safe spot away from the road. Mia squatted in the exact spot I plopped her. Good girl, Mia. What a good girl. I took her back to the van where we waited for the bus. I knew that pup was smart. I just had to figure out how to make her understand what the humans wanted and I think we have succeeded. 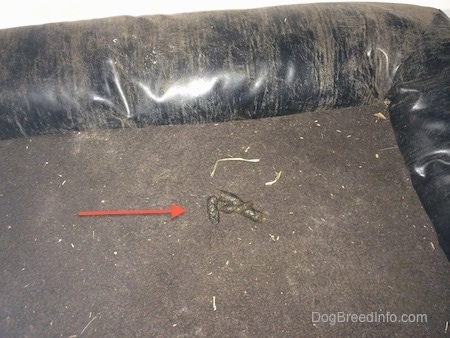 We woke up to a another winter storm. Mia yipped in her crate to be let out at 5:45 a.m.. Good girl. You slept through the night. I opened the crate and she followed Spencer out the door. I watched from the window. Spencer walked around the corner of the porch looking out assessing the situation before heading back to the front the porch and trotting off into the bad weather to quickly get it done.

Mia had followed him around the corner of the porch, but she stopped when he headed out into the weather. She decided to just pee on the porch. No way was she walking off into frozen ice falling from the sky. She then walked back to the porch dog bed and started rolling around in it. I went to get my coat to take the pup to the potty spot. She always has to poop in the morning and there will be no convincing her to walk off into an ice storm. In the seconds it took for me to grab my coat and walk out the front door Mai was already in the process of pooping on the dog bed.

Really? The bed? Why the bed? What's wrong with just pooping right on the stone of the porch like you did with the pee? Did you smell something on that dog bed that you felt you needed to not only roll in, but poop on top of? As much as I understand dogs, sometimes I just don't.

I didn't tell her no. If this becomes a habit we will work on it. Anywhere outside is better than inside. Between the storm and her just learning, I felt at that moment telling her no it could really confuse her. That is not a rule of housebreaking. It was just a feeling I had so I made the call to let it go. 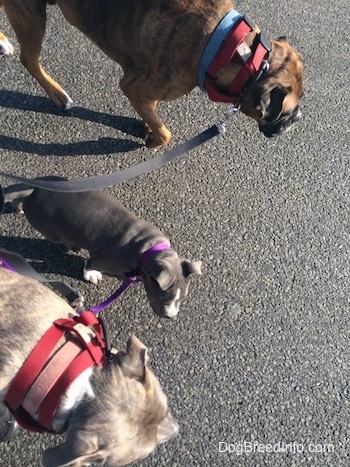 Oh, so much for a puppy to learn about how to behave on a walk. 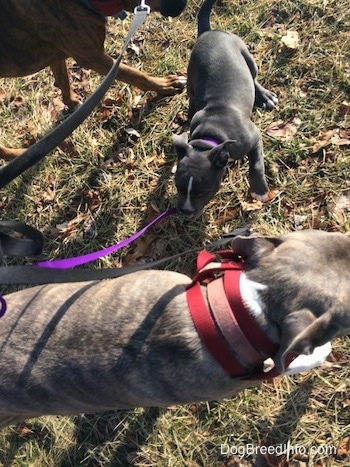 No biting the leashes, no pulling ahead and it's not playtime! 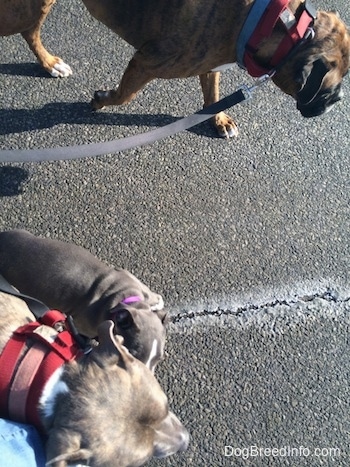 No biting on the other dogs. 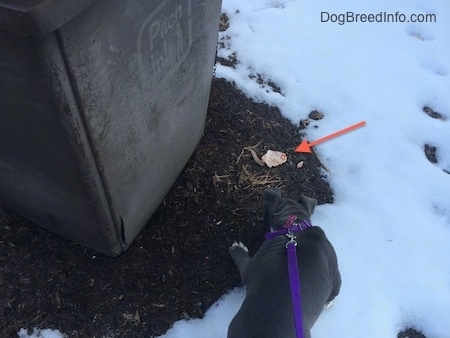 No eating trash no matter how tasty it smells. 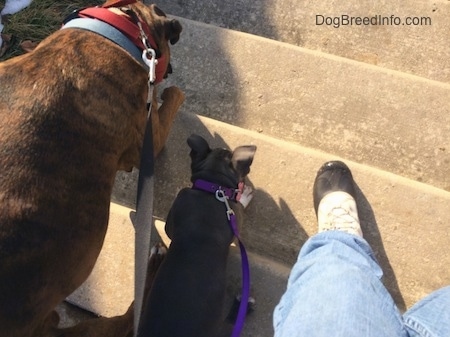 Good job on those steps, Mia! 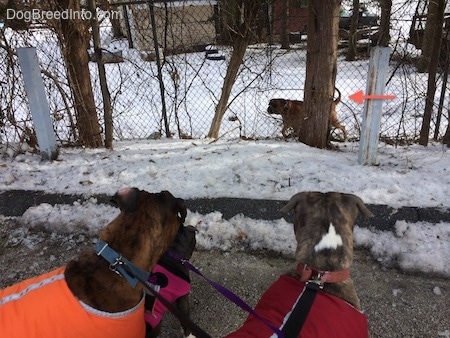 While out on a walk we passed a Shih Tzu barking from inside a nail salon. There was a glass door between all of the dogs. We kept walking and all the dogs looked in its direction, but ignored it, including Mia.

A little further down we passed a French Mastiff and a Bull Mastiff inside a fenced yard. The first dog ran over to the fence line growling and barking with it's fur and tail up. A second later the second Mastiff ran over holding it's head high. It was also barking and growling with it's tail and fur up. Even Bruno and Spencer started walking sideways to keep an eye on the dogs as we passed. Which dog decided to tell the dogs they were not afraid and to back off? You guessed it, Mia! Her tail and head went up and she raised herself high on all fours as she began to growl back. "Hey NO!" Along with a leash correction. I realize by Bruno and Spencer's reactions that the dogs meant more harm than most we pass, but Mia you need to learn to ignore even dogs like these. I will decide how to handle things and I say we just keep walking.

Our new mission, find dogs on walks and pass them in ignore mode.

Before we actually head out for our walk we first need to leash and coat up. Mia has been acting like this is playtime. She has even sassed back, barking when I tell her to calm down. We took our time with this last walk and just waited it out until she calmed down. After I leashed and coated them up Mia still didn't seem ready. She was trying to chew on everyone's coats and leashes. Oh no you don't. "Leave it!" and we will just stand here all day until you calm down. It took about 15 minutes, but she finally sat down and looked at me. She looked relaxed and all sassed out. OK, now we can leave. Mia walked much better on the leash this time. It is important that we do not leave until she is calm or we will set her attitude for the rest of the walk. 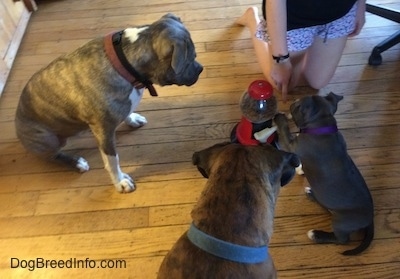 Mia gets a lesson on how to use the Yuppy Puppy Treat Machine. It not only challenges her mind, but teaches her patience and respect as she must calmly wait her turn. Sara goes around in a circle a few times giving each dog a chance to paw themselves a treat and eat it. The dogs who are not up must calmly wait. 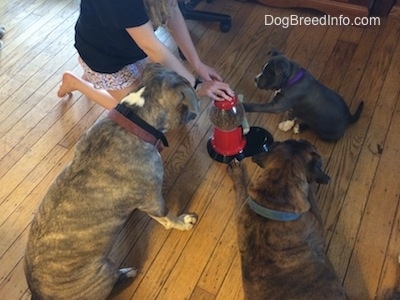 Sara asks for Mia's paw and pushes the machine's handle in front of her to show her what happens when it is pushed down. Mia's front legs are so short they barely reach the handle. 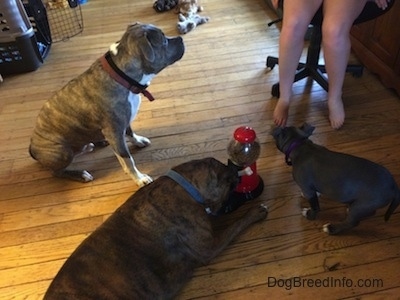 I realized later I didn't get a picture of Spencer getting his turn, but no worries he did. Mia waited patiently with some firm guidance from the humans. 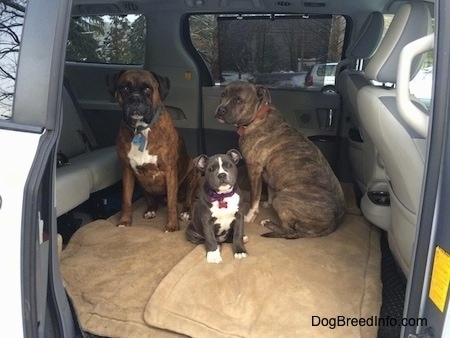 Mia travels well when her brothers Bruno the Boxer and Spencer the American Pitbull Terrier are with her. When she is traveling alone however she whines wanting to be on the drivers lap. That obviously cannot happen. Silly Mia, you are going to have to get used to being back there by yourself sometimes. Mia is getting too heavy to carry with one arm as I hold the other dog's leashes in my other arm. She is also too young to walk the entire time. Especially with the weather we have been having. I do not want to leave her home when we go out on our pack walks, so I bought a carry pack made for dogs. She has almost outgrown it already! She is to sit down in it, but she barely fits so she stands in it with her back legs as I hold her front legs in my arm. That works for now. Most of her weight is off of my arm and she is happy to be carried. I took the dogs for an off leash walk in the horse field. Wouldn't you know it, they spent most of the time looking for frozen horse poop loot! Stop digging up horse terds and eating them! You hear me, dogs! Sara teaches Mia the ultimate challenge. She places steak in front of the dogs and tells them to wait. Good girl Mia! You're a fast learner. Spencer has a piece of steak in front of him, too. Bruno's big head is just blocking the view. This exercise teaches a dog patience, respect, discipline and to focus on their handler, challenging their minds. The dogs love it because the reward is tasty. Notice how none of the dogs are staring at the food. They are looking at Sara. You want to teach the dog not to stare at the food, but rather look up at the human giving the commands. Mia watched the printer print out a bunch of papers for the first time and was she ever curious. She tried to play with it. It was cute and funny, she was just a little pup and this thing was spitting out papers! BUT I knew better. Had I entertained her for a second in her little comical antics at the printer I would be setting myself up for a dog who in the future would have issues with chewing things that came out of the printer and or playing with equipment at my desk. That would be a big no no and it would be my fault for giving her the wrong impression. "Leave it! Attttt" Im not kidding. Don't even think about it! Wait, are you like saying I can't play with that? Oh. Ok. You're no fun.