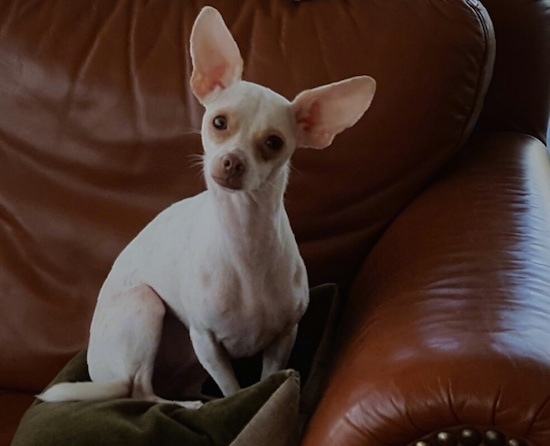 Ace the Chihuahua, Rat Terrier mix at 1 year and 9 months old—"Ace was a big surprise gift from my best friend. He loves to play with his toys and tennis balls. His personality is very strong and extremely demanding when it comes to anything he wants. He is very loving to me and my closest friends. In public, he acts very arrogant and will not allow anyone to pet him. I take him everywhere with me and he's the love of my life...:)"

The Rat-Cha is not a purebred dog. It is a cross between the Chihuahua and the Rat Terrier. The best way to determine the temperament of a mixed breed is to look up all breeds in the cross and know you can get any combination of any of the characteristics found in either breed. Not all of these designer hybrid dogs being bred are 50% purebred to 50% purebred. It is very common for breeders to breed multi-generation crosses. 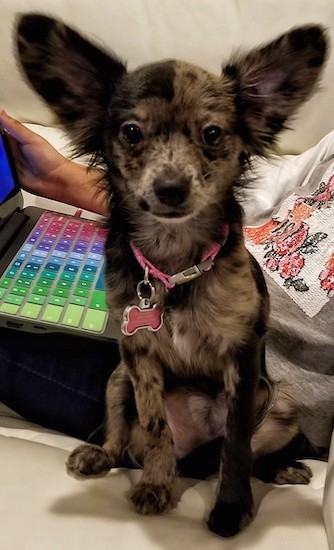 "This is Zoey. She is an 11-month-old puppy from Boston, MA. She was a rescue from a dog breeder accused of animal abuse. She was 1 of 8 puppies rescued. She is half Rat Terrier and half Chihuahua. Her dad was a blue merle Chihuahua, which his merle gene was passed down to Zoey. I've seen all types of merle before, but never in this color. Notice the color split on top of her head, it also occurs under her chin, with a perfect line down the middle of her head. Zoey gets called an African Wild Dog or Hyena from the public out on walks all the time. Zoey is very sweet and docile and also very intelligent. She learned commands very quickly and loves to go to the beach. Zoey demands attention and will whine when the diva doesn't get her way." 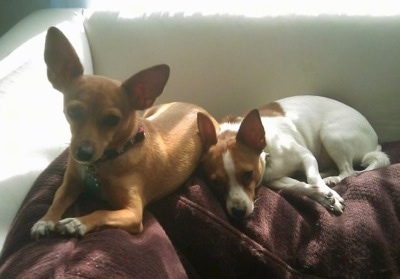 "Rat-Chas (Chihuahua / Rat Terrier mixes)—this is Peanut and J.P.; Peanut is 6 years old and J.P. is 2. They both have completely different personalities for being the same mix! Peanut is really lazy! Her entire life consists of nothing more than sleeping and sitting on my lap. J.P. is full of energy! He would run around all day long if he could. They are both great dogs and so far I have had no issues with them whatsoever!"

"This is Beamer, a Rat Terrier/Chihuahua mix. He is about 5 years old and was brought into our home from the animal shelter. He loves human interaction and has to be in the middle of the action. Being that he is from the shelter, we are unclear about his history, but he do know he is not very good with small children and other dogs, especially males that are larger than him. We gets walked 2-3 times a day and eats dry dog food." 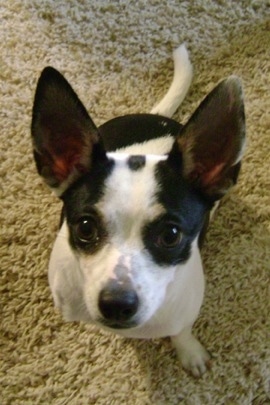 "This is my sweet baby Rilo, and I couldn't be happier with her. She's 9 months old in this picture, and has a great amount of energy. She loves digging into the blankets at night and then stretching completely out. She loves playing with other dogs, but she has to sniff them out first. Before she gets comfortable, she will just keep her distance. So far, she hasn't been a big fan of big dogs.

"I was working 13-hour days and planning my wedding this past semester, and her loving nature and the fact that she would get so happy when I would come home that her whole body wiggled was enough to keep me sane. Her only bad habit is that if she hears a doorbell or something similar on TV, she'll start barking. She goes on nightly walks as exercise."

"Cesar Millan is one of the few people on TV that is actually real these days. I absolutely love his show and have applied many things with my own pets. Just yesterday our new dog was being naughty and I put him in submissive mode and just walked away. He has not done that behavior since. Rilo didn't need much coaching; she wanted to do anything and everything to please me, so a simple no would work there. I do put myself in a calm, assertive mode when dealing with my pets, and they listen to me, so his philosophies are working, even for someone not trained." 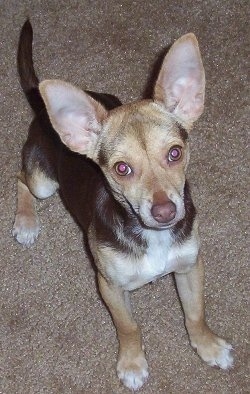 Daughtry the Rat-Cha at 6 months old and 6 pounds—"She loves to jump super high, loves kisses, and is the perfect lap dog! She loves other Chihuahuas and little dogs. She runs from big ones, though. She was easy to train and the sweetest dog ever! Her mom is 100% Chihuahua and her dad is 100% Rat Terrier." 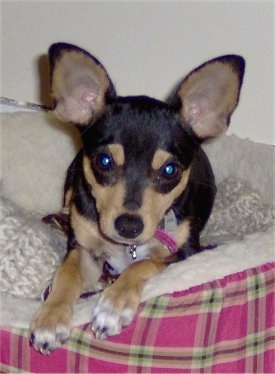 Abigail Rose the Rat-Cha mix at 6 months old—"She is very well behaved. She sits, plays fetch and lies down all on command, oh and she is also housetrained. She loves attention and would do anything to be with her daddy (me) LOL. She has been very easy to train. It has only taken about 1 month to do all 3 things." 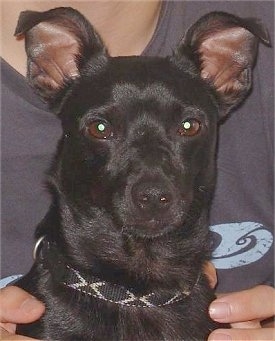 Bud, a mix between Chihuahua and Rat Terrier (Rat-Cha mix breed dog), at around 1½years old weighs around 15 pounds. 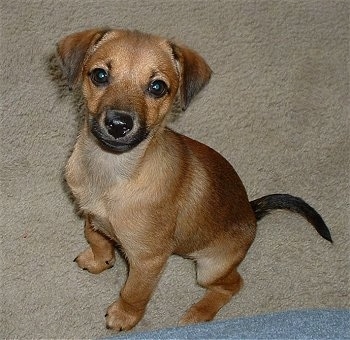 Pretty little girl Lula Belle the Rat-Cha at 15 months old—her owner says, "She's quite active, but is just as content napping on my lap. She rarely barks and only does so when she's really excited while we're playing. She has learned fairly quickly to use her Wee-Wee Pad. I reward her with a liver treat each time she poos. At 15 weeks, she's about 5-6 pounds. She loves to sleep under my legs while I'm watching television or on my computer. She's a joy and a terror at times, but I would not trade her for the world."

Barkley, a 4-month-old Rat-Cha with Cy, his cat friend—Barkley is a mix between a Chihuahua and a Rat Terrier. 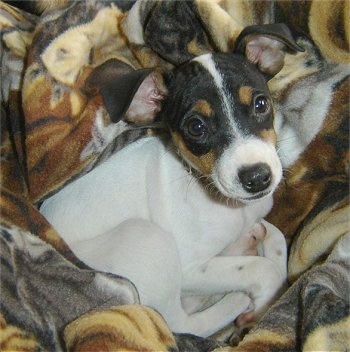 See more examples of the Rat-Cha