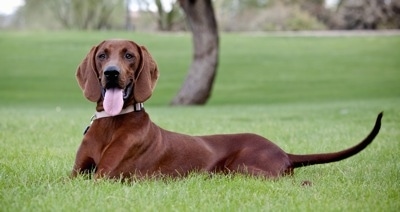 "Little Miss Lou is a purebred Redbone Coonhound. She is 8 months in this picture. She is very active and she loves to go to the park where there is a pond and birds around to chase. She loves to go swimming and play all day outside. And most of all loves her squeaky toys! She is very affectionate and loves all the attention she can get! When at home she's calm and sleeps most of the time."

The Redbone Coonhound is a handsome, robust and strong coonhound. It has a clean, well-modeled head, with a medium stop between the brow and nose. The long, hanging ears extend to the tip of the nose when the dog is following a scent. The tail is held upright. The paws are compact and cat-like, with thick, strong pads. The skin is a rich red color. The coat is shiny and smooth, lies flat, and is short like that of a Beagle. Coat colors include red, and red with a little white. Although some Redbones might have traces of white on their feet or chest, this friendly, elegant dog is the only solid-colored coonhound.

The Redbone Coonhound is happy, even-tempered and very good with children. It can be surprisingly affectionate and has a pleasant-sounding bark. It loves being with its people. If raised indoors from puppyhood, it will adapt well to family life. Coonhounds are all instinctive hunters, and it is not difficult to train the breed to follow scent and tree a quarry. The Redbone has a strong desire to please his master. Redbones are hotter-nosed, able to locate, and faster tree coons than many other coonhounds. Like other coonhounds, the Redbone is alert, quick and able to work in all types of weather over difficult terrain. Their agility benefits them when hunting in fenced country or steep, rocky ground. With the thrusting grit of a terrier and the pumping stamina of a Husky, the Redbone is every hunter's hot-trailed dream come true. A natural treeing instinct has been bred into the Redbone, making it a specialist in coon hunting. But it is also proficient in trailing and treeing bear, cougar and bobcat. When used on game, Redbones often hunt in packs. Redbones are known to make excellent water dogs. In the home he is affectionate and kind. The Redbone should be well socialized at an early age and taught simple obedience like walking on a leash. Be careful with cats and other non-canine pets. If raised with a kitten from puppyhood they may be okay but some Redbone Coonhounds try to hunt cats down like raccoons. Some Redbone Coonhounds drool a lot, while others do not at all. It all depends on the shape of the lips. The true coonhound-shaped mouth will drool a lot. The Redbone Coonhound needs a firm, but calm, confident, consistent pack leader in order to be mentally stable.

Usually a healthy breed, although some lines have seen their share of hip dysplasia.

The Redbone Coonhound will do okay in an apartment if it is sufficiently exercised. These dogs are relatively inactive indoors and will do best with at least a large yard. Their all-weather coat allows them to live and sleep outdoors and work in all kinds of terrain.

This breed needs a lot of physical exercise. They need to be taken on a daily walk or jog. Coonhounds are born natural hunters, so they have a tendency to run off and hunt if they are not kept well-fenced while exercising on their own.

An occasional brushing will do. This breed is a light shedder.

Years ago most coon hunters who owned a red dog of unknown ancestry, but proven ability in tracking and treeing raccoons, called their dog a "Redbone." Then a few serious breeders who were devoted both to the breed and the sport began a campaign of selective breeding to produce a hound with the necessary characteristics to make a superior coonhound which would breed true to type in color and conformation. Breeders in the American South, Tennessee and Georgia to be precise, desired a hound with more speed and a hotter sniffer than many of the existing coonhounds. The first dogs were commonly called "Saddlebacks." The background color was red, and most of them possessed black saddle markings. By selective breeding, the black saddle was bred out and the solid red dogs became known as Redbone Coonhounds. As is the case with most of the other coonhound breeds, the ancestors of the Redbone were Foxhounds. A Bloodhound cross is said to have been made, and it's also said to account for the white chest and feet markings which still occasionally show up in Redbone pups today. The result of this mixture makes them a reliable hunting dog, as the breed's moderate size, Foxhound-ish appearance and courage are in its nature. They are used primarily for treeing coon, but can be adapted to other game, including big cats. This hound may have been named after an early breeder, Peter Redbone of Tennessee, although much of its breeding has taken place in Georgia. The foundation stock of the modern day Redbone came from George F.L. Birdsong of Georgia, who was a noted fox hunter and breeder. He obtained the pack of Dr. Thomas Henry in the 1840s. The Redbone was the second coonhound breed to be registered with UKC, the first being registered in 1902, two years after the Black and Tan. Today it is used for hunting raccoon and as a companion dog. The Redbone Coonhound was recognized by the AKC in 2009. 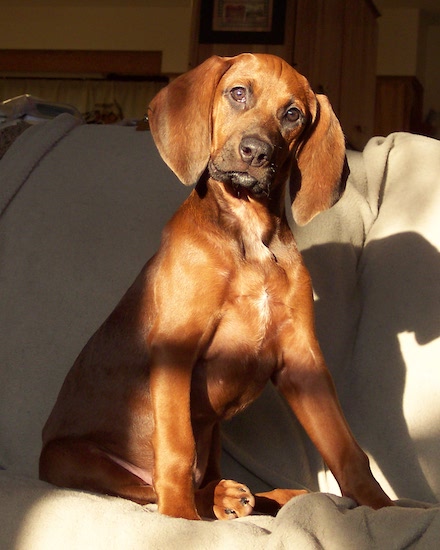 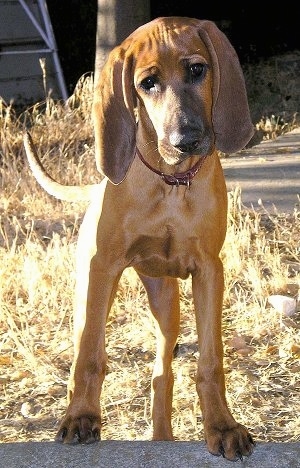 "Lucy is 16 weeks old. She is a full-blooded UKC-certified Redbone Coonhound with lots of energy. She recently discovered the water, and still isn't too sure of it, yet is an excellent swimmer. She's friendly with ALL dogs, loves to be around people and loves to play with both. Inside, she loves to sleep with her humans, but outside she's always got her nose to the ground, looking for something to chew or play with. She's a great dog, who's all legs and ears." 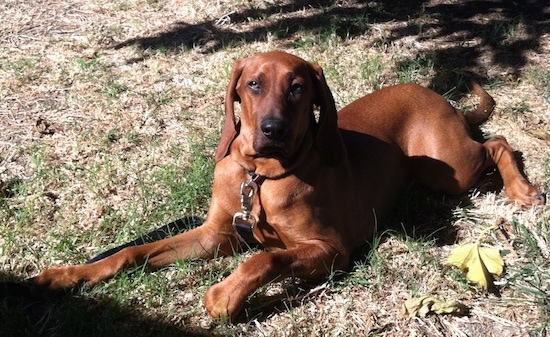 Ember the Redbone Coonhound as a puppy at 6 months old laying down in the grass.—"She is a very fun loving dog." 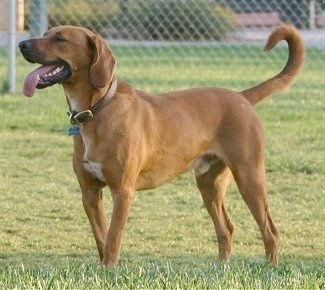 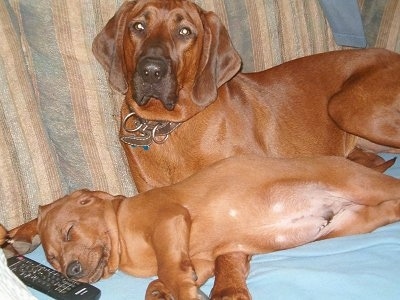 Romeo and his "clone" Jameson the puppy napping on the sofa 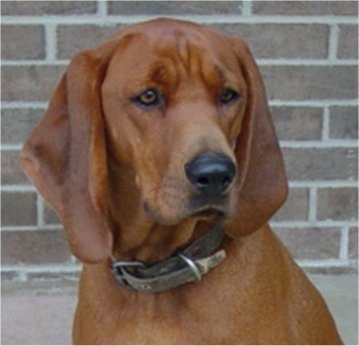 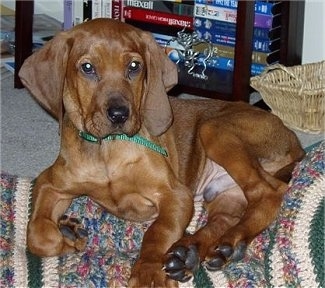 Crockett the Redbone Coonhound as a puppy 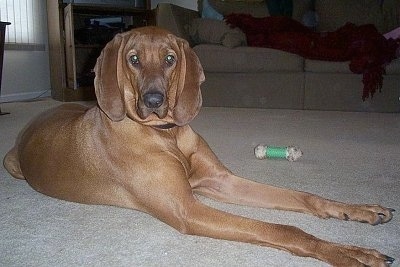 "Crockett the Redbone Coonhound all grown up—he weighs around 98 lbs. and is the sweetest dog. Drools a lot, but we love him. Also an excellent swimmer."