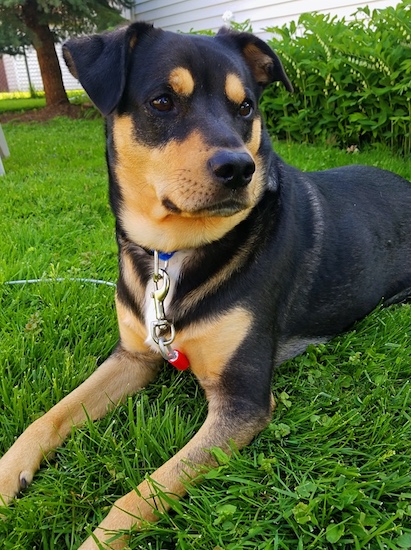 "This is our Shepweiler Marshall. He's a 2 1/2 year old rescue dog from West Virginia that we recently adopted last December from a shelter in Niagara Falls."

The Shepweiler is not a purebred dog. It is a cross between the German Shepherd and the Rottweiler. The best way to determine the temperament of a mixed breed is to look up all breeds in the cross and know you can get any combination of any of the characteristics found in either breed. Not all of these designer hybrid dogs being bred are 50% purebred to 50% purebred. It is very common for breeders to breed multi-generation crosses. 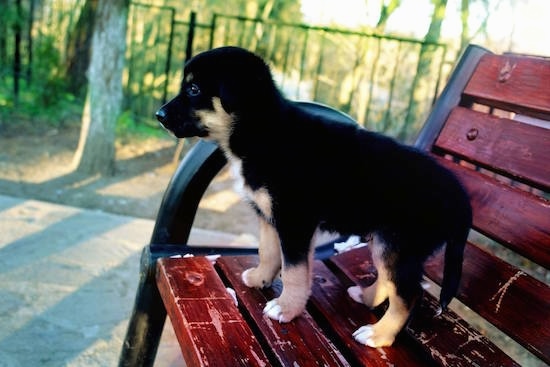 Jeff the Shepweiler (Rottweiler / Shepherd mix) as a puppy at 6 months old standing on a park bench—"Jeff is very dynamic. He likes to think that he has everything under control and that he is the boss. He is strong, bites pretty hard and barks often and likes to run." 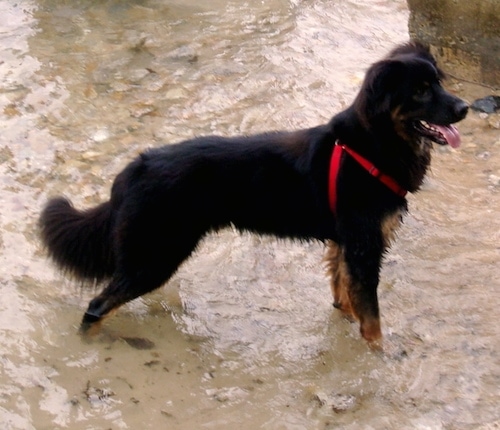 Toby the Shepweiler at 4 years old—"Toby is an international doggie! He lives in Hong Kong right now, but is proudly Canadian. He is the perfect example of a 'gentle giant' and will patiently sit still while kids that barely reach his head pet him and tug on his ears. Toby's favourite activities are swimming, going for long hikes and chasing after his favourite toys, rocks. He's the smartest dog and has many words that he understands; he cocks his head side to side when he's listening to you say walk, beach, dinner, hike, and anything else you may want to say to him, he's very attentive." 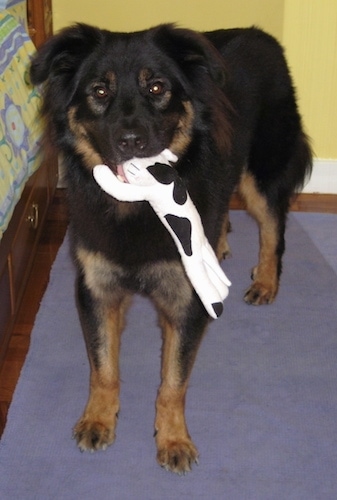 "Toby's got lovely long fur behind his ears and it goes crimped when he gets wet, or if it's really humid outside-just like people hair! He has the body of a big dog, but seems to think he's quite small as he jumps up to lay on your lap whenever he pleases. He has an odd habit, every time he hears a siren, he will run onto the balcony and howl until the siren sound is too far away for him to hear. Also, if he's laying down and sees you approaching, he instantly roll onto his back with complete inhibition! He's a big softie and our whole family is completely in love with our big fuzzy bear!" 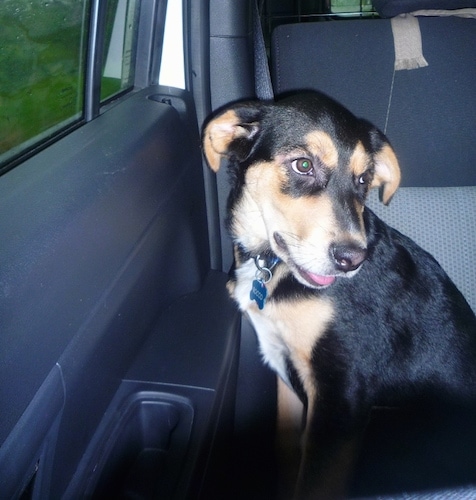 Rocco the Shepweiler as a puppy at 2 months old—"Rocco is such a good dog, very intelligent, energetic, and always ready to play. He might not be pure, but he is the best dog we could ever have." 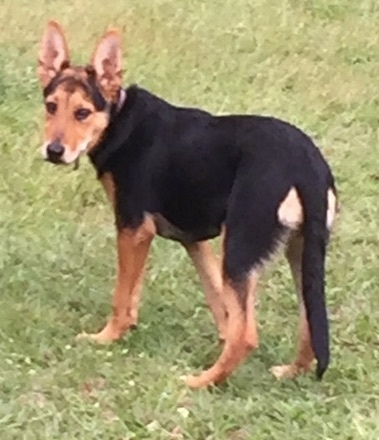 Kasey Mae the Shepweiler (Rottie / Shepherd mix) as a puppy at 5 months old out in the yard.—"Kasey's mother was an AKC Rottweiler and sired by a pure breed German Shepherd Dog. The mix is a protective guardian / herding dog with good looks, brains and devotion! This accidental breeding is growing in popularity. I think when the masses catch on to the versatility and personality of the mix I'm sure it will be a new breed in progress." 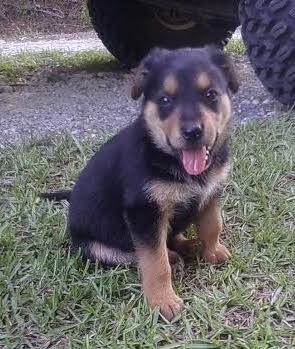 Kasey Mae the Shepweiler as a puppy at 6 weeks old sitting outside by the car. 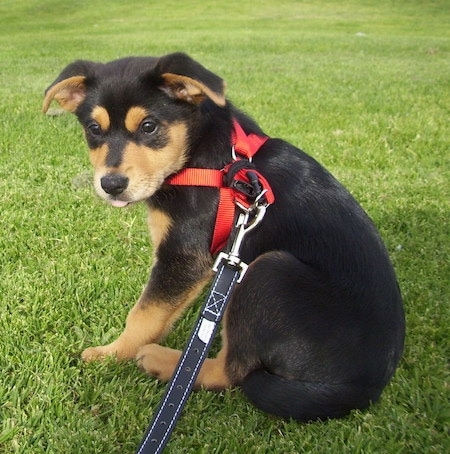 Layla the Shepweiler as a puppy at 3 months old wearing a red harness.—"Me and my girlfriend were looking for a fun and loving big dog. We ended up getting Layla, our Rottweiler/ Shepherd mix from the Los Angeles shelter. She was three months old when we got her and had her sister with her. We wanted to take both but we already had two other dogs. She is growing up real quick each and everyday. Layla has all the energy in the world and loves to play and interact with anything and anyone she comes across with. She loves to sleep right in between us but it will stop soon when she becomes a big dog." 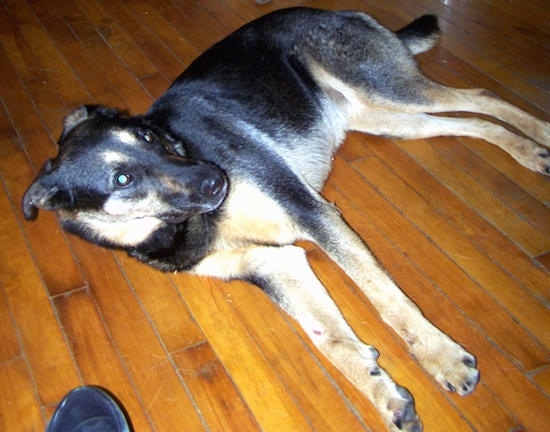 Meika the Rottweiler / German Shepherd mix at 2 years old—"Meika has a personality that captures your heart. She is very obedient and loves to play ball. The funniest thing I have seen her do is if you have a water hose she will try to catch the water as it flys in the air. She would do this all day if you let her. This pic was just after she had a good playtime." 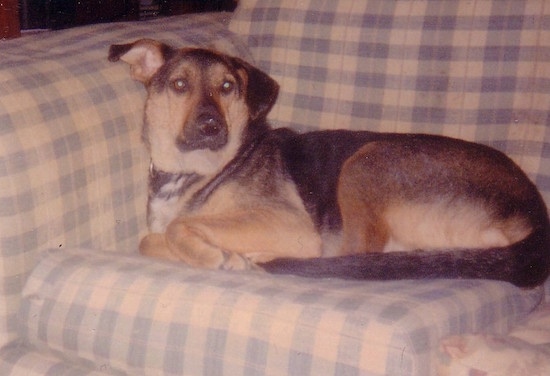 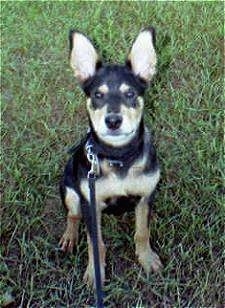 See more examples of the Shepweiler