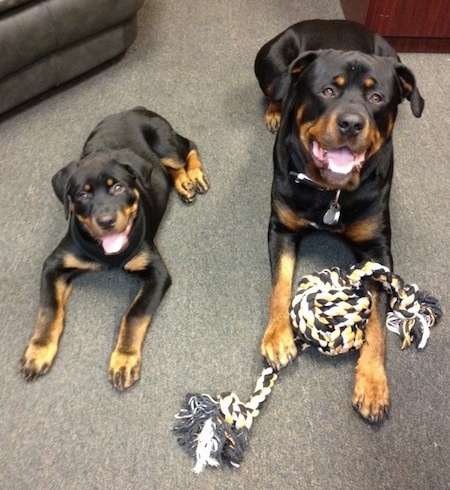 Royce (left) the Rottie puppy at 5 months old with Barracuda aka 'Cuda (right) the adult Rottie at 3 1/2 years old—"'Cuda is a very tall Rottie and weighs 139 pounds. Royce weighed 115 pounds when he was 11 months old and is taller than his brother! I wish Royce was as laid back and as well behaved as 'Cuda, who goes to work with my husband every day. No leash is needed and he is extremely friendly and social. Royce, on the other hand, is a ball of energy. Absolutely wild, but friendly. He cannot sit still and loves to play with 'Cuda, who will interact willingly until Royce crosses the line and nips his ears. Never a fight between them, but Royce knows when to back off. Just hoping time and patience will settle him down. I love them both and would never own another breed!"

The Rottweiler has a muscular, massive, powerful body. The head is broad with a rounded forehead. The muzzle is well developed. The teeth meet in a scissors bite. The wide nose is black. The lips are black and the inside of the mouth is dark. The medium-sized eyes are dark and almond shaped. Some Rottweilers have been known to have blue eyes or one blue and one brown eye. This trait is not recognized in the show world and does not meet the breed’s written standard. The ears are triangular and carried forward. The tail is customarily docked. Note: docking tails is illegal in most parts of Europe. Rear dewclaws are often removed. The chest is broad and deep. The coat is short, hard and thick. It is black with rust to mahogany markings on the cheeks, muzzle, paws and legs. A red color with brown markings also exists. There is a deficiency in the hair gene that makes the coloring a lighter red.

The Rottie is powerful, calm, trainable, courageous and devoted to its owner and family. Loyal and protective, it will defend its family fiercely if needed, seemingly immune to pain. Serious, even-tempered, brave, confident and courageous, this breed needs an owner who is strong minded, calm, but firm and able to handle this dog’s massive size. The Rottie is a docile, natural guard dog with a laid-back, reliable temperament. It is highly intelligent and has proven its worth beyond question in police, military and customs work over many centuries and can be trained for competitive obedience. Because of its size, training should begin when the dog is a small puppy. This breed needs a lot of leadership and socialization. It will not be happy confined to a kennel or backyard. The objective in training this dog is to achieve pack leader status. It is a natural instinct for a dog to have an order in its pack. When we humans live with dogs, we become their pack. The entire pack cooperates under a single leader. Lines are clearly defined and rules are set. You and all other humans MUST be higher up in the order than the dog. That is the only way your relationship can be a success. When the Rottweiler receives consistent leadership and is trained, it will be a good playmate for the children. It will accept cats, other dogs and other household pets as long as the dog has been socialized well and has owners who assert their authority over the dog. Friends and relatives of the family are normally enthusiastically welcomed. Strangers from whom the dog senses bad intentions can get no further than the sidewalk.

This breed is susceptible to ACL damage. Prone to hip dysplasia. Also prone to entropion (narrowing of the slit between the eyelids). Tends to snore. Can overeat easily.

The Rottie will do okay in an apartment if it is sufficiently exercised. These dogs are relatively inactive indoors and a small yard will be sufficient.

The Rottweiler needs plenty of exercise. You can't give these robust dogs too much work or exercise; they thrive on it. They need to be taken on a daily walk or jog. Running in the woods and in open country makes them very happy and they have no desire to wander from you. Swimming or running beside a bicycle are perfect activities for this dog and it also loves retrieving a ball.

The smooth, glossy coat is easy to groom. Brush with a firm bristle brush and bathe only when necessary. This breed is an average shedder.

The Rottweiler is probably descended from the Italian Mastiff, which accompanied the herds that the Romans brought with them when they invaded Europe. During the Middle Ages, it was used as a herder, as a guard, messenger dog, draught dog and for police work. It was bred in the German town of Rottweiler in Wurttemberg. Practically extinct in the 1800s, the breed population began a comeback in the early twentieth century due to the efforts of enthusiastic breeders centered in Stuttgart. In Germany on January 13, 1907, the DRK (Deutscher Rottweiler-Klub (German Rottweiler Club)) was established. Shortly after on April 27, 1907, the SDRK (Süddeutscher Rottweiler-Klub (South German Rottweiler Club)) was formed, which later became the IRK (International Rottweiler Club). The Rottweiler standard was then set. The breed was first recognized by the AKC in 1931. Some of the Rottweiler's talents include: tracking, herding, watchdog, guarding, search and rescue, guide dogs for the blind, police work, carting, competitive obedience and Schutzhund. 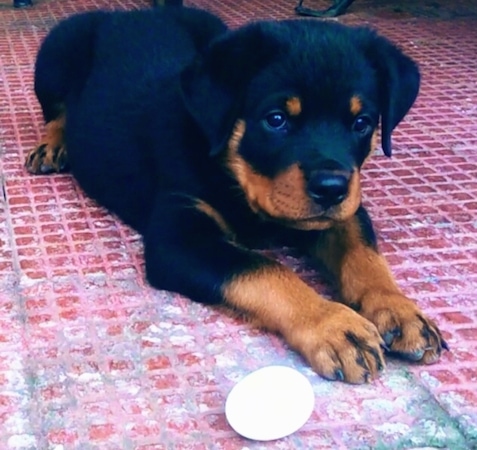 Max the male Rottweiler puppy at about 7 weeks old—"This is my Rottweiler Max. He is shown here at 48 days old. He is really an obedient fellow but a bit headstrong too. He has a lots of energy so I take him for atleast 3 walks per day. In this pic he is sitting patiently for me to break the covering of that hard boiled egg, because he can't do it on his own lol. I just love him." 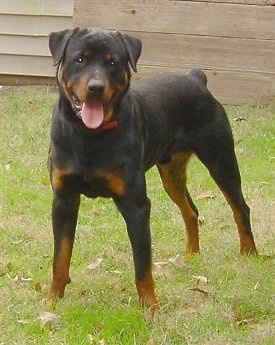 Bear, a male Rottie at 1 year old standing out in the yard. 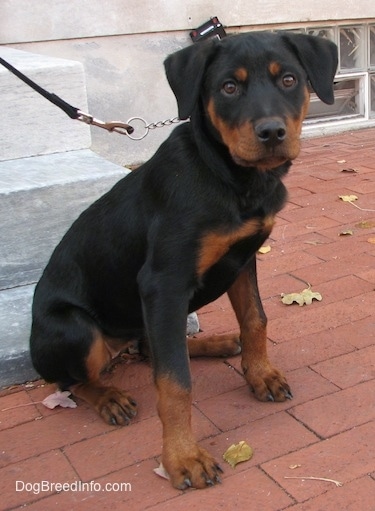 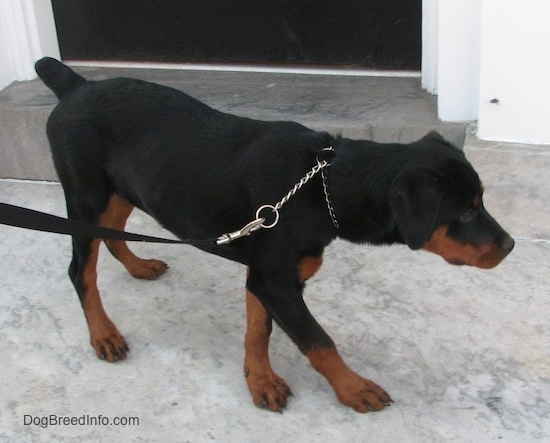 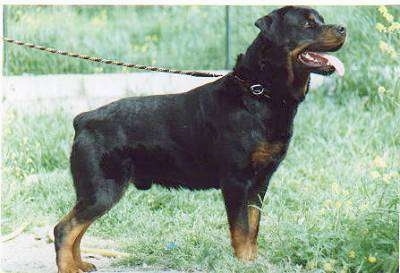 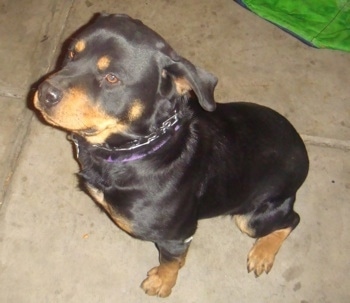 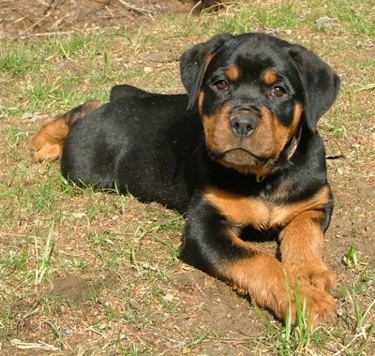 "This is my little muscle man, Chaos. He is 3 months old and a well-balanced little dude. He loves to spend his time playing with my other dog and it sure tires him out. His cute little quirk is that he completely lies down to eat. Talk about saving energy :) He's a great addition to the family and I can't wait to show him the ropes so he can grow up to be a great breed advocate!"

See more examples of the Rottweiler