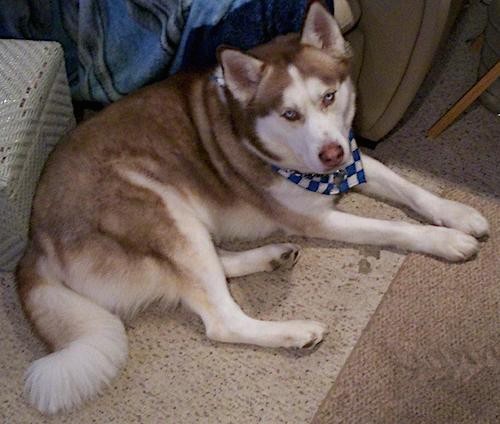 This is Shaka the Siberian Husky at approximately 100 lbs (45 kg). He has red and white fur and crystal blue matching eyes.

This page lists breeds of dogs that can have blue eyes as an adult dog. Some puppies can be born with blue eyes, but the eyes will darken as the dog grows up. This is a list of breeds that can keep their blue coloring into adulthood even when the breed standard considers it a fault. Sometimes a dog will have two blue eyes, or only one blue eye. Mix breed dogs that have a blue-eyed purebred in their lines can have blue eyes. 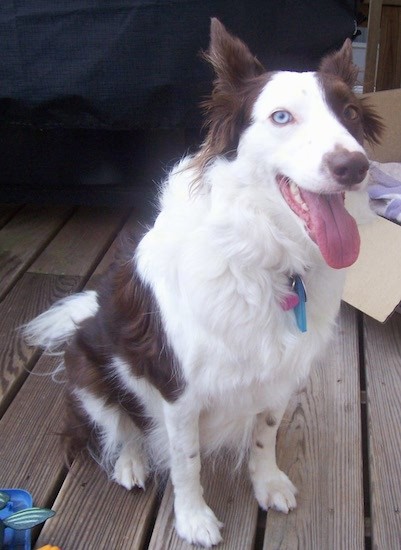 "Ruby the 2 year old brown and white Border Collie with one blue eye and brown eye. She loves her Mr. Squeaks toy and whipped cream!!" 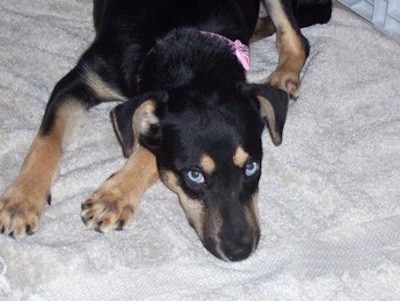 "Trixie has the prettiest eyes I've ever seen. She is 15 lbs (6.8 kg) at 5 months old and a Terrier mix. She loves to play and can jump four feet in the air. In this picture she just had a bath and was played with for over 2 hours. Now she knows it's bedtime. We adopted her at 4 and a half months and she's potty trained." 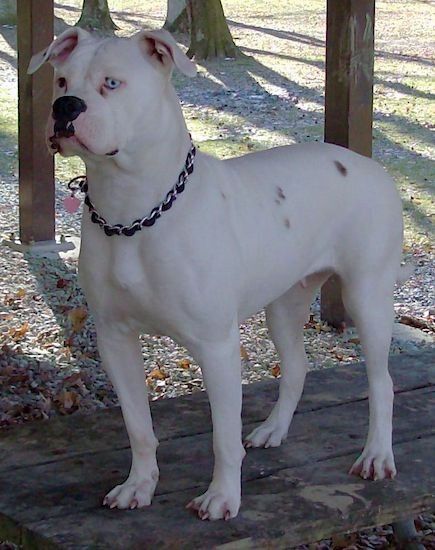 "This is my American Bulldog named Sky. She is 13 months old in this picture and weighs approximately 70 pounds (31 kg.) and 24 inches (61 cm.) high. She is mostly white with one large brindle spot behind her right shoulder and a bunch of little ones all over. She also has one blue eye and one brown eye. Her temperament is very friendly and playful. She loves kids and other dogs. When she is excited she wags her butt more than her tail. She likes to sleep with her head on a pillow and covered up with a blanket. She looks so cute but snores real loud. Her only bad habit right now is that she still chews on some things every now and then. She gets a lot of exercise in the backyard and goes to the park. 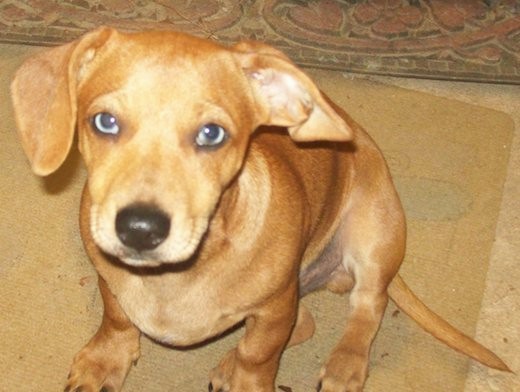 "This is Duece as a puppy. He is a ChiWeenie. Duece was the second-born, hence the name, Duece. His momma is a black and white Chihuahua and his daddy is a rust-colored Dachshund. Duece is a very out-going dog. He loves to cuddle with everyone in the family, and he will bark at you to get your attention! He gets his blue eyes from his daddy, Sammy, and the short snout from his momma, Mya. Duece is one of six puppies out of the litter. He is loveable and mellow, just like his daddy." 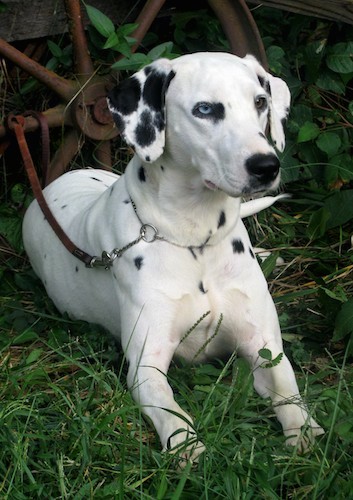 "This is my 2 year old female, black and white Dalmatian with one blue eye and one brown eye. She is very smart and willing to work and learn anything, anytime. Her name is Muddy Pawz Secret of Rip Roarin. AKA " Secret""