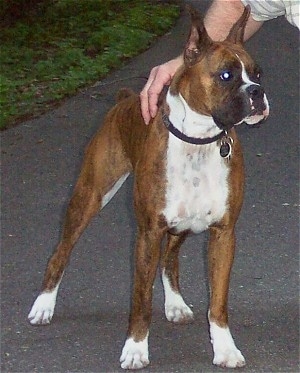 Greta, a good example of an American Boxer

The Boxer's body is compact and powerful. The head is in proportion with the body. The muzzle is short and blunt with a distinct stop. The nose is large and black with very open nostrils. The jaw has an under bite. The eyes are dark brown. The ears are set high, either cropped or kept natural. When cropped they are trained to stand up on the head, tapering to a point. When left natural the ears are thin, falling forward, lying close to the head. The neck should be round, strong and muscular, without a dewlap. The muscular front legs are straight and parallel when viewed from the front. The back legs are well muscled. The tail is set high and usually docked. The AKC severely penalizes a natural tail, while most of Europe has outlawed this practice. Dewclaws are usually removed. The short, smooth, close-fitting coat comes in fawn, brindle, tan, mahogany and black often with white markings. Boxers also come in a white coat that cannot be registered with some clubs.

The Boxer is happy, high-spirited, playful, curious and energetic. Highly intelligent, eager and quick to learn, the Boxer is a good dog for competitive obedience. It is constantly on the move and bonds very closely with the family. Loyal and affectionate, Boxers are known for the way they get along so well with children. A well brought-up and properly socialized Boxer will also get along with his own kind and other household pets such as cats. Animals such as rodents, ducks, chickens and other farm birds may be too tempting, however, they can be taught to "leave it" but it is still not recommended they be left alone with them. It has been said that the name Boxer came from the way the Boxer likes to use his front paws for just about everything. If you have ever watched a Boxer go about his business you may have noticed the way he paws at his toys, food bowl and you for that matter, in a very playful cat-like way. While participating the sport of Schutzhund, Boxers are known to jump up and use their front paws as if they are boxing. They are very clownish and playful. The Boxer's nature is to protect you, your family, and your home. Known visitors will be welcomed. They are always keen to work and play. Boxers need lots of human leadership. Teach the Boxer not to be boisterous and especially not to jump up at people. This breed is noted for courage and makes a great guard dogs. Boxers have a wide use in military and police work. An excellent watchdog, the Boxer will restrain an intruder in the same way a Bulldog does. They are extremely athletic, sometimes even in their old age. This dog needs to go on a daily pack walk. Daily mental and physical exercise is paramount. Without it, the Boxer will become high strung. This breed requires a dominant owner. Training should start young and be firm and consistent. The objective in training this dog is to achieve pack leader status. It is a natural instinct for a dog to have an order in its pack. When we humans live with dogs, we become their pack. The entire pack cooperates under a single leader; lines are clearly defined. You and all other humans MUST be higher up in the order than the dog. That is the only way your relationship can be a success. Meek Boxer owners will find their dogs to become stubborn. If they do not take you seriously they will be sneaky, demanding, boisterous and hard to control. Teach the Boxer dominating another dog is not acceptable. Any signs of dominance need to be immediately corrected by the owners in a calm, but firm, confident way.

Some major concerns are cardiomyopathy and other heart problems, sub-aortic stenosis and thyroid. Can be prone to skin and other allergies. Sometimes prone to epilepsy. From age eight on they are more likely to get tumors than other breeds. Prone to cancer. Boxers are highly prone to mast cell tumors. Prone to arthritis, hip dysplasia, back and knee issues. These dogs may drool and snore. May have excessive flatulence, especially when fed something other than their own dog food. Some white Boxers are prone to deafness.

Boxers will do okay in an apartment if sufficiently exercised. They are fairly active indoors and do best with at least an average-sized yard. Boxers are temperature sensitive, getting easily overheated and chilling very quickly.

An active, athletic breed, Boxers need daily work or exercise, as well as a long brisk, daily walk. They also enjoy fetching a ball or other sessions of play.

The Boxer's smooth, shorthaired coat is easy to groom. Brush with a firm bristle brush, and bathe only when necessary, for it removes the natural oils from the skin. Some Boxers try and keep themselves clean, grooming themselves like a cat, although some cannot resist rolling in another animal’s poop, which calls for a bath. This breed is an average shedder.

The Boxer was developed in Germany in the 19th century. The Boxer's ancestors were two German mastiff type dogs, the Bullenbeiszer and the Barenbeiszer. They were later crossed with the powerful ancestors of the Mastiff and Bulldog. Early Boxers were used for dog fighting, bull baiting, cart pulling, as cattle dogs, to round up livestock and to catch and pin wild boar and bison until hunters could arrive. They later became popular theater and circus dogs. The first Boxer studbook was started in 1904. Up until then the dogs varied widely in looks and size. The Boxer is known for the way it uses its front legs to bat at its opponent, appearing to be boxing, most likely giving the dog its name. Some of the Boxer's talents are watchdog, guarding, police work, military work, search and rescue, competitive obedience, Schutzhund and performing tricks. Breeders are breeding two types of Boxers, the German Boxer and the American Boxer. German Boxers have bigger heads and are generally more muscular than American Boxers. 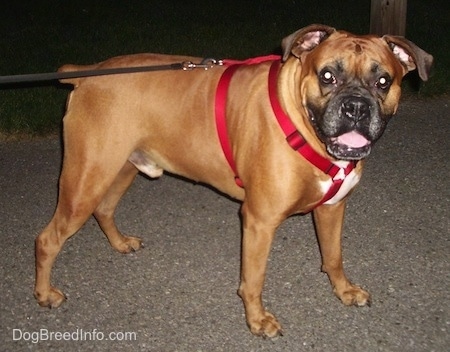 Bruiser the Boxer at 8 years old 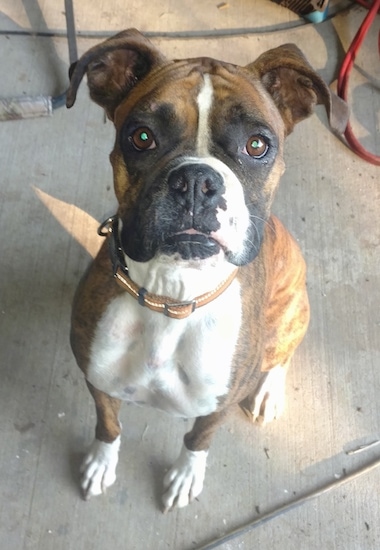 "Hey Yall! My name is Lilly! I'm 2 years old and I just found my forever Mommy and Daddy :) They just found out that I snore ALL night long, but that's okay, so does my daddy!! I have a sister named Rascal, she's a Chihuahua and she does like me very much. Mommy says I have to play nice but all I want to do is sniff her!! I think I hear Mommy getting my food! Gotta run!!!" 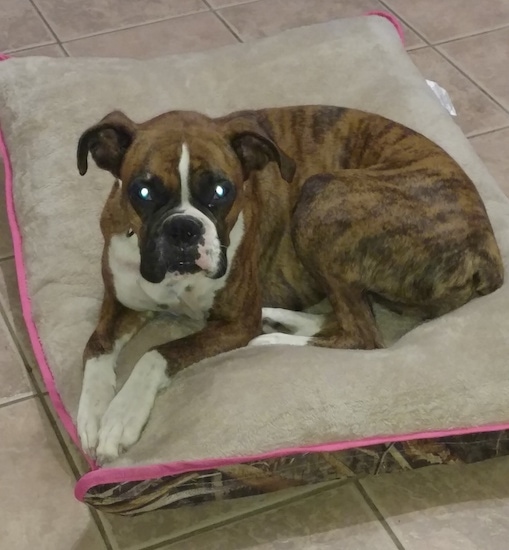 Lilly the Boxer at 2 years old 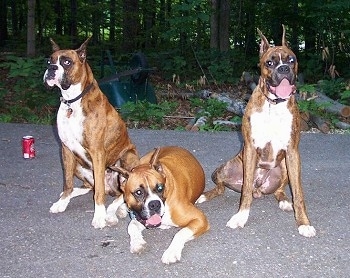 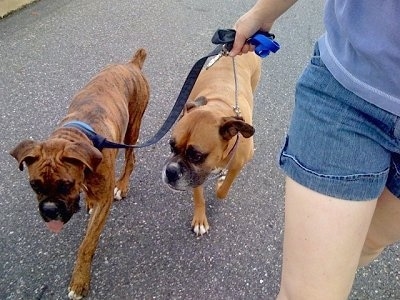 Bruno, (left) a 5-month-old brindle Boxer puppy with Allie (right) a 7-year-old fawn Boxer, out for a walk—Boxers are high-energy dogs and need to be walked daily; without proper exercise they can get themselves into a lot of mischief. Be sure to walk your Boxer beside or behind you, keeping slack on the leash (no tension); never let him pull in front of you. The pack leader goes first. 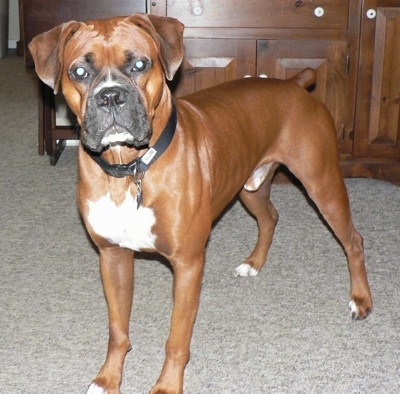 "This is Midas, my first Boxer. I researched this website extensively to find the best breed for my family since we have 3 children, the youngest being only 1 1/2 at the time. Wow, I cannot get over how WONDERFUL Boxers are! My now 3-year-old can squeeze him and dress him up and run over him with her doll stroller and he doesn't care! He is a big goofball, but is very smart. He learned to "give paw" in 5 minutes. He has a toy we call his "baby" and he will always run get it if you ask him where it is. I love Cesar the Dog Whisperer and have found that he was right on when he tells you to exercise your dogs! If Midas isn't getting enough exercise with us, you can guarantee he will be sneaking into the recycle bin to create his own game of "fill the yard with milk jugs." Don't get mad at your dog—go spend some time with him! We are now looking to add a second Boxer to the family, and don't think I will ever own another kind of dog!" 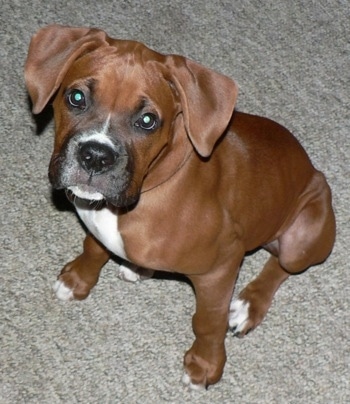 Midas the Boxer as a puppy 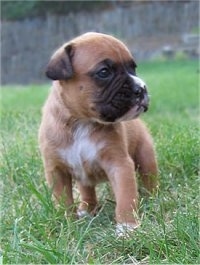 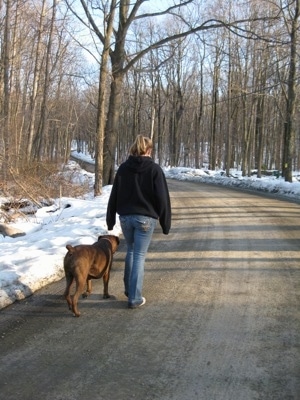 "Amie taking Bruno the Boxer for a walk off-leash—Amie was able to communicate with Bruno that she wanted him to heel next to her by calling him over and using a hand signal to not pass her. If he got a few steps ahead she would simply touch his back with her fingers or make a sound and he would slow down. Since Amie is 100% pack leader Bruno is very responsive to her commands. Without saying a word if Amie turns, Bruno turns. If she stops, he stops. He is happily and willingly following her."

See more examples of the Boxer