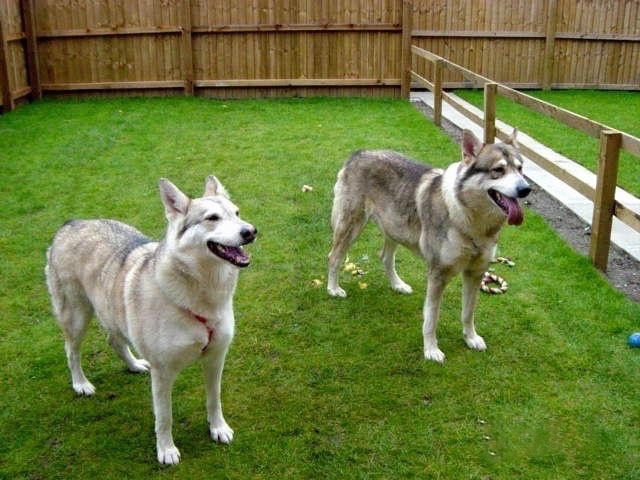 Utonagan dogs Bonnie (left) Clyde (right) at 3 years old— "Bonnie and Clyde are our family dogs. They are from the same litter and are always together. We take them to the local nursing home where they walk around and see the patients. We also have taken them to the children's hospital near us. Clyde is sure to alert us whenever someone is coming and Bonnie has a soft howl that she "preforms" when she is happy. I have trained Bonnie and Clyde to pull everything from skateboards to bikes to sleds. We take Bonnie and Clyde up north in the winter so that they can be in the snow. Bonnie and Clyde are affectionate all of the time and can get a little destructive when they are left alone for too long. However, we couldn't ask for two better dogs. ^.^"

Utonagans are large, strong and muscular but are not heavy in build. While they are not wolves they are bred to look like them with a diversity of colors and an overall balance of power, speed and agility. The head should not be too broad or overly domed and should be in proportion to the size of the dog. The stop should be slight and not too severe. The muzzle is slightly longer than the skull and the lips should be firm, closing tightly. The nose is black. The eyes are almond in shape. Eye color ranges from brown to amber or yellow (preferred). Blue eyes are considered a fault. The ears are small in comparison to the head and are slightly rounded at the tip. They are set well spaced so as to create a triangular cast to the overall shape of the face. Soft ears are to be considered a fault. A long tapered muzzle with well developed powerful jaws is preferred. Flews should be black and tight. Complete dentition and perfect scissor bite, i.e. upper teeth closely overlapping lower teeth and set square to the jaws. Undershot or overshot jaws are highly undesirable. The lips are black. The neck is fairly long and strong with well developed muscles. The shoulders moderately sloping. The forelegs are long, straight and fine boned in comparison to the body. Viewed from the front the forelegs are narrowly spaced, parallel and straight with the elbows close to the body, turning neither in nor out. The length from the elbow to the ground is slightly more than the distance from the elbow to the withers. The pasterns are strong. Utonagans have a streamlined chest. Their body is fairly long with a level topline from the withers to the croup. A slight slope of the croup is acceptable. The ribs are well formed and long and the loins well muscled and taut with a slight tuck up. When viewed from the rear the hind legs are well spaced and parallel. The thighs are well muscled and powerful with a reasonable bend of the stifle with strong hocks. The paws are webbed. The front paws are large, oval in shape, turning neither in nor out when viewed from the front in a normal stance. The back paws are smaller and when viewed from the rear in a normal stance are preferably forward facing. Dew claws on the hind feet are to be considered a fault. The tail should be evenly furred but not overly feathered and should hang straight to the hock. It is carried straight and high when excited or at a trot. The tail should not curl over the back or be present in front of the vertical. Spitz/curly tails are to be considered a fault regardless of the degree of the curl. A black tail tip and black diamond shaped scent gland mark are preferable in colored dogs. The gait is long, loping and effortless with a powerful drive from the hindquarters. The coat is thick. A double coat is preferred, preferably with a mane during winter months. Short flat/long flat coat are both acceptable but less desirable. The guard hairs of the outer coat are straight and smooth lying. In longer coated dogs, excessive feathering around the ears, abdomen, legs and tail is not desirable. Coat colors include a grizzled combination of grey, black, tan and buff all with a clearly defined mask, single colors of black, white or apricot or white with a mask. Pied or ink marked colors are undesirable.

Utonagans are not guard dogs and were not bred for any specific working ability, but can be trained for many tasks. The original goal was to breed them with the looks of a wolf. Intelligent and friendly, they generally like all people and get along well with children. They are active, alert and capable of great endurance. Utonagans are energetic and enthusiastic towards most tasks with quick reactions. This breed may howl. The breed does best with an owner who can provide calm, consistent, firm leadership and daily mental and physical exercise.

They are not usually recommended for apartments, however they can live in an apartment if well trained and properly exercised. Utonagans do best with a fenced-in large yard. Because of their heavy coats, these dogs prefer cool climates. One has to use common sense with respect to maintaining them in the heat by providing adequate shade and air conditioning.

Utonagans are active and need a fair amount of exercise, including a daily walk or jog, but should not be excessively exercised in warm weather. They do best in a large yard with a high fence.

The thick double coat sheds heavily twice a year. During that time they need to be brushed and combed daily.

Originally advertised as a wolf hybrid, the Utonagans were developed in England by Edwina Harrison in 1987. The breed does not have any wolf in their lines, but were bred to look like they do. The breeding began with 5 rescued dogs of unknown origin and later German Shepherd, Siberian Husky and Alaskan Malamute were added into the lines. The word Utonagan is taken from a Chinook tale meaning "Spirit of the Wolf."