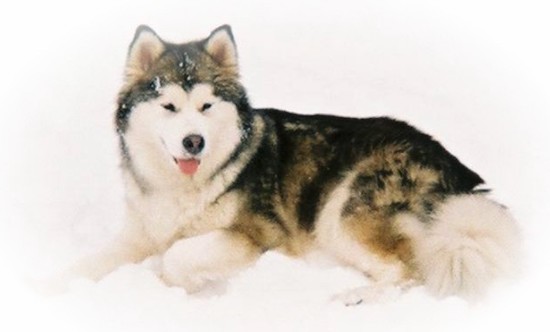 The Alaskan Malamute is the largest of the Arctic dogs. This thick, well-built dog is solid with a plumed tail that is held over the back. The head is wide with erect ears. The eyes are of medium size, dark brown small, and almond in shape and are obliquely placed in the skull. The dog holds an image of a wolf but with a proud, sweet expression. Dark eyes are preferred; blue eyes are a fault according to the written standard. The feet are large, of the snowshoe type with tough pads. The thick, coarse double coat averages one to three inches in length and comes in a range of light gray to intermediate shadings of black, sable and shadings of sable to red. Combinations include wolf gray, black and white, wolf sable (red undercoat with dark gray outer coat) or red. The only solid color allowed is white. The dog often has darker highlights and sometimes has a dark mask or cap. The legs and muzzle are almost always white. In some areas, dogs may be either smaller or larger than the official standard.

The Alaskan Malamute is extremely loyal and intelligent, sweet and most affectionate toward its master. Great with children who are old enough to play with him safely. If its canine instincts are met, it matures into a dignified and mellow adult dog. They are very friendly and therefore are not suitable as guard dogs. Malamutes are happiest living outdoors as long as they receive enough companionship, but they also enjoy living indoors where their human "pack" lives. Without firm leadership and daily mental and physical exercise, these dogs may become destructive nuisances, acting like big, rambunctious puppies. In one case, a single dog ruined an entire living room of furniture valued at $15,000 in just three hours! Malamutes love outdoor activities and even do well in obedience with firm encouragement. Although it can be difficult to train Malamutes for formal obedience, it is not particularly hard to train them to be well-mannered because they love to please. Males can be very dominant. This breed needs the humans around him to be firm, confident and consistent pack leaders. Some dogs may be difficult to housebreak. This breed is a thrifty feeder and needs less food than you might expect. However they do tend to wolf down whatever is offered, which can lead to obesity and bloat. Malamutes are quiet compared to most dogs but they do like to howl and dig. This breed should be supervised around unfamiliar small animals, as they have a strong prey instinct. This does not mean they are not good with small animals; some Malamutes have been known to raise small kittens as their own. Both sexes can be combative with other dogs, especially with the same sex and breed and firm handling and training are necessary to curb this. Proper socialization with people and other dogs is imperative. Obedience training is highly recommended.

The Alaskan Malamute is prone to bloat, hip dysplasia and chondrodysplasia (dwarfism).

Alaskan Malamutes are not recommended for apartment life. They are fairly active indoors and should have at least a large yard. If you live in a suburban area, a high fence is a must, but bury the base, because they are likely to dig their way out. The Alaskan Malamute likes to roam in what he considers to be his territory. The Malamutes coat allows them to withstand extreme cold, but be careful to keep the dogs cool in hot climates. Make sure they have shade and plenty of clean cool water.

Malamutes need a reasonable amount of exercise which include long daily walks. But be careful not to overdo it in warm weather.

The Alaskan Malamute has a dense coat that should be brushed twice a week. This breed sheds very heavily. The undercoat comes out in clumps twice a year. Bathing is most unnecessary, as the coat sheds dirt readily. Dry shampoo occasionally. This dog is clean and odorless.

The Alaskan Malamute is a Nordic sled dog descended from the Arctic wolf. Its name comes from Mahlemuts, an Alaskan tribe that raised and cared for these beautiful snow dogs. Originally used 2000 to 3000 years ago by these Mahlemuit Eskimos of Alaska, these highly valued dogs were their only form of transportation. These amazing dogs have strength and endurance with a will to work. They pulled not only light traveling sleds, but they also hauled heavy loads of food and supplies for the Arctic people. Packs of Malamutes have participated in many polar expeditions, for which they are particularly well adapted due to their tenacity, sense of direction, and excellent sense of smell. They have appeared as unforgettable characters in the stories of Jack London and Rudyard Kipling. The Malamute went with Admiral Byrd's expeditions to the South Pole. The Alaskan Malamute is cousins with the Arctic breeds Siberian Husky, Samoyed, and the American Eskimo dog. Some of the Alaskan Malamute's talents are sledding, carting, search and rescue, weight pulling and racing. 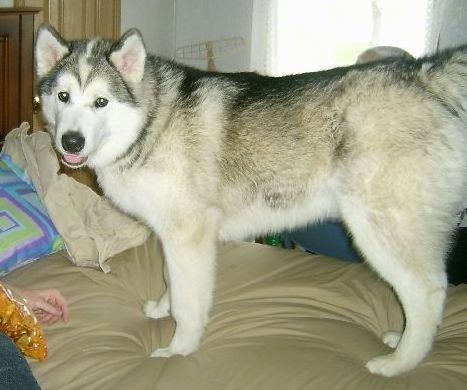 "This is Shadow my Alaskan Malamute at 6 months old weighing 80 pounds. He's very ornery. He loves to play and be outside. He is like a garbage disposal and would eat anything if he could." 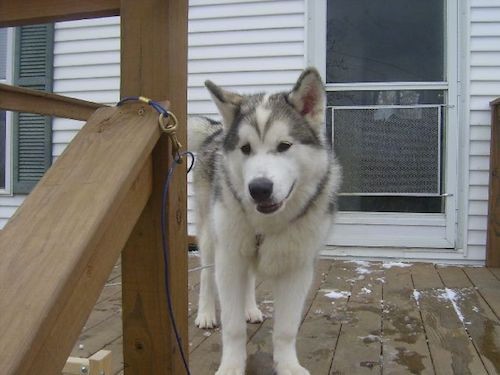 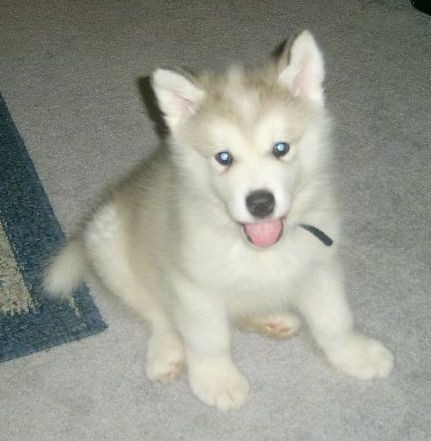 Shadow the Alaskan Malamute as a puppy at 6 weeks old.