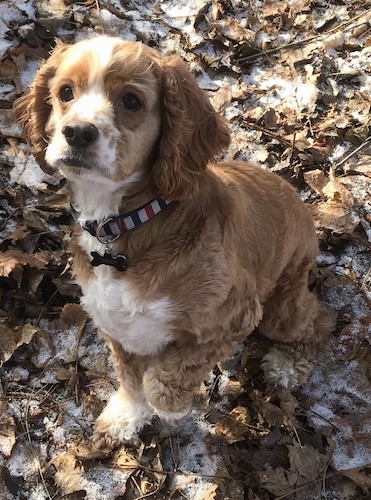 "This is Charlie at 4 years old with his hair groomed in a puppy cut. He lives happily with his family in Toronto Ontario. Charlie loves to fetch and play with his newborn human baby brother. He is so sweet and full of love."

The Cocker Spaniel is a medium sized, sturdy dog. The head is rounded with a pronounced stop. The muzzle is broad and deep with square, even jaws. The teeth meet in a scissors bite. The eyeballs are dark, very round with slight almond shaped eye rims. Merle Cocker Spaniels can have blue eyes. The long, low-set ears are well feathered. The topline slopes slightly from the front of the dog to the back and the legs are straight. The tail is often docked. Note: docking tails is illegal in most parts of Europe. The dewclaws may be removed. The silky coat is flat or slightly wavy. The hairs are medium length on the body but short and fine on the head. There is feathering on the ears, chest, abdomen and legs. The coat comes in any solid color, black with tan points, merle, solid color with tan points and parti-color. Examples of parti color combinations are white with buff or red, white with black, or white with black and tan points. Field lines have shorter coats than show lines.

Bold and keen to work, the American Cocker Spaniel is equally suited to life as a gundog or as a household pet. Cheerful, gentle and sweet, this breed is of average intelligence and is respectful of its master's authority. Amusing, trustworthy and charming with an ever-wagging tail, it is active, playful and devoted, but should be socialized well when it is young to avoid a tendency for shyness. Cockers that understand their place is under humans are good with children. They love everyone and need firm, loving leadership and daily exercise to be happy. They can be difficult to housebreak. They are mostly easy to train and get along well with other animals. Do not allow this dog to develop Small Dog Syndrome, human induced behaviors where the dog believes he is pack leader to all humans. This can cause a varying degree of behavior issues and is where a lot of owners go wrong. The goal with all dogs is to achieve pack leader status. It is natural instinct for a dog to have an order in its pack. When we humans live with dogs, we become their pack. The entire pack cooperates under a single leader; lines are clearly defined, and rules are set. You and all other humans MUST be higher up in the order than the dog. Owners who allow their dogs to believe they are higher up in the order and/or who do not provide daily mental and physical exercise will experience a whole different temperament than the one described above. The dog may develop shy-sharpness, which is a combination of fear and dominance that can cause viciousness. Submissive urinating is usually caused by overexcitement, a lack of daily mental and physical exercise, where they are wound up and their minds are not given the chance to calm down on a daily basis. Also aggressive guarding of objects, people and places, obsessive barking, hyperactivity and roaming, among other negative behaviors. There are two types, field lines and show lines. Field lines are bred for working and have better hunting instincts and shorter coats, which is more practical for working in the woods. Both types make good pets when the owners meet their needs as canine animals.

"Our Cocker never had a sick day in her life until she suddenly became lethargic and urinated blood. Six days later and $3000 in vet bills, she died. I know you can't list every illness due to space limitations, but the internal medicine specialist that treated our dog said that IMHA is relatively common in Cockers, and almost always fatal. It's a fast-acting, silent killer."

Reported by Cocker Spaniel owner—"My American Cocker Spaniel dog died on 9/26/2011 of IMHA. She was given immunizations on 9/20 and showed first signs of a problem on 9/22. She was 6 1/2 years old in good health. Please pass on that owners of American Cockers need to be acutely aware of this disease and the possibility of their dogs contracting it. They should always have a blood test before immunization and at any sign of a problem afterwards should immediately seek treatment from a vet. We knew nothing of the disease and were never advised by the vet of the possibility in this breed. We have since learned it is common and needs to be looked for in this breed and age dog. Vets need to make sure owners are aware of it and the possible relationship with vaccinations. I just want to help get the word out."

"My dog also died of this disease (IMHA). He was 7 1/2 years old. He showed no signs of being ill until two days before he died. The disease works rapidly. At the first sign of becoming ill the pet needs to be brought to the vet and will probably need a blood transfusion. Our vet decided to wait and see in the morning, by then it was too late. This disease does not always stem from vaccines; my dog was not due for shots for another two months.”

Cockers will do okay in an apartment if they are adequately exercised. They are fairly active indoors. A small yard is sufficient. Not suited to live outside alone in a kennel.

American Cockers have plenty of stamina and need regular exercise. They should be taken on daily, long walks. When walking, avoid brushy thickets that can tangle the coat. Be sure to have the dog heeling beside or behind the person holding the lead, as in a dog's mind the leader leads the way, and that leader needs to be the human, not the dog.

Wipe under the eyes often as they tend to tear. Some owners prefer to leave the coat long, brushing daily and shampooing frequently with quarterly scissoring and clipping. Others prefer to clip the coat to medium length to be more functional. Either way, the dog will need regular trimming. When brushing, be careful not to pull out the silky hair. This breed is an average shedder. 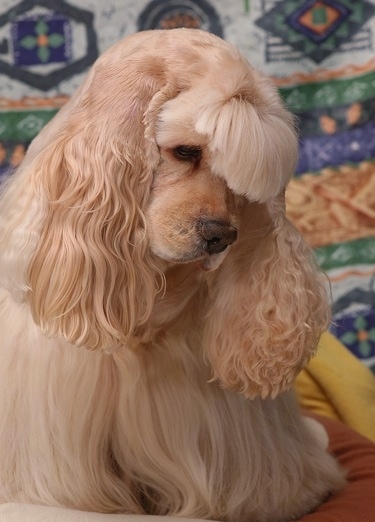 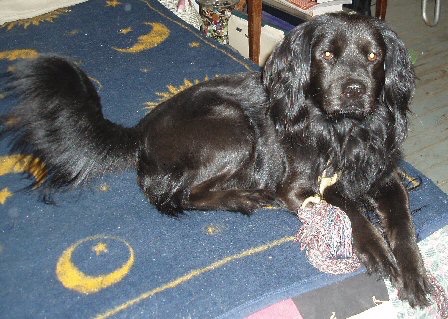 Chewy is a black American Cocker Spaniel with an undocked tail groomed in a pet cut. 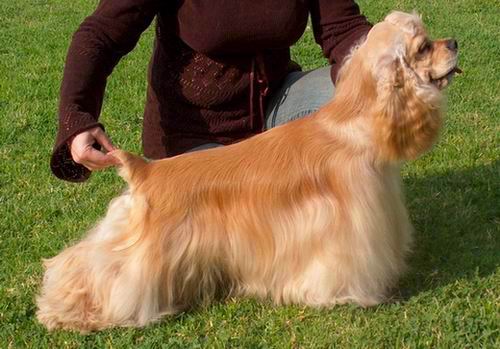 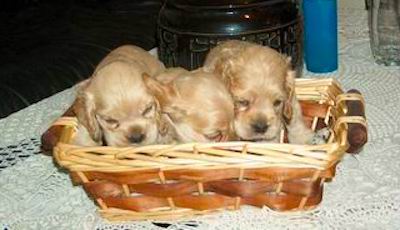 A litter of Cocker Spaniel puppies at 2 weeks old