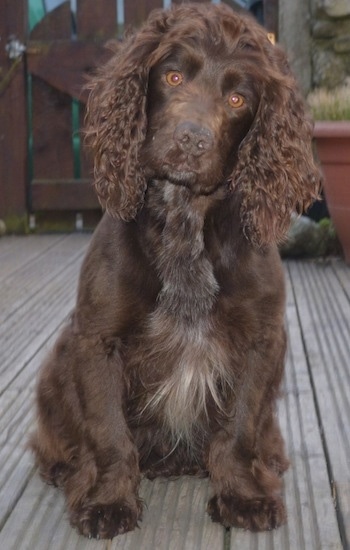 Eddie the English Cocker Spaniel at 2 1/2 years old— "Eddie is a really laid back Cocker. He is a good working dog, but still loves a cuddle."

The English Cocker Spaniel is a medium-sized, compact dog. The head is arched and looks slightly flattened when viewed from the side. The muzzle is the same length as the head with a defined stop. The nose is black or brown depending on the coat color. The teeth meet in a scissors or level bite. The medium-sized, oval eyes are dark brown or hazel in liver-colored dogs. The ears are set low and hanging long covered in silky or wavy hair. The chest is deep and the front legs are straight. The topline is almost level, sloping slightly from the front to the back of the dog. The tail is usually docked. Note: docking the tail is illegal in most parts of Europe. The cat-like feet have tight arched toes. The hairs are medium length on the body but short and fine on the head. There is feathering on the ears, chest, abdomen and legs. Coat colors come in solid black, liver or red or parti coloring of white with black, liver or red markings or ticking. Many colors are admissible, but on solid color dogs white is acceptable only on the chest. There are sometimes tan markings on black, liver or parti-colored dogs. The parti color dogs are often called "roans." There is a blue roan which is a black and white parti where the hair intermingles with white giving it a blue appearance. The brown roan, chocolate roan or liver roan are brown and white parti color coats with brown hairs intermingling in the white. Orange roan, red roan, or strawberry roan are red and white parti color coats with red hairs intermingling with the white hairs. These coats sometimes have tan points. There are two types of English Cocker: field and show. The show types have longer coats than the field/working types.

The English Cocker Spaniel is an intelligent, sturdy and robust dog. Lively, perky and lovable, pleasant, gentle, playful and affectionate, they are excellent with children. They are average barkers, and are willing and happy to listen to their owners. A superior companion dog. Generally an outgoing breed, taking to strangers easily, some individuals can be reserved without enough socialization. This breed can do well with family cats. There are two types, field lines and show lines (bench). Field types are bred for hunting and field trial work. The bench type is bred for conformation shows. Both types are energetic and need daily exercise, but field lines have a higher energy level, and need even more exercise. The dominancy level in this breed varies widely even within the same litter. They are sensitive to the tone of one's voice and will not listen if they sense they are stronger-minded than their owner, however they will also not respond well to harsh discipline. If you are not the type of person who can display a natural air of calm, but firm authority, then be sure to choose a pup that is more submissive. The temperament of both show and field lines vary widely, depending upon how the owners treat the dog and how much and what type of exercise they provide. Those individuals that are not taken for daily walks, allowed to believe they are alpha over humans and/or that are treated like little humans with four legs end up with a varying degree of behavior and/or temperament issues. Those individuals that are given consistent structure, calm, stern authority, with rules made clear and daily walks where the dog is made to heel beside or behind the human have the best temperaments.

Prone to ear infections. During the summer, the ears should be checked often. Hanging close to the ground as they do, they can become host to ticks or burrs, often the cause of deafness. Gains weight easily; do not overfeed.

The English Cocker Spaniel will do okay in an apartment if it is sufficiently exercised. They do best with at least an average-sized yard.

The English Cocker Spaniel enjoys as much exercise as you can give it. They need to be taken on a daily walk, where the dog is made to heel beside or behind the person holding the lead. Dogs who are allowed to walk in front of the human instinctually believe they are alpha over humans, as in a dog's mind, the pack leader goes first.

Regular combing and brushing of the coat is important. Coat types vary within the breed. Some coats have an excess amount of cottony hair and are prone to matting, while others are more silky and flat-laying and are less prone to matting. Bathe or dry shampoo as necessary. Check the ears for grass seeds and signs of infection. Clean out excess wax regularly. Brush the hair on the feet down over the toes and trim it level with the base of the feet. Trim the hair around the pads, but not between the toes. Brush out burrs and tangles after the dog has been playing in the grassy fields or woods. This breed is an average shedder.

The English Cocker Spaniel is one of the oldest spaniels known. Originally known as a general spaniel-type dog that was imported into England centuries ago, the dogs were divided into seven different spaniel breeds: the English Springer, the Cocker Spaniel, the Clumber, the Sussex, the Welsh Springer, the Field, and the Irish Water. The Cocker and Springer Spaniels developed together, with only size differentiating them until 1892, when the Kennel Club of England recognized them as separate breeds. In 1946 the American and Canadian Kennel Clubs recognized the English Cocker Spaniel as a separate breed from the American Cocker Spaniel. The Cocker Spaniel is a hunting-gun dog able to work in difficult terrain in both wet and dry land. Excellent at flushing and retrieving game with a gentle mouth. It listens to commands well. The name "Cocker" comes from the woodcock, a game bird the dogs were known for flushing. Some of the English Cocker Spaniel’s talents are hunting, tracking, retrieving, watchdog, agility and competitive obedience. 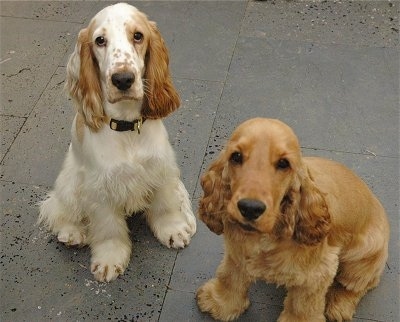 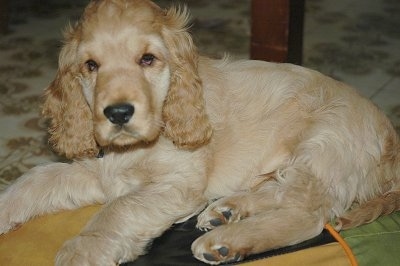 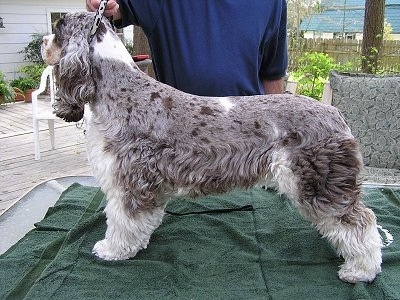 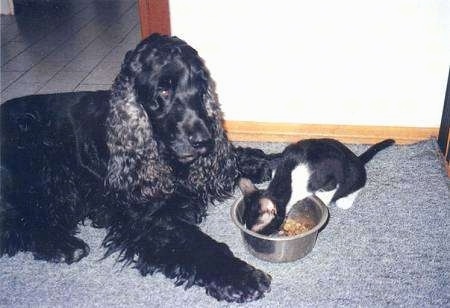 Bleki sharing his food with his best friend Cikita the cat.

English Cockers Kenny and Blue—"English Cocker Spaniels are a new breed to me and I was thrilled to discover the English Cocker as a breed to add to my family. These little dogs are comical and fun-loving, although sometimes reserved around new people and situations. They quickly adapt and seem to enjoy other dogs, swimming and wrestling around. I started with one but found that my Cocker seemed a little lonesome even though I have other dogs. When I started bringing a littermate home for play dates I discovered their true identity. It wasn't long before that littermate became mine as well. These are tough little dogs that enjoy playtime and cuddle time and are easily trained. Very food motivated so with a cookie in your hand they will follow you anywhere! Built low to the ground but solid and pretty indestructible. I would easily think they would do well around children. They really do shine their brightest when in pairs." 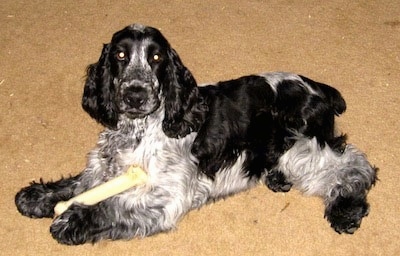 Blue the English Cocker Spaniel chewing on his bone 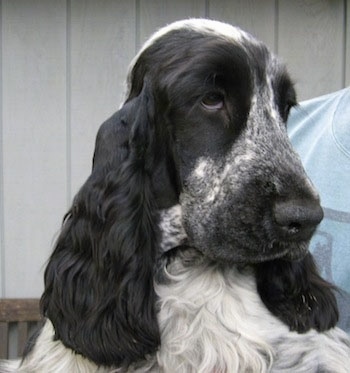 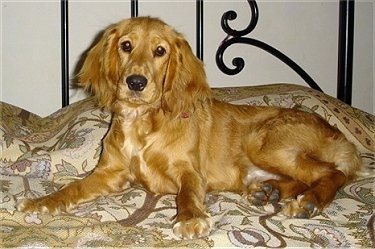 Zoie the 8-month-old English Cocker Spaniel from India on the bed. 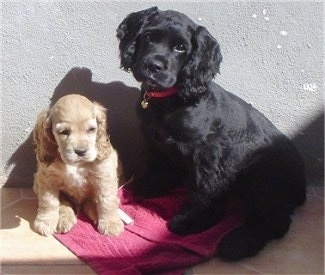 Terry and Koky the English Cocker Spaniel puppies—Terry is 2 ½ months old and Koky is 4 months old. 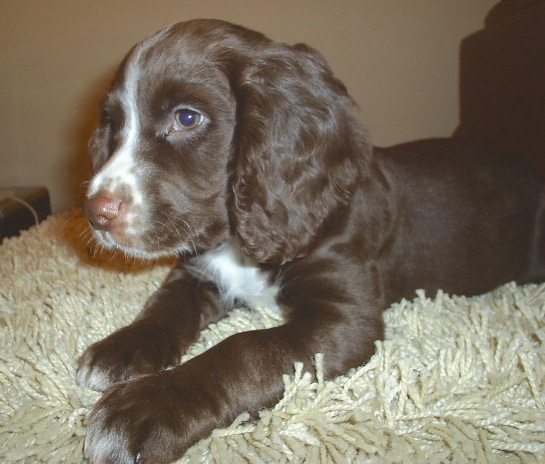