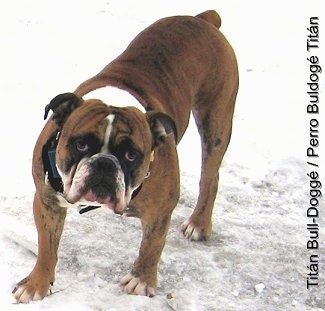 Function: All-around working dog. Excels in guard duties and protection. A great family companion.
Appearance: Medium to medium-large size dog, powerfully built and showing tremendous strength. The dog should be alert, with a symmetrical, well-proportioned body. The dog should look very athletic while remaining bully. The dog is confident and looks always on the ready.
Head: The head should be massive on males and large on females, in proportion to the body. Deeply sunken between the eyes, extending up the forehead. The wrinkles on the head should be moderate. Jaw muscles large. Lower jaw should be even or slightly protruding. Bite squared, undershot should be minimal if any. Eyes low and should be set wide. Forehead flat. Muzzle short, broad and deep (of square-like appearance). Flews semi-pendulous. Ears may be either rose or button and should be set high and wide. Dewlap will have two folds.
*Note: Blue eyes are acceptable but not preferred.
Body: Neck should be short and nearly wide as the head (Bull Neck- thick and well-muscled). Shoulders very broad and muscular. Front legs straight or slightly bowed. Ribs well rounded. Chest wide (should be pumped forward when the dog is on the ready). Back short and strong. Belly well tucked up. Thighs very muscular. Rear legs neither pigeon-toed or cow hocked, well-muscled.
Coat: Short, close and medium fine.
Color: All color variations
Red tiger brindle has been the preferred color of current Titan Bull-Dogge owners.
Tail: May have a natural or a docked tail, with no preference given to either. The natural tail is very thick at the base, and tapers to a point. The tail is set low. A "pump handle" tail is preferred, but any tail carriage from upright, when the dog is excited, to relaxed between the hocks is acceptable.
Serious fault: Tail curled over the back; corkscrew tail; upright tail when the dog is relaxed.
Gait: Fluent movement is of the highest concern. The dog should have a smooth, strong glide.
Note: Male animals should have two apparently normal testicles fully descended into the scrotum.
Penalty: Any deviation from the approved ASWRB Standard should be penalized to the extent of the fault up to disqualification.

The animal should be self-assured, outgoing, and should show a natural ability to protect owner and property. The dog, because of its function, should be aloof of strangers to a point of analyzing the situation and not to the point of aggression. The dog should be at peace with those that are accepted into the master’s circle. A family member that loves children and will not hesitate to protect, it gets along with other pets. This breed is not generally dog aggressive. Needs a strong, firm, consistent, confident pack leader who can keep him in this rightful place, below all humans in the alpha order.

Will do well in an apartment if exercised regularly.

This Bulldogge must receive daily exercise. Long walks or runs are necessary.

Soft brushing. Must clean wrinkles with cloth on a daily basis.

Today, we believe that the combination of these breeds in conjunction with the selected percentages have given us the desired attributes we intended to have when research was begun in 1991. After years of selective breeding and a large amount of consistency, Hector “Nino” Morales and the group of dedicated breeders that were such a big part of the creation of the TB put a written standard together. When necessary, a limited amount of outcrossing has been done, and will continue to be done to assure the continued health, temperament and workability of the Titan Bull-Dogge. Puppies from these breedings will be registered through the American Society of Rare & Working Breeds as Titan Bull-Dogge Program Outcrosses, and will contribute to the positive development of the Titan Bull-Dogge.

The Titan program is in early stages compared to other bulldogge programs, but much planning, time, effort and dedication have gone into the program. All the dogs that were used originally as foundation dogs were x-rayed and tested for genetic issues to assure a healthy beginning to this program. Through a very strict process of selective breeding we are today accomplishing what we set out to do all along, to put forward a program that in time will create a dog worthy of the chosen name Titan Bull-Dogge. We have come a long way but this is just the beginning.

The current registry for the Titan Bull-Dogge is the American Society of Rare & Working Breeds. If you hear of a Titan Bull-Dogge registered with another organization, this dog is not a Titan Bull-Dogge, as the Hector "Nino" Morales and family have copyrighted and trademarked ownership of the chosen breed name. 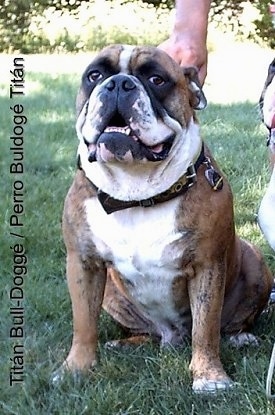 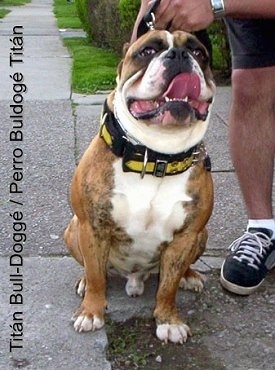 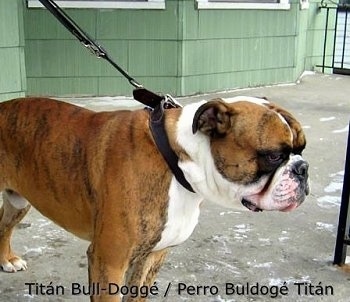