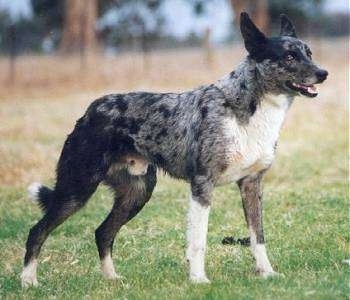 It once was common for Koolies to have one or two blue eyes, but since the DNA discovery linking blue eyes in Koolie to the merle gene, which creates blind/deaf pups, improved safer breeding practices with the encouraged merle to solid mating for the health of the breed and not the looks. We have seen a decline in blue eyed Koolies. The common eye colour today is brown eyes for reds and brown or black eyes for blacks, and tones of these two primary colours, occasionally you can still get blue eye(s), or part thereof, like chips, crescent even half but it is no longer common. Australian Koolie colours can be red or blue merle( patterned); solid (one colour) red/chocolate or black; bi (two colours) red and white, black and white, black and tan, red and tan; tricolor (three colours) including merle, normally with tan points and a white chest spot. Coat lengths come in smooth, short, short rough, medium, double coated or single, with feathers on their legs or without; long coats are not common.

The Koolie is first and foremost a working breed, bred for stamina, endurance and to be biddable. Like all working breeds the Koolies natural trait is to herd anything that moves, this includes sheep, cattle, goats, horses, buffalo and fowl. Koolies are known to naturally back (jump on the back of) sheep as well as cattle. Today we see the traditional working duties of the Koolie enlarged to include service, sports and human companionship, Koolies are not generally dog-aggressive and tolerate other species when introduced at a young age or handled by experienced owners, Koolies are devoted to the young, but there are always exceptions to the rule, never leave any child unattended with the dog. Australian Koolies have been worked on stock in Australia since the early 1800s. In order to keep up with the demands of the grazier and stockman the Koolie needed to have stamina for 14-hour days, ability to move from one type of job to another, be it driving cattle on the long mile, backing sheep in the race, or loading 10,000 head on a truck, the Koolie had to do it all. Its adaptability allowed it to be steady and calm around ewe and lamb yet still know when to use force, with bark or bite on scrub and gully bulls and steers, weathers or rams. The Koolie needed to be agile and quick, able to jump, dodge, race, hold, block and drive and do it well, and the Koolie has met these needs and continues to meet the need of their handlers. Not all Koolie pups are born with the strong natural traits of a worker and these pups are perfect for Service such as human assistance, SAR, Alert and bomb detection dogs as well as Sports like agility, endurance, utility and tracking, non-stock working Koolies still retain the stamina, ability and agility, many Koolies have been late bloomers, displaying their natural instincts as late as two years old. This breed must have mental stimulation, it will never do well in a small backyard with nothing to do. It is not recommended to purchase a Koolie from anyone other than a registered breeder who has the experience, understanding and the best interests of the breed at heart, who will help select the best koolie for the right owner, insure all medical needs are met, all paperwork is true and correct and who will offer support and guidance after the sale and if necessary take back their bloodline or help with rehoming. Here are a few average outcomes of impulse/blind buying, supplied by Koolie Rescue which gives a good clear picture of the problems which can and do occur. A lady thought she was doing a good deed when on impulse she bought a little Koolie girl from a farmer she was visiting, the pup was runty, full of worms and looked like it needed a good feed, her mother had been put back to work and the pup was only five weeks old, she felt sure the pup would die if left. This is how breeders for profit and puppy farmers like the general public to think, the sympathy deal, works every time. Instead of turning the farmer into the local shelter and putting a stop to his ruthless practice, she bought the pup, only to hand it into Koolie rescue six months later, because the little cute baby tore her clothes from the line, dug up every garden she ever planted, pooped and wet where ever she pleased and rounded up the children of the neighborhood after scaling their fences. The rescue placed her back on a farm where she has learned to work stock. A young man saw and bought a cute fluffy, blue-eyed, mostly white Koolie pup from a pet shop, (receiving nil information from the store owner), for his sweetheart on Valentine’s Day; she was in love the moment he presented her with the pup, at first they never noticed that the pup didn’t jump at sudden noises or during thunderstorms, it didn’t bark when the dog next door started up, didn’t turn his head when they entered the room, around twelve weeks old the couple noticed that he never came when they called but always came when he saw them, then finally while doing the dishes one night some were dropped and smashed, the dog continued to eat his bone with his back to the kitchen, and they realized their special bundle of joy was deaf. Through getting in touch with Koolie Rescue they were able be supported and received help with training their deaf Koolie and they have never regretted getting him, now five years old. These incidents are common not just for the Koolie but all breeds, the majority of Koolie Rescues are around six months to two years old, passed the cute stage and into the guidance, support, give me a job stage that demands much responsibility but for greater rewards than you can ever imagine or those who have outlived their usefulness and are too old to meet their handlers needs and the disabled. Contacting the puppy officer is the first step, for the safest and most protected form of enquiry. Always be your dog’s firm, but calm, consistent pack leader. Proper canine to human communication is essential.

The merle gene causes blind and or deaf pups; breeding merle to solid to stop this occurring is highly encouraged. Koolies can occasionally suffer joint problems due to their extreme athleticism, if they do a lot of jumping/twisting on and off things or after Frisbees and balls they can damage cartilage and ligaments, particularly as they get older. Some can be susceptible to minor allergies of the skin or immune system issues and to chemicals such as round up or other herbicides and in extreme rare cases can suffer seizers that can increase in severity if left untreated and can cause eventually death, this condition occurs in many breeds it is not exclusive just to the Koolie breed, the numbers of recorded cases has been small, and with careful breeding for a balanced Koolie and no focus breeding, putting the value of one ability above another, such as colour, type or traits the Koolie will remain free of genetic disease into the future. Koolies currently have the cleanest DNA genetic diversity in the world.

The Australian Koolie is not meant for an isolated life. It is moderately active indoors and will do best with at least a large yard and is best suited for people working from home, or able to take their Koolie to work with them, families or couples with someone at home most of the time.

This energetic working dog needs a job, which includes regular exercise to stay in shape, both physically and mentally. Whether that job is on the land working stock, in service helping humans, competing in sports or as your companion it must know it is needed, handlers must through support, guidance, patience, and love work as a partner, encourage and be steady. What you are as a handler your Koolie will reflect as it follows your lead. When not working, like all dogs it needs to be taken on a daily, long walk or jog. While out on the walk the dog must be made to heel beside or behind the person holding the lead, as in a dog's mind the leader leads the way, and that leader needs to be the human. This breed will not be happy lying around the house all day long. This is a dog for which you will have to schedule in some good exercise sessions daily, or have a job for it to do.

All breeds began from many; the Australian Koolie is no different. History books show that serious importations of working breeds began around the 1800s; many books on the Kelpie, Australian Cattle Dog and Stumpy refer to the influence of the Merle breed in their own breed’s foundations. One such book, by author Angela Sanderson called "Australian Dogs," 1985 out by the Currawong Press refers to the Australian Koolie, then called the German Collie. What is most impressive in her book is her own reference to a much earlier German author Von Stephanitz and his book "The German Shepherd In Word and Picture" released 1925, in which he writes, "The Australian grazier were sufficiently impressed with German sheep dogs to import them.” In his writings he refers to the Tiger spotted dogs of Central and Northern Germany, from Saxony and Brunswick and describes them as Quote: “These dogs had dark brown to black spots or splashes, or larger splashes in a lighter background, or, which was considered more aristocratic, silver grey splashes on a black background”. End of Quote “when presented with a picture of a German Tiger it is not hard to see where our current Koolie originates from. There is mention of Elizabeth Macarthurs’, (wife of John Macarthur who launched the Merino industry in Australia,) transportation of a German sheep herder by the name of Joseph Pabts to her property in Camden, New South Wales in 1825 to care for her flocks; 100 years earlier, Joseph arrived with his family and a number of his German working dogs, believed to be Tigers. This would appear to indicate that Tigers could have been in Australia 11 years earlier than the first officially recorded arrivals of German settlers into S.A. and a century earlier than Von Stephanitz book release. Mr. Kirchner imported several Germans who arrive on the ship the Beulah which docked at the Circular wharf on the 5th of April 1849 to be vinedressers and shepherds. The earlier Tigers would have merged with other bloodlines of that era, then later as they began to arrive the black and tan Collies from Scotland imported by Thomas Hall and the smooth coated merle Collies from England import by Chris Howe of Victoria and the King family of NSW all would have had their influence on the breed, but unlike their cousins the Kelpie and heeler the Australian Koolie still remains very much untouched or collared by standards and remains much the same as it has for over 160 years. More on the Koolie 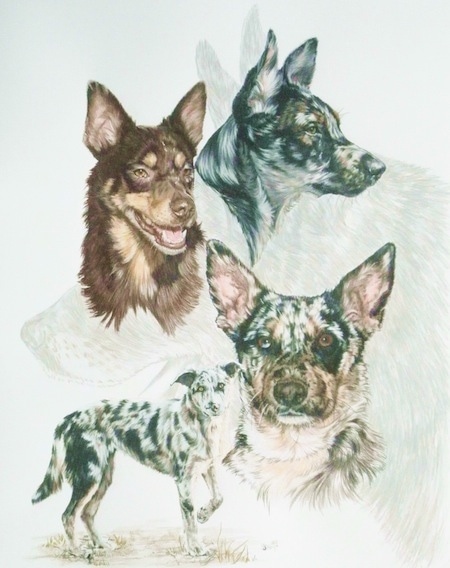 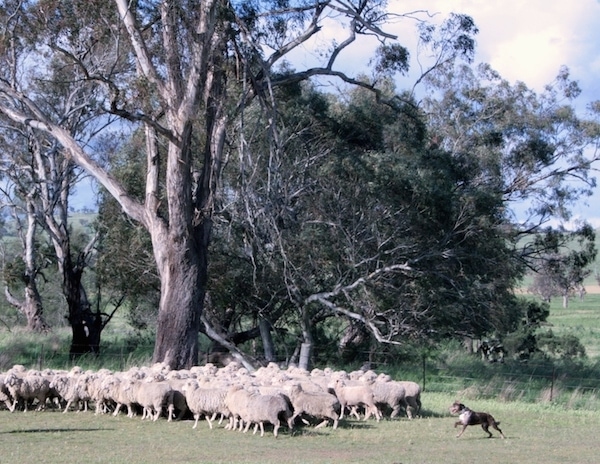 See more examples of the Koolie