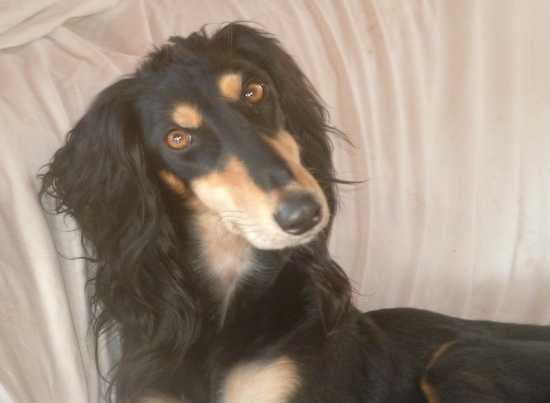 Zeus the black and tan Saluki

The Saluki is a slim, Greyhound-like dog. The head is long and narrow, moderately wide between the ears, tapering gradually toward the nose with a slight stop. The nose is black or liver in color. The teeth meet in a level bite. The large, oval eyes are dark to hazel in color. The long, mobile ears hang down close to the head. The neck is long and the chest is deep and narrow. The front legs are straight. The feet are thickly haired between the toes for protection from rough terrain. The long tail is carried low and is well feathered with hair. The coat is short with long, silky feathering on the ears and tail. A rarer, coarser, smooth variety with no feathering also occurs. Coat colors include white, cream, fawn, golden, red, grizzle and tan, black and tan tricolor or white, black and tan. It has an unusual gait when at top speed: all four legs are in the air at the same time.

The Saluki is gentle, friendly, even-tempered and extremely devoted. It can be somewhat aloof, even with its family. This loyal dog may become attached to one person. Good with children who do not try and roughhouse with it. Sensitive, this breed does not take kindly to harsh discipline. It must be trained with calm, gentle, but firm, consistency. These dogs are fairly submissive by nature to people and dogs and are easily distracted. Be sure you remain the dog's pack leader so the dog feels secure with his surroundings. Dogs want nothing more than to know what is expected of them and the Saluki is no exception. The Saluki does well with other Salukis. They are a pleasant and calm companion and make good watchdogs. Though not aggressive with people, the Saluki's natural instinct is to chase and kill non-canine animals. They may need obedience training to keep their deep-rooted hunting instincts under control, but you can never train the instinct out of the dog. Take great caution around pets such as birds, guinea pigs, hamsters and rabbits. They can get along with family cats if the cat is allowed to assert its dominance over the dog, but may chase strange cats.

The Saluki is prone to some genetic eye diseases and cancer. It can get sunburn

, especially on the nose.

The Saluki is not recommended for apartment life. These dogs are relatively inactive indoors and will do best with acreage. This breed should sleep indoors. They prefer warm temperatures over cold ones.

The Saluki is a natural athlete that needs a lot of exercise, including a daily, long, brisk walk or run. They are happiest when running, however many are lost or killed when they are allowed to get free and they spot a small animal to chase. This very independent dog can never be off its lead except in an isolated, scouted area. These dogs hunt on sight. They will pay no attention to their handler's calls if they are chasing something. In some countries they are not permitted to be left off of their lead at all. Salukis run at top speeds of 40 mph (55km/h) or more with their feet barely touching the ground. These top speeds are reached in short spurts, but they also have exceptional endurance. An excellent way to exercise your Salukis is to let it trot alongside your bike.

This odor-free dog's coat is easy to groom. Just occasionally brush and comb, especially on the longer-haired parts of the dog. The ears should be checked regularly to make sure they are clean. The Saluki is an average shedder.

The Saluki, also called the Gazelle Hound, Arabian Hound, or Persian Greyhound, is native to the area from eastern Turkestan to Turkey. It is believed to be closely related to the Afghan Hound, which is another ancient breed. The Saluki is the royal dog of Egypt, and perhaps one of the oldest domesticated dogs known to man. It was named after the Arabian city "Saluki" in the Middle East, which no longer exists today. Their bodies were often found mummified alongside the bodies of the Pharaohs themselves, and their pictures appear in ancient Egyptian tombs dating from 2100 BC. The Muslims considered them a sacred gift of Allah, and they were never sold but only offered as gifts of friendship or honor. Salukis with a patch of white in the middle of the forehead are thought by Bedouin tribes to have "the kiss of Allah" and are regarded as special. Incredibly fast even over rough terrain, this desert sight hunter was used by the Arabs to hunt gazelle, the fastest of the antelopes, along with fox, jackal and hare. They have also been successful as racing dogs. The Saluki was recognized by the AKC in 1929. 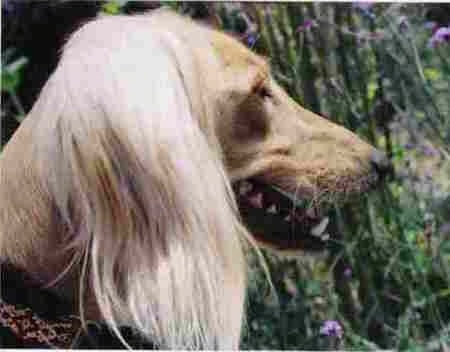 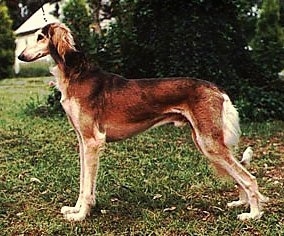 This is Am. Can. & Aust. Ch Afking-Baghdad's Charaz Raja. Photo courtesy of The Baghdad Home Page 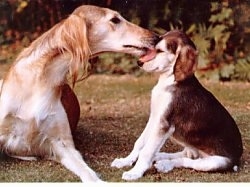 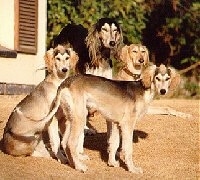 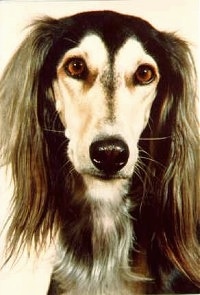 See more examples of the Saluki