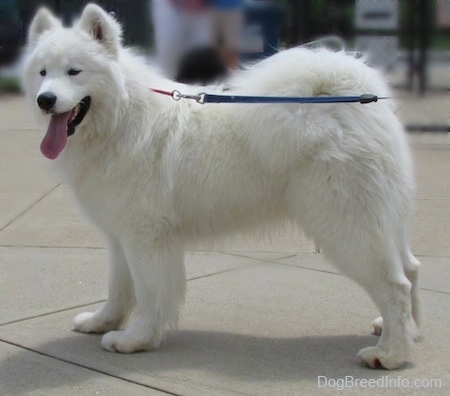 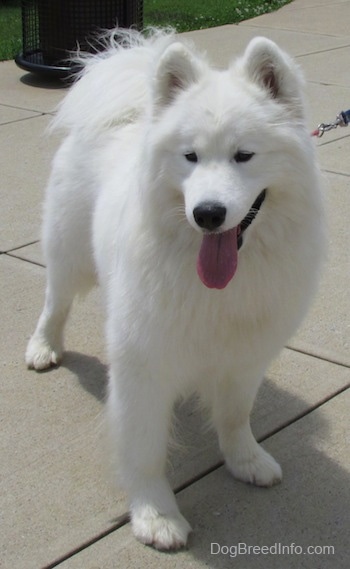 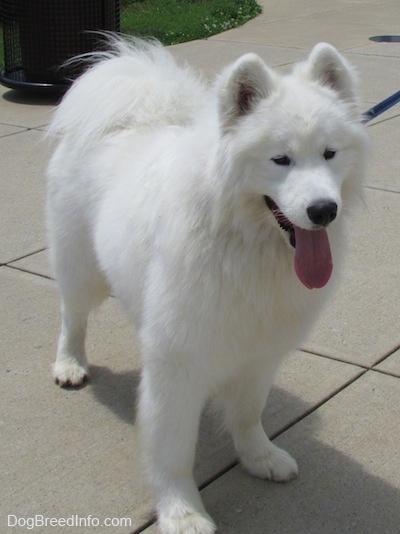 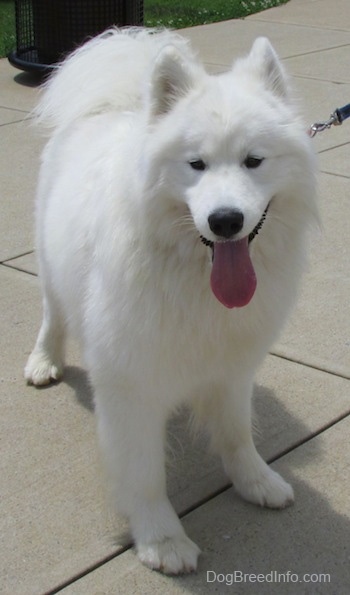 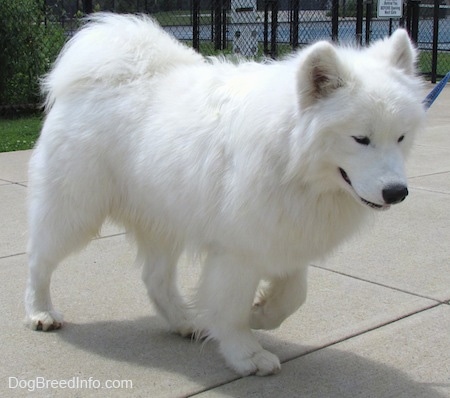 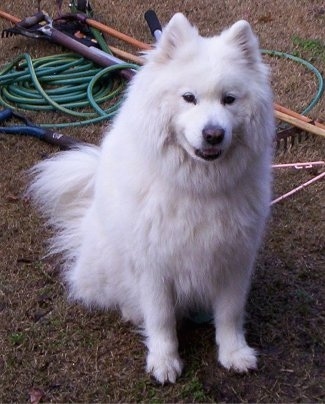 Introducing, all the way from Australia, Amy! From Amy's owner—"This is my gorgeous 7-year-old Samoyed Amy! She is an Annecy Samoyed (an English breed); that's why she has a cute, short nose! She has a habit of talking back when you tell her off for being naughty, but how can you say no to that face?! She is everything a Samoyed should be: happy, mischievous, friendly, kind, great with children of all ages, loves to bark, absolutely gorgeous, gentle, would never hurt a fly, playful, loves creatures of all kinds, very smart, wonderful with strangers and if left alone for too long, she seems to find things to destroy, like the back fence! She is also wonderful with my 7-month-old kitten Jamane. They're always playing and Amy protects him like she was his son." 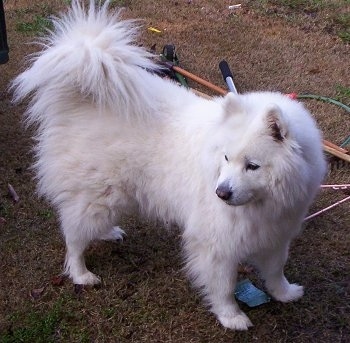 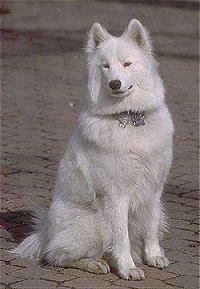 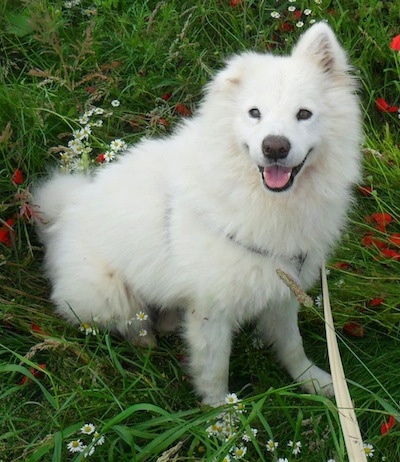 "We are writing to express how grateful we are for your website and the "Understanding Dog Behavior" articles! We are Anna and Danny from the Netherlands. Two and a half months ago we rescued Boody, an approximately 5-year-old Samoyed from Spain through a charitable Dutch organization. They were trying hard to save as many dogs from those terrible killing stations in Spain. When our guy came to us, he was 18 kg (40 pounds), deaf, and with loads of health problems. After treating his ear infection he was not so deaf anymore, only when it was handy for him. :) Week by week he started developing bad behaviors, like aggressively barking at random people outside. Then skateboards, cars, bicycles, etc. We visited a dog behaviorist as we were getting worried that one day Boody would attack and hurt somebody. We were told that Boody is not an aggressive dog, just fearful. We were given some advice; some things helped us, others didn't. Later I understood why.

"Three weeks ago Boody's left front and back paws were operated on and as a result we were unable to walk him and give him enough exercise. It was at this point we noticed his behavior escalated even more. He started barking at people that he knew and used to be friendly with. That is when I luckily came across your website with precious articles! Thank you SOOO much as you helped us to understand much better, if not fully, what exactly is going on with our guy! It's a shame we did everything wrong from the very beginning (also in the past with my previous two dogs. I treated them as humans!), but as you said, it's never too late to change. Already after the first couple of days of establishing to him that we are leaders, we received impressive results! The simple things such as going through the doorways first, heeling on the leash and staying calm have already produced miracles in his behavior! We still have a lot to work on, which is to be expected, as we also have to change and learn a lot. But you cannot imagine how proud we feel when I or Danny walk him on a pack walk. For now we do it approximately 20-30 minutes at a time, as his wounds haven't healed fully yet. Boody does not react to the cars, bicycles or people walking toward us!!!

"Boody used to act a bit jealous toward Danny's daughter, but now, after teaching her to give him food and commands and to stay strict with him, he does listen to her and seems to accept her as a pack leader! Boody is never left alone with her. She's the one who always gives him food when she's here. It's amazing to see how a dog is changing and accepting authority of a 3.5-year-old girl!

"I would never have thought that setting rules for a dog has actually nothing to do with being cruel, but makes the dog and its owners much more balanced and happier! People need to see that things can be changed. Maybe not all at once, but it is possible. And being as super-soft with animals as I was, now I can definitely say that people can also change and become better leaders. We feel fully responsible for Boody and for what he does as we are now guiding him. From all of us, including Boody, thank you so much!!!" 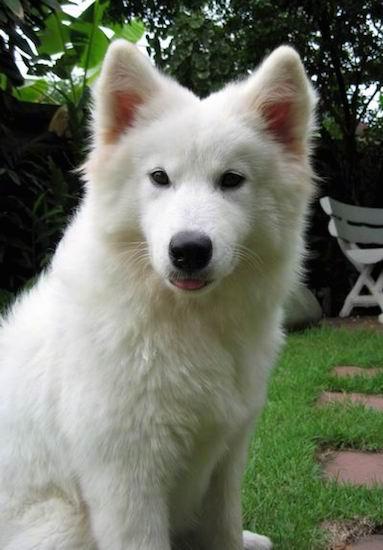 "This is Bianca at 6 months old. She was born and raised in Bangkok, Thailand. She adapts well to tropical climates. I keep 60% of her time in an air-conditioned room, and 40% outside playing in the morning and evening." 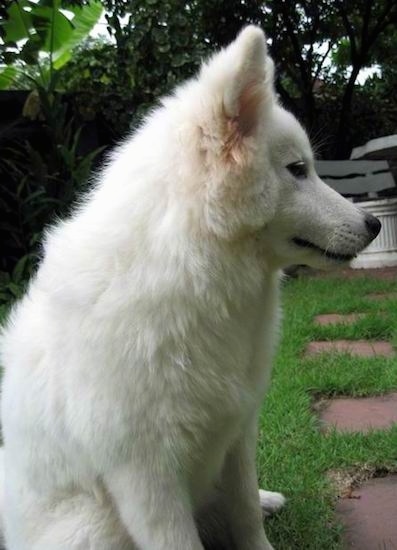 Bianca the Samoyed at 6 months old 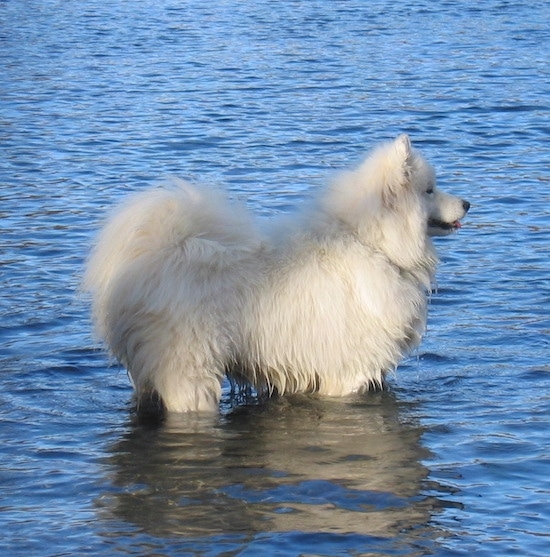 Holly the Samoyed at 3 years old—"She loves walking and jumping in anywhere she finds water!" 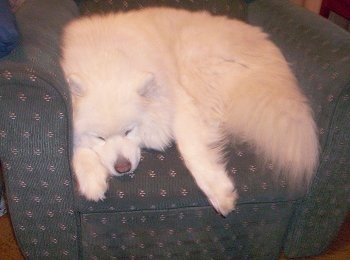 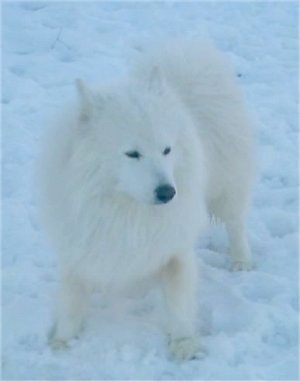 Zeus the adult Samoyed in the snow 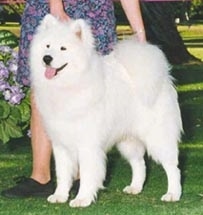 This is Silver Fox Mountain Kodiak, bred by Judie Lucas, Silver Fox Samoyeds and owned by Brad and Sharon Fuller and Judie Lucas. 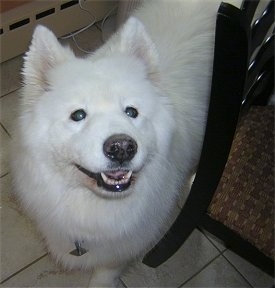 Jasmine the Samoyed doesn't bark that often...but howls a lot. 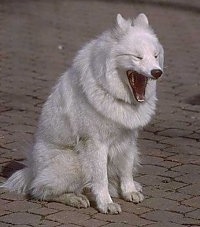 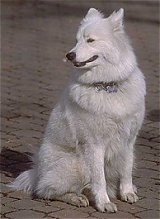 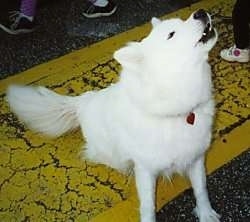 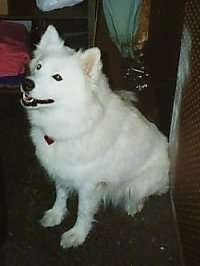 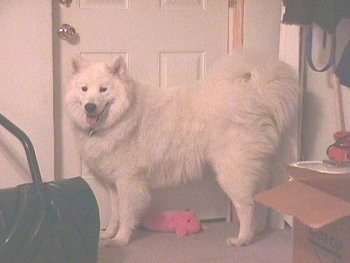 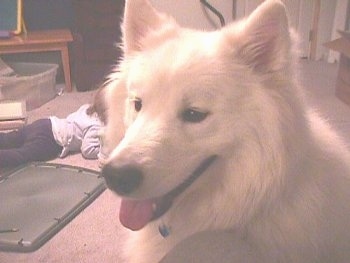 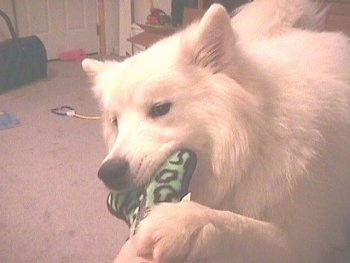 2-year-old Zach chewing on his toy