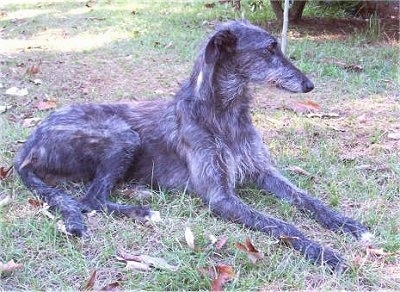 The Scottish Deerhound is tall and slim, appearing to be a rough-coated Greyhound, but larger and bigger boned. The head is flat and broad between the ears, with a muzzle that tapers to a point at the nose. The nose is black and sometimes blue on blue-fawn dogs. The teeth meet in a level bite. The eyes are dark, either brown or hazel, with black eye rims. The ears are high set, folded back like a Greyhound. When the dog gets excited the ears are half-perked. The chest is deep, not broad but not too narrow. The front legs are straight. The tail is long, carried low, almost touching the ground. The wiry coat is 3-4 inches (7-10 cm), and longer and harsher on the body, neck, beard, mustache and mane, and is shorter and softer on the head, chest and belly. Coat colors include shades of blue gray, gray, brindle and black, yellow and sandy red or red fawn, sometimes with black ears and muzzle. There is sometimes a little white on the chest, feet and tail.

The Scottish Deerhound is a gentle, well-mannered dog. It is polite and affectionate. Loving, friendly and excellent with children. Very courageous and dignified, devoted and loyal, but it is not a watch or guard dog, for it just loves everyone. These dogs need a firm, consistent, confident pack leader who knows how to display calm, but stern authority over the dog or they will be willful at times and slow to obey commands. Although friendly with other dogs, they should not be trusted with non-canine pets. Scottish Deerhounds are quiet and rarely ever bark.

Scottish Deerhounds are prone to bloat. It is wise to feed them 2 or 3 small meals a day rather than one big one. Avoid vigorous exercise right after the dog has eaten a big meal.

Scottish Deerhounds can do okay in an in apartment if they are sufficiently exercised. They are relatively inactive indoors. If they are taken for walks they can live without a yard, but they do best with a large, fenced yard.

This is a very active breed that needs to be taken on a daily, long walk or jog, making an excellent jogging companion. Always keep in mind that they have an instinct to chase. Do not let them off lead in an unsafe area.

An average of under 10 years.

The harsh, wiry coat needs extensive grooming. Some trimming and stripping is required, but little skill is needed. This breed is an average shedder.

Closely related to the Greyhound, the Scottish Deerhound was once known as the Scotch Greyhound, Rough Greyhound and Highland Deerhound. In Scotland it became a district breed in the 16th and 17th centuries and was given the name Scottish Deerhound, and the rough coat was bred in to adapt to the rough climate. They were used as deer hunting dogs for Scottish tribes in the Middle Ages. They became known as the royal dog of Scotland and no one ranking below earl was permitted to own one. Queen Victoria and Sir Walter Scott owned Scottish Deerhounds. With their strict ownership rules the dogs were not very populous in number and took an even harder hit almost to extinction when man invented the gun and the dogs were no longer needed to bring down deer. Two brothers by the name of Archibald and Duncan McNeill saved the breed in the 1800s when they started a breeding program. Once again in Britain during World War II, like many breeds, the dogs fell very low in numbers. It was very difficult to feed the large dogs, and many people destroyed them for food. Along with their great sight, the Scottish Deerhound also has a very fine sense of smell. Some of the Deerhound’s talents include: hunting, sighting, tracking, racing, agility and lure coursing. 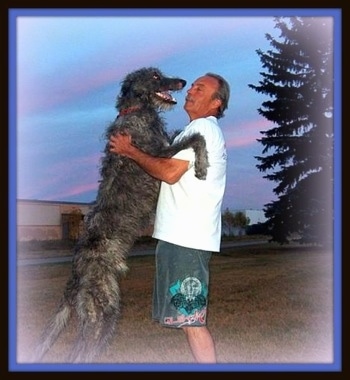 Zippo the Scottish Deerhound demonstrating how tall he is 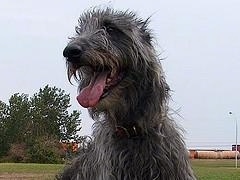 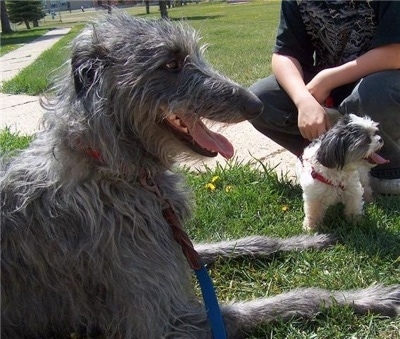 Zippo the Scottish Deerhound with his little friend 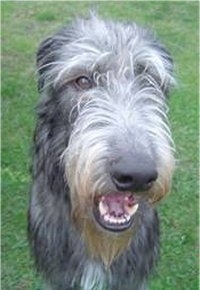 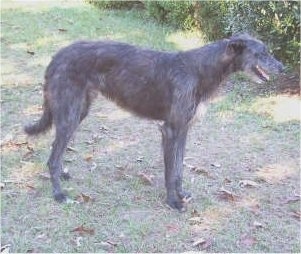 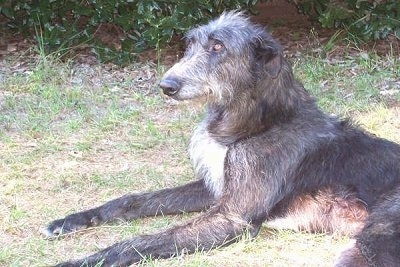 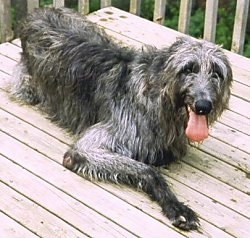 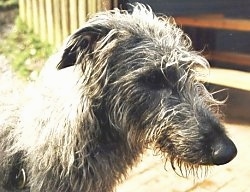 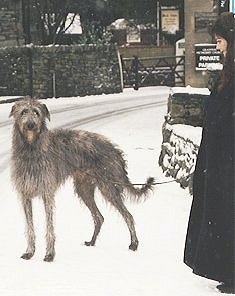 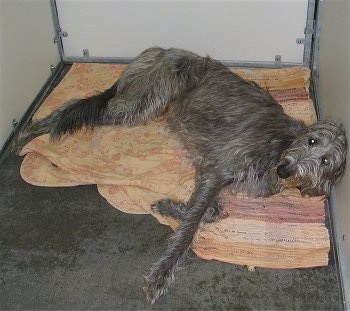