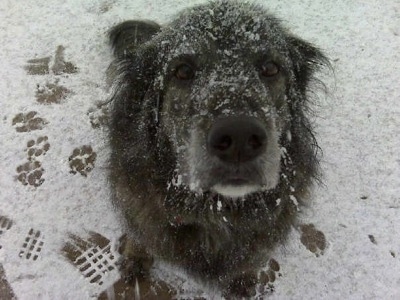 "I was browsing your site and saw some of the horror stories from the SPCA, and then I saw one from a local shelter in Denver called Maxfund. Maxfund gets a lot of positive press, because they are a 'no kill' shelter. I think it is misplaced. Here is my story:

"My husband and I had a 10-year-old Lab, Jazz that died of cancer. We were not planning to adopt another dog immediately after Jazz died, but Hank, our second dog, had other ideas. He became very anxious and would yelp and shake uncontrollably every time we would leave the house. So, we decided to get another dog in part to keep Hank company, but also a great excuse, because I really wanted another dog. Hank was getting tired of me smothering him after Jazz's death.

"After quite a bit of searching for another Lab, we came across a dog at the Denver Municipal Animal Shelter by the name of Farley. Farley was a ball-crazy, completely undisciplined Lab mix who had been taken from the original owner due to severe neglect and had been in the shelter for over 8 weeks. We visited him once, went home to think about the responsibility of adopting a completely INSANE dog, and went back the next day to adopt him. Unfortunately, Farley was gone, and we were told that he was transferred to the Denver Dumb Friends League. They are an excellent organization, and we had adopted our previous two dogs from there.

"We drove over to DDFL, only to be told that they did not receive a Lab mix from that shelter. We called the municipal shelter, and they confirmed that he had, indeed, been transferred to DDFL. I eventually got to the director of DDFL. They searched again and told me that they were very sorry, but they did not have the dog. So, we drove back to the municipal shelter and spoke to another person. THIS person took the trouble to look at the file, and then stated that the dog had actually been transferred to Maxfund. I'm a little irritated at the municipal shelter. But, since they deal with so many dogs and are an underfunded, government-run organization, I wasn't surprised.

"The next day, we went down to Maxfund and filled out all the paperwork, answered the questionnaire, etc. We went through the kennels, which were smelly and dirty. I was surprised, since DDFL always takes great care of their dogs and kennels, and every intake gets groomed. Although Maxfund seemed to have such a great reputation, they couldn't be bothered to clean up the dogs they took in, even though they could be there for a very long time.

"At any rate, after about an hour, we were able to take Farley for a walk with our other dog, so that we could make sure they got along. Everything was fine, and we were very excited about the new addition to our family. We came back to the shelter to finalize arrangements only to be told that we did not qualify! They initially did not give a reason, but I am a persistent person, and I eventually got them to admit that it was because we would keep the dog outside during the work day, because we are gone for 9+ hours. I explained that, although the dogs are let outside, we have a doggie door into our garage with beds and water inside. The garage never gets below freezing (and I only adopt dogs that can handle cold weather), and on the rare occasions (once per year) where it dips below zero outside, I make arrangements to keep the dogs inside during the day.

"This was not good enough. Dogs have to be inside all day and all night. When I pressed for a reason, they said, ’Because dogs are stolen out of yards.’ I know this can happen, sometimes. But we have a 6-ft privacy fence with a lock on the gate at the end of a cul-de-sac. I have never heard of a dog being taken out of our neighborhood.

"I left, very upset, and told a friend of mine what had happened. It turns out that she was a major donor to Maxfund. She wrote them a letter expressing her concern and letting them know that she had spent time watching our dogs, and we have a perfect setup and would be a great home. This also was not good enough for Maxfund. They told her that they would not change their decision.

"So much for Farley. I hope he found a good home and that it didn't take too long.

"I had always been a bit irritated at Maxfund because of their constant crowing about being a 'no kill' shelter. Well, the reason they can do that is because they can turn dogs away when they are full. Other shelters don't have that luxury. Now I have first-hand experience that shows how their small-minded and judgmental attitude extends beyond their view of kill shelters to their adoption policy. 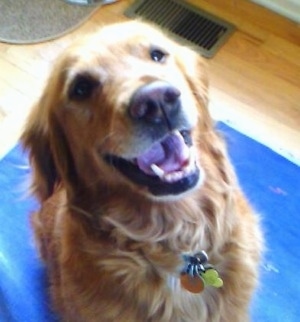 "My friend withdrew her support from Maxfund and dedicated her time and money to a different organization, Golden Retriever Freedom Rescue, where we happened to adopt a beautiful Golden who had been rescued from a life as a breeder in a puppy mill. Sadie came to us skinny as a rail (even after a month in a foster home fattening her up), nervous of all people, afraid of the leash, and with no prey drive. We took her on a walk her first day home before we even brought her in the house. A rabbit ran across the path 2 feet in front of her, and she just looked at it! Over time, she came to love all people and realized that small animals are good for chasing, if only she weren't prevented from doing so by that pesky leash! 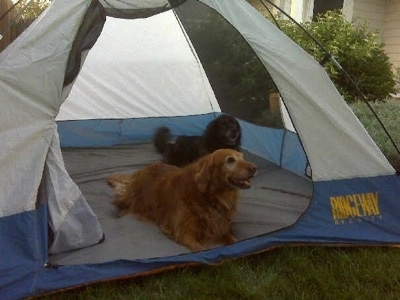 "Sadie is the Golden. Hank is…nobody knows what mixture of breeds he is. He is most similar in carriage to a Flat-Coated Retriever, but he must have some Australian Cattle Dog, plus about 10 other varieties thrown in for good measure.

"Sadie passed a couple weeks ago. We miss her, but we are content knowing that the last few years of her life were better than anything she had ever experienced. I am amazed at the changes in her personality once she was in a secure environment and had another dog to show her how she should act." 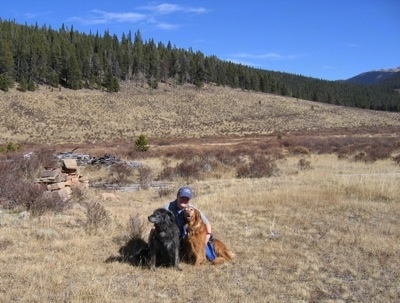 "Now, Hank is more secure and doesn't freak out when we leave. We've decided to foster for a rescue, and if a great fit comes along, we'll adopt. Hank will have to get used to not being the center of attention."