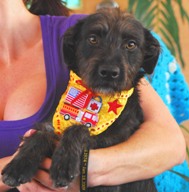 "I tried to adopt Zack, the terrier depicted here, from the Nevada SPCA in Las Vegas, also known as Dewey Animal Shelter, on August 18, 2009. I did not even get as far as an application. The worker who allowed me to play with the dog outside its kennel and to take it outside to a fenced yard area, told me that I was not qualified to adopt the dog. Why? Because when she asked me if I had experience with terriers, I truthfully said that I did not. She said that since I had no "breed experience" I could not adopt Zach. I said that I was willing to do whatever it would take to become acceptable as an adoptive parent for this dog, including taking classes and volunteering at the shelter. This same woman said I would have to take a class FIRST before I could qualify to adopt, which would include "community service" that could be performed at the shelter. I asked where I might take such a class and was given a vague "community college" answer. (That night, I went online to search for the classes. I discovered there was canine good citizen training at a local school, but of course that requires the owner to attend the class with their dog. There were no classes I could take without having a dog with me.) The worker then asserted that "terriers are called terrors for a reason," (huh?), that the dog was uncontrollable, would destroy everything I owned, was a digger and had intolerable separation anxiety. I had seen none of these traits in the pup (9 months old) during the hour or so that I spent with him. In fact, what I liked about the dog was that even in his eagerness to explore the yard while unleashed, he came to me each time I called him, and sat for me when I asked him while gently pressing his rump. He was lively and energetic, drank water from my hand, clearly needed training, but was small enough for me to handle easily. The worker said Zach could not be left alone for a second because of the separation anxiety; he would have to be kept company 24/7. I had a month off from my regular job and was planning to spend a lot of time at home working on a freelance project, so I said I wouldn't mind. I figured if I found it difficult to train Zach myself, I would take him to a professional and we could learn at the same time. It was all to no avail, though. And besides, I was concerned about not being able to leave him alone for even a couple of hours. That seemed like a lot to take on, so I let the issue drop. I have regretted that almost every day since.

I wish I had discovered your website before I went to Nevada SPCA. If I had, I would have told them anything they wanted to hear, including that I had breed experience just to get the dog, knowing I had time to train him and that with proper training and an understanding of his position in the pack, his separation anxiety could be cured.... They made it sound like separation anxiety was a lifelong trait that could not be assuaged. I am very confident in my ability to handle a medium-sized dog. (In fact, I was the only one in my family who was at all assertive with a Pit Bull my cousin adopted. That dog was treated like a human by everyone but me. He understood by my firm no when he tried to jump on me in greeting that this behavior with me was unacceptable. He jumped on everyone else except me. He begged for food (successfully) from everyone except me. I just established dominance by instinct because I didn't want the dog jumping on me and I didn't think it was right for him to beg for food or really to eat from the table when he had his own food available in his dish.) I guess in a way I do have breed experience with a terrier, because a Pit Bull is one. But I didn't spend a whole lot of time with my cousin's dog (whom she ultimately gave away because he was "too much work.").

"I think about Zach all the time. I really liked him and I have not found a pound puppy I like as much as him. I saw a nice Pit Bull puppy at another shelter (nonprofit foundation) but the dog was too submissive—it seemed like she had been mistreated. When I called her to me in the pen she would run over but would then put her head down on the ground and cower. I think that would be much harder to modify than willful behavior. Also, she will grow to be too large for my apartment. Zach was the perfect size. I miss him. Look at that face!

"Zach was at the Nevada SPCA for two weeks before I met him, according to the worker. Two days after they denied my request to adopt, his picture disappeared from their website. I can only hope this delightful little guy was adopted. Maybe one of the workers wanted him for herself and that's why they denied me??

"Oh, and by the way, after being denied Zach I asked the worker to show me a dog or dogs that the shelter would permit me to adopt. She showed me a 12-year-old Yorkie that was clearly in need of medical attention, even though I had said I wanted a dog that was robust enough to accompany me on daily 2 mile walks.... She said that was the ONLY dog they would consider me qualified to adopt.