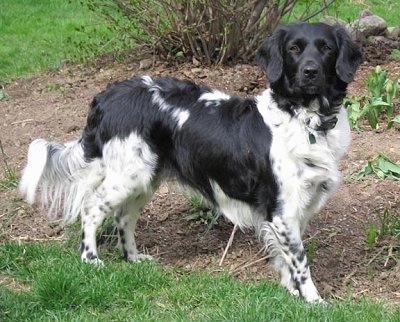 The Stabyhoun is a simply sturdily built long-coated pointer that is greater in length than height, which should be neither too coarse nor too refined in build. The skin fits the body closely: there is no dewlap nor does it show too much lip. The appearance of the Stabyhoun has some very typical characteristics, of which the sleek coat is one. The hair on the ears is long at the top and decreasingly shorter up to the last 1/3 of the ear, where the hair is short. The shape of the ear is the form of a mason's trowel. The hair on the legs and tail is also typical. On the back of both the front and hind legs, the hair is bushy, as it is on the tail. It should never be feathering. The dog has a rather wide brisket and fairly big, well-developed feet. Remember, it has to be able to walk, swim and climb for long periods at a time! The expression of the face should always be gentle and intelligent. Acceptable colors are black, brown and orange with white markings. Spotting and/or roan in the white are acceptable. Tricolor is objectionable.

Devoted, soft and gentle as a pet, very intelligent, obedient, the Stabyhoun is a good guard dog, not vicious or snappy. It is highly trainable, but needs consistency. The Stabyhoun has a nice temperament, is friendly, tolerant and willing to please. A characteristic of the Stabyhoun is its great tolerance toward children. Animals that belong to the household are treated in a friendly way. This dog has a laid-back temperament and it loves to play with children. It makes a good watchdogs. It is very affectionate and many of these dogs love to "cuddle." Many Dutch owners use its natural retrieving abilities for playing with balls, because it will go into the water and find the balls and then bring them back. This dog is a wonderful pet to have around the house and is just perfect for life in Holland with its many waterways and parks. While it makes a good watchdog, it is friendly and amiable. It is also a very powerful dog and larger ones can pull sleds in the winter. By its nature, the Stabyhoun is an obedient, peaceful, kind and patient dog that is deeply fond of its family, and it likes to please its owner. Social and quiet, friendly. Socialize well to prevent your Stabyhoun from becoming reserved with strangers. The Stabyhoun is utmost a wonderful family and companion dog. This breed likes to have a job to do, because of its great intelligence, speed, flexibility and eagerness to please, it is ideally suited as an agility dog (one owner prefers her Stabyhoun over her Champion Agility Sheltie!); they do Flyball, they love to retrieve tennis balls, they show off at obedience class, etc. These dogs are keen and active dogs outside, but calm dogs inside of the house, as long as they get a moderate amount of daily exercise. The origin of the breed is in hunting, and while they are still used for that purpose, they are nowadays foremost used as family companions. Those who have hunted with the breed have stated, "The Stabyhoun can be taken out in the field for hours. It will wait steadily and calmly for the shot. The Stabyhoun is both a soft-mouthed retriever and a pointer that is particularly useful for hunting ducks. It is a fine retriever, and water work is one of its strongest sides. It marks well and is easily controlled over greater distances and is an eager searcher. It brings in any game alive and undamaged. When catching moles and other vermin these animals are killed through breaking the neck, but the furs remain undamaged. It is an excellent swimmer that can handle cold water and loves to please its owner." Today the Stabyhoun is ultimately a wonderful companion and family dog, but it also enjoys a moderate, though very devoted fancy among Dutch sportsmen. Its numbers are increasing slowly but steadily. Since the dog used to be owned by farmers who were generally poor, it was very welcome to have such an all-rounder, because often only one dog could be afforded. The dog had to be tolerant toward the other livestock on the farm, friendly with the children and protective about the premises, without being vicious or snappy. Be sure you are this dog's firm, confident, consistent pack leader to prevent it from becoming stubborn and willful.

The Stabyhoun is a healthy dog. In the past the breed had some problems, but careful breeding expelled most problems. The Dutch have been trying to breed out hip dysphasia for many years and no one in that club is allowed to breed their dog if it has any signs of hip problems.

This breed will do best with a medium or large yard. These dogs are calm indoors if sufficiently exercised. They will do well in cold climates as long as they have adequate shelter.

This breed needs a fair level of exercise and loves to play with children. The dogs are used in almost all imaginable forms of training. Agility, obedience, hunting, triathlon, endurance, Frisbee: a healthy Stabyhoun has no physical problems with these activities. These dogs should be walked daily and have a large, fenced-in yard they can play in.

The population of the Stabyhoun today is about 3500 animals. Therefore, careful breeding is important. The average life expectancy is 13-14 years.

The coat is long and sleek and has a natural, fresh smell. The dog doesn't need much grooming. It usually keeps its body very clean. The Stabyhoun does not need any special care apart from proper brushing. All you have to do is keep tangles out. These dogs molt (shed) usually twice a year, and thorough brushing helps the dog to finish its molt in about two weeks. Washing should be avoided when possible, because it affects the natural sleekness of the coat. The coat by its nature will lose dirt very quickly. After a swim the dog is usually quite clean and dry in a couple of hours.

The name: the Stabyhoun originates from Friesland, a province in the north of the Netherlands (which probably is a descendant of Spaniels brought to the Netherlands by the Spanish conquistadors). The first part of the name is probably from the Dutch: sta me bij (stand by me). The last part is simply Friesian, meaning dog. It is pronounced "hoon." The Stabyhoun is a gundog of which descriptions were already found as early as 1800. In earlier days it was used for small game and bird. It turned out to be a fine mole catcher, which also during the hunting season was used as an all-round gundog. It was a fine pointer, an excellent tracker and also a good watchdog. It was also used as a draught dog. Its looks have not changed a lot today, although in earlier days the breed was often mixed with another Friesian breed, the Wetterhoun, because only working capacities were counted. In 1942 the breed was officially acknowledged and since then crossbreeding between the two has stopped. 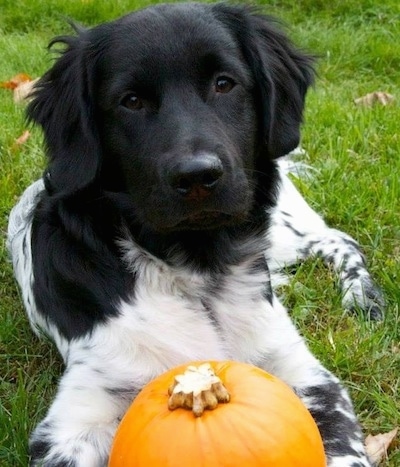 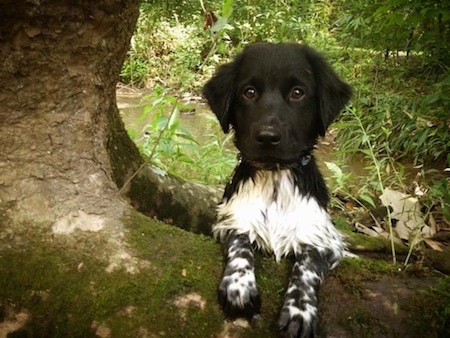 Gander the black and white colored Stabyhoun puppy at 14 weeks old—"He is such a swamp hound!" 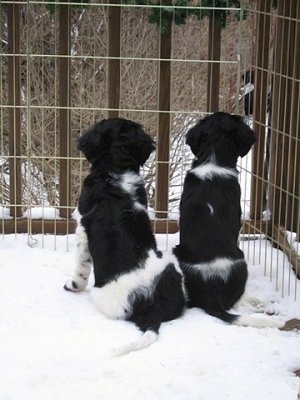 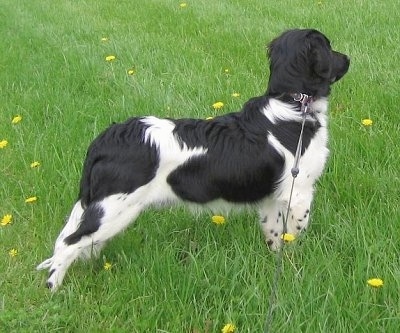 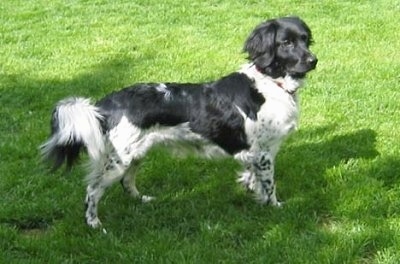 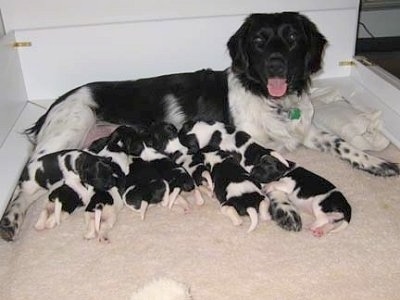 Wietske with her 9-day-old litter of puppies, photo courtesy of Marilene Luxton-Jones 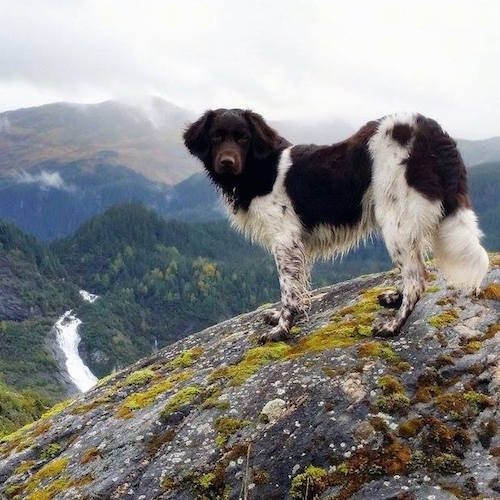 Mirakel aka Mara the brown and white Stabyhoun at 1 year old—"Mirakel (Mara) is a brown and white Stabyhoun. She is a very loyal and loving family companion. She pretty much does anything we ask of her; everything from racing up a ladder, to zooming down a slide with the kids, or sitting in my lap and swinging. Out on a walk, she happily greets new people and dogs with a tail wag. Meanwhile at home, she is cautious and reserved with strangers until she sees her human family greet the newcomers at which point she too will greet them eagerly. She is limber and agile, and has an incredible ability to scale smooth rocks as if she is half mountain goat! She makes a great hiking partner and at home no one cuddles as good as her. Her favorite activity is retrieving, especially from water. What a fun, lovely medium-small dog. We couldn't ask for a better dog!" 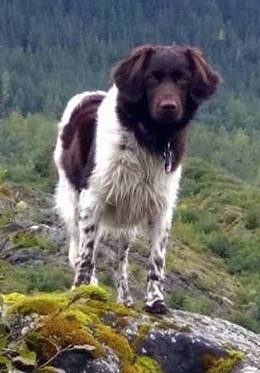 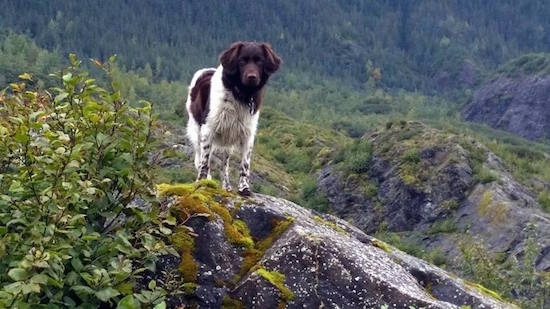 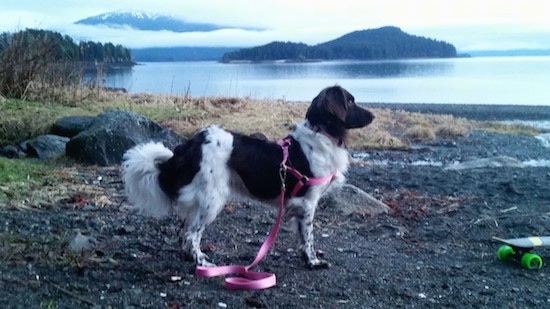 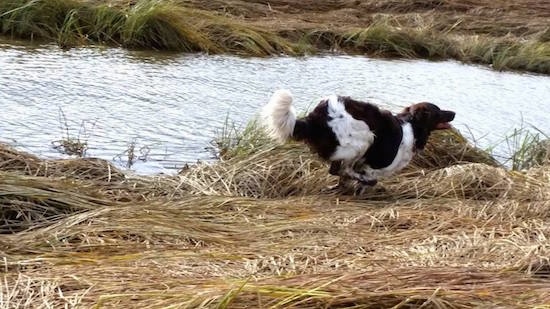 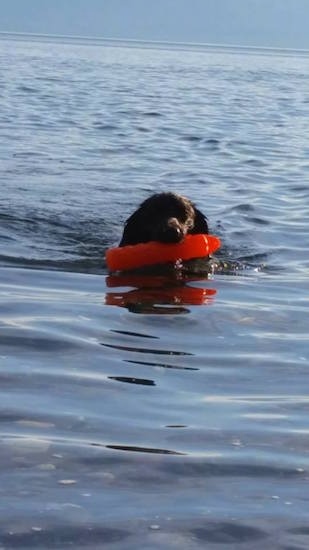 See more examples of the Stabyhoun