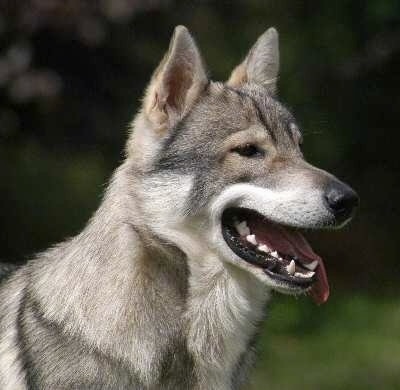 The Tamaskan Dog is a large working dog and as such has an athletic look to it. Similar in size to its cousin the German Shepherd, the Tamaskan has a wolf-like appearance with a thick coat and straight, bushy tail. It comes in three main colors of red-gray, wolf-gray and black-gray. Eyes are yellow through amber and brown, although light eyes are very rare.

The Tamaskan is a good family dog, being gentle with children and accepting of other dogs. His high intelligence makes him an excellent working dog and the Tamaskan has been known to exceed in agility and obedience as well as sled racing. This pack dog prefers not to be left alone for long periods of time. It is better suited to other human or canine company. Be sure you are this dog's pack leader, providing plenty of daily mental and physical exercise to avoid separation anxiety. The objective in training this dog is to achieve pack leader status. It is a natural instinct for a dog to have an order in its pack. When we humans live with dogs, we become their pack. The entire pack cooperates under a single leader. Lines are clearly defined. You and all other humans MUST be higher up in the order than the dog. That is the only way your relationship can be a success.

Epilepsy was diagnosed in 3 dogs, but with careful breeding, the lines that carried this are not allowed to breed. Also there have been several dogs that have been found as carriers of Degenerative Myelopathy (DM), so now they DNA test all breeding dogs for DM to prevent any sufferers of the genetic disease. Their Husky and German Shepherd ancestors both suffered with hip dysplasia and to guard from this the Tamaskan Register insist that all breeding stock be scored before mating and they have so far kept a good breed average of 8.1.

Tamaskan Dogs are not recommended for apartment life; if left alone for long periods they may become destructive or attempt to escape. They should have a large garden or at least be allowed free running every day.

The Tamaskan Dog is very active and needs a great deal of exercise, which includes a daily, long, brisk walk or jog. They can be let off the lead and will return if trained. They need free running and also mind exercises as they are very intelligent. Most Tamaskan Dogs are easily trained but often stubborn. They can be worked in Agility, Obedience, Musical Freestyle and Pulling.

The Tamaskan Dog needs little grooming; perhaps a good brush once a week and more during times of moulting.

The Tamaskan Dog originates from Finland. Husky type dogs were imported from the USA in the early 1980s. These were mixed with other dogs including Siberian Husky, Alaskan Malamute and a small amount of German Shepherd. The aim was to create a breed of dog that looked like a wolf and had high intelligence and a good working ability. More recently, in order to improve bloodlines, other dogs of Husky type origins were integrated into the breeding program. Now the gene pool has been extended, Tamaskan breeders can carry on mating only Tamaskan to Tamaskan and so creating a whole new breed of dog. Interest in the Tamaskan Dog has been slowly increasing and there are now Tamaskan Dogs in the U.K., USA and across Europe, largely due to the efforts of The Tamaskan Register, the official registering body.