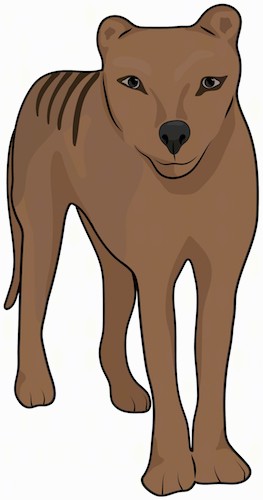 The Thylacine was known to be the most recent largest marsupial carnivore. It was not related to the dog, with its closest living relative being the Tasmanian Devil. They were a dark to medium brown color with about 15 darker brown stripes or bars of color on their backs. They had rounded ears that stuck above their heads, a large rounded skull and an extremely long muzzle. Their jaws were long and could open to almost 90 degrees, revealing sharp teeth.

There are no records of the temperment of the Thylacine. The only evidence we know is that they were wild and were known to kill large prey such as sheep for food.

There are no records of this breeds health issues.

The Thylacine was wild and not domesticated. They lived in the wilderness and hunted large prey.

Since they lived outside in their own packs, they probably exercised a rigorous amount while hunting, migrating, and traveling throughout the wilderness.

There are no records of the life expectancy of the Thylacine.

There are no records of the litter size.

They had a short coat and groomed themselves when necessary.

These animals were originally found in Australia, Tasmania, and New Guinea. Because of the large amounts of Dingos living on the mainland of Australia, they were eventually confined to Tasmania where they were hunted by the people because of their threat of killing the domestic sheep on the land. By 1914 the Thylacine was considered rare and by 1936 the last captured Thylacine died in the Hobart Zoo. A few years later they were reported to be extinct because of their disappearance from the wild.

However, there are possibilities of cloning this animal due to the fact that scientists have their full DNA from the fossils from long ago. With technological advances happening more and more, scientists have considered taking the DNA from the Thylacine and placing it into a donor egg from a related species. Currently, there are no cloning plans put in place regarding the Thylacine.

To this day, there are still many Australians who believe that the Thylacine is still alive and hiding in the woods. There are currently teams who have placed video cameras in places where they would most likely show up. There are frequent claimed sightings of the Thylacine although none have been clear enough to confirm. 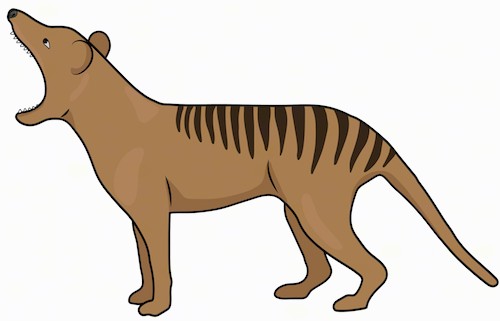