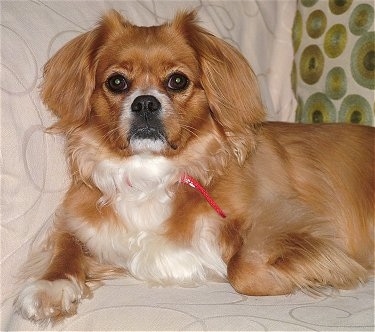 The Tibetan Spaniel is often mistaken for the Pekingese, the differences being that the Tibetan Spaniel has a less profuse coat, slightly longer face and does not have the extra skin around the eyes. The body is somewhat longer than tall. The slightly domed head is small in proportion to the body. The blunt muzzle is medium length without any wrinkles, and with a slight, but defined stop. The nose is black. The dark brown eyes are set well apart, oval in shape and medium in size. Teeth should meet in an undershot or level bite. The front legs are slightly bowed and the feet are hare-like. Dewclaws are sometimes removed. The well-feathered tail is set high and carried over the back. The Silky double-coat lies flat, is short and smooth on the face and front of the legs and medium length on the body. The neck is covered in a mane of hair which is more prominent in males. There is feathering between the toes that often hangs out over the feet. The coat comes in all colors, solid, multi-colored or shaded, including fawn, red, gold, cream, white, black and black and tan, often with white markings on the feet.

The Tibetan Spaniel is cheerful, happy, charming, very clever and trusting. This breed is a fine family companion, very independent and a good watchdog. It is not yappy, yet will bark at intruders and odd noises. It can move fairly quickly. This breed gets along with dogs and other animals. Tibetan Spaniels can be slightly difficult to train. If you allow this dog to be pack leader over humans, he can become overprotective, may not be trustworthy with children and reserved with strangers. He may become stubborn and sometimes dog aggressive. These are not Tibetan Spaniel traits, but what is known as Small Dog Syndrome, human induced behaviors, where the dog believes it is the boss of the home. As soon as the humans take the control away from the dog, the behaviors will subside.

Prone to respiratory problems and heatstroke.

The Tibetan Spaniel is good for apartment life. It is relatively inactive indoors and will do okay without a yard.

The Tibetan Spaniel requires moderate exercise, which includes a daily, nice long walk. It will also enjoy a romp in the yard.

Average of 3 to 6 puppies. Unlike most other breeds, the Tibetan Spaniel dam tends to only go into heat once a year.

Comb and brush the coat regularly. While this breed is an average shedder all year round, the coat comes out in clumps once a year.

This breed originated in Tibet. It is descended from dogs from China and other Buddhist countries. The Tibetan Spaniel is considered an ancient breed, being that there is evidence of its existence over 2000 years ago. Most small Asian dogs are believed to be descended from the Tibbie. Highly esteemed in ancient Tibet, they were often given as gifts to royal houses and the dogs were spread throughout Asia. Depictions of the dogs were found on early Eastern art dating back as far as 1100 BC. The dogs worked turning the prayer wheel for their masters and also as watchdogs in Tibetan monasteries. They would sit up on the high walls and bark at anything they believed didn't belong. The breed was first introduced to England in the late 1800s. It was recognized by the AKC in 1983. 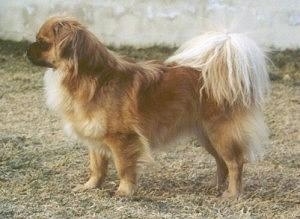 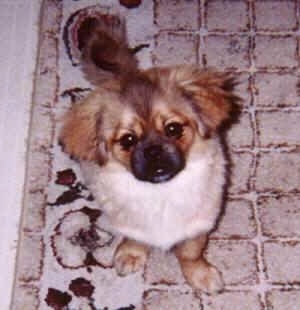 Teddy as a puppy, photo courtesy of Tibbies-R-Us 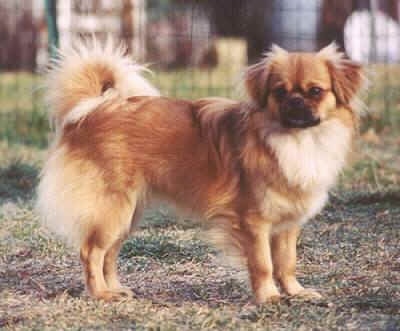 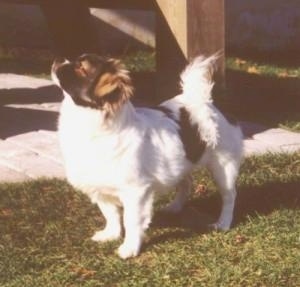 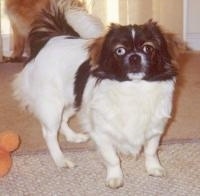 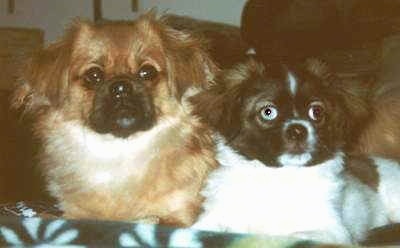 Teddy and Xena the Tibetan Spaniels, photo courtesy of Tibbies-R-Us 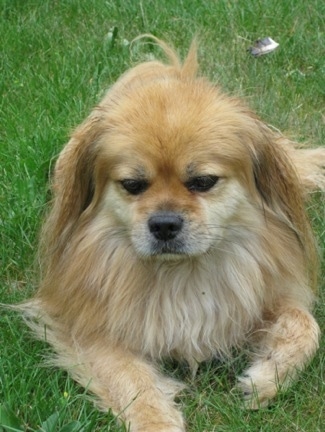 "This is my Tibetan Spaniel. His name is Jeff and he just celebrated his 12th birthday on December 18. He loves attention and cuddling, but does not like to be picked up or held too close, probably because he has Small Dog Syndrome. He loves playing with other dogs and finds himself getting out of the fenced yard to walk down the street and visit all of the neighbors, who absolutely adore him. He's very intelligent. He knows how to sit, stay, jump, sing (and try to match the pitch of the piano), and he also knows how to get away with everything by giving you those big puppy dog eyes that he has with his head down. He is very confident around large breeds of dogs and tries to start fights with neighbor dogs by sticking his head through the fence to get a reaction out of them. He is, however, afraid of any type of beeping noise, fireworks and lightning. He is not aggressive toward humans (he loves babies) or other dogs, but he likes to chase wild rabbits and birds and kill them…sometimes in front of people. All in all, I wouldn't trade my Jeff for any other dog out there!!!" 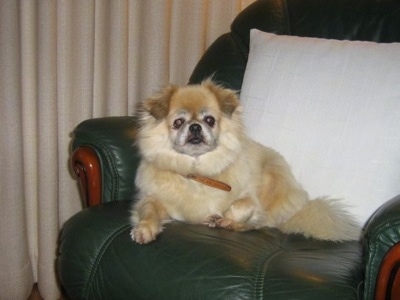 "Zoe is a healthy and active 15 year old Tibetan. She walks two miles a day. Keeps watch out on our windowsill for two hours a day. Eats well, sleeps well. A wonderful pet at our home in Cork, Ireland, since 1995. A gift from my daughters Niamh and Eimear when I had a heart attack in 1995. Thanks, Zoe. 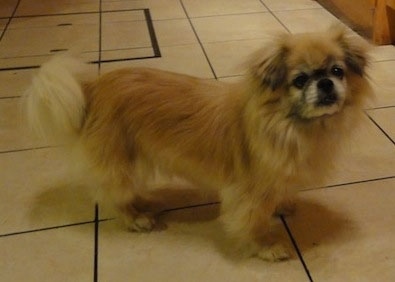 "Zoe is now 17 years old. Her hearing is now very poor but otherwise she is in good health. Walks about one mile every day, eats well and sleeps a lot. Her coat is as good as ever, she is feisty and has good eyesight. Hopefully we will enjoy her company for a while yet. If only I will age as well!!" 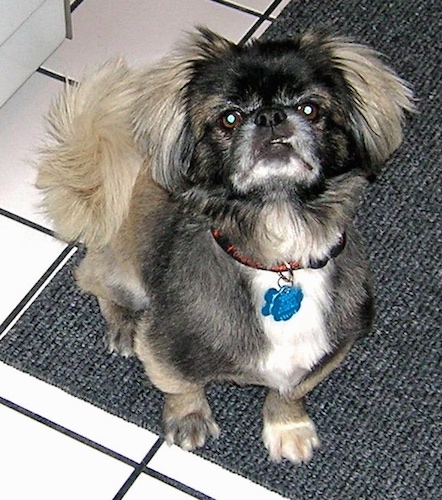 "This is our little Cosmo. He is our pride and joy. Stubborn and demanding but we cannot help but smile and laugh. Wouldn't want any other dog. He's King of the House, Terrorizer of the neighborhood."