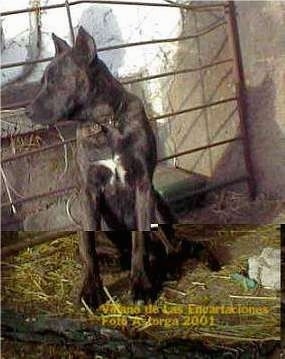 Villanos are a medium sized hunting dog. They are known for their darker brindle coats but can also be solid colors such as dark browns, black, or tan. Their coats are short and flat. Usually, they have a medium length tail and cropped ears.

Villano de las Encartaciones are happiest when guarding a home or hunting animals. They require immense exercise due to their high energy levels which is why they are used traditionally to herd cattles and sheep. In order for this dog to become a house pet, they should be socialized by groups of people at a young age as they are known to be timid and suspicious to strangers. These dogs are gentle, calm, strong willed, and loyal to their pack leader.

Villano de las Encartaciones are recommended for households with large areas of land that they can guard and hunt on such as a farm or ranch. They would not do well in apartment style living or a house with a small backyard due to their high energy levels and need for the outdoors.

These dogs require immense exercise as they were bred for guarding and herding cattle and sheep. They need space to run off leash and should be taken on long walks or jogs daily. If these dogs are left alone and get bored, they may become destructive in household areas. They need both mental and physical exercise. They will happily learn tricks and stay attentive to their leader.

With a short haired coat, Villanos can be easily brushed with a firm bristle brush and should be dry shampooed occasionally. Bath with mild soap and warm water when necessary. These dogs are average shedders and their nails should be trimmed regularly.

With some saying Villanos date back to 1100 and others claiming they were bred in the 19th century. It is unclear when the Villano first originated. The group who believe Villanos modernized in the 19th century say this breed was created by mixing Spanish Alanos with a wide range of sheepdogs and hounds specifically including the Basque Herder. Villanos can be traced back to the Azores Cattle dog, Cimarron Uruguayo, and the Presa Canario from when sailors brought dogs to the Spanish Colonies. They have also been traced back to the Spanish Bulldog from which they say Villanos are a lighter, more agile, and faster breed. The Villano has been traditionally known to live on farms in Western Spain. They would herd sheep, guard the farm, hunt large animals, and control the cattle by biting down and holding onto the bulls head. During World War II the Villano de las Encartaciones would have went extinct if it were not for efforts made in the 1960’s to save this rare breed. Today, there are said to be less than 100 Villano de las Encartaciones left in the world. 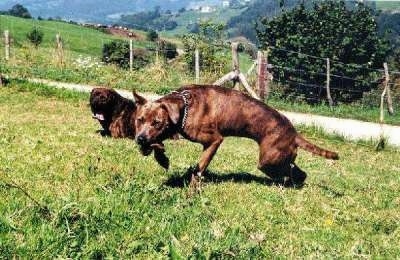