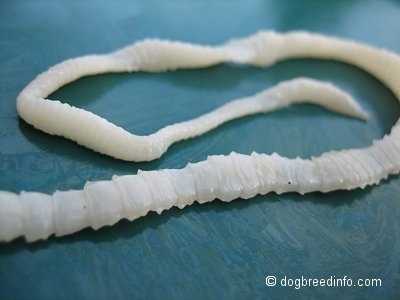 There are a number of different worms that can affect your dog: roundworms, tapeworms, hookworms, whipworms and heartworms. Some live in the intestines and some in the tissue. Many worms do not pose a problem for your dog at all, and you will not even be aware that they are even there. Some worms can be tolerated in small numbers, but in high numbers can create serious problems.

Generally a dog should be treated every six months for roundworms and tapeworms. They are the most common, with roundworm being the bigger problem.

Puppies should be treated starting at 2 to 3 weeks of age and every 2 weeks after until the puppy reaches about 3 months old as advised by your vet with vet recommended medicine. Be sure to deworm the dam. Talk to your vet.

You MUST check with your local veterinarian to find out what is in your area, and how your puppy or dog needs to be treated.

In all areas where there are dogs, there are roundworm eggs. 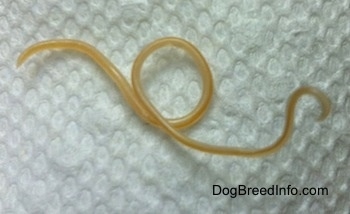 Roundworms, also called ascarids, are of whitish color. They look just like a piece of cooked spaghetti, and live in your dog’s intestine. They can reach up to eight inches in length (20cm) and feed off of your dog’s food, in the intestine. Roundworms shed eggs continually. You can either treat your dog for roundworms every six months, OR you can have it tested and only treat if your dog has them.

Roundworms migrate throughout the blood into the lungs, are coughed up, and usually re-swallowed. Sometimes the larvae can travel through the liver and brain.

You may never see these worms, and one day one may come out in the dog's stool. They can cause bloating, diarrhea and vomiting. Your dog may stop eating, after passing a stage of overeating, and always being hungry.

In young puppies untreated roundworms can cause the bowel to rupture. Puppies get roundworms from their mom, as the larval worms migrate into the womb, or into her teats. A pregnant dam can be treated for roundworms, and should be. Ask your vet.

Dogs should be discouraged from pooping where kids play, as roundworms are especially dangerous to children. Roundworm eggs can lie dormant in a sandbox for years. Once they enter the child host they can migrate to the child's liver, lungs, eyes or brain and become permanently encysted.

Tapeworms look like a piece of rice on the stool but not in it, or sometimes can be seen sticking like little white eggs to the dog’s anus. Dogs with tapeworms will often scoot across the floor.

Many vets recommend worming for tapeworm and roundworms every 6-12 months.

You cannot treat a pregnant or nursing dam, or puppies for tapeworm.

Like roundworms, people can also get tapeworms. People can get tapeworms from ingesting a flea from a dog, which is not hard; considering a flea is so small, it could easily land on your plate, or your hand, and be ingested unnoticed. A tapeworm is not that dangerous to a dog, it is referred to by some as the smart parasite, but it can be dangerous to people, causing serious liver disease. 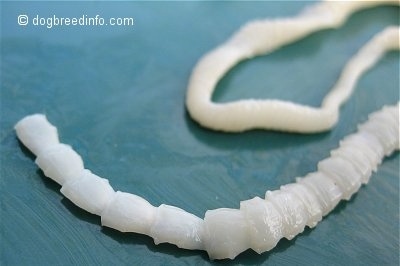 The tapeworm actually consists of many white segments, joined together like a tape. They tape together and can get to be several feet long. Then they drop off to multiply. It is the segments that are seen as they shed. These segments contain the eggs which look like wiggling grains of rice.

Looks like roundworm, but has teeth at one end that grab onto the dog’s intestine and attaches itself with it's six sharp teeth, drinking it's hosts blood. It changes the attachment site at least six times per day. There is blood loss to feed the bloodsucking worms, but most blood is lost at the spots of detachment until they heal, thus causing anemia and iron-deficiency. If left untreated hookworms can kill a dog, especially a puppy. Puppies can acquire the worms through their mothers milk. If some of the puppies in the litter have died, hookworms should be considered as a possible cause. Deworming must be repeated in about 30 days as the wormer only kills the worms living in the GI track. The second worming kills the worms which were in the migration process, which would have completed their cycle within that time period. If you do not repeat the worming in about a month the worms will once again take over the intestines.

Hookworms and whipworms are bloodsuckers. These can make a puppy anemic.

Heartworms live in the heart and large blood vessels. They are about six inches long. They are spread by mosquitoes. The tree-hole mosquito, which breeds in oak trees, is very good at spreading heartworms. They live in areas where oak trees thrive. If you have oak trees in your area, you most likely live in an area where there are heartworms. Heartworms show no symptoms at all until the disease is very advanced. When symptoms do appear they are the same as the symptoms for congestive heart failure—sometimes causing fainting, coughing, difficulty breathing, dull coat, lack of energy, and an enlarged abdomen. Heartworms can be prevented. Dogs should be tested for heartworms, then given a preventive medicine. It is not wise to wait until symptoms appear before treating this dangerous worm. Talk to your vet.

All dogs at some time in their lives have worms, but with modern treatments, they are easily eliminated, and harmless to your pet. IF ALL dogs were regularly treated for worms, the risk to human health could be reduced greatly.

Are not visible to the naked eye. Vet diagnosis only.

Contrary to what the name suggests, ringworm is not a worm. It is a fungal infection of the skin that is contagious to other dogs, animals and to humans. There are several different treatments including a sulfur dip which can be purchased at the vet. A holistic approach is to use a topical neem oil which has been proven to kill a wide variety of fungus and mites. It also acts as an insect repellent. Mane Tail Groom (M-T-G), which is primarily used for horses, is also safe and effective to use on the ringworm fungus. 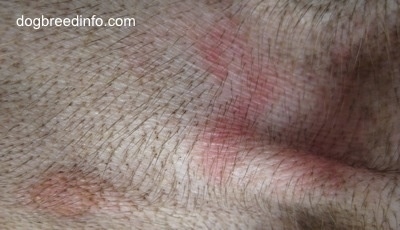 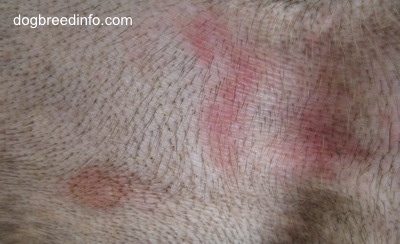 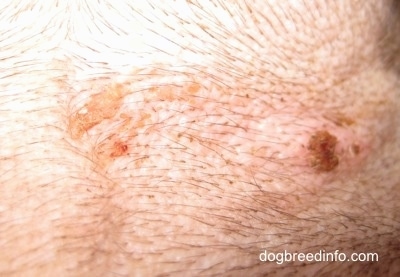 See more examples of the Tapeworm