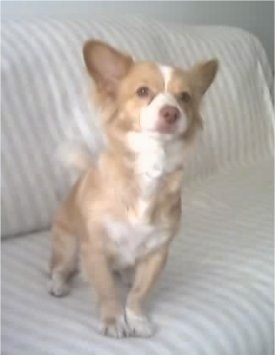 Rita the Alopekis at 2.5 years old; she lives in Thessaloniki, Greece.

The Alopekis are fox-like, with relatively short and smooth coat, wedge-shaped head and sickle-tail, pricked ears and smart expression, body longer than the dog's height at withers, swift and graceful movement. The wedged muzzle tapers evenly to the nose without being pointed or undershot. It has a light but visible stop. Topline of the muzzle is level. The muzzle is deep and broad at its root, with strong jaws. The skull is broad, very slightly domed, with ample brain room. Cheeks are developed but not prominent, flat and deep. The occipital bone is not prominent. The frontal furrow is visible between the eyes and disappears smoothly along the rise of the skull. The brows are well-developed over the large eye orbits. The jaw is strong, with even and regular teeth (scissor-bite). The lips are taut. The eyes are rather large, in shape almond to round, bright, intelligent, of normal position and neither deep-set nor protruding, of color in accordance to the coat and well-fitting eyelids. The nose is broad, with well-opened nostrils. Not too large in relation to the muzzle, elastic, moist, flat and level on its front surface, protruding very slightly over the top lip. The ears are triangular, large, slightly rounded at their tips, erect and very mobile. The arch of the neck is visible but not too accentuated. The length of neck is medium, strong and without dewlap, cylindro-conical in shape, blending smoothly onto the withers. The body is longer than the height of the dog, with broad and deep enough chest, well-extended ribcage without barrel-shaped or flat-sided ribs, with good spring and forechest. The back is strong and curves slightly over the muscular, broad loin and croup. The forequarters are well-laid back with shoulder blades forming good angles with the upper arms, which are of the same length to them. The forelegs are straight, with good but not heavy oval bone, strong wrists and elastic pasterns, which are set slightly oblique to the vertical without falling off too much. The feet are elliptical, not as round as the cats in shape between the round and the oval, with short, strong nails and elastic, thick pads. The rear hindquarters are well-rounded, good length and angle of pelvis, very broad, wide and muscular thighs, forming good angles with the well-developed stifles, strong knees and hocks, straight, vertical and perfectly parallel to each metatarsal, turning neither in nor out. The tail is long, forming a sickle, reaching the hock joints, set and carried relatively high, with elegant curve, neither falling tightly on the back nor carried vertically erect. Mobile and happy in motion, with coat forming a brush underneath. The double coat is of good quality, with a hard and smooth outer coat, soft and dense under coat. The jacket is thicker and longer around the neck, forming a brush under the tail, breaches on the rear of the thighs and short feathers on the rear surfaces of the forelegs. Medium-short in length, not exceeding 2 inches (5 cm), lying flat on the body or only very slightly wavy, with a natural silky sheen. Comes in all colors and combinations except discolored white (albino). Strong pigment preferred but "winter noses" should not be penalized. Both eyes must be of the same color, neither blue nor transparent (watery). Light yellow eyes (like a prey-bird's) are a serious cosmetic fault. Two coat varieties occur, shorthaired and wirehaired. The wirehaired type is very rare, but with work it could also be developed. This breed is also smaller and lighter than the Small Greek Domestic Dog.

Small, multi-purpose utility and house dog of urban and city life. A faithful and devoted companion. Tireless and eager helper, of pleasant disposition and high intelligence, an easily trained worker. Strong, healthy, hardy and of moderate needs. Watch-dog, ratter, flock-attendant, possessing a natural hunting instinct. Very playful, sociable and very clever. Eager to please his owner, with faithful devotion. Alopecis is a house companion, watchful but self-confident and optimistic. Obedient, lively, alert, attentive, out-going and happy by nature. Friendly and even-tempered. Protective of people and house animals, relentless enemy of vermin. An enthusiastic worker, highly trainable, extremely agile, with a hunting instinct and playful disposition. Alopecis is the valued companion of the Greek people from antiquity to this day. Full of courage and always bright-eyed, ever-ready for action. Tireless and capable of covering great distances, athletic and with fast reflexes. Positive-thinking and resourceful, with great stamina and persistence. Adaptable and eager to the needs of the master. Full of grace in manners and pleasant in its habits. This is an unspoiled breed of dog, useful in many tasks and blessed with centuries-old resilience and canine wisdom. A true "multum in parvo,"* feeling equally at home in any environment, urban or rural alike. Make sure you are this dog's firm, confident, consistent pack leader to avoid Small Dog Syndrome(human induced behavior problems). Always remember, dogs are canines, not humans. Be sure to meet their natural instincts as animals.

*in Greek the phrase is: "polla en smikro," meaning many things in a small package.

The Alopekis is suitable for urban or country life, small apartment or farm. It is a very adaptable dog.

The Alopekis should be taken for long daily walks. They need free play, but can adjust to a small household provided they get frequent walks. Very athletic little dogs, ideal for mini-agility!

Easy to groom and care for.

The ancestors of this breed are the primitive dogs that appeared in Greece during the proto-Hellenic era of the Pelasgoi people. Findings exist as far back as the Paleolithic age settlements in Thessaly. Referred to by the ancient Greeks as "alopecis" (small and fox-like). Similar dogs have been depicted on ancient Greek sculptures as well as other archeological finds. The Alopekis occurs naturally in the general Greek stray street populations, although they are now being carefully bred. At one time the Alopekis and Small Greek Domestic Dog were considered to be different types of the same breed. This has since changed and provisional standards have been written for each breed since both breed true to type. In terms of numbers, this breed is less common than the Small Greek Domestic Dog, although both breeds would be the easiest and most likely breeds to be exported from Greece and established elsewhere.

In ancient Greece a hairless variety existed, which was sometimes wrongly called the Turkish Naked Dog. Unfortunately this type has become extinct. The reason for this extinction is twofold. The first is that the climate in ancient Greece was warmer than the current climate. This allowed the hairless variety to survive, but as the climate began to cool the hairless Alopekis needed human intervention to stay alive. This did not occur because of the fact that many ancient Greeks considered this type to be ugly. 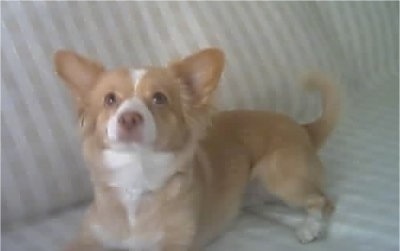 Rita the Alopekis at 2.5 years old; she lives in Thessaloniki, Greece. 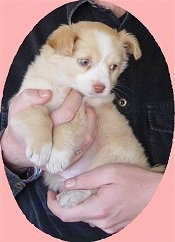 Rita the Alopekis at 2 months, at 4 months and at 1 year old

Thanks to Maria Winsor-Ginala for providing Dog Breed Info with this information.

Also thanks to Cory Leed for providing Dog Breed Info with some of this information. And a special thanks to Phil Taormina for helping Cory with the info.