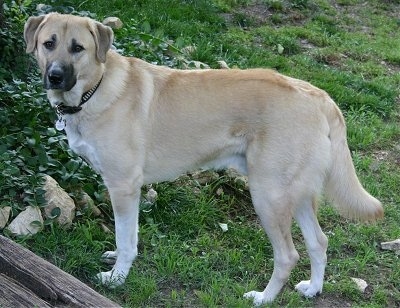 Male Anatolian Woodyacres Cenk Koda aka Koda at 18 months old—"Koda was a lot of work as a pup, intensive socializing, firm but loving discipline, and so much time invested bonding. But it was worth every moment. Koda is a wonderful companion. He passed his Canine Good Citizen and is now training for therapy dog certification at the relatively young age of 18 months. And he makes me laugh every day."

The Anatolian Shepherd Dog is a large, rugged and powerful livestock guardian. He is very similar to the Great Pyrenees and the Kuvasz, but is more slender and agile. The head is in good proportion with the rest of the body, large and strong, slightly rounded, with a slight stop. The muzzle is often black and is rectangular in shape. The lips are black and hang down slightly; dewlap should not be excessive. The upper lip should not hang down lower than the bottom jaw's lower edge. The teeth should meet in a scissors bite, but a level bite is acceptable according to the written standard. The triangular, pendant ears should be set no higher than the plane of the head. They should be V-shaped with a rounded tip and are often black. In Turkey, the ears are often cropped very short. The eyes are medium size, set apart, almond shaped and dark brown to light amber in color. Eye rims are black in all dogs except those of the liver color, where they are brown with a brown nose. The neck is thick, slightly arched, powerful, muscular, and has a slight dewlap. The topline will appear level when the dog is in motion and will be slightly rounded at the loin. The chest is deep and reaches to the elbows. The back is powerful, muscular and level; short relative to the leg length. The front legs should reach out smoothly with no obvious pounding and are straight and set well apart. The tail is set rather high. It should be long and reaching to the hocks. When relaxed, it is carried low with the end curled upwards. When alert, the tail is carried high, making a "wheel." Both low and wheel carriage are acceptable when gaiting. The "wheel" carriage is preferred in the show ring. The tail will not necessarily uncurl totally. The short or rough double coat is generally fawn with a black mask, though all color patterns and markings are equally acceptable including pinto, white and brindle. Coat is longer around the collar and the tail. The length will vary depending on the dog’s lineage and the season. There are two basic coat types: medium length and medium long.

The Anatolian Shepherd is a flock guardian with a superior sense of sight and hearing. It is not a herding dog. It is very loyal, alert and capable of great speed and endurance. It is intelligent, alert and easy to train, but is not a dog for beginners. It needs a handler who naturally radiates leadership. Independent, calm, unwavering and brave, but not aggressive, they tend to bark at night and if they are living indoors with you, you need to correct this behavior if it is unwanted. Since the Anatolian Shepherd is a born flock guard it will be very watchful and can become possessive if not kept in its rightful place below the humans. If it sees itself above the family it may act affectionate with them but very suspicious of strangers to a point where it is a problem. This is an issue that is particularly worrisome after the dog reaches adulthood. This is why it is very important that the dog sees the humans as boss. Being a flock guard, it will always have an instinct to protect and this cannot be bred out or raised out of it, however a dog that accepts the humans as its leader will also accept the strangers that the humans formally introduce to them. It will also look to the humans as the ones who make the decisions. You do not want a dog of this size and strength living in your home making all of the calls. The Anatolian Shepherd will still be possessive with the home and property, not allowing anyone in if the owner is not home, unless it has had frequent contact with the person. Friends of the family will be welcomed. This proud dog is demanding of itself, and can be stubborn and dominant if it sees itself as a leader of the home. When training the Anatolian Shepherd, the best results are achieved by motivational training methods with a determined, firm, confident, consistent and loving approach. This is not a dog for the passive owner or an owner who does not understand canine instinct. It is very important to begin training as early as possible, because a fully grown dog may be too strong and too big to be corrected by the average person. Owners who do not display natural, very strong, but even tempered, authority over the dog will find the dog to have his own ideas and will obey known commands if it does not wish to do so. Sensitive to reprimands and eager to receive affection, this breed is patient and protective with children of the family, but may accidentally knock them down. Children should always be supervised and properly introduced. Confident, the Anatolian Shepherd does not require any additional protection training. It already has very strong protection instincts which will get stronger as the dog matures. These instincts will peak at around one and a half years of age. They will generally get along with other animals provided they have been introduced to them when they are still young. They can be rather dominant towards other dogs and it is important to socialize them while they are still young. These dogs mature slowly, reaching full adulthood at about four years old.

Dogs that are going to work as flock guards should not be family pets or they will prefer the family over the animals they are supposed to be guarding. They need to be socialized with humans coming into the field so it is possible for them to receive veterinary care and any necessary grooming, but should live their entire life with the flock and not brought inside the home with the humans. This socialization should take place while the dog is a puppy. Anatolians will walk the border of their territory every night, then find a high place to lie down to watch over their charges. Every few hours they will get up and walk around their flock again just to make sure all is safe. If they detect danger they will give off a deep warning bark. If that does not scare away the threat they will deepen their bark, making themselves sound more serious and alerting the flock to gather behind them. If the danger persists and approaches the flock the Anatolian will attack, but this is always saved as a last resort. Extensive early socialization, obedience training and consistent dominantleadership are very important when owning an Anatolian Shepherd.

Prone to hypothyroidism or to eyelid entropion. Hip dysplasia does occur, but is not as common as in some other large breeds. They are sensitive to anesthesia. The Anatolian Shepherd's immunity often takes longer to develop than with many other breeds and therefore you should talk to your vet about giving young Anatolians extra vaccinations against Parvo-virus.

Anatolian Shepherds are not recommended for apartment life. They are relatively inactive indoors and will do best with at least a large yard. This breed is very suspicious of strangers, and it is therefore necessary to provide a secure, fenced yard.

This breed needs a lot of exercise. They do best when they can run free in their own fenced-in yard, but still need to go on long daily walks. Does best with a job to do; a flock to protect.

This breed requires little grooming. The coat needs thorough brushing-out during the twice-a-year shedding seasons. You can get away with little attention the rest of the year. The Anatolian Shepherd is a seasonal, heavy shedder.

The Anatolian Shepherd is native to Asia Minor. It protects flocks and serves as a shepherd's companion. On the high Anatolian Plateau, summers are hot and very dry and winters are cold. The Anatolian Shepherd Dog is able to live outside all year round. For centuries the ancestors of the Anatolian Shepherd were used as combat dogs in war and for hunting. It was particularly valued for the victorious battles it could fight with wolves. The Turkish people would put a spiked color on them to protect their necks from getting bit by predators who attacked their charges. As a sheepdog, it was bothered by neither fatigue nor bad weather. Today it is still used as a sheep dog as well as a guard dog. The Anatolian Shepherd is very closely related to the Kangal Dog and some people even declare all Turkish shepherds i.e. the Kangal Dog, to be one breed, the Anatolian Shepherd, however the true Turkish Kangal Dogs are said to be a separate breed from the generic Turkish shepherd's dog. The isolated historical conditions of the Sivas-Kangal region have resulted in the development of the Kangal Dog as a distinct breed which has been declared the National Dog of Turkey and a national treasure. The true Turkish Kangal Dogs are first and foremost still primarily working shepherds. The export of pure Kangal Dogs from Turkey has been controlled and now is virtually forbidden. The Kangal Dog Club of America continues to work to ease import restrictions. Imported dogs are considered to be extremely valuable for their potential contribution to the genetic pool in the United States. The Anatolian Shepherd was recognized by the AKC in 1995. 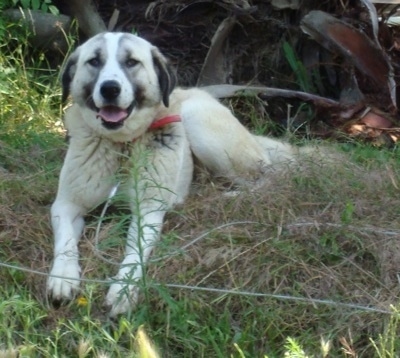 "This is Jolly, our Anatolian Shepherd at four years old. She is loyal, very playful, and great with children but loves to roam around as all shepherds do. Despite her size she is very gentle toward other dogs and people but alert toward strangers." 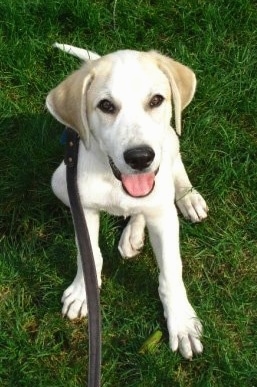 "This is Bastian. I took this photo of him when he was 4 months old. He's a pinto Anatolian Shepherd, and I would say he's an epitome of his breed. He's very loyal, very intelligent, and extraordinarily stubborn! He is such a fast learner, and he's amazingly calm for such a little pup. He is one of the most submissive dogs I've ever seen. He's not food-driven whatsoever so training is a bit hard (but the fact he's a fast learner balances that fact a bit). He is definitely a people-dog, although loves his play time at the dog park."