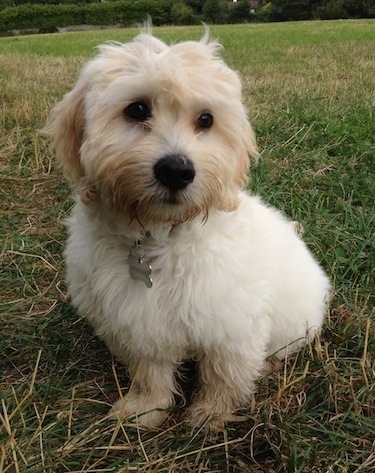 Milo the Bologco at 6 months old—"Milo is just the best mix of dog for our family. He is very well behaved, loyal, companionable and easy to train."

The Bologco is not a purebred dog. It is a cross between the Bolognese and the American Cocker Spaniel. The best way to determine the temperament of a mixed breed is to look up all breeds in the cross and know you can get any combination of any of the characteristics found in either breed. Not all of these designer hybrid dogs being bred are 50% purebred to 50% purebred. It is very common for breeders to breed multi-generation crosses. 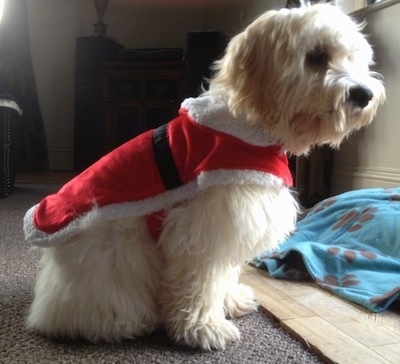 Milo the Bologco at 6 months old—"The most gentle lovely dog. A cute teddy bear face with the softest of fur." 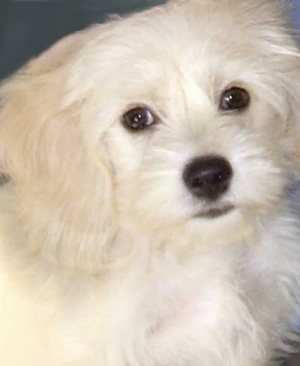 "This is a Bologco, which is an American Canine Hybrid Club registered designer mix. Our kennel is the originator of this mix, and the ACHC accepted our name for it. The first litter of Bologcos was whelped in early July 2007."

"A Bologco is an adorable, first-generation, designer dog mix that is one part Bichon Bolognese and one part small American Cocker Spaniel. The breed mix name is pronounced "Bo'-lo-co," with the accent on the first syllable and with a silent "g.""

"A Bologco is a small-sized pet, with the males averaging a bit above 15 pounds and females a bit smaller. So it is not as small or as fragile as a toy dog, but is still easily picked up and carried by an adult person. And this little mix is sturdy enough for a romp in the park or on the beach, or to play with children or grandchildren. And it is also small enough to travel in the cabin of an airplane in a pet carrier."

"The mix is created from two very friendly and playful purebreds, and of course American Cockers have been a favorite pet dog for generations of kids. And Bichon Bolognese is known for keeping its playful behavior well into older age. And the hybrid vigor—called heterosis—in such a purebred cross makes for a very healthy genetic mix, and both breeds routinely live well up into their teens."

"Bologcos have longer bodies with shorter legs, and their muzzles are a decent length, with well-developed teeth in a scissor bite. Their tails curl back over their bodies, and they have quite a bit of coat that is either wavy or slightly curly, but is not corded like the Bolognese, or straight like the American Cocker."

"Bologcos are adorable fluff balls with the softest hair imaginable, and they come in a very wide range of colors and markings, including off-white, cream, various shades of apricot, black, blue, black masked sable in various hues, and merle, both with and without some white markings. They do not shed and should be hypo-allergenic for most people."

"Bologcos are friendly, curious and playful, with sweet looking "Teddy Bear" faces that are sometimes comical looking, depending on how their beards are clipped. They are not particularly barky, but they do make a good little burglar alarm. They are easily trained, and love to be a constant companion of people."

Courtesy of Bologcos at Suwannee