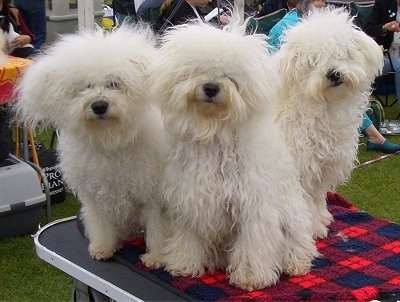 The Bolognese is of small size, stocky and compact, covered with a pure white, long and fluffy coat. Square built, the length of the body is equal to the height at the withers. The head is of medium length, reaching 1/3 of the height of the withers. Its width, measured at the level of the zygomatic arch, is the same as its length. The stop is rather accentuated. The skull of slightly ovoid (egg-shaped) shape in the sagital direction and rather flat in its upper part, has rather convex sides; the protuberances of the frontal bones are well developed. The longitudinal axes of the skull and muzzle are parallel; the frontal furrow is slightly accentuated and the occipital protuberance slightly marked. The length of the skull is slightly more than that of the muzzle. The nose is on the same line as the topline of the muzzle; seen in profile, its foreface is on the vertical. The nose is large and must be black. The muzzle's length is equal to 2/5 of the length of the head; the topline of the muzzle is straight and the sides of the muzzle are parallel so that the fore part of the muzzle is almost square. The lower orbital region is well chiseled. The upper lips are very developed in height; they do not cover the bottom lips, and the bottom profile of the muzzle is determined by the lower jaw. The jaw is normally developed, with top and bottom arches perfectly adapted. The teeth are white, evenly aligned, with strong and complete dentition. Articulation of incisors as scissor bite; pincer bite tolerated. The eyes are set on an almost frontal plan; well opened, of superior to normal in size. Eyelid opening is round; the eyeball must not be prominent; the white of the eye is not visible. The rims of the eyelids must be black, and the iris of a dark ochre color. The ears are high set; they are long and hanging, and rather rigid at their base, so that the upper part of the external ear is detached from the skull, giving the impression of the head being larger than it really is. The neck is without dewlap; its length is equal to the length of the head. The dog being of a square construction, the length of the body, measured from the point of the shoulder to the point of the buttock bone is equal to that of the height at the withers. The straight profile of the back, and that of the loin, slightly convex, merge harmoniously in the line of the croup. The withers are not very prominent from the topline. The chest is ample, let down to level of elbows, with well sprung ribs, the height reaching almost half of the height at the withers. The tail is set in the line of the croup, carried curved over the back. The length of the shoulder blades is equal to 1/4 of the height of the withers; in relation to the horizontal, they are slanting and are near the vertical in relation to the median plane of the body. They are well free in their movements. The upper arms are well joined to the body, of an almost equal length to that of the shoulder, but less slanting. The elbows are on a parallel plane to the median plane of the body. Its length is equal to that of the upper arm; follows a perfect vertical direction. The distance from the point of the hock to the ground is slightly less than a third of the height of the withers. The hair is long all over the body, from head to tail, from the topline to the feet. It is shorter on the muzzle. Rather fluffy, thus not lying flat, but in flocks; never forms fringes. Coat colors include pure white, without any patches or any shades of white.

Very serious, generally not very high energy. Enterprising, docile, enjoying his masters, the Bolognese is slightly more reserved and shy than its cousin, the Bichon Frise. Bolognese enjoy companionship of people and form a close relationship with their owners. Vivacious, playful and happy, Bolognese get along very well with other animals. This willing little dog is quite responsive to obedience training. Outdoors he's rough-and-tumble; indoors he is quiet and happy. They are friendly with strangers. Get them accustomed to people and noises at an early age. Because of this breed’s size, they are prone to Small Dog Syndrome, human induced behaviors where the dog believes he is pack leader to humans. This causes many behavior problems, including separation anxiety and being timid. He may howl mournfully when his owner is busy and cannot pay attention to him, as instinctually the pack leader is allowed to leave the followers, however the followers are not allowed to leave the pack leader. The Bolognese is recommended for older children, simply because the majority of small dog owners do not display the proper leadership, giving them rules to follow and limits as to what they can and cannot do. Also, because of their size, a lot of owners believe they can get enough exercise just running around the house. However, walking your dog means more to a dog than just physical exercise. It is mental and instinctual. Be sure to take your dog for daily pack walks.

The Bolognese is a healthy breed, prone to no real major problems.

The Bolognese is a good dog for apartment life. It will do okay without a yard.

These are active little dogs that need a daily walk. Play will take care of a lot of their exercise needs, however, as with all breeds it will not fulfill their primal instinct to walk. Dogs that do not get to go on daily walks are more likely to display behavior problems. They will also enjoy a good romp in a safe open area off-lead, such as a large, fenced-in yard.

6 or 7 puppies have occurred, but the average is 3

Its origins are confused with those of the Maltese, because its distant ancestors are the same little dogs mentioned in Latin by Aristotle (384 - 322 BC) under the denomination of "canes melitenses." Already known in the Roman era, the Bolognese appears most especially among the very appreciated gifts that were made during a whole era by the powerful of that world. Cosimo de Medici (1389 - 1464) brought no less than eight to Brussels as gifts to as many Belgian noblemen. Philipe II, king of Spain from 1556 to 1598, after having received two as a gift from the Duke d'Este, thanks the donor in writing saying that “these two little dogs are the most royal gifts one can make to an emperor." Bolognese are represented in paintings of Titian, of Pierre Breughel called le Vieux and Goya. This breed is closely related to the Bichon Frise and the Havanese. 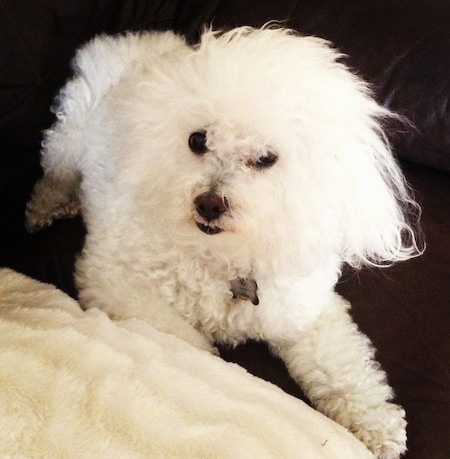 Milo the Bolognese at 8 years old 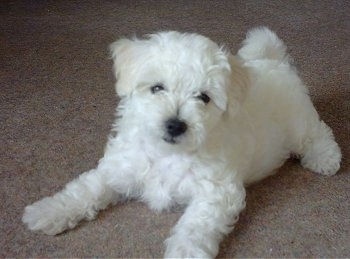 Milo the Bolognese as a 4-month-old puppy 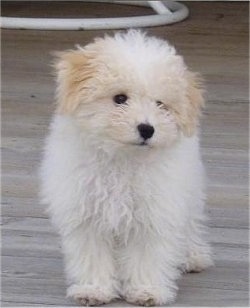 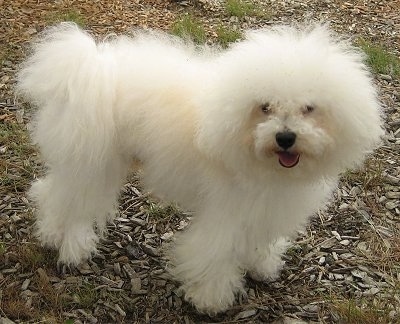 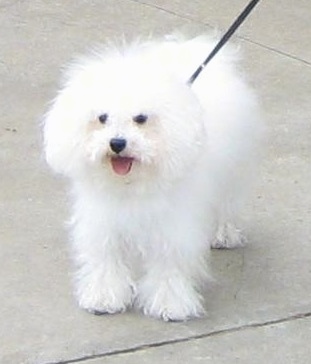 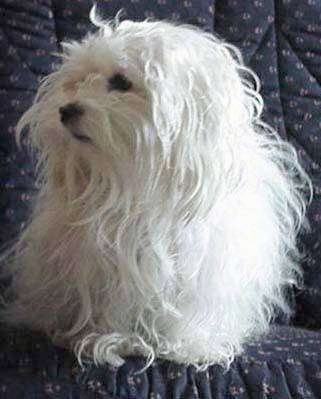 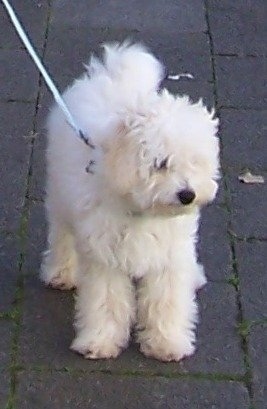 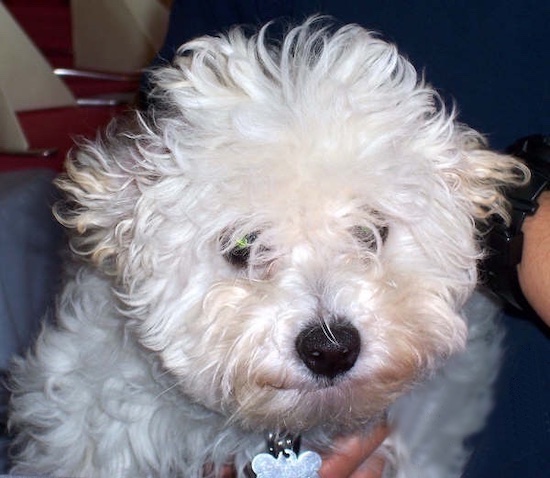 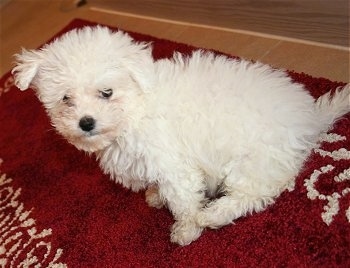 "This is Mazzi, a brand new Bolo (she's 8 weeks old in this picture). She loves to pose for the camera! I have taken over 500+ photos of her and she's only 11 weeks old now. I took this one in my kitchen where she loves to play fetch and nap on the rug."

See more examples of the Bolognese