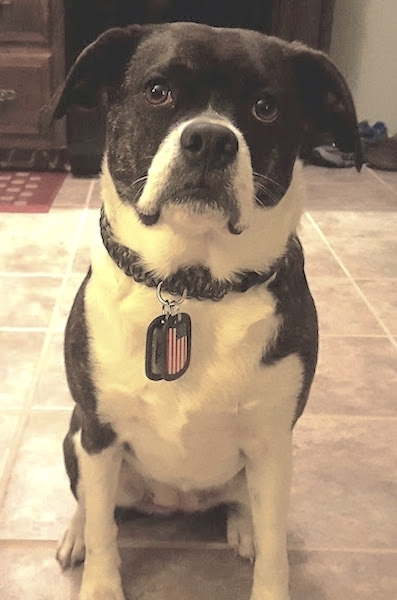 Tasha the Boglen Terrier (Beagle / Boston Terrier mix breed dog) at 1 1/2 years old—"Great pup. Got her as a puppy at 10 weeks old. Very easy to house train and overall a quick learner. Energy is an understatement... 3 mile walk a day average, plus an hour of play afterward. Skiddish around strangers, especially men, but loves children. Protective and full of love. Truly the best dog I've owned. I'd get another in heartbeat!"

The Boglen Terrier is not a purebred dog. It is a cross between the Beagle and the Boston Terrier. The best way to determine the temperament of a mixed breed is to look up all breeds in the cross and know you can get any combination of any of the characteristics found in either breed. Not all of these designer hybrid dogs being bred are 50% purebred to 50% purebred. It is very common for breeders to breed multi-generation crosses. 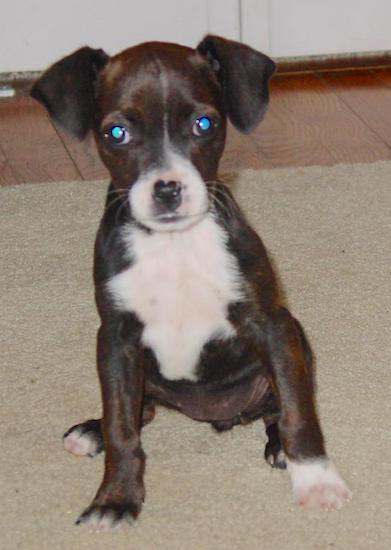 "This little Boglen Terrier puppy is about 3 months old. She weighs about 5 pounds. Her mom was a Beagle, and dad was the Bosten Terrier." 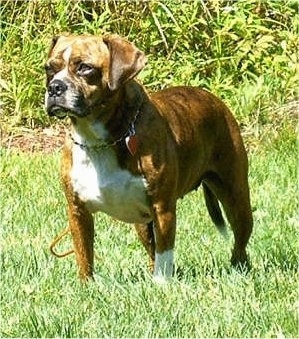 Pudgy the 6-year-old Boston Terrier / Beagle hybrid dog (Boglen Terrier)—her owner says, "She has the most wonderful disposition and is truly the best dog I've ever owned. She knows when to play and when it's time to calm down. She is very quiet, only sounding off her Beagle call when she's frightened. She truly has the Beagle mentality. Pudgy has even chased deer and almost caught them. She is wonderful with my children and puts up with almost anything. I've owned her since she was 2 years old; the previous owners were family members of my husband. That is why we know for sure what she is mixed with. She has no health problems of any kind. The only trait that she is lacking is the desire to follow her nose. This gets her into trouble sometimes and has even gotten her sprayed by a skunk." 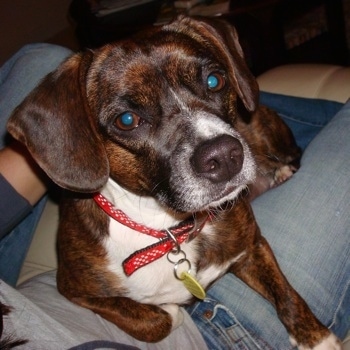 "Daisy the dog, was adopted from an animal shelter that she was in for 2 months. She was 2 years old when this picture was taken. From what I have seen, she is the sweetest dog anyone has ever seen. She does not have a hyper temperament, but enjoys long walks every morning. At first, she was troublesome when her Beagle instincts took over; she followed every scent, even running away on walks. Luckily, my sister would always catch Daisy. For a while, she also had separation anxiety, tearing up the house when home alone. But now, my sister has said she is the sweetest, best dog ever. No longer does she do bad stuff anymore. Daisy loves to cuddle and loves to fall asleep in your lap and snore. She even wraps blankets around herself and will sleep on the couch with you for hours when tired out. People who have hated dogs love her!!" 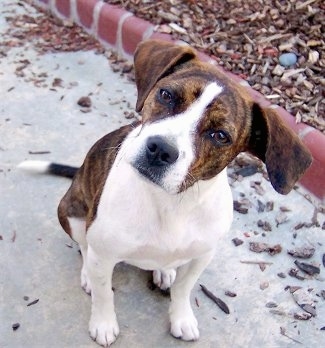 "Cora the Boglen Terrier (Beagle / Boston Terrier hybrid dog) at 1 year old is full grown and can't weigh more than twenty pounds or so. She is little...VERY HYPER, never runs out of energy. True to her Beagle traits, she has to sniff everything and has a strong prey drive. She can and does catch and kill wild rabbits, so we've had to be extra careful when we take her on walks. A little hard to train, not because of a lack of intelligence, but because of a very short attention span. She is totally adorable and very sweet. She LOVES to play tag with our full Boston Terrier Peppy. Great with dogs her size and larger, and great with cats who are about her size as well. Doesn't bark very often. Occasionally howls at the stink bugs that wander through the backyard, but that is about it. Likes to cuddle but only after she has been allowed to run around for a while. VERY FAST. Fascinated by grass. Great with kids. She is crazy, but we love her. Potential owners should know about the energy level...and the prey drive." 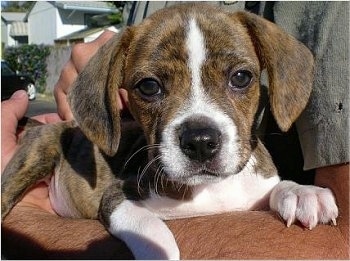 "This is my Boston Terrier / Beagle mix breed puppy named Cash at 9 weeks old. He's a very loving and energetic puppy. We've also seen that he is very smart and attentive to what is going on around him. This is our first time having a hybrid, but the combination seems perfect. He loves playing with other dogs of all sizes, doesn't have a lot of fear and is very social. We definitely see the Beagle side of him a lot. His nose is to the ground and he can sniff out any food that is near him. We think he's going to be a great dog, but is going to need a lot of training and discipline on top of all the love." 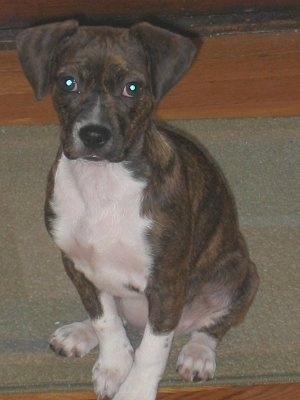 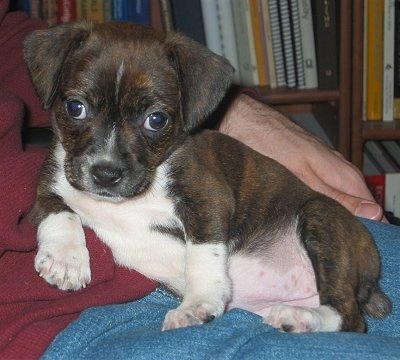 Bosey the Boston Terrier/Beagle mix puppy (Boglen Terrier) at 10 weeks old and just over 4 pounds—her owner says, "She has a lot of energy and loves to play "puppy-style." When she gets all tuckered out she then likes to curl up in our laps for a nap." 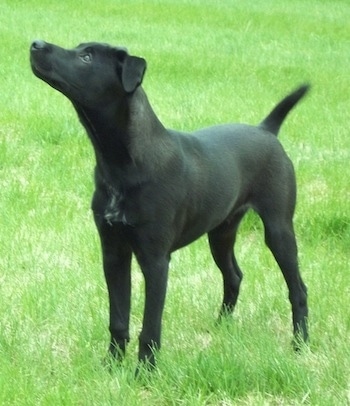 "This is Brady, our black Boglen Terrier. We found him through an adoption agency and his story is he was rescued from a neglectful home in Tennessee when he was about a month old. He is now almost six months old and considered by our vet to be fully grown. He currently weighs ~18 lbs. and is ~17'' tall. Brady is a big baby. He loves to snuggle and is a lap dog at times but is also very active." 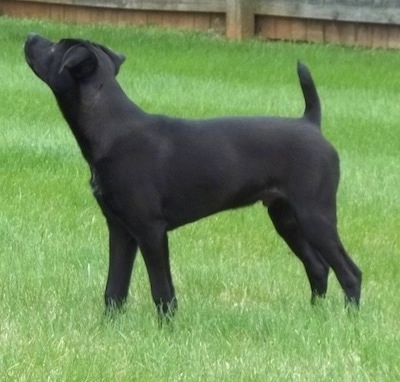 "We consider him to be fearless because he goes right up to the much larger breeds at our local dog park and gets involved in the action. He is very playful and constantly has a ball or chew toy in his mouth. He was rambunctious at first but with the slightest bit of training he has turned into a well-behaved dog. He loves other dogs and is great with other people as well. Potty training was a breeze and Brady never has an accident inside. Anytime he needs to "go" he simply sits at the back door to wait on us to let him out." 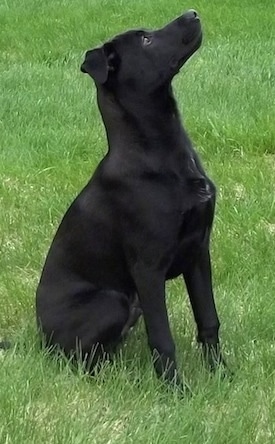 "We consider his best habits to be how well he minds. It took some patience but Brady listens very well and comes whenever called without hesitation. He is a very loyal dog. We are very happy with Brady except for his habit of jumping on visitors. He has gotten better and we feel with a little more training we will wean him away from this bad habit." 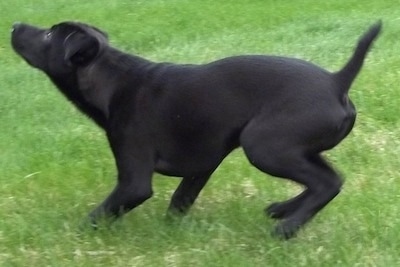 "He has some moderate shedding. We have found that a quick, daily brushing helps eliminate some of this issue. He also gets dry shampoo baths 2-3 times a week to combat the problem. This also helps with his mild dry skin. His exercise consists of daily walks around our cul-de-sac for about 10-15 minutes. We try to take him to our local dog park about 2-3 times a week to let him run his energy out. Overall we were unfamiliar with this mix of breeds and were unaware that it was even given a title of Boglen Terrier. He has turned out to be a great dog."