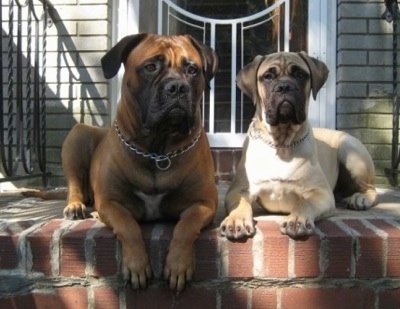 "These are our Bullmastiff puppies, Izzy at 11 months and Sonny at 4 months. They look tough but are the sweetest things on earth! They love watching Cesar Millan and eating just about anything!"

The Bullmastiff is massive, very powerfully built, but is not a cumbersome dog. The large, broad skull is wrinkled and the muzzle is broad, deep and usually darker in color. The forehead is flat and the stop is moderate. The black nose is wide and has large nostrils. The teeth meet in a level or undershot bite. The medium sized eyes are dark hazel. The V-shaped ears are set high and wide, carried close to the cheeks, giving a square appearance to the skull. The strong tail is set high, thicker at the root and tapering and is either straight or curved, and reaches to the hocks. The back is short, straight and level between the withers and the loin. The short, dense, slightly rough coat comes in brindle, fawn, or red, often with black markings on the head.

The Bullmastiff is a devoted, alert guard dog, with a good-natured temperament. Docile and affectionate, but fearless if provoked. Although unlikely to attack, it will catch an intruder

, knock him down and hold him. At the same time, it is tolerant of children. Intelligent, even-tempered, calm and loyal, these dogs crave human leadership. The Bullmastiff is extremely powerful and needs a firm master who is confident and consistent with the rules set upon the dog. They should be thoroughly obedience trained, and should be taught not to pull on the leash. When going in and out gateways or doorways the dog should allow the humans to enter and exit first out of pack respect, because in the dog's mind, the leader goes first. The dog must heel beside or behind the human. This is most important, as not only do dogs have migration instincts and need to walk daily, but instinct tells a dog the pack leader goes first. Be sure to socialize extensively with both people and other dogs at an early age. They can be okay with other pets, depending on how well the owners communicate with the dog. The Bullmastiff is a more dominant breed than the Mastiff. He tends to drool, slobber and snore. Puppies may seem uncoordinated. These dogs are very sensitive to the tone of your voice and need someone to speak with an air of assertiveness, but not harshness. It is not a difficult dog but does require a handler who can assert his authority. The Bullmastiff should never be banished to a kennel. Meek or passive owners will find it hard to control this dog. It will appear willful, possibly aggressive with other dogs and reserved with strangers if owners do not take the time to socialize, and know how to properly communicate what is expected in a meaningful manner.

Prone to cancer, hip dysplasia, tumors, eyelid problems, PRA and boils on the lips. Alsoprone to bloat. It is a good idea to feed them two or three small meals a day instead of one large meal. Gains weight easily, do not over feed. Prone to mast cell tumors.

Bullmastiffs will do okay in an apartment if they are sufficiently exercised. They are relatively inactive indoors and a small yard will do. They cannot tolerate extremes of temperatures.

Bullmastiffs need to be taken on a daily walk to fulfill their primal canine instinct to migrate. Those individuals who do not get this need met are more likely to have behavior issues. While out on the walk the dog must be made to heel beside or behind the person holding the lead, as in a dog's mind the leader leads the way, and that leader needs to be the human. Teach them to enter and exit all door and gateways after the human.

The shorthaired, slightly rough coat is easy to groom. Comb and brush with a firm bristle brush, and shampoo only when necessary. There is little shedding with this breed. Check the feet regularly because they carry a lot of weight, and trim the nails.

The Bullmastiff was obtained by crossing 60% Mastiffs with 40% Bulldogs in the country of England. Mastiff Bulldog types can be found in records as early back as 1795. In 1924 Bullmastiffs began to be judged. Three generations of breeding of Bullmastiffs was required for Bullmastiffs to be registered as purebreds. The Bullmastiff was used as a gamekeeper's dog to track down, tackle and hold poachers. The dogs were fierce and threatening, but were trained not to bite the intruders. When the need for gamekeeper's dogs decreased, the dark brindle dogs so good for night camouflage gave way in popularity to the lighter fawn coloration. It has been prized as a hunting guard, as an aid in army and police work, and is used as a watchdog by the Diamond Society of South Africa. Today's Bullmastiff is a reliable family companion and guardian. It enjoys living with the family, with whom it comforts itself well. 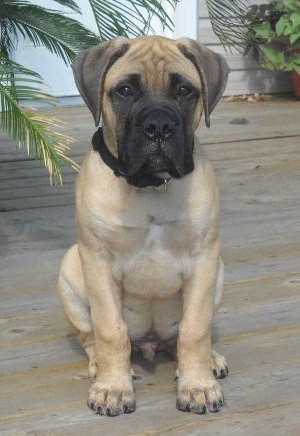 Odin the Bullmastiff puppy at 12 weeks old weighing 35 pounds.—"Odin likes breakfast, lunch and dinner, and especially likes trips to see the other pups in obedience classes." 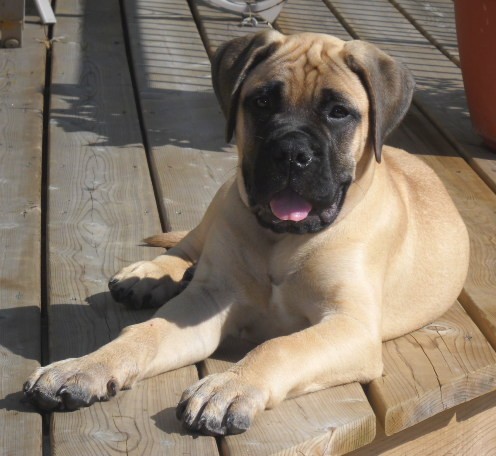 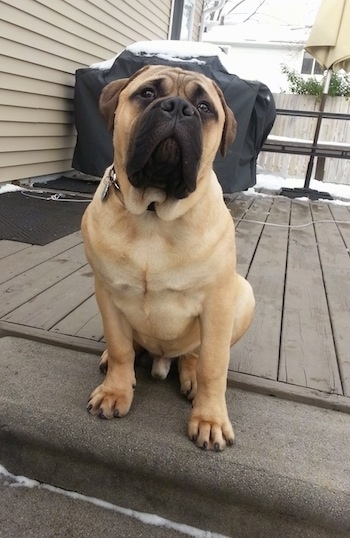 Higgins the Bullmastiff at 7 months old—"Higgins is 7 months old and 85 lbs in this picture. He is a gentle dog and very smart but a little stubborn. Strong and alert, but shy with strangers. I have read and seen a lot of training materials including Cesar Millan. When training, I am as firm as he requires and provide a lot of positive feedback." 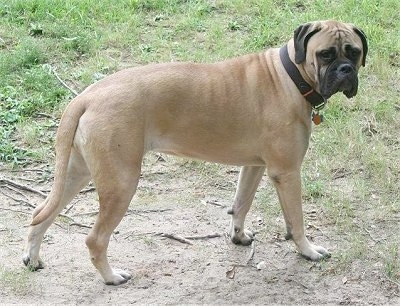 Shirley, a Bullmastiff of Circle J Bullmastiffs, is 1½ years old and 105 pounds. 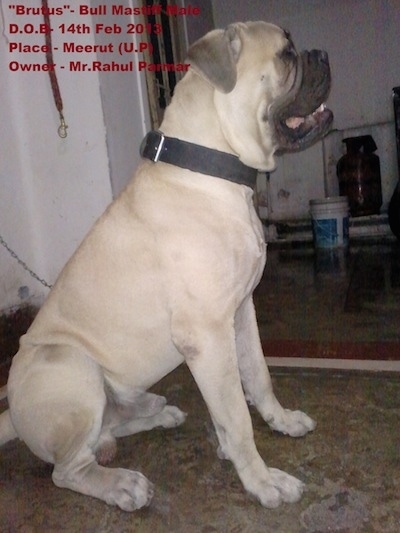 Brutus the Bullmastiff at about 2 years old—"Brutus is a male Bullmastiff. He is very brave, courageous, gentle, lovable and loyal." 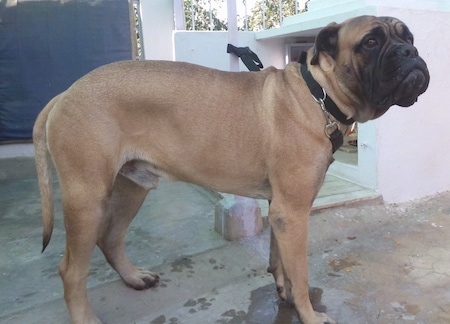 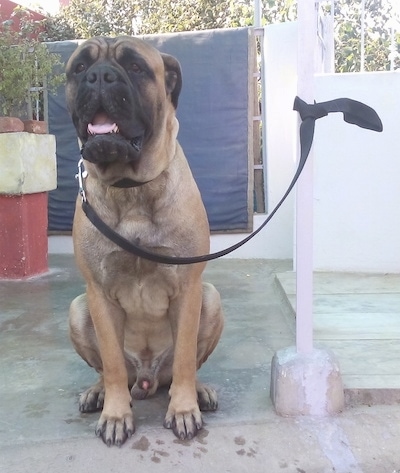 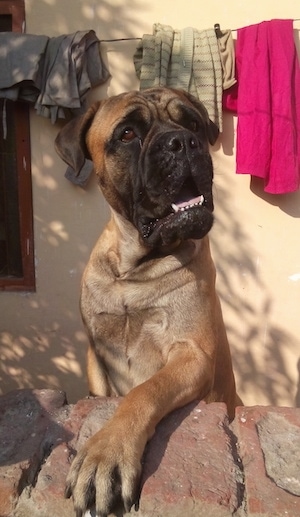 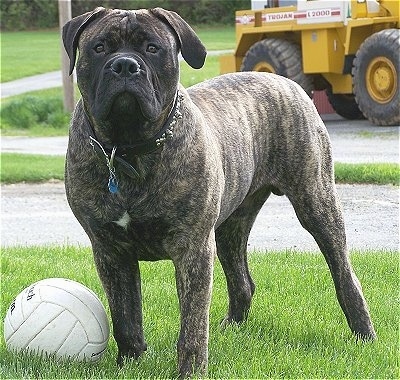 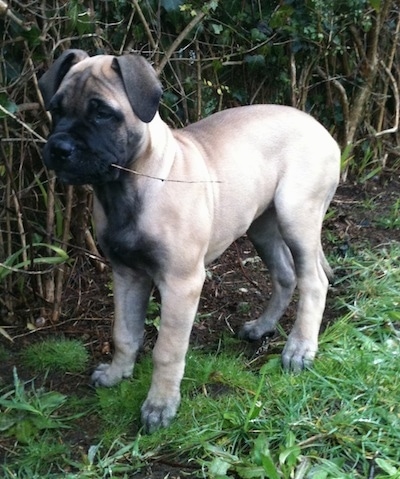 "Lacee is an eleven week old Bullmastiff. She has a service temperament with lots of love to give. Although her puppy days mainly consist of sleeping she has plenty of spunk in short bursts."

See more examples of the Bullmastiff