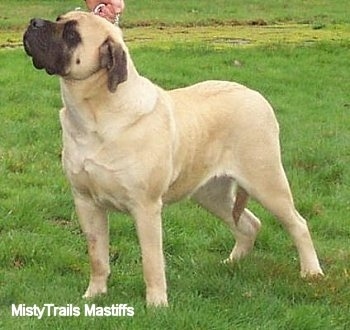 The Old English Mastiff is a massive dog. The Mastiff has a large, heavy, square head with a well-marked stop between the eyes. The muzzle should be half the length of the skull. The medium-sized brown to dark hazel eyes are set wide apart with a black mask around them. The nose is dark in color. The small, V-shaped ears are in proportion with the skull and are dark in color. The teeth should meet in a scissors bite but a slightly undershot bite is also acceptable in the show ring providing the teeth do not show when the mouth is closed. The tail is high-set with a wide base, tapering to a point and reaching the hocks. Coat colors include golden fawn, light fawn, apricot, silver, tiger or brindle.

The Mastiff is a very massive, powerful, muscular dog. Dominance levels vary, even within the same litter, but it is often called a gentle giant. A born guard dog, the Mastiff rarely barks, but it is in its nature to defend its territory and family, and is more a silent guard rather than a barker. When an intruder is caught the dog is more likely to hold them at bay, either by trapping them in a corner or lying on top of them rather than an all-out attack. You do not need to train your Mastiff to guard. No matter how friendly it is, if it senses danger it will naturally guard on its own unless the owners are there to tell it otherwise. Self-confident and watchful, these dogs are patient and considered excellent with children. Intelligent, calm, even-tempered and docile, this breed is very large and heavy. They respond well to firm, but gentle, patient training. They love to please and need a lot of human leadership. Socialize them well to prevent them from becoming aloof with strangers. Owners need to be firm, calm, consistent, confident with an air of natural authority to communicate to the Mastiff that dominance is unwanted. If socialized with proper leadership it will get along well with other dogs. The Mastiff tends to drool, wheeze and snore loudly. It can be somewhat difficult to train. The objective in training this dog is to achieve pack leader status. It is a natural instinct for a dog to have an order in its pack. When we humans live with dogs, we become their pack. The entire pack cooperates under a single leader. Lines are clearly defined and rules are set. Because a dog communicates his displeasure with growling and eventually biting, all other humans MUST be higher up in the order than the dog. The humans must be the ones making the decisions, not the dogs. That is the only way your relationship with your dog can be a complete success.

Beware of hip dysplasia. As these dogs are prone to bloat, feed two or three small meals a day, instead of one large one. Also prone to CHD, gastric torsion, ectropion, PPM, vaginal hyperplasia, elbow dysplasia and PRA. Occasionally seen is cardiomyopathy.

The Mastiff will do okay in an apartment if it is sufficiently exercised. They are relatively inactive indoors and a small yard will do.

Mastiffs are inclined to be lazy but they will keep fitter and happier if given regular exercise. Like all dogs, the American Mastiff should be taken on daily regular walks to help release its mental and physical energy. It's in a dog’s nature to walk. While out on the walk the dog must be made to heel beside or behind the person holding the lead, as in a dog's mind the leader leads the way, and that leader needs to be the human. They should always be leashed in public.

The smooth, short-haired coat is easy to groom. Brush with a firm bristle brush and wipe over with a piece of toweling or chamois for a gleaming finish. Bathe or dry shampoo when necessary. This breed is an average shedder.

The English Mastiff was founded in Britain. A very old breed, it was depicted in Egyptian monuments as early as 3000 BC. The breed fought alongside British soldiers in 55 BC. Caesar brought a pack of Mastiffs to Rome where the dogs were put on display as arena gladiators and forced to be in fights with human gladiators, lions, bull baiting, bear baiting and in dog-to-dog combat. They later became popular with the peasants in England where they were used as a bodyguard, protector of wolves and other dangerous predators and as a companion dog. In the eighteenth century the Mastiff was described: "As a lion is to a cat, so is a mastiff compared to a dog." It is believed that a Mastiff came to America on the Mayflower. Later more were imported. Like most breeds by the end of World War ll, the breed was almost extinct in England. Dogs were imported from the USA and Canada and are once again well established in England. Some of the Mastiff's talents include: watchdog, guarding, police work, military work, search and rescue, and weight pulling. 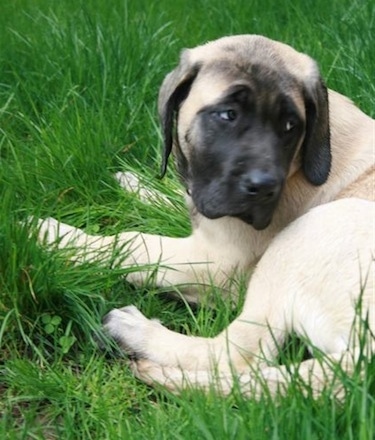 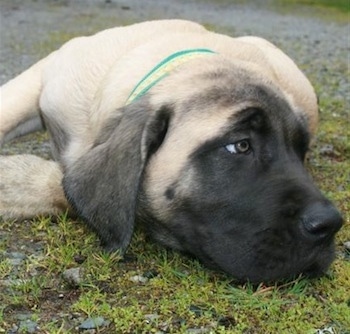 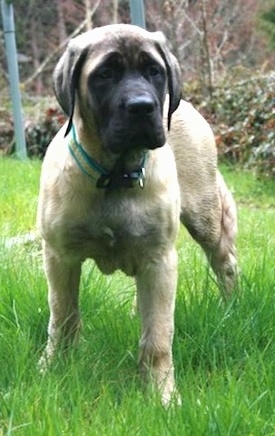 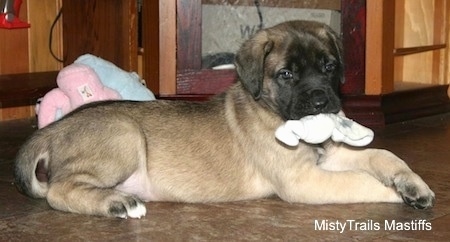 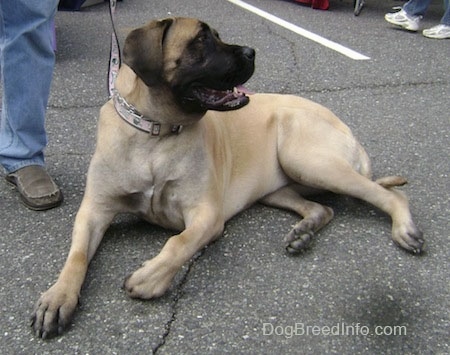 Duvall the purebred Mastiff at 2 years old—"Duvall is a rescue dog who is recovering from hip surgery. She is very calm and well behaved." 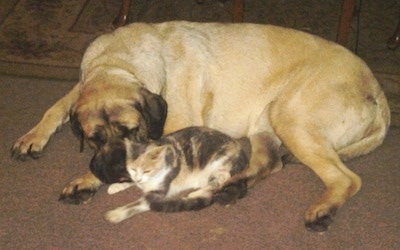 "These are pictures of my Old English Mastiff Sadie with my cat Jupe. I am sending this just to show how gentle these dogs really can be. These two are buddies. Sadie was bought from a breeder in Columbus, Ohio, and weighed in close to 170 lbs. on her last vet check-up. She is just over 2 years old in these pictures." 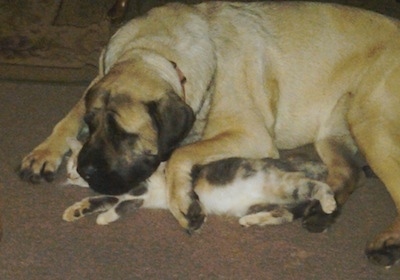 "We used "Bark Busters" techniques to train her. She is an inside/outside dog who has full roam of the yard with an invisible fence and collar. She is accompanied from a puppy by an older black Labrador Retriever. The two kittens were introduced to her when she was about 1 and a half. She has a great temperament and is very gentle and loving to all family members (including the cats)." 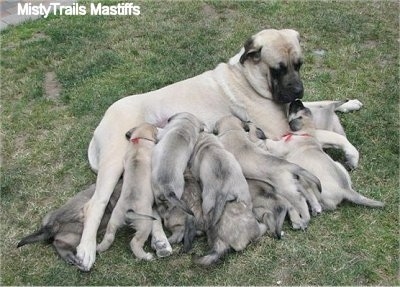 Sassy the English Mastiff and her litter of 11 adorable Mastiff puppies at 5 weeks old, photo courtesy of MistyTrails Mastiffs 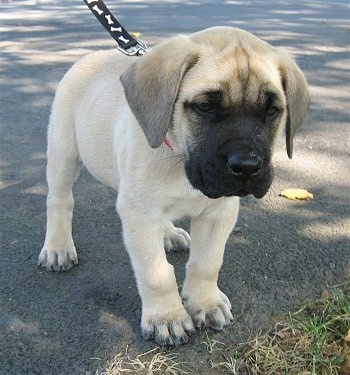 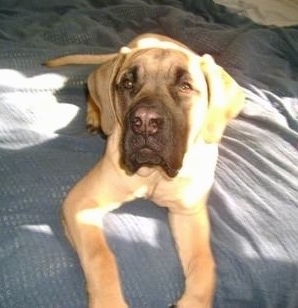 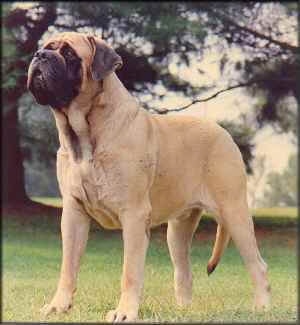 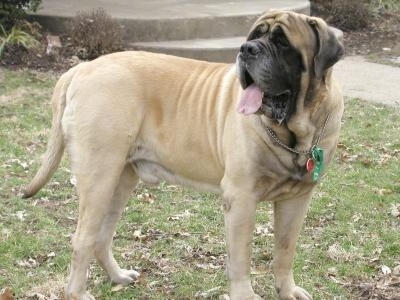 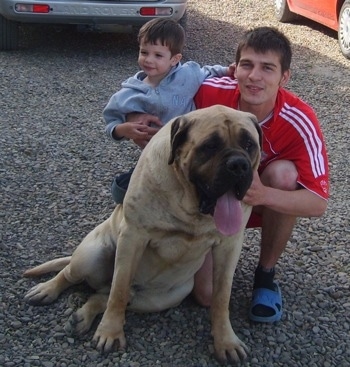 "This is Amon, a 5-year-old Old English Mastiff (male). He is the best dog that I've ever had; very balanced and obedient. He loves everyone in the family and shows affection to everyone. He is very smart and I believe that he represents this breed very well by his looks and behavior. I rescued him 2 years ago when I bought him from a man that mistreated him. He had weighed 55 kg (121 pounds) and now he is 95 kg (209 pounds). Amon is a very happy dog and we love having him in our family, especially my son Kevin."

See more examples of the Mastiff