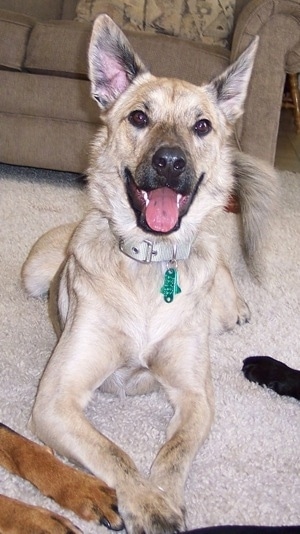 "Louie's parents were purebred German Shepherd and Chow Chow. He looks like a little shepherd; the only Chow Chow I see are black spots on his tongue. Louie is 1 year 8 months in this picture and weighs 60 lbs. and is very slender and tall. Since the day I brought him home when he was 9 weeks old, he has been go go go. He loves to play, chase things and run. He is very obedient though, which is a plus. I take him to the dog park a few times every week to socialize him. He is very good around other dogs and people. His guarding instincts are also good. He will bark if anyone is around the house/knocking at the door. He is a little bit timid around new people but warms up pretty quick. He is good around other dogs/people. He knows many tricks and obeys them 90% of the time. When I leave the house I don't have to put him in a cage, he never got into the trash or chewed on anything he's not supposed to."

The Chow Shepherd is not a purebred dog. It is a cross between the Chow Chow and the German Shepherd. The best way to determine the temperament of a mixed breed is to look up all breeds in the cross and know you can get any combination of any of the characteristics found in either breed. Not all of these designer hybrid dogs being bred are 50% purebred to 50% purebred. It is very common for breeders to breed multi-generation crosses. 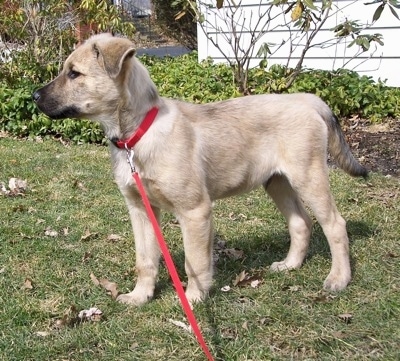 Louie the Chow Shepherd as a puppy at 3 months old out in the yard. 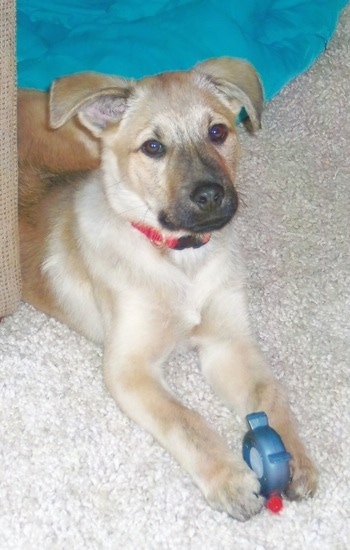 Louie the Chow Shepherd as a puppy at 3 months old with his toy. 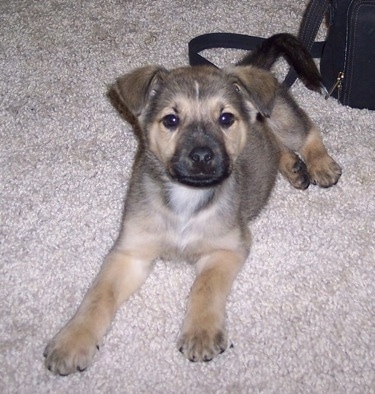 Louie the Chow Shepherd as a puppy at 9 weeks old 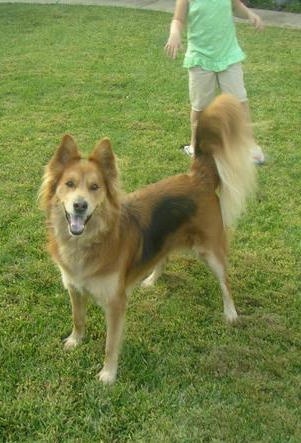 "This is Lilly my German Shepherd / Chow Chow mix at 4 years old. She also has a purple spotted tongue you can't see. I adopted her when she was a year old. She is a wonderful dog. She is very loyal to me. If I ran through fire she would do it to. She loves my family as well but when she sees me its like she hasn't seen me in forever. She is highly intelligent. I can tell her to stay and not to run the street without her moving till I say come. She will play fetch but only for a bit. When she hears a noise from over the fence she waits to see what I will do. If I say no she will do nothing and if I say, "Lilly whats that?" Then she will run and pace the wall barking. She prefers to follow me then anyone else. She is not an aggressive dog but rather a defensive dog. I have known her to mistreat a sign and snap, but not to bite, to warn. She will happily curl up in my pillow but when I start crawling in bed she gets out and on the floor into her bed. When she is out side alone she will never bark unless someone is over the fence but if I yell her name once she will stop barking. She never barks in the house. Unless she is in my room and hears a different voice in the house but I can either say stop or let her out to run to the stranger just to smell but she really could care less about the person. She hates being smothered by strangers only my family and I and a couple friends. She hates when strangers stand close behind her. She doesn't mind dogs as long as they are smaller then her. She hates when a dog is over the fence. A Boxer came on our property once and she attacked it. NOT GOOD. I broke it up very fast I am aware of the danger, (I am a vet tech). She follows me everywhere. She loves my family but when I'm there she will only listen to me. I don't walk her on a leash because she will follow me anywhere. She will run back and forth barking and growling. And doesn't like strangers coming in the back yard. (Learned that the hard way with the gardeners).

We have a game I chase her and she maneuvers around the trees but I stop and run she will run and bite my hands or shorts or shirts and bark and growl but if I turn around and chase her she will freak and run then crouch and let off a good bark, but once I say Lilly no more she will immediately stop and come to me so I can kiss her. When I feed her I put the food in front of her but she will not eat until she sits and I shake her paw. She will drop a treat out of her mouth if I tell her to. She is very loyal to me, she knows I love her and I adopted her. She is my baby " 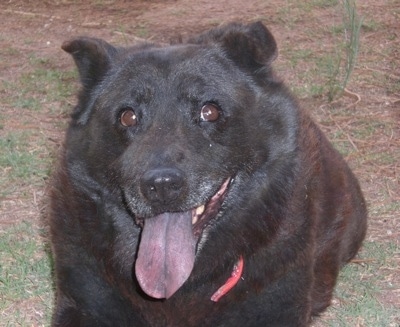 "This is Negra, a Chow / German Shepherd mix at 14 years old showing off his black tongue" 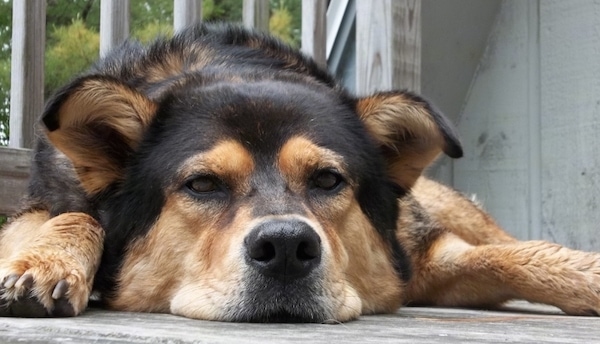 Lady ThunderPaw the Chow Chow / German Shepherd mix breed dog at 12 years old—"Lady was a rescue from a NYC dog pound on Valentines Day. She was probably 2 years old at that time so I am guessing she is around 13 now. She was very energetic, smart, wouldn't eat from her bowl until given permission, loved being with my grandchildren and me always. Her worst habit as I discovered early on was being aggressive to other dogs which probably was a result from her long term confinement at the pound. Now at her age she is arthritic and moves pretty slow... I feed her an excellent diet and walk her twice daily to maintain muscle and keep her mobile. We are bonded as much as any human and dog could ever be in this life. She is the best and I pray every day that I can be the person she thinks I am." 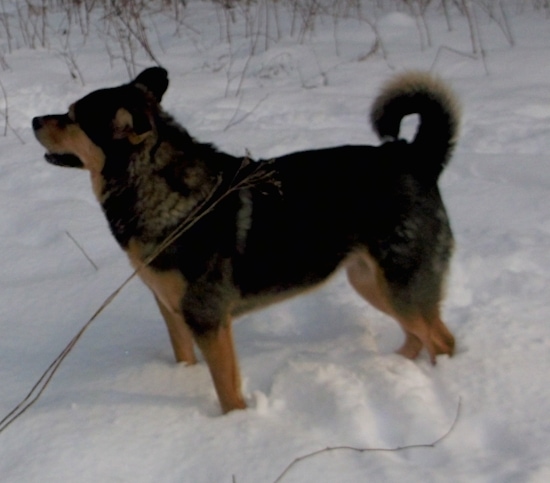 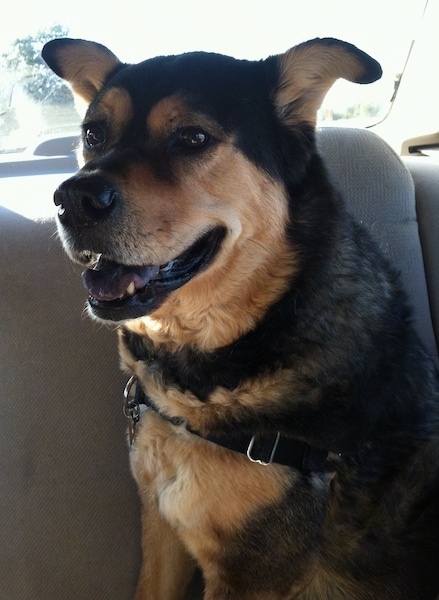 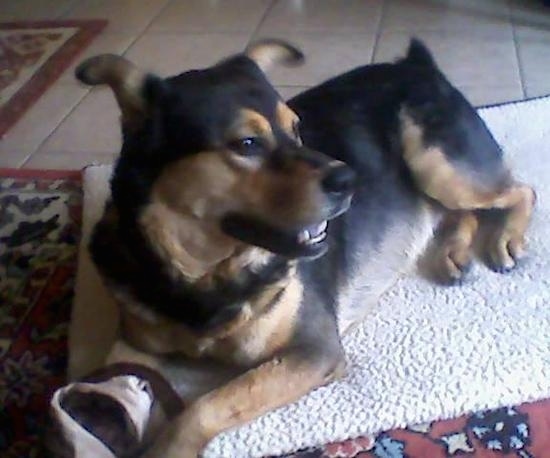