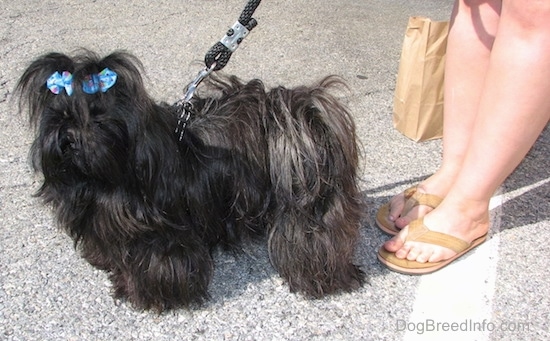 The Chinese Imperial Dog looks like a miniature version of the Shih Tzu. It's facial expression is sweet, wide-eyed and innocent. It is a compact, well-boned and muscled dog with substance appropriate to its size. It is a small, sturdy dog with a body that is slightly longer than it is tall. The head is round and broad, and wide between the eyes. The square muzzle is short, with an inch or less from the tip of the nose to the defined stop. The nose is broad, with well-open nostrils. Nose, lips and eye rims are liver on liver colored dogs, blue on blue dogs and black on all other colors. The teeth meet in a level or under bite. The large, round eyes are dark in color, but lighter on blue and liver dogs. The large, pendant, low-set ears hang down and are covered in abundant hair. The back is level. The muscular legs are straight and well-boned. The high-set tail is carried over the back and is covered in abundant hair. Dewclaws are sometimes removed. The double coat is dense and long, flowing down over the dog. The hair above the eyes is often tied in a topknot. There is a profuse beard and mustache and the hair on the muzzle is short. Coat comes in all colors.

The purpose of the Chinese Imperial Dog is to be a personal and family pet and companion. They are sturdy, happy, playful little dogs with an affectionate and loving temperament that is ideal for their role in life. They are intelligent, outgoing, trusting and energetic dogs that will also be content to sit quietly on a lap for as long as it is allowed. They are vivacious and cooperative with a streak of independence. The Chinese Imperial Dog is playful and energetic. They need daily pack walks to burn mental and physical energy. Make sure you are this dog's firm, confident, consistent pack leader to avoid Small Dog Syndrome, human induced behavior problems. Always remember, dogs are canines, not humans. Be sure to meet their natural instincts as animals.

Hypoglycemia due to their small size. Prone to slipped stifle and spinal disc disease caused by a long back and short legs. Also ear infections, eye problems such as cherry eye and early tooth loss. Tends to wheeze and snore and can have respiratory problems. These dogs gain weight easily and should not be overfed.

The Chinese Imperial Dog is a true companion. It does well in any indoor home and is the perfect size for an apartment.

Although it is tempting to carry these dainty creatures about, these are active little dogs that need a daily walk. Play will take care of a lot of their exercise needs, however, as with all breeds play will not fulfill their primal instinct to walk. Dogs that do not get to go on daily walks are more likely to display a wide array of behavior problems. They will also enjoy a good romp in a safe, open area off-lead, such as a large, fenced-in yard. Don't think that just because he is small he should be confined to a small space.

These little dogs require a good daily grooming using a bristle brush. When kept in a long coat a topknot is usually tied to keep the hair out of the dog's eyes. Some owners prefer to have them trimmed to make the coat easier and less time-consuming to care for. Keep the ear passages and area around the eyes clean. The coat can be trimmed once a month to every six weeks. If the coat is kept long it will need occasional bathing. This breed needs ear care and regular clippings. Chinese Imperial Dogs have sensitive eyes that need to be kept clean. There are special drops you can buy to put in them if needed. Ask your vet what to use on your dog. This breed sheds little to no hair and is good for allergy sufferers if its coat is kept very well groomed, due to the fact that they shed little skin dander.

The Chinese Imperial Dog or Imperial Shih Tzu is a Shih Tzu bred to be smaller than the Shih Tzu's written standard of 9 pounds. It was started some time back in the 1970s when breeders chose the runts for their breeding stock. It is still being bred today.

The Shih Tzu is said to have descended from crossing the Lhasa Apso or Tibetan mountain dog and Pekingese, in the city of Peking in the 17th century. Sixteenth century documents and paintings show dogs resembling the Shih Tzu. The dogs were favorites of the Chinese royals and were so prized that for years the Chinese refused to sell, trade, or give away any of the dogs. It was not until the 1930s that the first pair was imported to England, when it was discovered by English soldiers during World War II. The Shih Tzu was recognized in Britain in 1946. The AKC recognized the breed in 1969. The name "Imperial Shih Tzu" or "Tiny Teacup Shih Tzu" is often used to describe a smaller sized Shih Tzu, bred smaller than the written standard. Often called a princess type. 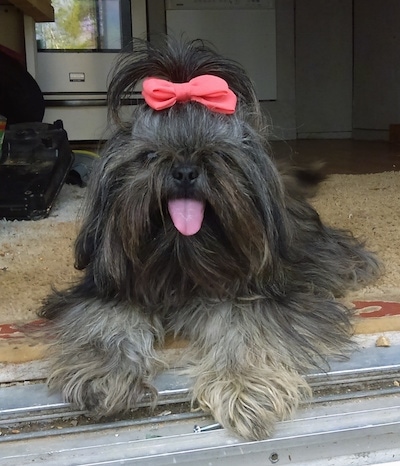 "Here's Izzy at 9 months old and full grown. She weighs 4 1/2 pounds. Her coat is thick and beautiful!" 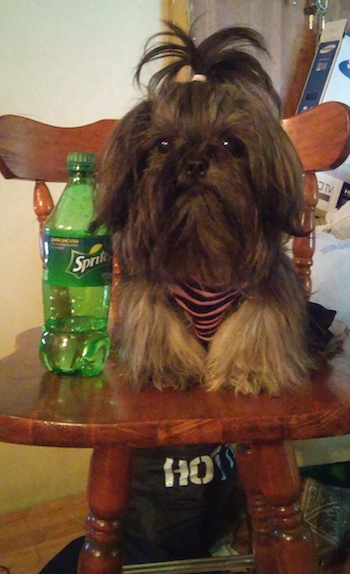 "Izzy Bitsy Roberts the Chinese Imperial Dog at 9 months old weighing 4 1/2 pounds, pictured sitting next to a 20oz bottle as a size comparison!" 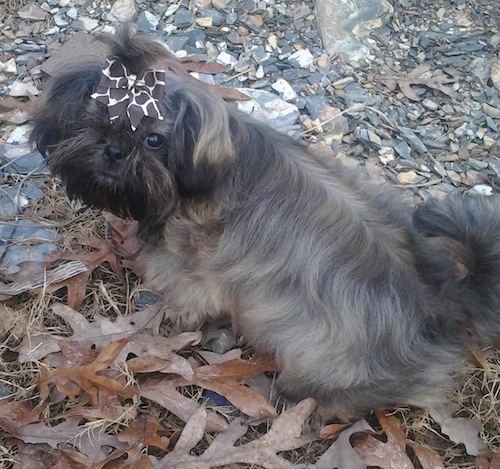 Izzy Bitsy Roberts the Chinese Imperial Dog at 5 months old—"Izzy is a blue brindle puppy. As you can see in the pictures (below), birth coloring can be misleading! She also has "agouti" coloring shown as red tips. In this picture she is 5 months old and weighs 3 pounds. She has no health issues. She is extremely smart and loving. Her coat has a slight wave but as it grows longer, the wave gets smaller. Her coat is beautiful and an perfect example!!!" 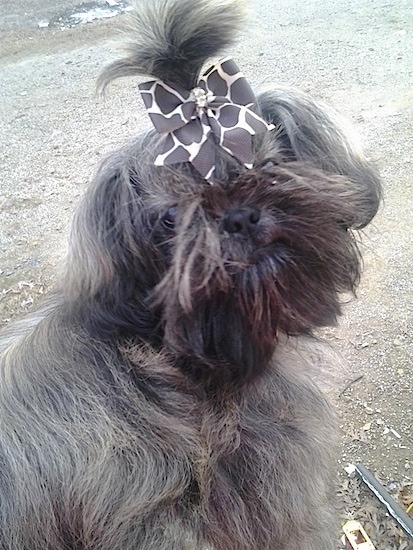 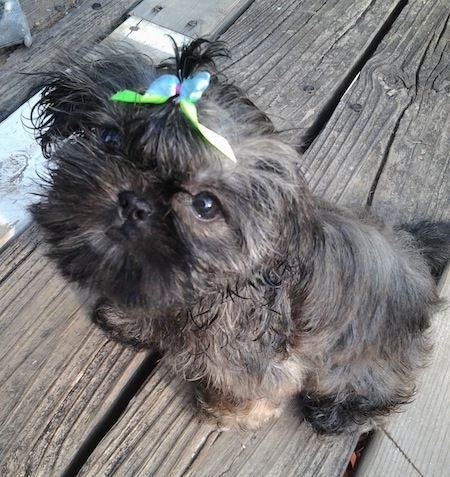 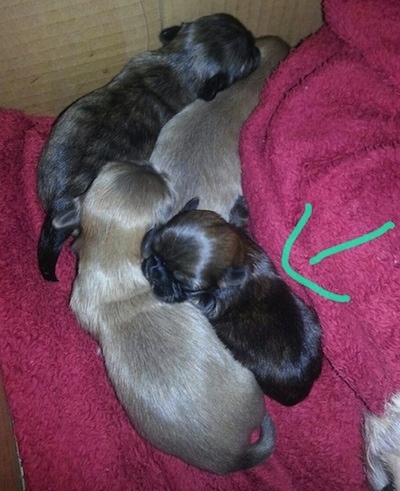 Izzy Bitsy Roberts the Chinese Imperial Dog as a newborn puppy with her littermates. 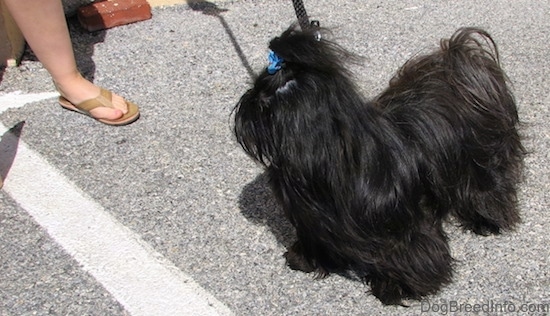 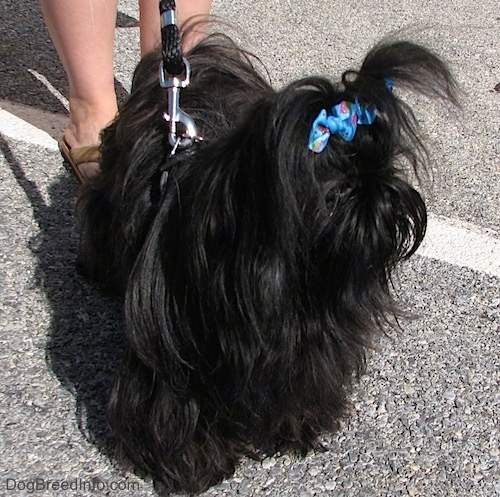 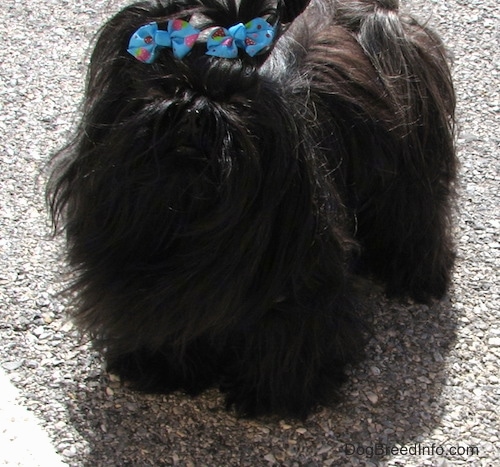 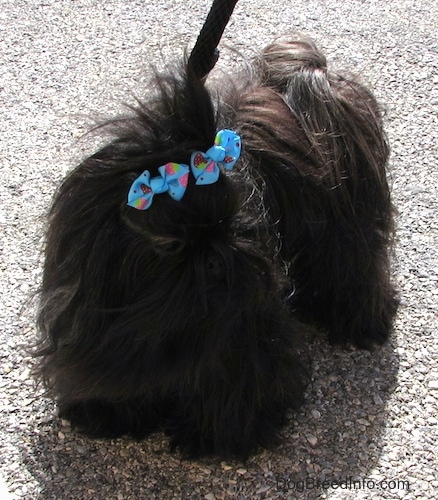 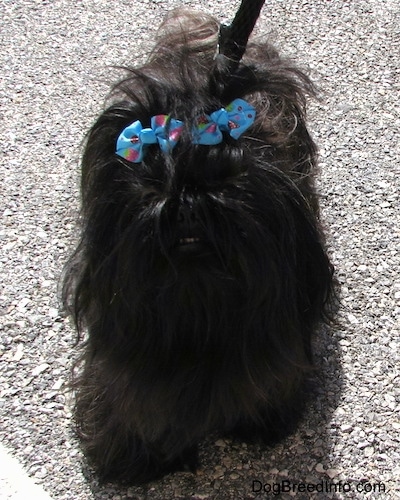 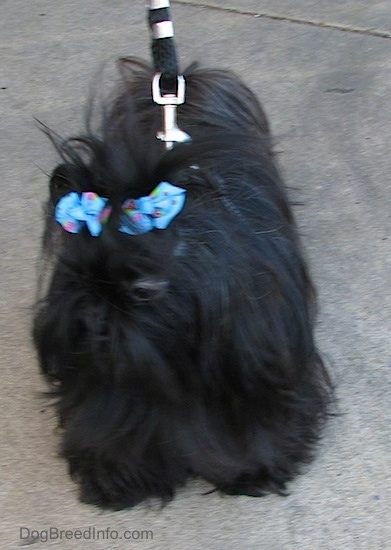 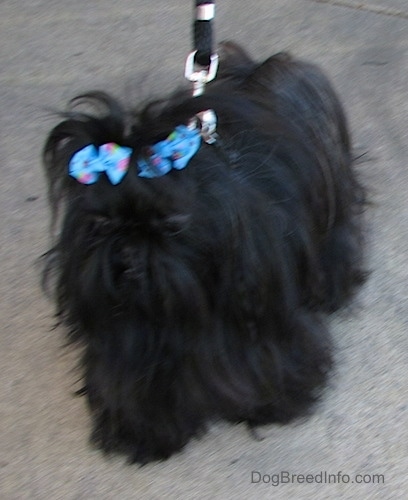 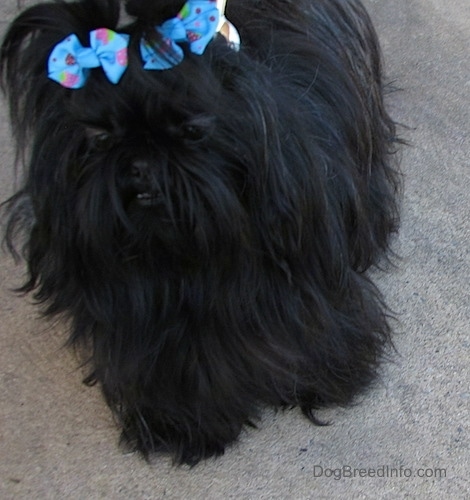 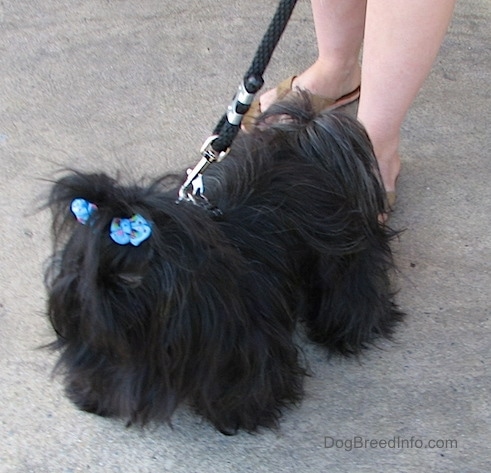 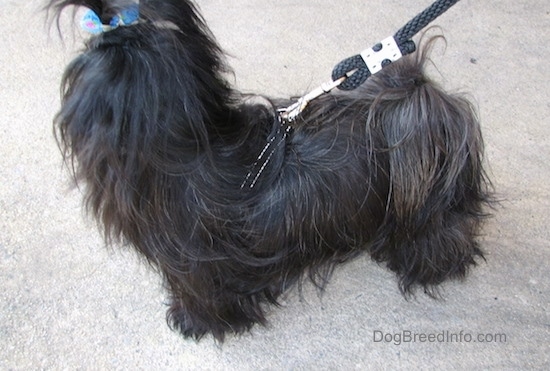 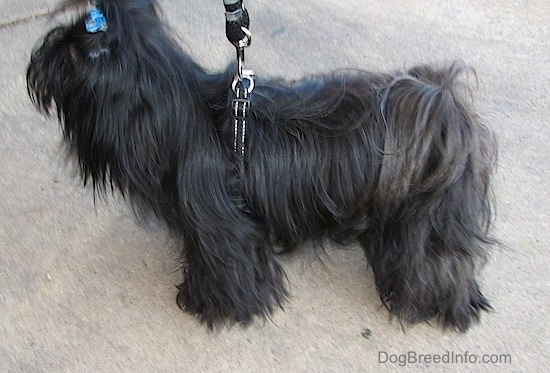