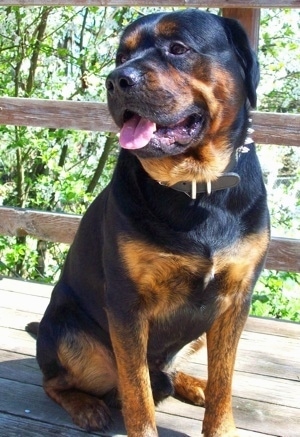 Prince the English Mastweiler at 3 years and 6 months old—"He weighs over 100 pounds, but I think he's finally about done growing. Prince spends most of his days keeping me company and chasing around my 2-year-old niece, who insists that Prince is her dog."

The English Mastweiler is not a purebred dog. It is a cross between the Mastiff and the Rottweiler. The best way to determine the temperament of a mixed breed is to look up all breeds in the cross and know you can get any combination of any of the characteristics found in either breed. Not all of these designer hybrid dogs being bred are 50% purebred to 50% purebred. It is very common for breeders to breed multi-generation crosses. 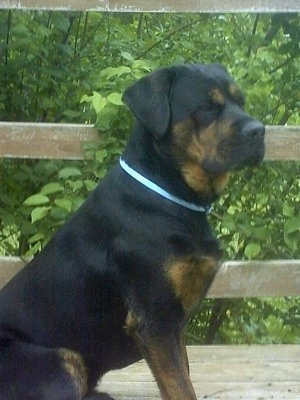 "Prince is a 90-lb. English Mastiff / Rottweiler mix. He's about 2 years old in this picture and he loves to go camping and to go on trips to the river with me and my family. He's the perfect combination of sweet-natured dog and fearless protector." 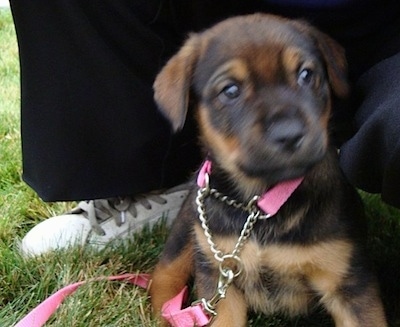 "This is Aries. She is an English Mastweiler and these are photos that I took of her at 2 1/2 months. She is a laid-back and curious little girl that loves to just be with her people. She has moments when one would think that she could never sit still, creating a race track out of the house and a launching pad of the couch, however these times pass quite quickly and last only a minute or two, not to mention that they become less and less frequent as Aries grows and learns. She is a patient and loving pup toward our 17-month-old son and has found out where the cookie crumbles, following him all over the house cleaning up after him. Aries is a food driven dog, though she loves her toys also; she is not a possessive dog when it comes to either toys or food. I have found that Aries, though stubborn, is a quick learner and that she reacts well to a calm and confident master. She loves to go on walks with the family and gets along well with other dogs. Thanks to puppy daycare her social skill are coming along wonderfully. We've still got some work to do with her but overall Aires is a well-balanced dog that fits in great with the family." 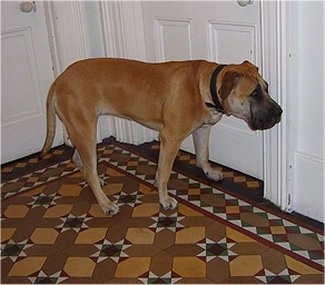 Racket the Mastiff x Rottweiler mix breed dog (English Mastweiler) at 2 years old— "Racket came from a carefully planned breeding program. A group of breeders in Birmingham, UK, were breeding dogs for army, police and security work. I think this was their third generation of puppies from English Mastiff x Rottweiler breeding. The Rotties were small, German-bred and highly-trained. Racket is third- or fourth-generation cross as far as I can gather; the breeder had quite good records and showed me photos of family members who were not present at his kennels. Their aim was to breed a dog which looked like a small Mastiff but was more suited to working life, both from a health and temperament viewpoint. There is one Neapolitan Mastiff in her background—a great-grandfather I believe, or perhaps a great great-grandfather—and he would have been used instead of an English Mastiff. The breeder described them as 'Mastiff x Rottweiler' for this reason, but I confirmed with him that all other Mastiffs used were English mastiffs, not Bullmastiffs etc. Her mother and father were both Mastweilers, and one grandfather was a Rottie. The breeders were trying to maintain a 50:50 mix down the generations. They had standardized the colors—the pups were all coming out in dark brindle, fawn or red—and the type seemed to be very similar too, but there was quite a size discrepancy in the litter; all pups appeared healthy but, out of about 12 pups, two males were much larger than the others."

"Despite her tough background, Racket is a lovely girl. She is very soppy and, aged 2, still thinks she is an adorable puppy. She's an attention-seeker, desperate to please, adores children. She is very friendly when introduced to people, but is an alert alarm dog. She is protective of me and stands in front of me, hackles raised, if she thinks there is a threat. If she hears angry, raised voices then she becomes alert and starts to guard. She has been raised with our English Bull Terrier and they adore each other, although they do enjoy rough play too. She stands about 25" (64 cm) high at the shoulder and weighs over 110 lbs. (50 kg)." 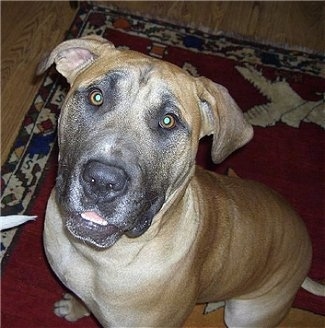 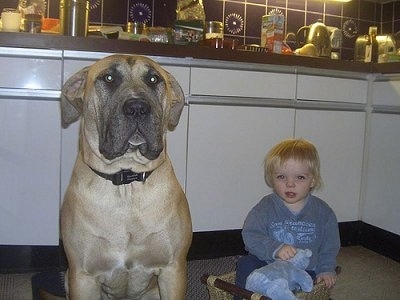 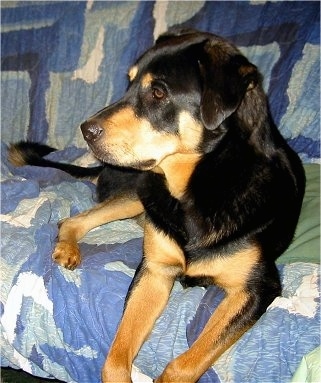 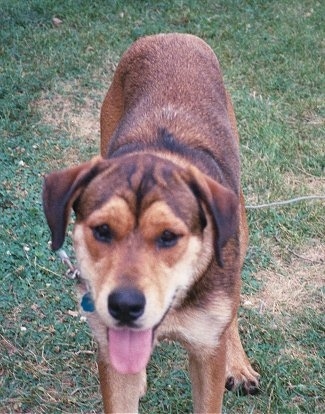 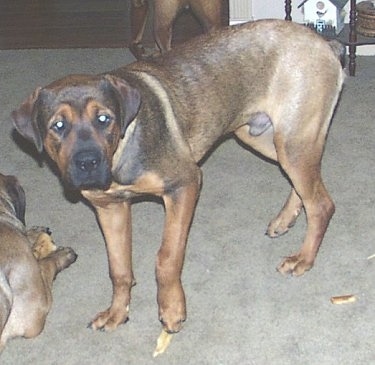 Napoleon the English Mastweiler at 8 months old is bred from from a Mastiff female and a Rottweiler male. 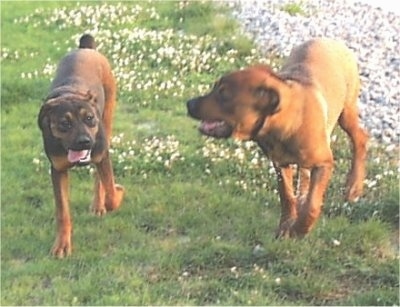 English Mastweilers Jazzy (left), and Napoleon (right) at 6 months old are bred from from Mastiff female and a Rottweiler male. 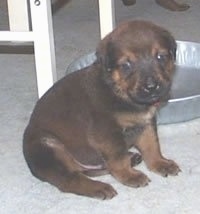 English Mastweiler puppy at 5 weeks old— "With most of these puppies we find they are laid-back like a Mastiff, but love to get up and romp like a Rottweiler. These puppies are from a Mastiff female and a Rottweiler male."