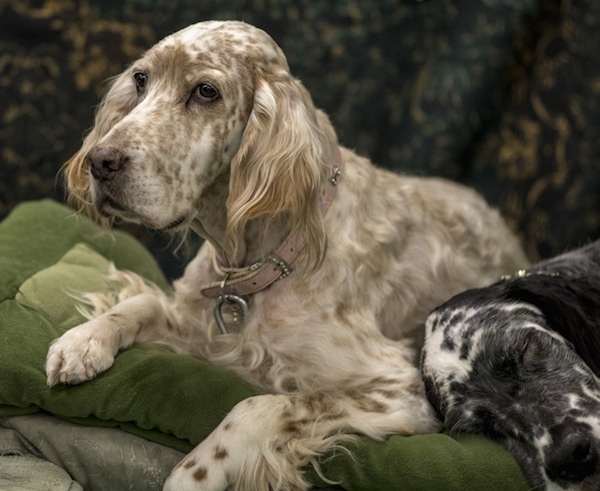 The English Setter is a beautiful, long and lean, working gundog. The skull is oval in shape when viewed from above. The muzzle is long and square with a defined stop. The nose has wide nostrils and is either brown or black in color. The teeth meet in a level or scissors bite. The large, round eyes are dark brown. The ears are set back and low, hanging down even with eye level, covered with silky hair. The large eyes are hazel in color. The chest is deep, but not too wide or round. The tail starts at the topline, thicker at the base tapering to a point with straight, silky feathering. Dewclaws are sometimes removed. The coat is flat, silky and wavy, with feathering on the tail, back of the legs, underside, abdomen, chest and the ears. Coat colors include white with blue, lemon, orange, or brown of various markings. The speckling on the unique coat can be light to heavy and of any size. Some dogs are tricolor (blue, white and brown).

The English Setter is a quick, quiet worker with an excellent nose and a coat that keeps the dog comfortable in both hot and cold weather. A very gentle, calm dog. Friendly and excellent with children, they are easy going, loving all the affection they can get. Exuberant and vivacious outdoors, but relatively inactive indoors. With meek owners they will become willful. Can be difficult to housebreak. Rules, structure and training should start early to prevent development of bad habits. They need authoritative, calm, but firm, confident and consistent owners, but should never be harshly treated. They are sensitive to the tone of one's voice and will not listen if they sense that they are stronger minded than their owner, however they will also not respond well to harsh discipline. Owners need to be calm, yet possess an air of natural authority. Need a lot of structure and enjoy playing with other dogs. English Setters are adequate watchdogs. They like to roam, dig and are good jumpers. There are two types, field lines and show lines (bench). Field types are bred for hunting and field trial work and are generally somewhat smaller and lighter. The bench type is bred for conformation shows. Both types are energetic and need daily exercise, but field lines have a higher energy level and need even more exercise. The dominancy level in this breed varies even within the same litter. If you are not the type of person who can display a natural air of calm, but firm authority, then be sure to choose a pup that is more submissive. The temperament of both show and field lines vary widely, depending upon how the owners treat the dog and how much and what type of exercise they provide. The English Setter can become a nuisance barker if left out in the backyard for long periods of time and if owners do not provide enough mental and physical stimulation and/or leadership. Dogs that bark a lot need to be told this is not acceptable and need their bodies and minds challenged. Some English Setters may be light droolers, although not obsessively like some of the Mastiff type dogs.

Prone to hip dysplasia. Be careful not to overfeed this breed, for they tend to gain weight easily. English Setter females are prone to false pregnancies. Prone to mast cell tumors.

Not recommended for apartment living and does best with at least an average-sized yard.

All setters need a daily long, brisk walk or jog, where the dog is made to heel beside the human holding the lead, or they will become restless and difficult to manage. Whether we humans realize it or not, a dog that is allowed to walk ahead of the human holding the lead will instinctually believe he is pack leader to humans, as in a dog’s mind, the leader leads the way. In addition, they will also enjoy running free in the safety of a fenced yard.

Regular combing and brushing of the soft, flat, medium-length coat is all that is required to keep it in excellent condition. It is important to check for burrs and tangles, and to give extra care when the dog is shedding. Bathe or dry shampoo only when necessary. Trim the hair on the bottom of the feet and clip the nails. This breed is an average shedder.

The first strains of setters were developed in France in 1500, obtained from the Spanish pointer and the French pointer. These early setters were called "Setting Spaniels," named after the way they would crouch down after finding the pray to allow the hunter to throw a net over it. In the early 1800s they were brought to Great Britain where a breeder named Sir Edward Laverack developed them into the English Setter we know today using early French hunting dogs. He bred out the trait of crouching down more to an almost sitting stance, so the dogs would be easier seen by the hunters who now had guns. The English Setter is often called the Laverack Setter. The word "setter" comes from the way the dogs appear to almost be sitting down when they discover game. Laverack's dogs are the foundation stock for many of today's top show dogs. The Llewellin Setter was bred out of English Setter lines by an English breeder named Llewellin. The English Setter's talents include hunting, tracking, retrieving, pointing, watchdog and agility. 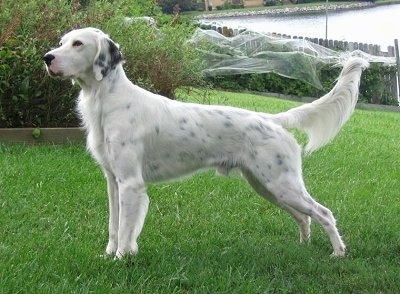 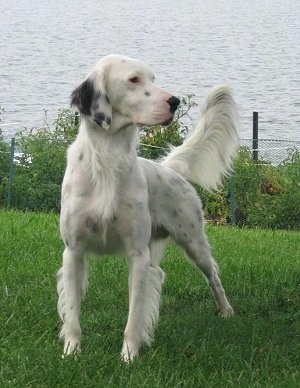 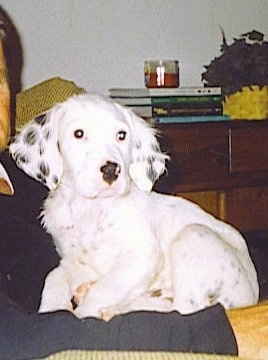 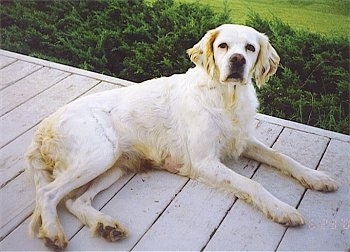 Lemon and white Setter named Hall's Becky Sue at age 11; a couch potato at home, but an awesome birddog. 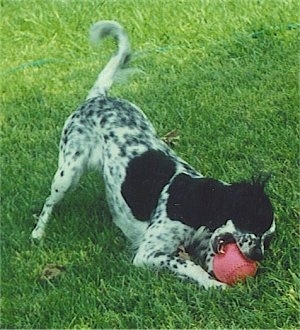 "Black and white Setter named Hall's Southern Belle at age 5—she is Becky Sue's daughter, and a ball of energy and a pup at heart, also a great birddog. The two really work as a team in the field. If one is on point and the other notices, she'll snap up and point in the direction of her partner." 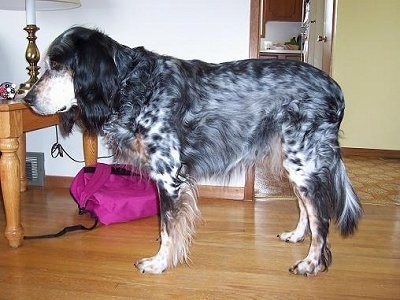