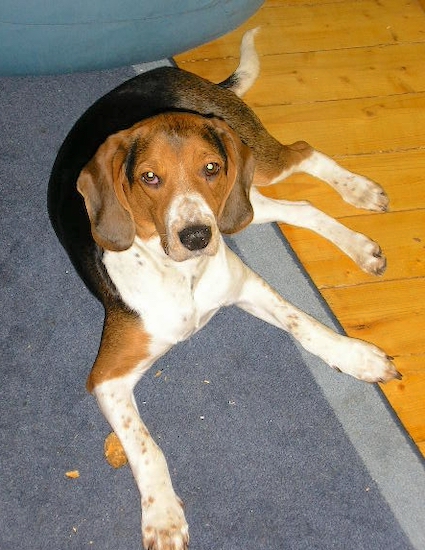 The Estonian Hound is a medium-size dog with a strong muscular body, strong bone structure and well-developed muscles. It has tight skin without folds and drop ears. The coat is short, evenly rough and shiny. The undercoat is weakly developed. The tail is covered in its full length with even, thick hair and thus might seem a bit thick. Closer to the end of the tail the hair becomes shorter. The eyes are dark brown and the corners of the eyelids are dark. The Estonian Hound usually has black patches (limited with tan colors). The size of the patches is unlimited. Also allowed are a blackish brown color, red patches and a saddle-like patch on the back. The tip of the tail has to be white.

The Estonian Hound is always happy and pleasant. It is balanced, calm and smart with an active temperament. It is friendly and should never be aggressive, but needs to be well socialized and exposed to new things to prevent it from being a bit timid of new situations. It is good with other dogs and usually good with cats if raised and socialized with them. It loves human attention, but make sure you are 100% pack leader to prevent it from getting upset when left alone. Proper human to canine communication is essential. Affectionate, it will love to snuggle up with its owners while watching TV. It has inherited from its predecessors such characteristics that make it very easy to teach it to not hunt hoofed animals as it is only allowed to hunt hare and fox in Estonia. The Estonian Hound has a beautiful voice when it hunts. A joy to hunters’ ears!

The Estonian Hound is relatively inactive indoors if exercised sufficiently. It is best suited for a house with at least an average size yard.

Estonian Hounds need lots of exercise (at least one 1.5-hour long walk a day), where the dog is made to heel beside or behind the human holding the lead, as instinct tells a dog the leader leads the way, and that leader needs to be the human. The Estonian Hound is an energetic working dog with enormous stamina. An Estonian Hound will love a long walk in the forest, if you have a safe area to do this, where it can run around. The Estonian Hound likes to follow its nose and is sometimes difficult to control when it picks up a scent and has taken up a lead. Take caution when exercising this breed around cars. Always use a lead in unsafe areas.

The short, rough coat is easy to groom. Bathe only when necessary. This breed is an average shedder.

The Estonian Hound is the only dog breed developed in Estonia and therefore you may say that an Estonian Hound is the Estonian national breed. Until 1914 mainly so-called Russian-Polish Hounds and English Fox Hounds were used for hunting in Estonia. Their mixes formed local hounds. In the 1920s Finnish Hounds were brought to Estonia and the looks and work of these dogs also changed the local dogs. A law was issued on July 1, 1934, which gave a push for the breeding of an Estonian Hound. The law forbids hunting with dogs that were higher than 17 inches (45 cm.). At that time all the game was hunted with hounds. By 1934 the numbers of game had catastrophically declined and with issuing the law the government tried to avoid over hunting. Forests in Estonia are well organized even these days and hunters don't need big fast hounds. To form a suitable dog breed Beagles, Swiss Hounds (Gewvhnlicher Schweizer Laufhund), Luzern Hounds (Luzerner Laufhund) and Bern Hounds (Dreifarbiger Berner Laufhund) were brought in. Mixes of local hounds with Beagles and Swiss Hounds were the ones that met all the requirements of the desired hound breed. The influence of these breeds still shows today and has helped to develop a base from which a current Estonian Hound has formed. On December 27, 1954 the Main Government of National Parks and Hunting Economy of the Agriculture Ministry of the Soviet Union approved the Estonian Hound standard. After regaining independence the Estonian Kennel Union approved the breed standard on July 4, 1998 and is now working on the recognition of the breed by FCI. 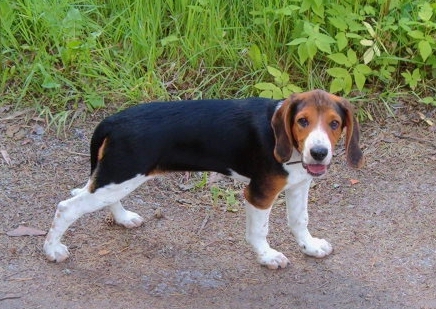 Nike the Estonian Hound as a puppy at 4 months old 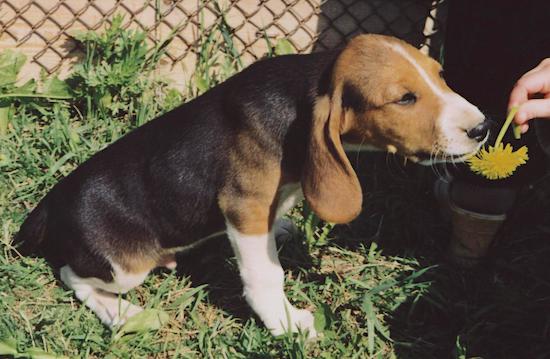 Oscar the Estonian Hound as a puppy at 2 months smelling a dandelion flower. 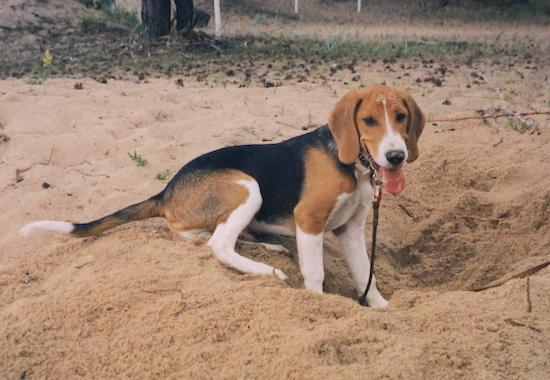 Oscar the Estonian Hound as a puppy at 6 months old digging a hole in the sand.