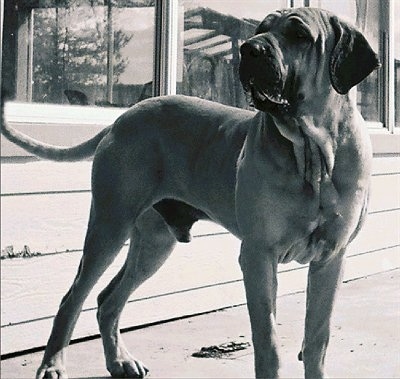 Buffy the Fila at 1½years old—his owner says, "He is everything I just read here on this site about Filas. He absolutely adores my kids and even a few of their friends. But only the friends that were around him before he turned about 8 months old. He weighs about 170 lbs. and is fawn colored. He is the ultimate guard dog. Very few people get near our home. He loves to sleep in the house, but we had to boot him outside because he snores so loud. Even the kids upstairs couldn't sleep with him asleep downstairs."

The Fila is well boned with a rectangular structure. Its Bloodhound ancestry is apparent in its long muzzle, pendulous skin, and superb tracking ability. Its muzzle is heavy with pendulous upper lips giving it a Mastiff appearance. Its neck is very thick, with dewlap. The skin is of the most important breed characteristics. It is thick and loose all over the body, chiefly at the neck, forming pronounced dewlaps, and in many individuals the folds proceed to the chest and abdomen. Some dogs show a fold at the side of the head and also at the withers descending to the shoulders. The coat is short, smooth, dense and soft. This breed may be any color, solid or brindle, except white, mouse gray, patched, dappled, or black and tan. The typical colors are fawn, black and brindle. Brindles of a basic color may have the stripes of either less or with very strong intensity. A black mask may or may not be present. In all permitted colors white markings should be limited to the feet, chest and tip of tail. The white markings are not desirable on any other part of the body. The back is strong and straight rising gently toward the hindquarters. Its gait is measured and elastic, like that of a cat. His main characteristic is the pace (camel’s gait), moving two legs of one side first, followed by the two legs of the other side, which causes a rolling lateral movement on the thorax and hindquarters accentuated by the tail when it’s raised. During the walk he maintains the head lower than the back line. This fascinating carriage has earned it great success in dog shows. General Appearance: A typical molossoid breed with powerful bone structure, rectangular and compact figure, but harmonious and proportional. Added to his massiveness, a great agility can be easily seen. Females must show a well-defined femininity, which differentiates them immediately from males.

The Fila Brasileiro is a courageous, powerful mastiff. It is amenable with its human family, making a very loyal loving companion. Extremely dedicated to his owner. A Fila will protect you without a moment’s hesitation. He feels that is why he is there. Once you bond with your Fila, you and your family will become his whole world. You do not teach your Fila to protect you, as he does this on his own. It is the breed’s nature to be loyal and protective of his family. They love kids in their own family and take a lot of abuse from them. Ask anyone who has kids and Filas and they will tell you how unbelievably gentle they are with the children in the family. Filas make great family pets and are gentle, loving, loyal and very protective. They will also bond with other pets in your home. Outstanding courage, determination and bravery are part of his characteristics. He is docile and obedient to his owners and family and extremely tolerant with children in his own family. His faithfulness became a Brazilian proverb. He is always looking for the company of his master. He shows a calm disposition, self-assurance and self-confidence, not being disturbed by strange noises nor when facing a new environment. An unsurpassed guardian of property, he is also inclined, by instinct, to hunt big game and to herd cattle. Some Filas may drool, especially after getting a drink. Bold and wary with strangers, this breed makes a wonderful guard dog. It needs a dominant owner who understands the alpha pack instinct. Proper socialization and understanding of the breeds instincts are the keys to successful ownership of a Fila. Do not allow this breed to take over. He needs a handler who displays natural authority. Be firm, confident and consistent. Passive owners will encounter dominance issues. The objective in training this dog is to achieve pack leader status. It is a natural instinct for a dog to have an order in its pack. When we humans live with dogs, we become their pack. The entire pack cooperates under a single leader. Lines are clearly defined and rules are set. You as the human MUST be higher up in the order than the dog. A dog with the massive size and strength of the Fila that believes he is alpha to humans is downright dangerous.

A lot of Fila fanciers recommend stopping all socialization at age 4 months. When a canine puppy’s socialization stops at such a young age it molds its temperament into an anti-social dog. This is the end goal for many Fila owners as it is the breed’s trademark, so to speak. It is what is called ""Ojeriza" to strangers," which means the distrust of strangers. A lot of owners, however, have been choosing to socialize the Fila throughout its life. Socializing a Fila Brasileiro as a puppy will not always make your Fila like people. What it will do is show your Fila that not everything is a threat. It will make him more confident and more stable in the world around him. Robin Barrett, owner of Harley Acre Filas states, "When I first got into Filas, most owners chose to have their Fila Brasileiro unsocialized and basically lunging maniacs at the end of the leash. Some people seem to need an intimidating dog at the end of a leash or behind a fence to make them feel superior. A Fila does not have to be like that to be protective of you. With good common sense and obedience training you can have a Fila by your side that will behave himself while in public and not want to kill everything that moves. By socializing your Fila and introducing him to the world around him you are doing the same thing that is needed to take a Fila into the show ring."

The Fila is NOT a breed for the average pet owner. You need to know what the Fila Brasileiro is about and what it takes to own one. If you choose to raise your Fila using the methods that produce a dog who is "Ojeriza" to strangers (distrustful of), you must decide if your lifestyle will allow a protective breed that is anti-social with strangers and decide if you have the ability to control the dog. If you have a lot of friends and relatives coming in and out of your home you may want to consider another breed. You also need a good solid fence of correct height with secure locks to keep strangers out and the Fila in.

Prone to most large-breed ailments. Beware of hip dysplasia. As these dogs are prone to bloat, feed two or three small meals a day, instead of one large one. Also prone to CHD, gastric torsion, elbow dysplasia and PRA.

This breed is not suited to city life, as its vigorous body must work off energy in the freedom of the country. It needs a fenced-in yard with room to run. The Fila can sleep outdoors with proper shelter.

The Fila needs plenty of chance to exercise. While some can appear to be very lazy, big couch potatoes, like all dogs, they should be taken on daily walks.

The smooth, shorthaired coat is easy to groom. Brush with a firm bristle brush and wipe over with a piece of toweling or chamois for a gleaming finish. Bathe or dry shampoo when necessary. This breed is an average shedder.

The Fila Brasileiro is a descendant of the 15th-century English Mastiff, Bloodhound, Bulldog and Rafeiros. From the Bloodhound, he inherited loose skin and his keen sense of smell. The Bloodhound in its bloodlines gives it superb tracking ability. The Mastiff contributed its compact body, courage and an ever-alert disposition. When the Fila finds its quarry it does not attack, but rather holds it at bay until the hunter arrives. The Bulldog added the unforgiving impetuous temperament. The Fila has the ability to track, herd and control livestock and large game. When slavery was legal in Brazil, the Fila was used to return fugitives unharmed to their slave masters. The Fila’s great tracking ability led to its presence in North America and Europe. Due to its size and potential for aggression, it is unfairly banned in some countries. 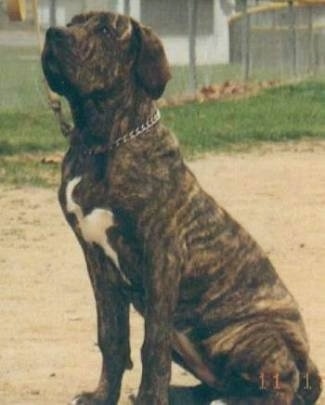 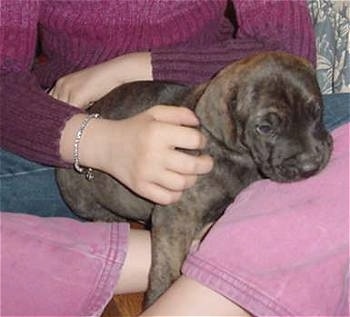 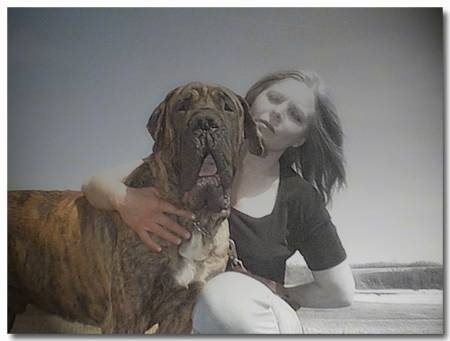 Genevieve and her beloved Hayden 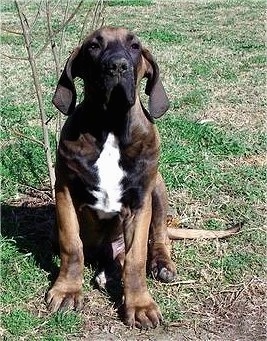 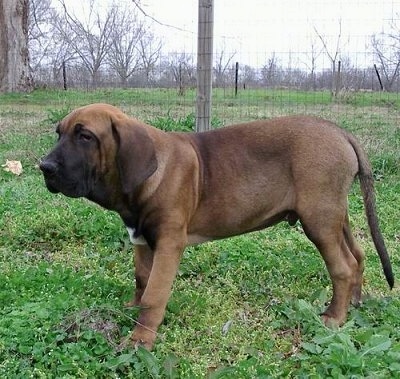 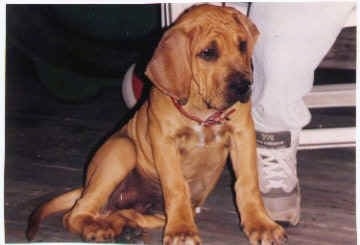 This is Tobi at about 9 weeks of age. What an adorable pup! 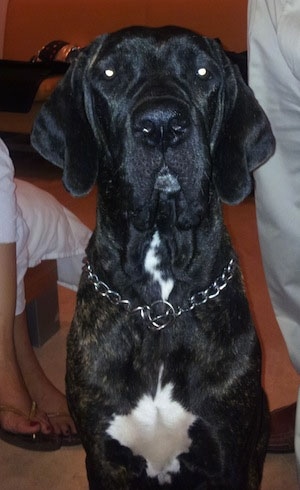 Uma the Fila Brasileiro at 1 year old— "Uma is shy and playful. She is very friendly with strangers once they are in the house." 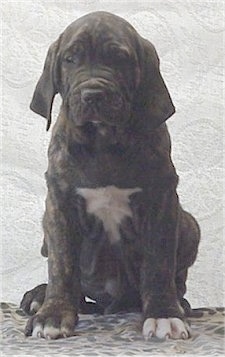