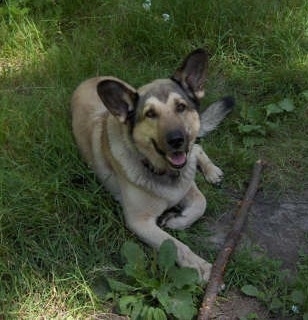 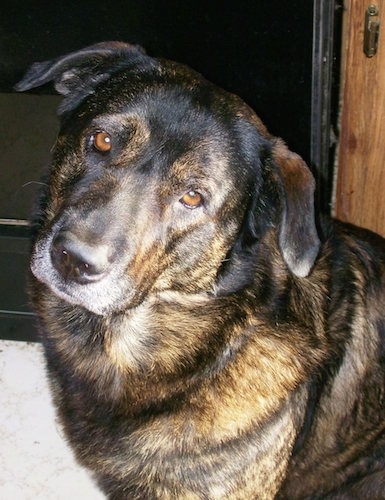 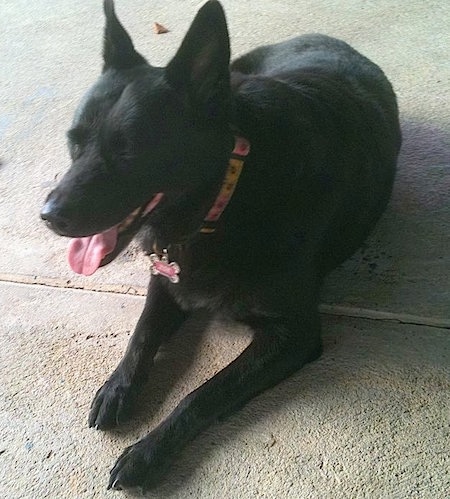 Bug the German Sheprador at 12 years old—"Bug was about as smart as they come. She understood many words and could swim, play ball and balance on a beam. She loved people and other creatures but was ready to stand her ground if necessary." 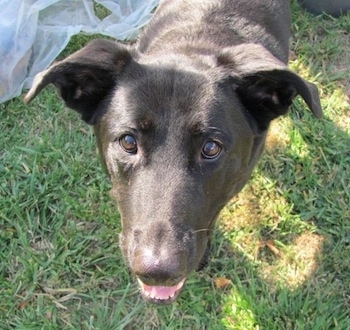 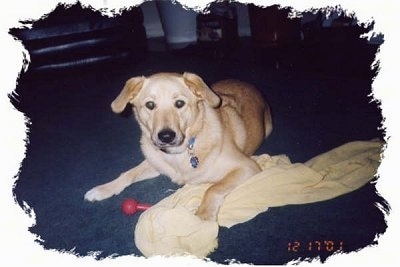 "This photo is of Teagen, our Lab / Shepherd / Unknown mix at 2 years old! Teagen is almost 7 now. He is always happy, loves everyone and will kiss you forever if you let him! We rescued Teagen from a shelter when he was 9 months old and he became an instant part of our family! Teagen is small for his mix of breeds (he weighs less than 60 lbs.) but isn't he cute?" 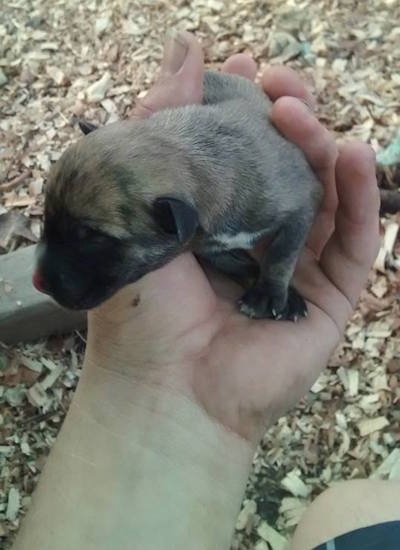 "My dog, May, is a 2 year old black Lab that bred with a German Shepherd. This is one of her newborn babies who we named March" 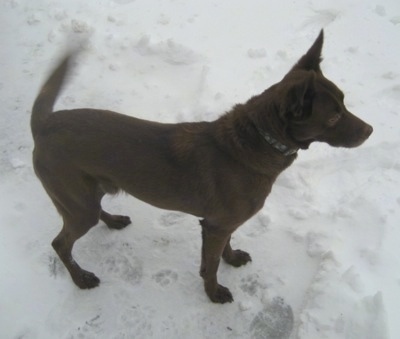 "This is Russell. He is a well-behaved 6-year-old chocolate Lab / German Shepherd mix. He rarely barks, and is GREAT with everyone. He is walked on a regular basis, and loves to play fetch. I took this picture during our rare white winter here in Virginia in the front yard. He was brought home by my wife after her visit to a girlfriend's house over the holidays. I did not know what to expect, but I have no complaints about our ol' man." 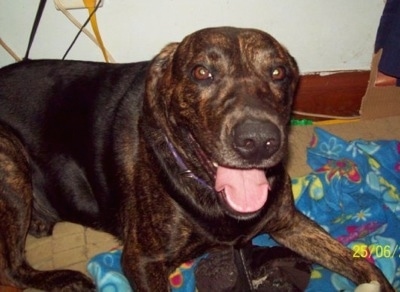 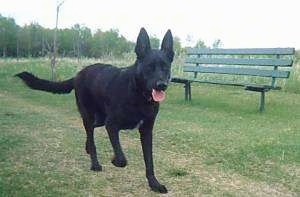 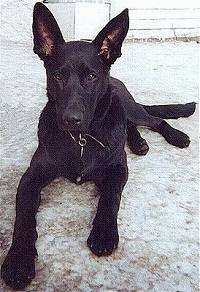 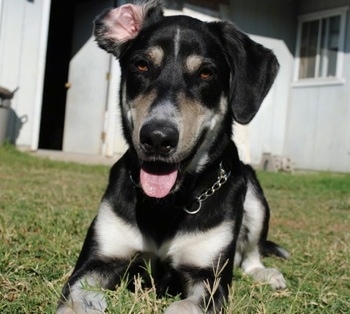 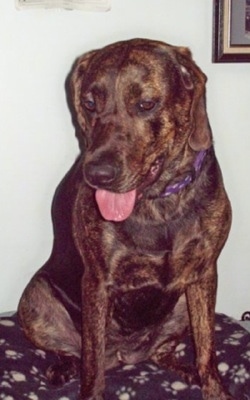 "This is my dog. She is a 4-year-old German Shepherd / Lab mix. She gets very excited to see anyone and is very lovable. She likes tearing the stuffing out of her toys before she'll play with them. Once in a while she will get into the garbage and chew things she's not supposed to." 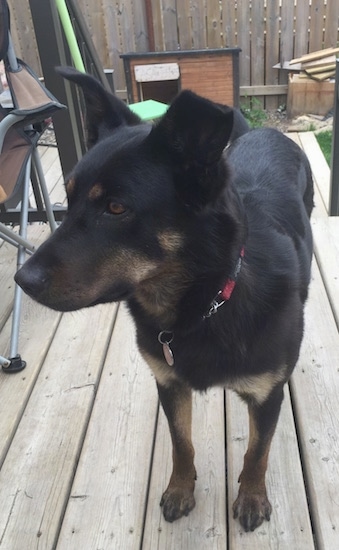 "Thena is a 4 year old Sheprador. She has an insane ball drive and as such is incredibly easy to train. She is great with other dogs and with people (including kids). Loves chasing a ball into the water and is eager to please. Her double coat requires a good brushing at least every week in the summer time, but she tends to stop shedding in winter. Not really an apartment dog. This dog will keep you busy!!" 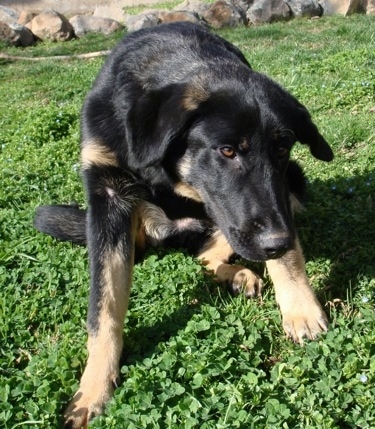 "Pictured is my dog Riley, a black Lab (mother) x German Shepherd (father), shown here at 10 months old. He weighed over 90 pounds before he was a year old. He is a total sweetheart who thinks he's a lap dog even though he lives outside. He is not high energy, but seems to prefer lying around on the porch. He is full of curiosity and loves water." 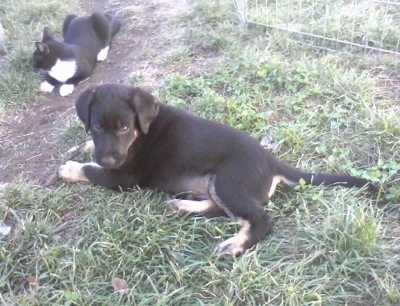 Riley the German Sheprador as a 7-week-old puppy 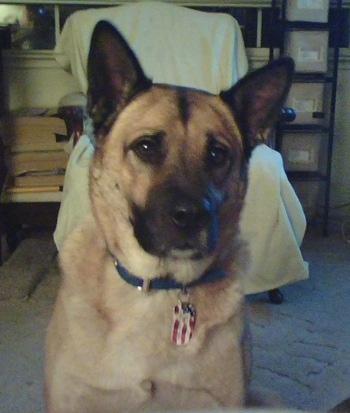 "Buddy the Lab / German Shepherd mix at 8 years old—he is very, very loving, but very protective as well. He is smart and playful, but is a great large indoor dog at the same time." 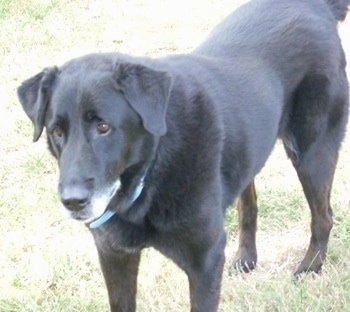 "Ace is a Black Lab / German Shepherd mix. Ace has the coat, loyalty and guarding ability of a German Shepherd, but the gentleness, energy and goofiness of a black Lab. He is 10 years old and weighs approximately 70 lbs. Ace has several acres to run on and he loves playing with his best friend Cali (a Westie / Maltese mix). Ace has the best temperament and behavior of any dog we’ve ever owned. We love our Acey boy." Banjo the German Sheprador (German Shepherd / Labrador Retriever) mix at 11 years old—"We adopted Banjo when she was 1, and now she's a very dignified old lady! Exceptionally trainable and obedient dog. Did a DNA test just for fun and confirmed she was a German Sheprador. Two of the best breeds rolled into one." 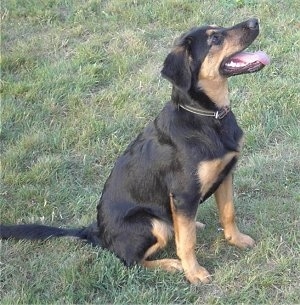 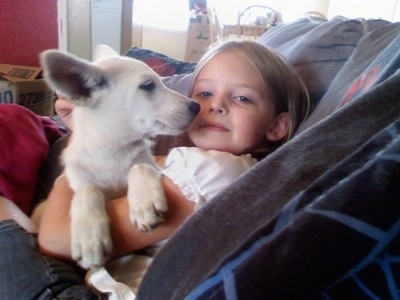 "This is Luna and our daughter Ally. Luna is an American White Shepherd / Lab mix. She was 2 months old in this picture and was already getting big! We adopted her from our local SPCA. Her and her sisters were found as babies in a dumpster. She is very peaceful and loves to lie on a blanket on the floor at my feet. As a puppy she did not like to be outside alone and peed a little when she met someone new. I look forward to seeing how beautiful both Luna and Ally become." "This is Tyson, our Lab / Shepherd mix at ten months old, rescued, our best friend. We were lucky enough to find him at a rescue league when he was eight weeks old. He brightens up our lives every day, he is a social, well-behaved, and loyal dog.... Great addition to our family!!!" Tyson the Shepherd / Lab mix as an 8-week-old puppy