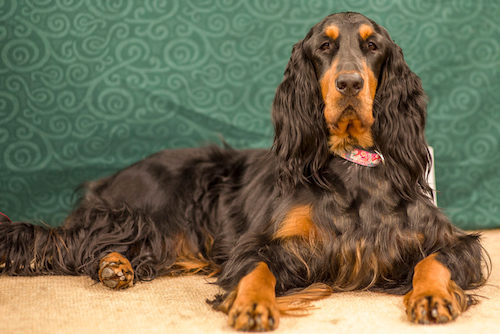 The Gordon Setter is slender, but robust in structure. The head is deep with a long muzzle. The muzzle should be about as long as the skull, with a defined stop. The black nose is broad. The teeth meet in a scissors or level bite. The oval eyes are dark brown. The long ears are set low, about level with the eyes, hanging close to the head. The topline slopes slightly from front to back. The short tail is not docked, and does not reach the hocks. Dewclaws are sometimes removed. The soft, shiny coat is either slightly wavy or straight. The hair on the ears, under the stomach, chest, the backside of the legs, and on the tail is longer than it is on the rest of the body. The feathering on the underside of the tail starts out longer at the base and get shorter as it reaches the tip, giving the appearance of a triangle. The Gordon Setter is the only setter that comes in black with tan markings. The tan markings are either rich chestnut or mahogany in color and appear over the eyes, on the sides of the muzzle, on the throat, two spots on the chest, on the legs, and on the vent. There may be a small white spot on the chest.

The Gordon Setter is distinguished both for its loyalty and obedience. It is a polite, sweet-tempered, devoted dog, making an enjoyable companion that is excellent with children. Intelligent and willing, it is a skilled hunter that is seldom wrong about a scent. Brave, cheerful and affectionate, This breed needs lots of exercise or it may become high-strung. Very loyal to the family, it can be distant with strangers. Generally good with other pets but may try to dominate if it is lacking in human leadership. Proper human to canine communication is essential. This breed likes to roam, so it is a good idea to have a fenced-in yard. Puppies may be clumsy. Train early with good leadership before bad habits set in; while not impossible, it is easier to prevent negative behaviors than it is to fix them. Training these dogs is certainly not difficult, provided the owners are firm, but calm. If they sense the owners are meek or passive they will become stubborn. This dog should be introduced to all situations (people, animals and things) as a young pup to produce a well-balanced dog. A Gordon Setter that has been introduced as a puppy to cats will get along well with them. If strangers visit, they adopt a wait-and-see attitude. In general they get along well with other dogs and with children because they are friendly to everyone.

Generally healthy, but some are prone to hip dysplasia, eye diseases such as progressive retinal atrophy (PRA) and cataracts. These dogs are prone to bloat and should be fed two or three small meals a day rather than one big one.

The Gordon Setter is not recommended for apartment life. It is relatively inactive indoors (if a Gordon Setter gets enough outdoor activity it will be calm when it is indoors) and does best with at least a large, safely fenced yard where it can run free. Their hunting instincts lure them to roam, so a good fence around your property is essential.

All setters need a daily long, brisk walk or they will become restless and difficult to manage. While out on the walk make sure the dog heels beside or behind the person holding the lead, never in front, as instinct tells a dog the leader leads the way, and that leader needs to be the human. In addition, they will also enjoy running free in the safety of a fenced yard.

Regular combing and brushing of the soft, flat, medium-length coat is all that is required to keep it in excellent condition. It is important to check for burrs and tangles, and to give extra care when the dog is shedding its coat. Bathe or dry shampoo only when necessary. Trim the hair on the bottom of the feet and keep the nails clipped. This breed is an average shedder.

The Gordon Setter was developed in Scotland in the early 17th century. This black and tan setter became popular by Duke Alexander IV of Gordon in the early 19th century. They were used as bird dogs, having an outstanding sense of smell. The dogs would point toward the fallen bird, retrieve it and bring it back to the hunter. The Gordon had great stamina and could hunt in bad weather on both land and water, but was not as fast in comparison to the pointers and as a result started to lose popularity as hunters chose other breeds. The Gordon Setter was one of the breeds that were used in the development of the Irish Setter. The Gordon makes a good one-man shooting dog. The Gordon Setter was recognized by the AKC in 1884. Some of the Gordon Setter's talents include guarding, watchdog, hunting, tracking, pointing and retrieving. 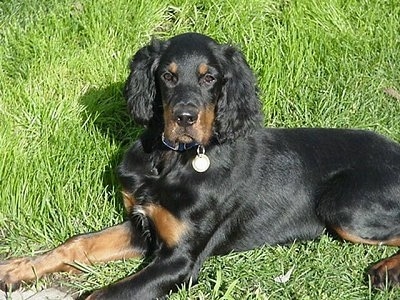 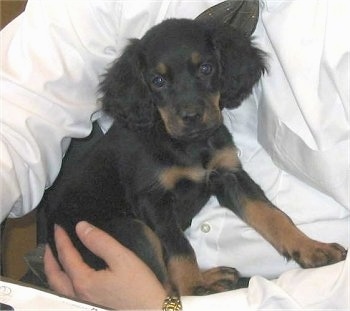 "These are photos of our Gordon Setter Crownline's Sunset Pride (Sunny). She was only 6 weeks old in the photos (she's an adult now). Not only is she beautiful, but she is incredibly intelligent. She fits the description of the breed to a T. She's highly intelligent, loving, lives to please Daddy, loves to hunt and extremely energetic. Luckily we have a large fenced-in yard for her to run out her energy. My husband built her a huge house and kennel, but he said we should've just bought her a queen-sized pillow-top bed since that's where she sleeps now! We are so blessed to have her in our life." 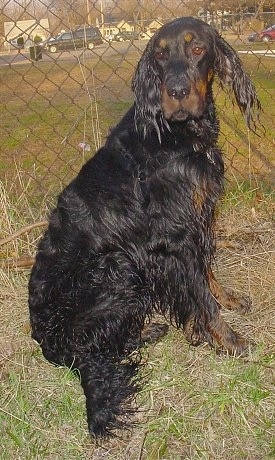 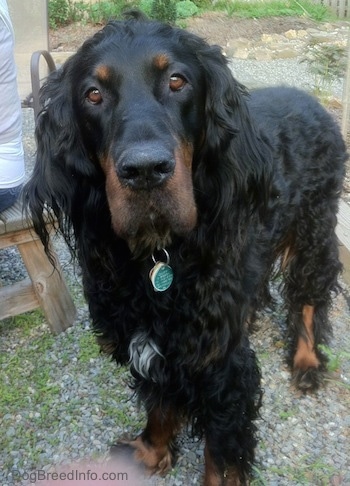 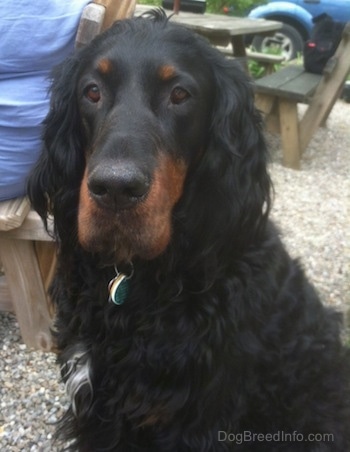 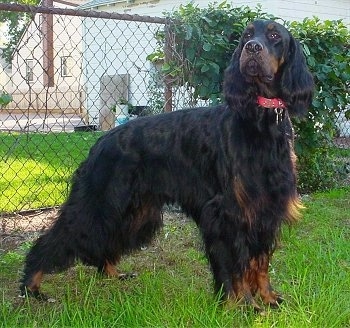 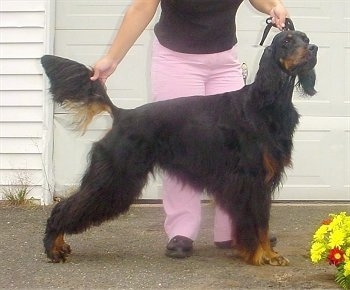 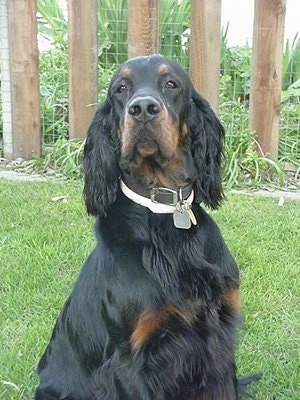 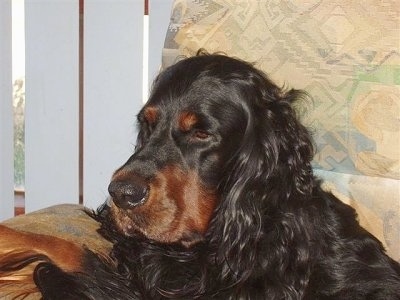