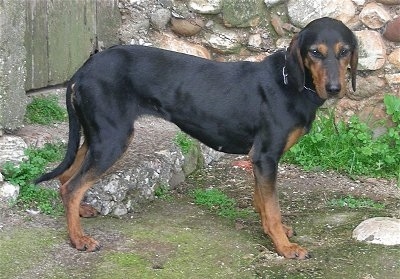 The Hellenikos Ichnilatis is of medium size and shaped by function rather than fashion. The breed is a prototypical hunter that uses its fine nose and high average speed to track and catch its prey. There are no extremes in its conformation: athletic, robust and of normal proportions, the Hellenikos Ichnilatis is slightly longer than tall, with taught skin and short, sleek hair. Predominately black with tan markings (there are no specific limitations as to the tan markings, apart from the fact that the color should be rich and discoloration is a very serious type fault); a small white spot is tolerated on the chest. The head is noble and houndy, but never coarse nor as heavy as a Bloodhound’s. The ears should lie flat and be neither too long nor too heavy. The nose and nails are black and the pigment should be dark and strong. The breed has a regular scissor bite and the eye rims should be tight, showing no haw.

Brave, outgoing, intelligent and sometimes impatient, this breed is a passionate hunter but it is never vicious. Friendly, affectionate and extremely playful. As a farm dog, it’s happy and useful in many ways, as it is not without a sense of boundaries and it will give voice in the presence of strangers or danger, relentlessly chasing vermin as well. Extremely courageous and resourceful, it possesses the stamina and cunning necessary to face a wild boar. However, in the presence of its master, it’s a happy and friendly fellow, wagging its tail and living peacefully with other dogs. Traditionally, the breed hunts in pairs or small groups of three or four dogs. They are surprisingly swift and powerful for their size. While essentially good-natured, this is an independent breed; young males are best raised by an experienced handler. Maturity comes late, usually at two or three years of age. The Hellenikos Ichnilatis has a beautiful and loud voice that can be heard for many miles. The breed gives voice on the chase and is fit to travel great distances on the gallop, capable of hunting independently if it has to, before turning the hare to its handler. This innate ability means that the breed has a strong temperament and it can be stubborn if it senses it owner is meek or passive. These dogs are slow at maturing. Rough handling makes them worse, as does lack of proper discipline; they need careful guidance, patience and understanding.

This breed has an excellent health record.

This is a natural breed that loves open spaces and can be a handful for the inexperienced dog owner. Certainly not a choice for the apartment dweller, this is an open-air breed that shows excellent manners when its needs are catered for.

The Hellenikos Ichnilatis requires a certain amount of freedom and plenty of exercise. This breed thrives on exercise, and if restricted tends to be destructive. It needs to be taken on a daily walk. While out on the walk make sure the dog heels beside or behind the person holding the lead, never in front, as instinct tells a dog the leader leads the way, and that leader needs to be the human.

The smooth, shorthaired coat is easy to keep in peak condition. Brush with a firm bristle brush, and dry shampoo occasionally. Bathe in mild soap only when necessary. Inspect the feet and mouth for damage after work or exercise sessions. Keep the nails trimmed. This breed is an average shedder.

The Hellenikos Ichnilatis is a black and tan hound, built for tracking and chasing hare that is indigenous to Greece. It has existed for thousands of years and its progenitors are the ancient laconikoi (later: lagonikoi, where lagos=hare) kynes (dogs) native in southern Greece (Peloponessus). These were described and praised by many ancient writers and through colonization and sea-trade they became widespread in the ancient world. Descendants of the ancient Greek scenthounds can be found all over Europe and beyond. In its country of origin the breed had no competition and due to its isolation in inaccessible and often mountainous areas the breed remained pure and little changed. Ancient Greece covered most of the Balkans and so the Hellenikos Ichnilatis left its heritage in the neighboring countries, too: black and tan or tricolor scenthounds can be found all over this area. In Greece too, there is a not-yet officially recognized tricolor variety, localized in the very same vicinity that the ancient breed took its first name, in Laconia (Sparta), a south-most part of Peloponessus. In 1996 the Hellenikos Ichnilatis became the first Greek breed recognized by the FCI. 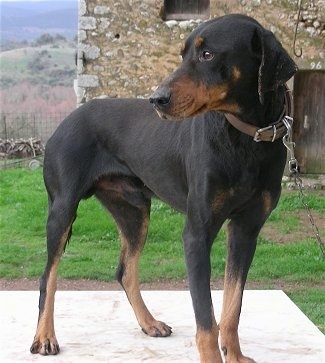 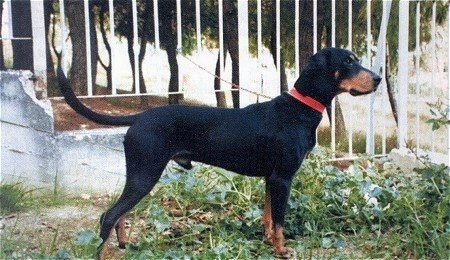 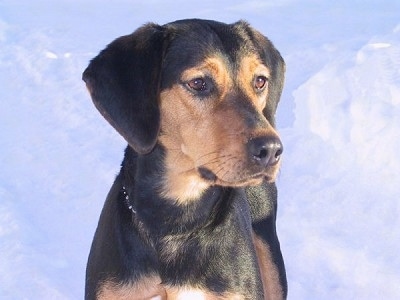 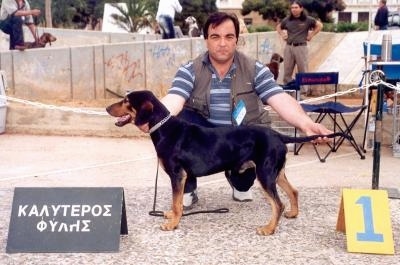