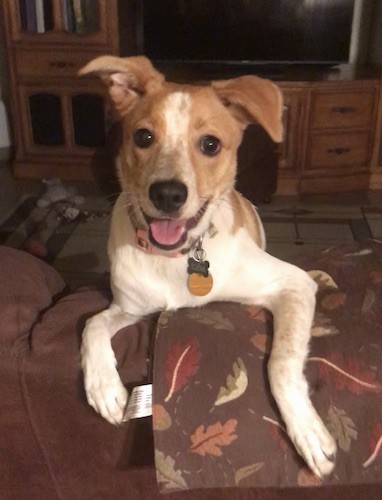 "This is Elena (Ellie). She was adopted at the Animal Care Services and 2 weeks later the previous owner abandoned her at only 2 months old. I found her and followed protocol taking her to the vet, finding out she was microchiped, finding out the owner didn’t want her and that’s when I became her forever mom. She is extremely smart. Fast learner, super easy to potty and crate train. As all other Jack-a-bee owners have said, I quickly realized Ellie was a little fur ball of energy. We go on walks daily of at least 1 mile, longer if possible. She sniffs EVERYTHING along the way. She does wonderful on car rides. I have decided not to give her plush toys anymore as she tears them up in less than an hour. She loves her stuffed and frozen Kong’s. She rather play than eat so enticing her with food or treats doesn’t always work. She has 5 sibling cats and seems to do ok most of the time with other dogs of any size. She loves people an is very friendly. Her bark sounds like a Beagle. She’s tall, slim and strong. I don’t know if it’s a breed thing but she can jump pretty high too. She loves rugged nature walks. She’s always happy and loving. She’s 8 months old in this picture."

The Jack-A-Bee is not a purebred dog. It is a cross between the Beagle and the Jack Russell Terrier. The best way to determine the temperament of a mixed breed is to look up all breeds in the cross and know you can get any combination of any of the characteristics found in either breed. Not all of these designer hybrid dogs being bred are 50% purebred to 50% purebred. It is very common for breeders to breed multi-generation crosses. 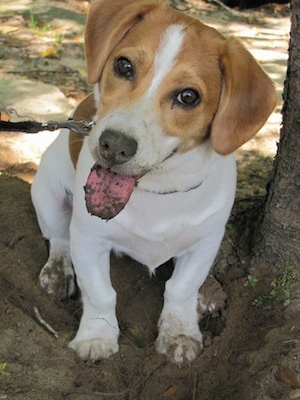 "Glasgow, a Jack-A-Bee is an energetic and smart puppy who learns tricks very easily. Originally from Georgia, this rescue is now living in Florida, and loves nothing more than going for walks, and chewing on his favorite toys. At eight months old in this picture, Glasgow is full of energy, but is starting to settle down a little from his early puppy months. He is a little cautious around people, and very cautious of other dogs, but has several dog friends he loves to play with."

"This is a photo of our new Jack-A-Bee. He's 10 weeks old in this picture. We've named him Chase, which one of us is doing any time he is awake. His mother is a Jack Russell and his father is a Beagle. He goes for a mile to a mile-and-a-half walk every day, as long as it doesn't rain. Everyone just loves him and you can see why." 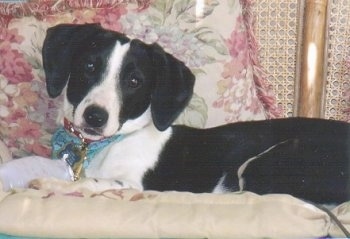 "This is my dog Jasper, a Jack Russell / Beagle cross. He is 10 ½ months old in this picture. He has been a joy to own. He is easy to train and is a very eager learner. I have never owned a more social dog. He loves children, other dogs (of all shapes and sizes) and cats. In fact, he even helped raise an orphan kitten. Jasper and the kitten Frankie are the best of friends. He is a great apartment dog; he's quiet and a small size without being too small, about 22 lbs. Though when he does bark it sounds a little Beagle-y, but without the bay. He does have quite a bit of energy but settles down nicely in the house. He is a big cuddle bug and wants to be with you at all times. This dog can jump!!!! I think he looks more Jack Russell, mostly because his tail was docked. His ears are longer then a Jack Russell but not as long as a Beagle and they are pointed at the tips. This is a big dog in a little dog’s body." "This is Dewey, our great little Jack Russell / Beagle mix, according to our vet Dr. Dave. He is four years old, and we got him from our local Human Society. He's friendly to all, and loves long walks, chasing geckos and visiting his grandmother on Cape Cod."

Jack-A-Bee puppies at 2 weeks old—"I was a Jack-A-Bee breeder and whenever people would contact me and inquire as to breed information I shared your site. I have attached pictures of our first (and last) ACHC-registered litter born to our Beagle mom (Missy) and Jack Russell dad (Bolin). Our previous litters were born to our Jack-A-Bee mom (Alley). I have always had great reports back on housetraining and training in general. It is true that you have to be ready for either end of the personality spectrum but even by 8 weeks you can really tell a lot about a pup's personality. When considering a hybrid, the people who have been in contact with the puppy for its first weeks of life should have some good insight as to what side the pup is leaning toward. I have noticed that the physical characteristics of the puppy also seem to be an indicator of the personality type (but not always, so be careful). Either way, anyone considering a dog that has Jack Russell in the bloodline should be prepared for a usually very active and sometimes a demanding dog (just in case). The rewards make it all worthwhile in the long run, though! Smart, playful, loving and cute! I wouldn't change my pups for the world." 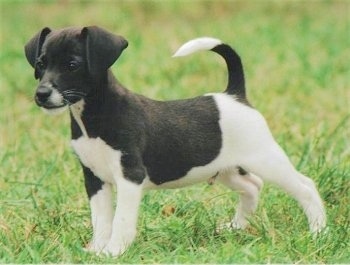 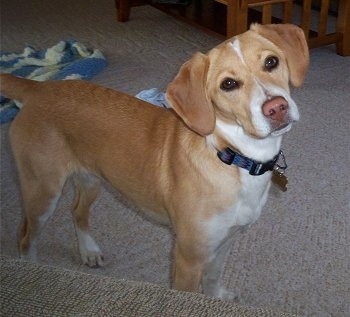 "This is Jazz. She is a Jack-A-Bee. We got her from a breeder that breeds pure Beagles and pure Jack Russells, so she is 50-50. She is the best dog that I have ever owned. Very energetic with a great personality. So energetic, in fact, that she keeps up with me at a pace of 15 mph for 20 miles at a time. I ran her 1600 miles last summer and she loved it. She is also a very avid swimmer, hole digger, rabbit and small animal chaser and very loving with our son who is almost the same age as her (1 ½). I would recommend her to anyone who has small children and is active with the outdoors." 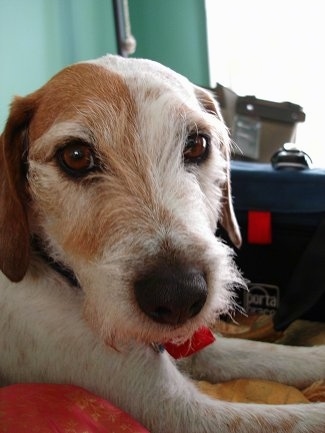 "Bruiser the Jack-A-Bee at 6 years old—his mom is a Beagle (Jackie Brown) and his dad a Jack Russell (Simon), who was a stand in for Wishbone on Nickelodeon! We love his crazy personality—enjoy" 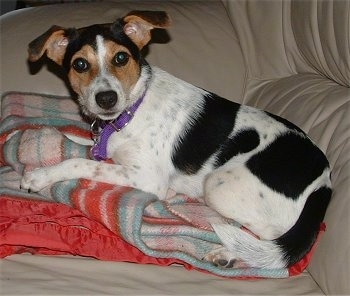 Hanna the 10-month-old Jack-A-Bee—"She is the sweetest dog ever. Plenty of energy, but a GREAT housedog. I would never trade her for a purebred!" 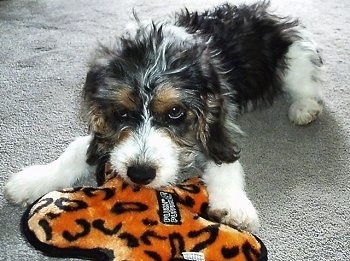 Morris the Jack-A-Bee puppy (Jack Russell / Beagle mix breed dog) at three months old—"He's incredibly intelligent, loves puppy school, is already almost completely housebroken and crate trained, knows how to sit, come when called and lie down. He loves his walk, and riding in the car."

See more examples of the Jack-A-Bee