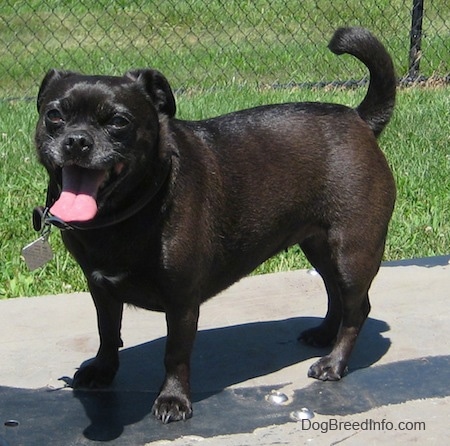 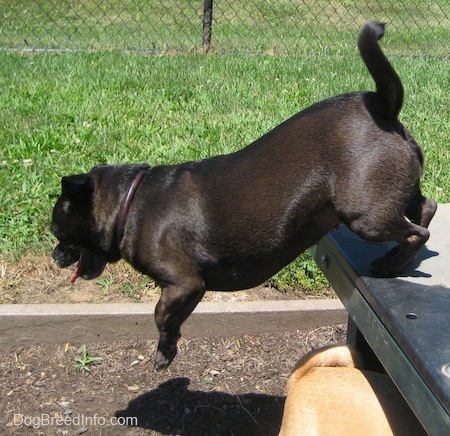 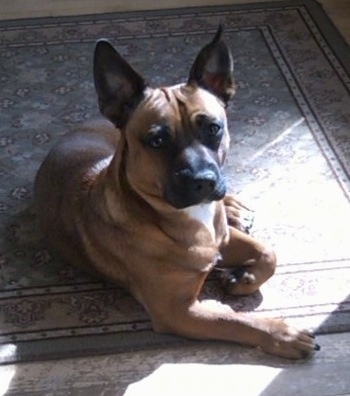 "Rufio the Jug at 6 months old  (Jack Russell and Pug mix) the lady down the street who runs a barn had two litters, both were oops. His mother is a Jack Russell and his father is a Pug. He loves his family, kids, cats, and other dogs. He likes to play a lot. His favorite toys are his ball, rope, squeak toy “Ducky” and “Teddy.” He also likes to chew his nylon bone, play with our 9-year-old black Lab, find critters outside and snuggle on the couch." 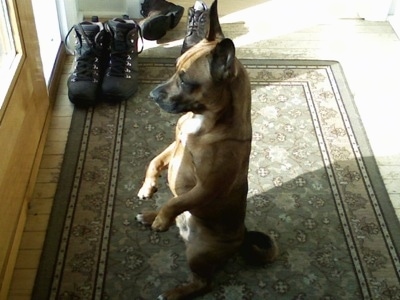 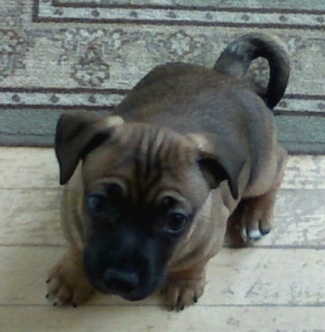 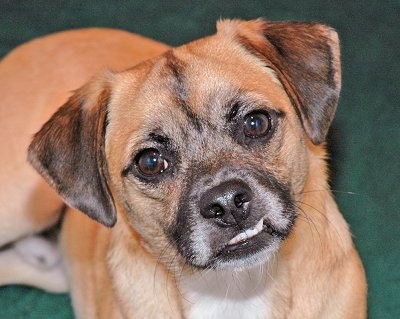 Scooter the Jug (Jack Russell / Pug hybrid) at about 1 year old—"I was very surprised this evening when, just on an off chance, I searched "Jack Russell Pug" mixed breed. To my astonishment, I came across the "Jug" on your site. My wife and I thought we were making up something new when we settled on what we thought was an original name of "Jug" for our little boy. Our first thought was "Rug" for Russell / Pug, but soon decided on Jug instead. Shortly thereafter, I expanded the name to better describe our boy and make the name sound even more off the wall. When someone asks what kind of dog he is, we say he is a "Hook-tailed, snaggle-toothed Jug."" 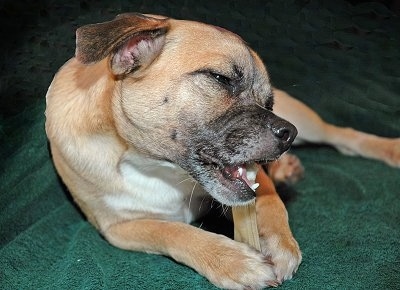 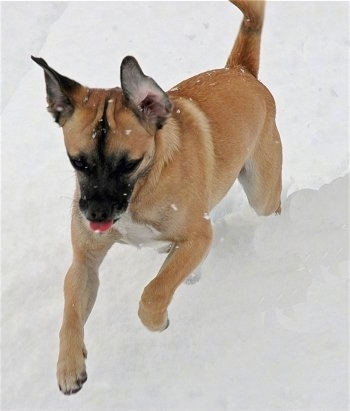 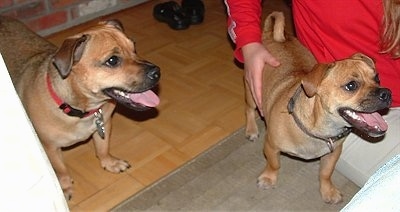 Jugs (Pug / Jack Russell mix) Loki and Dante—"This is Loki (red collar) and Dante (brown collar). Loki is 2 years old and Dante is 1 year old in these pictures. Loki weighs about 28 lbs. and Dante weighs about 20 lbs. We call Dante “Loki’s Mini Me.” Loki is from a Humane Society in Richmond, VA. Dante was bought from a pet store then given up by the owner after only a couple of months. These two dogs get along great and love playing together for hours on end. They both have the energy of a Jack Russell, but they also can calm down and cuddle like a Pug. They especially love sleeping under the covers with their heads on the pillow. The one unfortunate thing about these two dogs is that they both have hip dysplasia and will need surgery in the future, but it doesn’t slow them down." 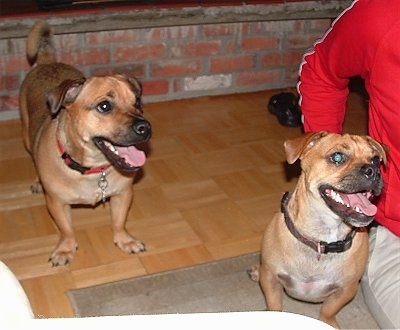 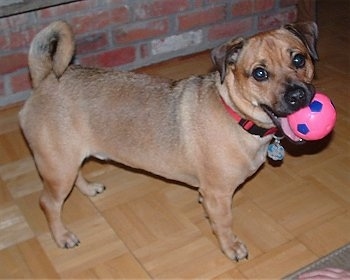 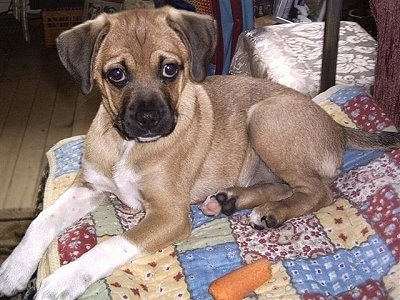 TugBoat Ory aka Tug the little brown Jug (Jack Russell / Pug mix) at 13 weeks old—"He is seen here with one of his favorite snacks...baby carrots!!! Tug lives with me and "Millicent Perdida" (Millie), a six-year-old Toy Fox Terrier. He has been a wonderful addition to our household for both Millie and me. Tug is entertaining and affectionate, not the least bit hyper or aggressive. He does, however, live up to his name. He is somewhat larger than Millie and enjoys the fact that he is able to "tug" her around the house by her collar. She doesn't seem to mind, though and usually outlasts him during their play time. Tug is quick to learn and eager to please." 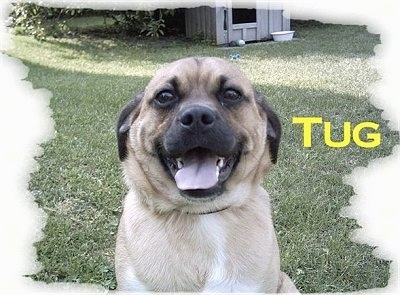 Tug (the Jug) in the backyard at 11 months of age. Full name: TugBoat Ory 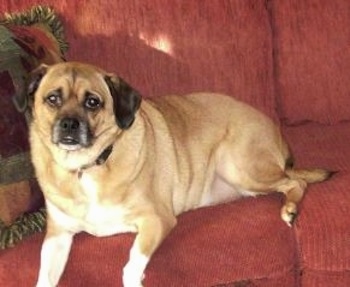 Tug (TugBoat Ory) at 5 years old—"This is Tug at 5 years of age. He has been a very good, well behaved dog and I would still recommend a Jug to anyone. We just thought you might like seeing him from his puppy pictures to being completely mature. He is my joy!!!" 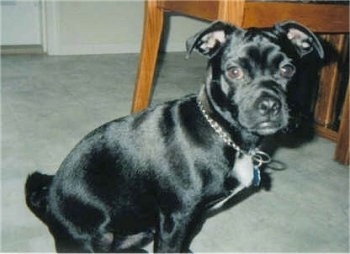 "Luda (short for Ludacrisp) is 1 yaer old in this pic. He is a ball of energy and has perfected the Jack Russell personality to a T. Luda has a strong persona and is deeply adored by many people!" 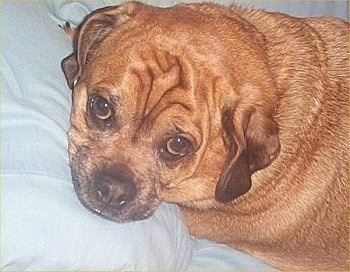 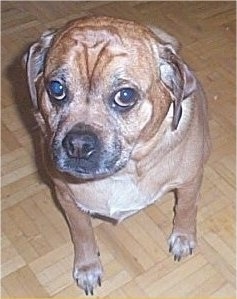 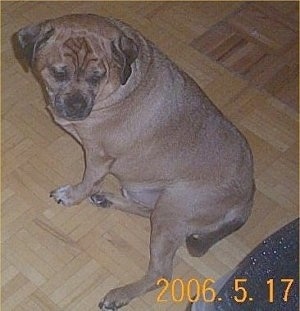 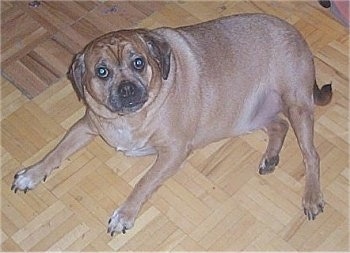