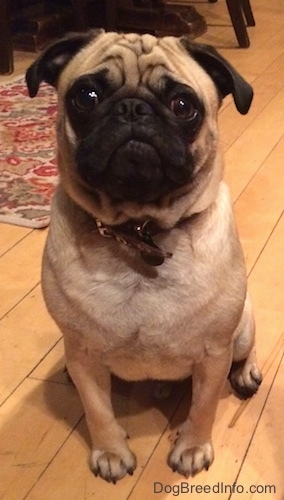 Hector the Pug waiting for a treat.

The Pug is a small, stocky, square, thickset dog. The round head is massive with a short, blunt, square-shaped muzzle. Moles on the cheeks are considered beauty spots. The teeth meet in a slight undershot bite. The very large, prominent eyes are dark. The small, thin ears are either rose or button shaped. The face has large, deep wrinkles. The high-set tail is curled over the back and a double curl is preferred in the show ring. Dewclaws are usually removed. The short coat is soft, fine and smooth. Coat colors come in apricot, fawn, black and silver.

The Pug is keen, with a happy-go-lucky attitude. Animated, peppy and spirited, it is loyal, loving and affectionate with its family. Playful, lively and rambunctious, it is sure to keep you laughing. Highly intelligent, it bores easily without variety in its training. These dogs can be a bit willful if they sense they are stronger minded than the humans around them. Pugs are sensitive to the tone of your voice, so harsh punishment is unnecessary. They need an owner who is calm, yet firm, confident and consistent with the rules. This dog is neither excitable nor dull. They are good watchdogs, very devoted and are not yappers. Pugs get along well with other dogs and pets, and they behave impeccably with both children and visitors. Be sure to be your Pug's pack leader. Pugs that do not have strong human leaders can become jealous, and begin to display guarding behaviors, such as guarding furniture, food, toys, or other spots in the house. This behavior only happens when dogs are allowed to take over. These behaviors can be corrected when the owners start displaying the proper leadership. Dogs that feel they need to run the home are not as happy as dogs that know they are the human’s followers, as it is very stressful for a dog to need to keep "its" humans in line.

Pugs catch colds easily and are stressed by hot and cold weather. They are prone to allergies and the short muzzle contributes to chronic breathing problems, making the Pug tend to wheeze and snore. (Pugs suffer from poor ventilation.) Prone to skin problems. Prone to mast cell tumors. Prone to Pug Dog Encephalitis (PDE), an inflammation of the brain that strikes adolescent Pugs usually between the ages of 2 and 3. The cause is unknown. They are not the easiest whelpers. Dams usually have to have cesarean sections due to the size of the pups’ heads. There is a chance of Keratitis (inflammation of the cornea) and ulcers on the cornea. Eyes are prone to weeping and cherry eye. Do not overfeed a Pug, as they will eat more than is good for them, quickly becoming obese and living much shorter lives.

The Pug is good for apartment life. It is relatively inactive indoors and will do okay without a yard. Cannot withstand hot or cold weather and should be kept indoors at a comfortable temperature.

Pugs are strong dogs with short, straight legs. They need to be taken on daily walks. While out on the walk the dog must be made to heel beside or behind the person holding the lead, as instinct tells a dog the leader leads the way, and that leader needs to be the human. They enjoy energetic games and will keep in better health if given regular exercise. But be careful not to overdo it, especially if you see them start to wheeze.

The smooth, shorthaired coat is easy to groom. Brush and comb with a firm bristle brush and shampoo only when necessary. Dry thoroughly after a bath so the dog does not get chilled. The creases on the face must be cleaned regularly. This breed is an above average shedder.

The Pug is one of the oldest breeds known today, believed to have originated before 400 BC. There is somewhat of a debate over the origin of the Pug. Most researchers agree that the Pug originated from Asia, descended from a shorthaired Pekingese. Another theory is that it is the result of crossing a small Bulldog, while others speculate that it is a miniature form of the French Mastiff ( Dogue de Bordeaux). The artist Hogarth had a Pug named "Trump" that he often depicted in his works. The breed became popular during Victorian times in the 19th century. Tibetan monasteries kept Pugs as pets. The breed made its way to Japan and Europe, where it not only became a pet of royalty but the official dog of the House of Orange in Holland. Prince William II owned Pugs. One dog in particular was said to have saved his life in 1572 at Hermingny, when the dog barked at approaching Spaniards alerting him of their presence. In France, Napoleon's wife Josephine had a Pug named Fortune. On their wedding night, when Napoleon refused to allow the dog to sleep in their bed, Josephine told him, "If the Pug does not sleep in our bed, neither do I!" When Josephine was sent to prison she used the little dog to send secret messages to her husband by placing a note under the collar of her Pug. In 1860 when the British took over the Chinese Imperial Palace, they discovered several Pugs and Pekingese, and the dogs were brought back to England with them. The AKC recognized the Pug in 1885. Some of the Pug's talents include: watchdog and performing tricks. 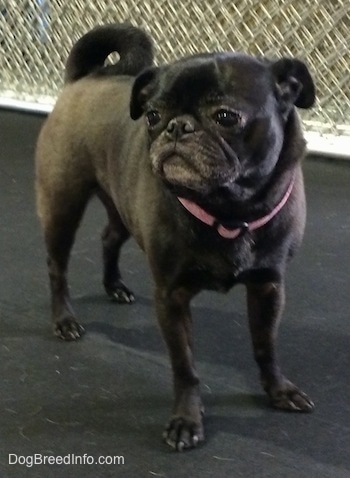 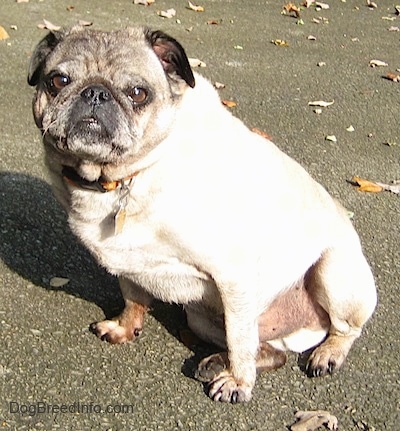 Max the Pug at 8 years old 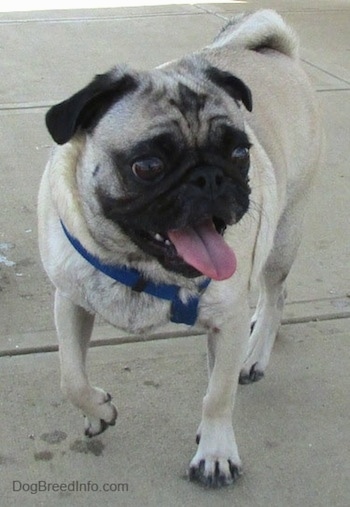 Dexter the Pug at 2 years old 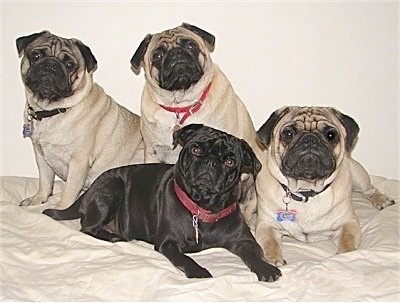 "This is a photo of my four Pugs. My Pugs: Duffer (3), Zoe' (2), Abby (2) and Frankie (1) absolutely love the camera. They will pose for me anytime I want. Duffer and Zoe', the two in the back, are Frankie's parents...Abby is the black Pug. They are very energetic, playful and very loving. Duffer sings and dances and they all love the water." 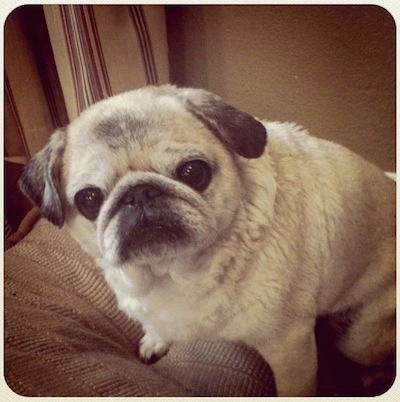 "This is my sweet girl Shelby shown here at 10 years old. We actually chose a Pug after taking the Dog Breed Quiz on this website over 10 years ago and she has turned out to be a wonderful addition to the family. We had her spayed as a puppy and she's always had a mellow temperament, loves other dogs, cats and people. Right from the beginning I kennel trained her and, rather than yell, I chose to use a water bottle to give her a quick squirt when she was a puppy and biting everyone (more like a cute nibble, but I didn't want any bad habits forming!). She knows how to sit, shake, go to bed and knows many words like "come," "go for a ride/walk" and her favorite: "treat." One thing that surprised me was how much she sheds—it's year ’round and constant. Once I realized, I trained her to not jump on the furniture (water bottle worked great for that, too!) and we actually avoid clothes such as black fleece that show every speck of white fur and no amount of roller tape seems to remove!" 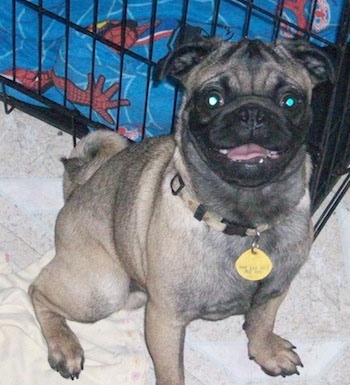 "This is Rebel shown here at 1 year old. He is a little different than the standard fawn and black Pug because he has a smoky "stripe" down his back and stomach. He is my little lap warmer, but don't let size fool you, he can hold his own with the big dogs (I foster Pit Bulls) and most of the time he's the leader when it comes to them. He just got a 6-week-old "sister," a Doxie named Maya, and he protects her from the cats. I love him so much! I have watched the Dog Whisperer and have used some of the tips I learned from Cesar in training my little man to be the perfect gentleman. I plan to use some of the tips I have learned to train my Doxie Maya too!" 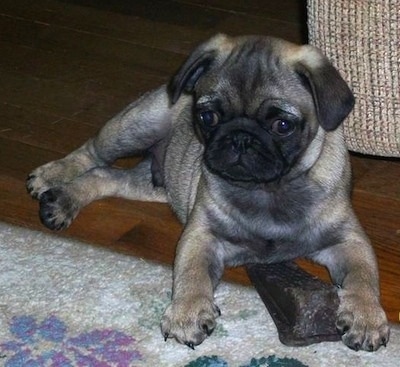 Rebel the fawn and black Pug puppy at 9 weeks old 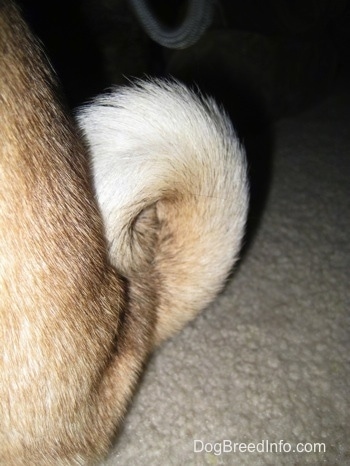 The curly tail of a Pug 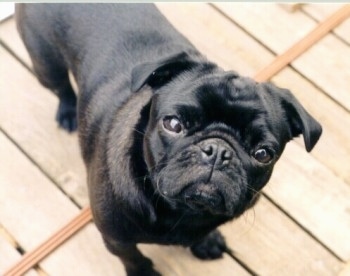 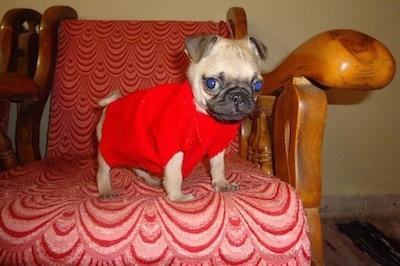 See more examples of the Pug