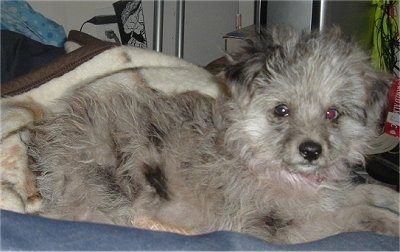 The Miniature Aussiedoodle is not a purebred dog. It is a cross between the Miniature Australian Shepherd and the Poodle. The best way to determine the temperament of a mixed breed is to look up all breeds in the cross and know you can get any combination of any of the characteristics found in either breed. Not all of these designer hybrid dogs being bred are 50% purebred to 50% purebred. It is very common for breeders to breed multi-generation crosses. 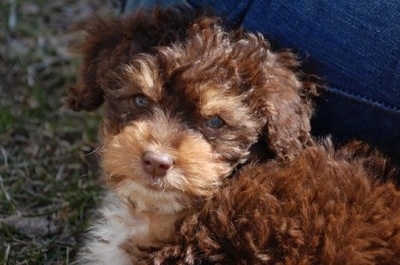 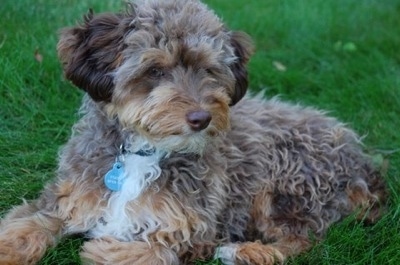 "Fozzy, a Toy Aussiepoo shown here at 8 months old, weighing in at 12 pounds. These two pics are a good example of the puppy coat changing to the adult coat." 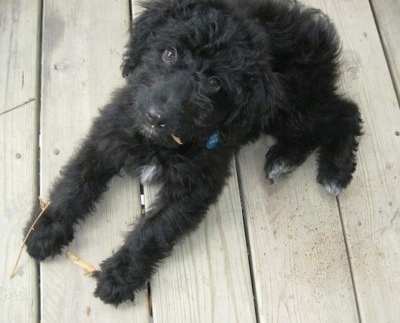 "Josie is a Mini Aussiedoodle, shown here as a 2-month-old puppy. Her mother was a 60-pound Standard Poodle, and her father was a 16-pound Miniature Australian Shepherd. She is the smartest, sweetest girl. She was practically house rained at ten weeks, and we've bell-trained her in the house; she rings the bells on the door whenever she needs to go outside. She learns tricks very quickly—we like to pretend to shoot her "bang bang!" and she plays dead. She likes to eat bumblebees and things that float (she just jumps straight up and snatches them out of the air), sometimes the closed captions on the television. She's great with children and other dogs, isn't the least bit aggressive, doesn't bark. She is very protective in a warning-type way, she will growl if she hears someone outside our apartment and give a warning bark if she hears a strange noise, but only one bark. Everyone always mistakes her for a Portuguese Water Dog." 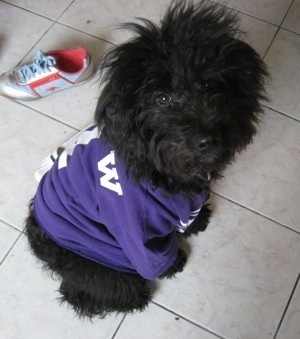 "Josie, my Mini Aussiedoodle watching me cook breakfast—she has a T-shirt on because she just got spayed and kept licking at the stitches."